When it comes to vape pens, Joyetech just loves the concept of the all-in-one. That’s a great selling point because vaping beginners don’t want to get much into electricity science, they simply want to know what the good vaping is all about. But, at the same time, in most of the AIO vapes, you literally can’t change something you don’t like. You just have to use what they give you in the kit – no more, no less. Joyetech figured that it was time for some revolution in entry-level devices and released the Exceed D19 vape pen with two coil heads, adjustable airflow, and 510 connector.

Getting To Know the Joyetech Exceed D19

As for design, you won’t find anything outstanding here. Joyetech keeps on producing typical tube mods with a sleek, seamless look that represents an all-in-one concept. The range of mod colors is pretty basic – there’s a shiny, brushed stainless steel, black, white, dark orange, black-and-white gradient color options. I like that the unit is made of metal, instead of cheap plastic. And thanks to its size, you can literally hide the whole vape pen in the palm of your hand.

The Kit, as I already mentioned before, packs something more than a typical AIO vape pen. Let’s check it out. 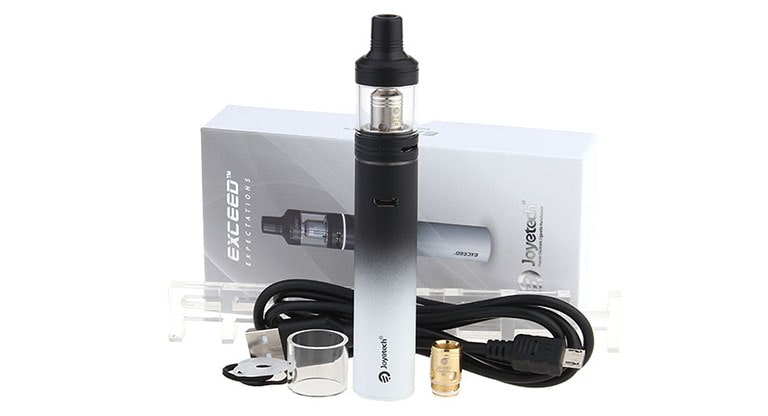 I liked the fact that they give a choice of the vaping styles, meanwhile providing simplicity of the vape pen build. The Exceed D19 has two operating modes and only one button! You can see what mode you’re currently using with the help of an LED indicator ring underneath the tank. On the bottom of the device, you can see a venting hole for the battery, which ensures it won’t overheat. They also included a small chipset inside to protect the unit from overcharging (and exploding), over discharging, and overcurrent.

The Exceed D19 tank can contain 2 ml of an e-juice. Thanks to the medium holes in a coil head your e-liquid won’t run out too fast, meanwhile bringing more than satisfying vaping experience.

The firing button is nice and big enough. It protrudes a little bit of the surface. Along with the rubbery and durable coating, it feels quite clicky and easy to operate. There’s a USB port on the other side near the button. In my opinion, it would be more convenient to place it in the lower part of the mod, making sure that it won’t accidentally fall when charging.

The airflow valves have a unique design that I’ve never seen before. From one side they placed a steel lid with three holes, and on the other side of the circle, there’s an open lid, which you can turn and close to the preferred level. The holes section is designed for MTL vaping, and the more opened one – for the DL. Although, nothing can stop you from experimenting with those two. I’ve tried, and you can see what happened a section below.

How To Customize the Joyetech Exceed D19 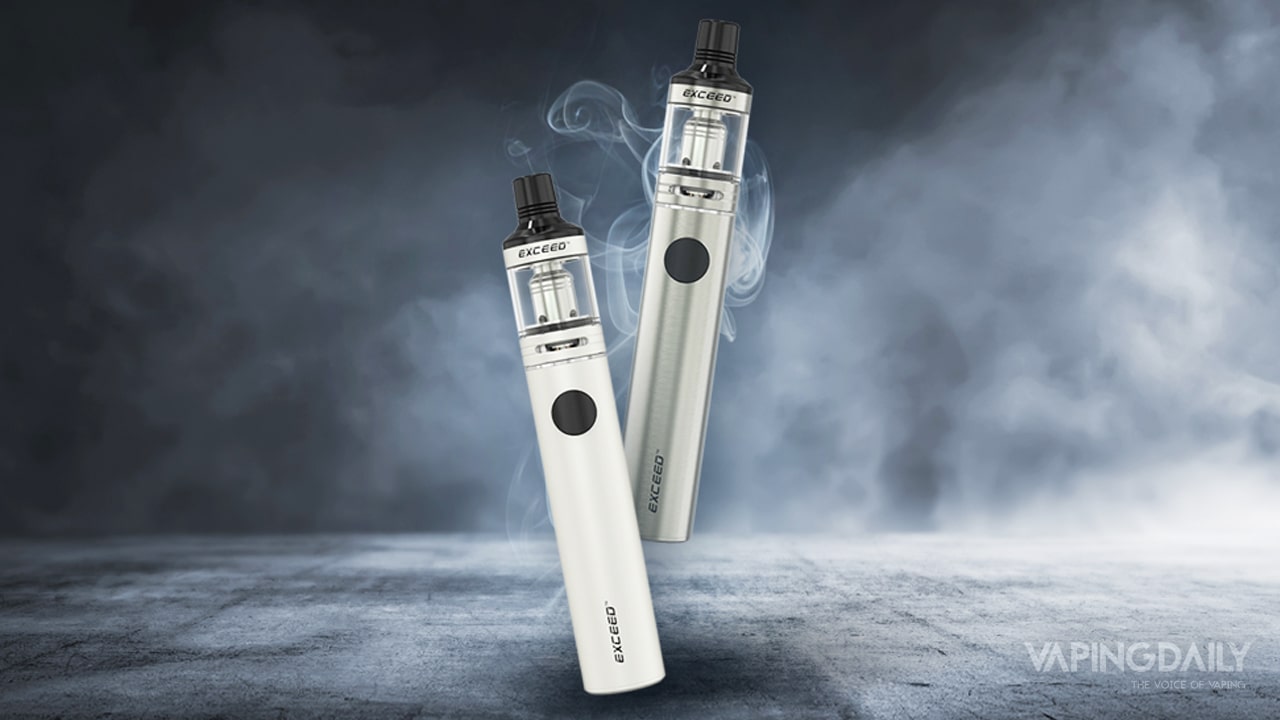 One of the main selling points of the Exceed D19 is the ability to swap two slightly different operating modes. What you can change is a voltage level and thus, have a more or less powerful vapor production. So, the options that you get:

When the indicator LED ring starts to flash it means that the battery is slowly discharging. The faster it blinks – the more it is discharged.

Here Are Some Other Exciting Features of the Exceed D19

The pre-installed Exceed D19 tank has a top-filling system. With a special, donut-like holes, the e-juice refilling becomes the easiest thing to do. The drip tip screws on and unscrews easily. Although, it was a little disappointment for me that it was made of plastic. Good news is that I didn’t notice any leaking whatsoever. I walked around with an Exceed D19 in my pocket, in my bag, it was lying on its side on the table. No leaking at all! 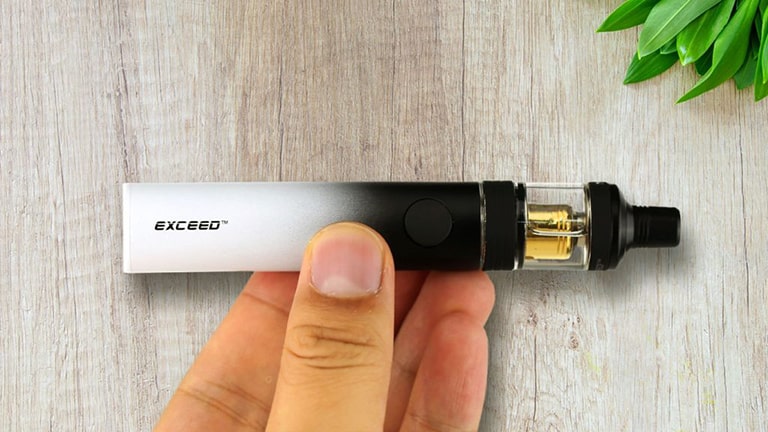 I decided to start with a mouth-to-lung coil, which is designed with a 1.2 Ohm resistance. According to the official website of Joyetech, it works with an 8-14 wattage level and is best at 12W. I first thought it was a little bit too low for me, as I am used to much higher wattage settings. So I set the direct output mode to not overheat the coil and get the best of its capabilities.

So, on this mode, I didn’t get huge plumes of vapor. The draw was quite restricted, much like a cigarette draw. I liked that because of the throat hit it delivered. And the flavor was pretty fine, but not warm enough, to my taste. I think this coil is a good option for ex-smokers, certainly the ideal one for nicotine e-liquids best performance.

On the other side, you have a chance to try not the ex-smokers world, but a vaper’s world. This is a whole new territory for someone who’s been familiar with smoking for quite a bit of time. This is a different experience. When I put the DL 0.5 Ohm coil inside the Exceed tank, I didn’t expect much, to be honest. There are a lot of advanced vaping devices on the market, and usually, entry-level vape pens can’t compete with those. I switched to constant voltage mode and took a nice, very very long drag, inhaling it right into my lungs.

I must admit, that the draw was effortless, but still, just a little bit restricted to the acceptable point, making it easy to inhale loads of vapor. With a too wide mouthpiece and too airy draw of the SMOK Stick V8, for example, I couldn’t inhale a lot. And the vapor cloud was seriously huge. I was pleasantly surprised with the amount of vapor. As for the taste, I found it tasty enough, but less than it was in an MTL hit. Probably, that was because the vapor passed all the taste buds in my mouth on its direct way to the lungs.

I already wrote about the SMOK Stick V8 up top, and there are also a few interesting details to mention. The V8 has a 3000 mAh battery, comparing to 1500 mAh of the Exceed. Meanwhile, the Exceed is smaller and stealthier. The Smok Stick V8 has all those fancy rainbow chromatic styles, which is less boring than the black-and-white world of the Joyetech. But given all that, I admire the Exceed D19 customization abilities more.

Do We Recommend It?

The Joyetech Exceed D19 is a bargain for someone who wants to start his vaping journey and try different vaping models. You buy one simple device, and you get much more than just a traditional AIO vape pen. You can instantaneously choose between small, intense hits and long, smooth ones. Even though, to do this, you’ll have to vape down all your e-juice left in the tank. The build is durable and smart. And all that beauty sells for nearly $20, which I think is awesome.