Anyone who’s a middle child or has two other siblings can understand the difficulties that come with having two other people in the world similar to you. There are some things you share, and there is something you don’t; it’s natural.

The Aspire K series follows those same parameters. The K Series, consisting of a K2, K3, and a K4 model is at first, meant to be starter kits, with lower battery power and smaller tanks and fewer features and a more straightforward interface. 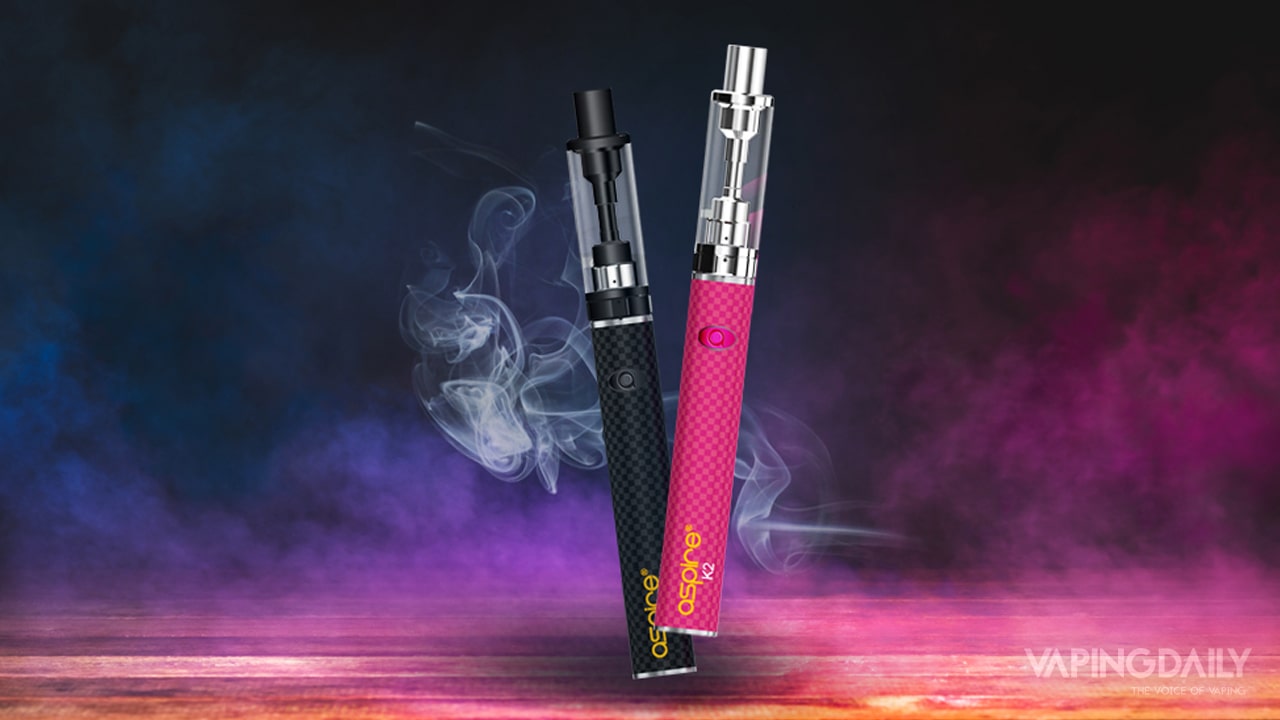 But once you get to the big brother (or sister), the K4, then you are truly immersed in the vaping world. The K4 offers a 2000 mAh battery, a 3.5ml Cleito tank with Clapton coils inside and a Delrin drip tip – all these things being standard specs for those who speak vaping parlance.

I wasn’t able to get my hands on a K4, however, so for this review, I’ll be taking a look at the K2 and the K3 series and compare and contrast accordingly.

What you receive in either the K2 or the K3 is the same, save for the different technical specs of the K3 from the K2. So, when you open the box you see:

The color schemes are what immediately jumps out at you when you first see the K2. The dimensions of the K2 and K3 are not that dissimilar, with only a few millimeters of difference regarding height and width.

The K Series comes in either a hot pink or a deep black color. And the carbon fiber finish gives the mod a very stylish gloss, in either color, so this is probably not a discrete mod for stealth vaping.

Although being a starter kit, the K2 has some impressive technical specs that do give it an edge over other starter kits. An airflow valve for example, or the BVC (bottom vertical coils) coils in the atomizer, as well as pass-through charging. The drip tip also comes off very quickly should you want to swap it out with another one.

Some of the other notable features between the K2 and K3:

For the K2 I decided to go with an even 50/50 PG/VG content in my juice so I put in a Butterscotch Ripple that I got from Dominant Vapor. Even splits between PG/VG are best for above ohm vaping so you get a good mix of flavor and cloud production.

The tank on the K2 is a bottom fill tank, which, after screwing off the atomizer base, was a little bit of a hassle to fill. The small amount of space between the chimney and the rest of the tank left no room for error (literally), so there was a high potential for spillage, so it would have been a better idea to make a top fill tank.

I filled about half the tank and thanks to the see-through glass tank, you can always check your e-juice levels. I let the wick get soaked for about ten minutes, but I think it would have been better to prime the coil first.

There are at least four or five airflow valves that are not adjustable, but by experimenting with inhalation, I found that I could get a direct lung hit as well. If you put your fingers over some of the valves as well, it did get a little tighter.

The draw was surprisingly tight, but not too much, even with those airflow valves, and I was impressed with the nominally sized clouds I was making. The K3, of course, did perform about as well as its baby brother (or sister). The K3 has the bigger battery, so it did last a little longer, about the whole day for me.

Brother to Brother (or Sister to Sister)

The two models, the K2 and K3, have more in common than they have differences. The only real difference that matters is the battery, of which the K3 has a more powerful one at 1200mAh. But other than that, it was hard to find differences.

The K2 and K3 both deliver great flavor and cloud production. You had the possibility of mouth-to-lung and direct lung hits for both modes. They both have above ohm coils, and the batteries have universal 510 threading.

They both share airflow valves, they both had bottom fill tanks, and despite the tank size difference, you could still vape for at least a full day before you had to refill it again. So I do not see much to differentiate the two, other than the battery capacity.

The K2 and K3 are great starter kits (we’ll save the K4 for another day). They both feature easy to use components that disassemble and come together very easily. The tanks are a little tricky to fill, but not impossible. The coils can last for about 3 to 4 weeks, and charging takes less than I expected (about an hour and a half).