The VooPoo Mojo is a compact, ergonomic mod device that has an integrated, non-removable 2600mAh battery. The device comes paired with the UForce sub-ohm tank that has a 3.5ml e-liquid capacity and uses dual-core 0.4ohm atomizer heads.

There is a small 0.96-inch OLED screen on the side of the mod that allows users to control the unit’s vaping outputs. This mod comes outfitted with the GENE.FAN chipset that lets vapers choose from power mode or temperature control. There are two side adjustment buttons on the mod’s zinc alloy chassis, and the main power/firing button sits above the screen.

The VooPoo Mojo mod got my attention right away. Looking at it, I was impressed with the clean, sharp lines of the device’s exterior, not to mention the recessed crevices on the side that were a welcome change from the flat-sided Drag and Drag 2. Those devices took advantage of their boxy form factor to put some funky-looking resin side panels that were a massive boost to their likability. 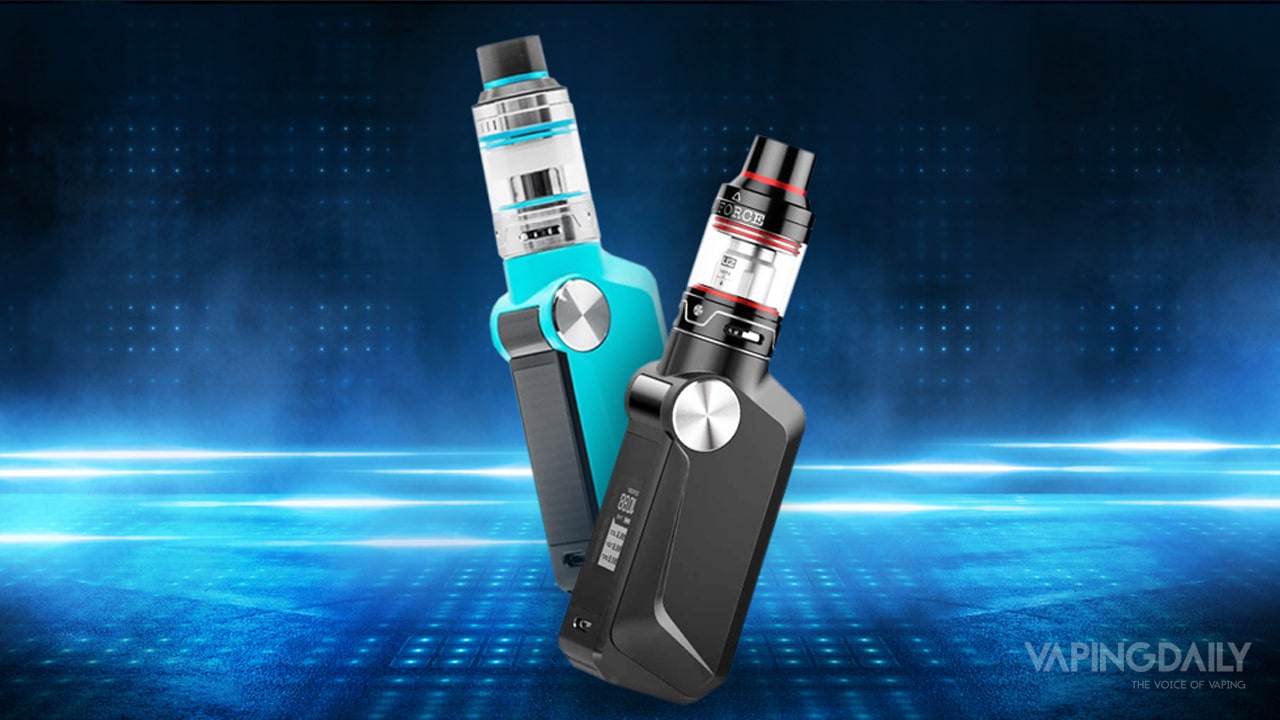 The Mojo has an internal, 2600mAh battery, so there is no need to install or remove cells. Mods with removable batteries have several advantages, and those without them have some significant disadvantages, but for once, I was glad to use a sub-ohm mod without having to worry about the stability or security of the battery door.

Of course, if the Mojo battery were ever to conk out, then that would be unfortunate. Fortunately, the Mojo has the GENE.FAN chipset inside, like most of VooPoo’s flagship devices like the two mentioned above. The chipset has several protections, like overcharge, and short-circuit protection, while also making the firing time super-fast (10 milliseconds, “the world’s fastest firing time” according to VooPoo). 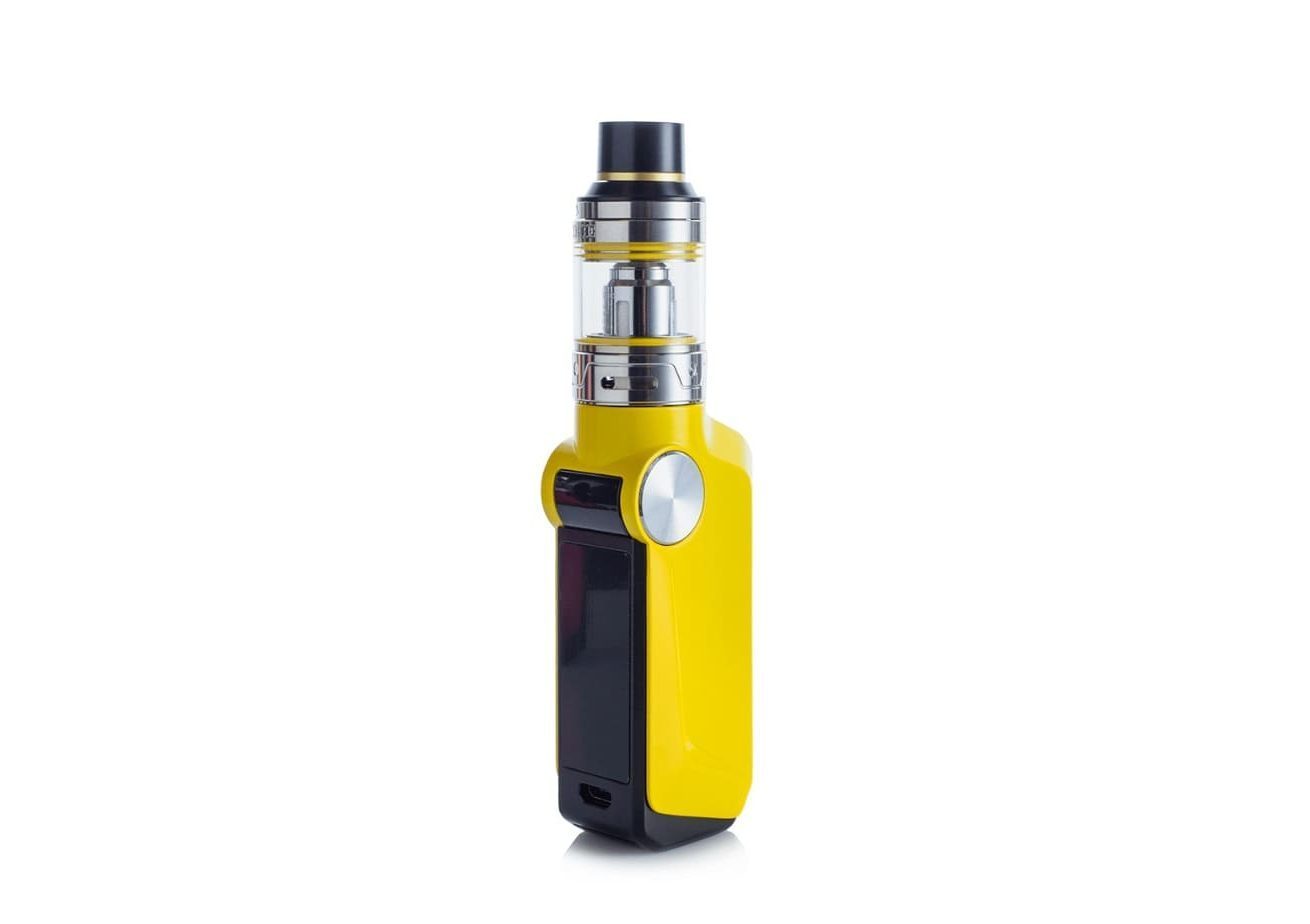 The GENE.FAN chipset inside also means that the screen setup and menu design are also the same as those other VooPoo units, so there’s not anything new you have to learn to access the device’s vaping features. I can’t mention how much I like the Mojo’s exterior. It has a great, non-glossy paint job that won’t get stained with fingerprints.

The zinc alloy construction feels lightweight, and the size of the unit makes it fit perfectly in my hand. Without the UFORCE tank attached (more on the UFORCE later) the mod stands at 82mm or 3.2 inches, which is tiny in box mod measurements. The width is also minimal at something just wider than 27mm or just over 1 inch across. 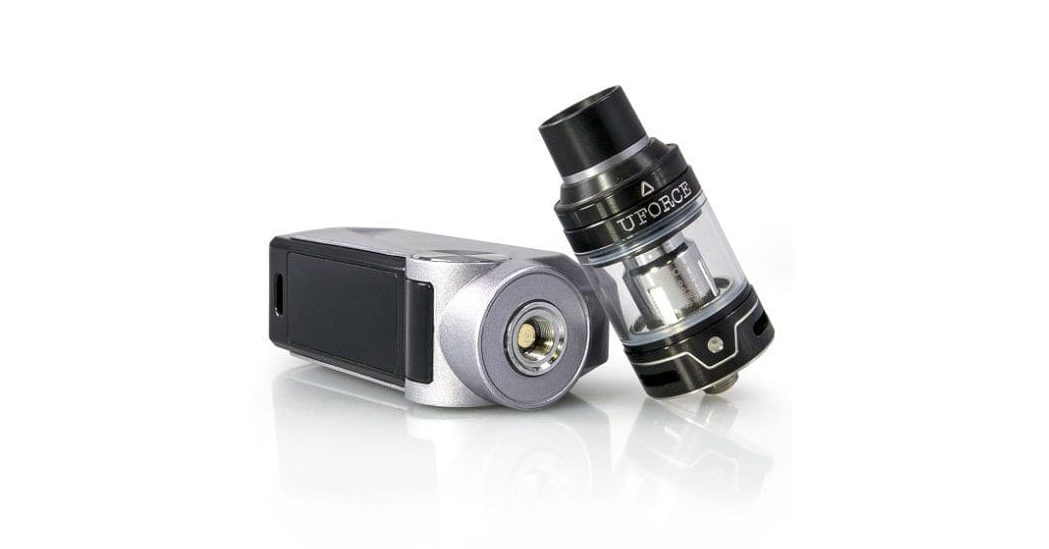 Going up, the mod does taper out a little to fit the 24.6mm in diameter UFORCE tank on the gold-plated, spring-loaded 510 connection up top, which sits above the rest of the mod’s build. It’s a nice design touch, but anything over 27mm in diameter. The OLED screen is also well-placed, but that is the one part of the mod that can get littered with fingerprints, as it is a little glossy. 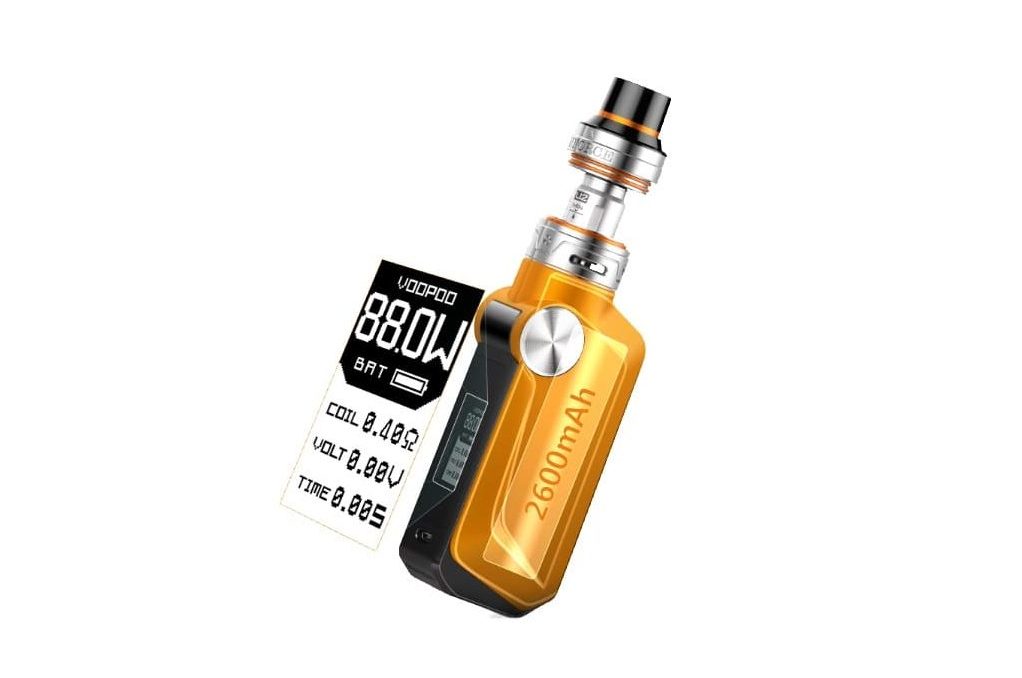 The brightness of the screen lacked also, and there was no way to increase it via the menu options. Despite the dim screen, the control panel configuration was another thing I liked. The two silver circles on either side of the chassis not only add to the mod’s appearance, but they are also the up/down adjustment buttons. Their position makes holding and using the mod that much easier, as the firing button sits right above the screen. The firing button is large and is very easy to access when the mod is in your hand.

Getting the Mojo to Work

As I mentioned above, the GENE.FAN chipset keeps the same menu configuration, as well as the vaping options, like any other VooPoo mod. The mod takes five clicks to activate, and moving through each of the screens was not difficult. The information – despite the screen being a little dark – on the main screen includes the wattage, resistance, voltage, and a timer.

Moving in between power mode and temperature control takes only three clicks, which cycles through nickel, stainless steel, and titanium. You can also switch between Celcius and Fahrenheit, but you have to go all the way to the lowest level – 200F or 100C – and then press down again to make the switch. That’s a little inconvenient, but the speed with which you can move between variables makes up for that minor flaw.

Hidden within the recesses of the chipset’s five memory settings (one for each wire material: stainless steel, titanium, and nickel) are the device’s power curve settings. Don’t get me wrong, I love custom curve settings, but I’m not a fan of the fact that it is buried in the memory settings, which, I don’t use a lot, no matter the mod.

And given the fact that the mod can only reach 80W, putting a curve feature on the Mojo seems a little unnecessary. I would’ve been happy with a preheat or boost mode as an added kicker beyond just power and temperature control, instead of having to do a click-fest to access the power curve feature.

The Mojo comes in a kit, and the accompanying tank is the UFORCE sub-ohm atomizer. I’ve never used the UFORCE, but I’ve heard mentioned while doing reviews of the Drag 2 and the VMATE, the latter of which also comes in a kit with the UFORCE T1 tank. There are three atomizers under the UFORCE name, the original, the T1 and T2. 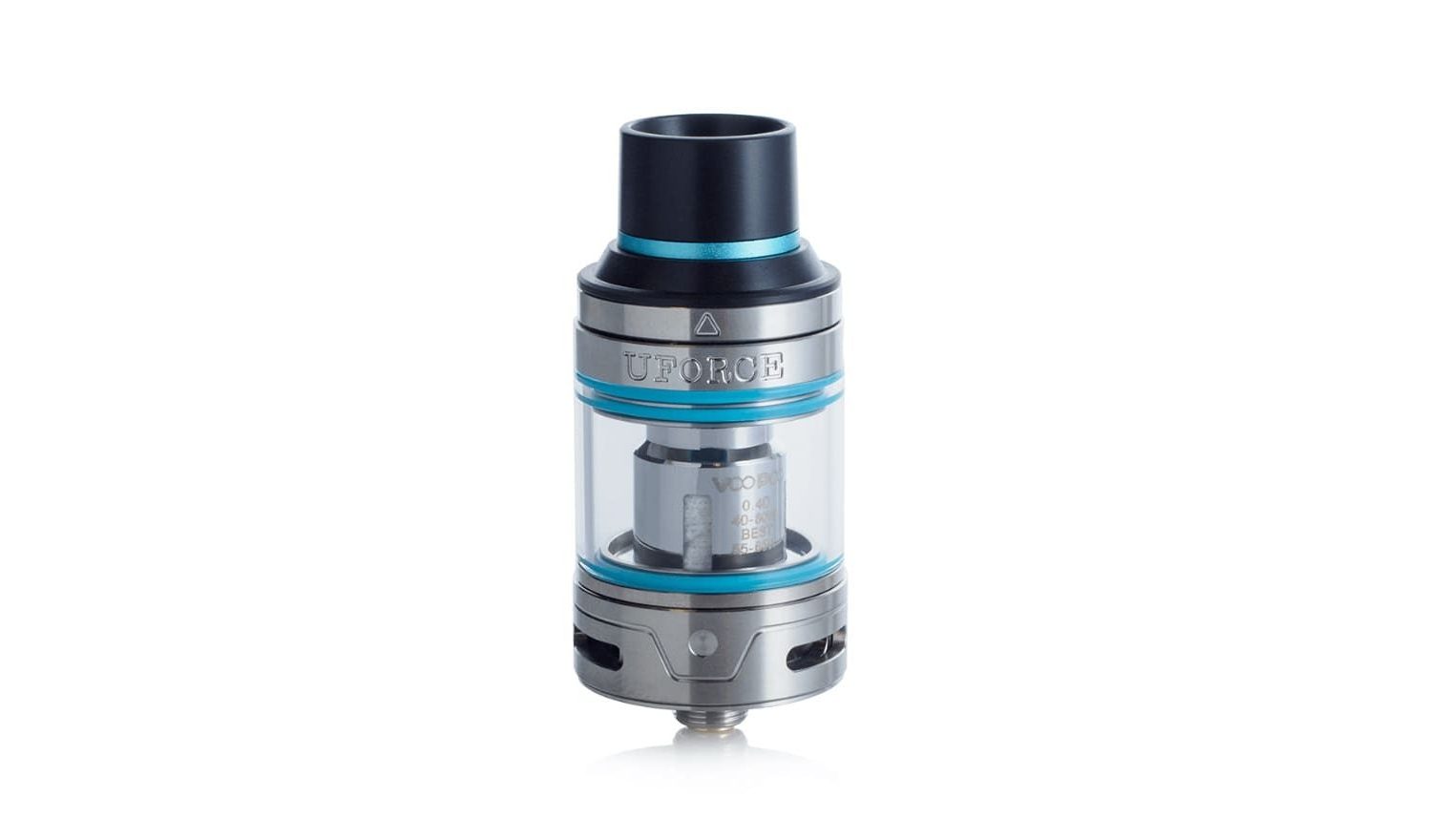 The UFORCE in the Mojo kit is stainless steel and Pyrex glass. It can hold 3.5ml of e-juice, and there is an extra glass piece included in the package. The tank has top-fill, with the push-back style top cap covering up the fill port. All you need to do it snap the lid back and fill the tank.

The UFORCE has three bottom, adjustable airflow slots that move around nicely, and stops well, as they are prevented from moving all the way around with a stopper. Inside the tank, there is a stout little internal chimney that increases flavor, while keeping the vapor nice and warm.

The VooPoo Mojo coils, the U2 UFORCE 0.4ohm atomizer heads that come included in the kit (there are two of them) are rated for between 40-80W, but they vape best between 55-65W, so they are perfect for the Mojo. There is another atomizer head available for the UFORCE the U4, which can vape up to 120W.

The Delrin drip tip is 14mm (0.55 inches) wide, which is massive, like a chimney on a steamer ship, so there’s a lot of clouds going to come out it. The 0.4ohm, parallel coil is also quite full so, again, the cloud production should be on par with any other sub-ohm tank.

With the gigantic, wide-bore drip tip, the wide-mouthed coils, and the three adjustable airflow slots, things were sure to get cloudy. And they did. I started at a reasonable 50W, with the 0.4. Ohm VooPoo Mojo coils, I got a smooth, albeit noisy hit from the UFORCE, with the airflow slots closed off slightly.

The flavor was good, but going a little above the recommended range of 55-65W, there was a slight decrease in flavor quality. It was not a huge change, but noticeable nevertheless. I opened up the airflow slots, which lead to a great hit, although the noisiness of the airflow was, again, a little distracting.

The drip tip is removable, but the mouth is so broad it would be hard to fit any other size drip tip in there. A Goon-style mouthpiece may fit but even with the included drip tip, which matches with the rest of the mod, there was no draw resistance, even though it was a bit loose.

Switching between the styles was a bit tricky. With the decentralized control panel (the power, and adjustment buttons all over the place), you have to switch the way you hold the mod to make any adjustments. The menu was not so hard to navigate; I’m just fed up with button clicks and using the firing button to do everything.

The battery life for 2600mAh cell was also pretty good. In temperature control, the cell lasted at least a day and a half. Even in wattage mode, if you vape at or lower than 30W or 20W it could conceivably last you the whole day.

The battery is not removable, so you need to charge it through the USB port on the base of the unit. The GENE.FAN chipset does enable pass-through charging so you can vape and charge at the same time, but with 2A charging, getting to a full charge does not take that long.

The Competition - the VooPoo Mojo vs. the GeekVape Aegis Mini vs. the VooPoo Drag Mini

The Aegis Mini is another 80W mod with an internal 2200mAh battery. It features a durable, exterior build of zinc alloy, leather, and silicone that makes the device dust, water, and shockproof. The Mini also has the intelligent AS chipset that enables variable wattage, temperature control, and bypass mode. 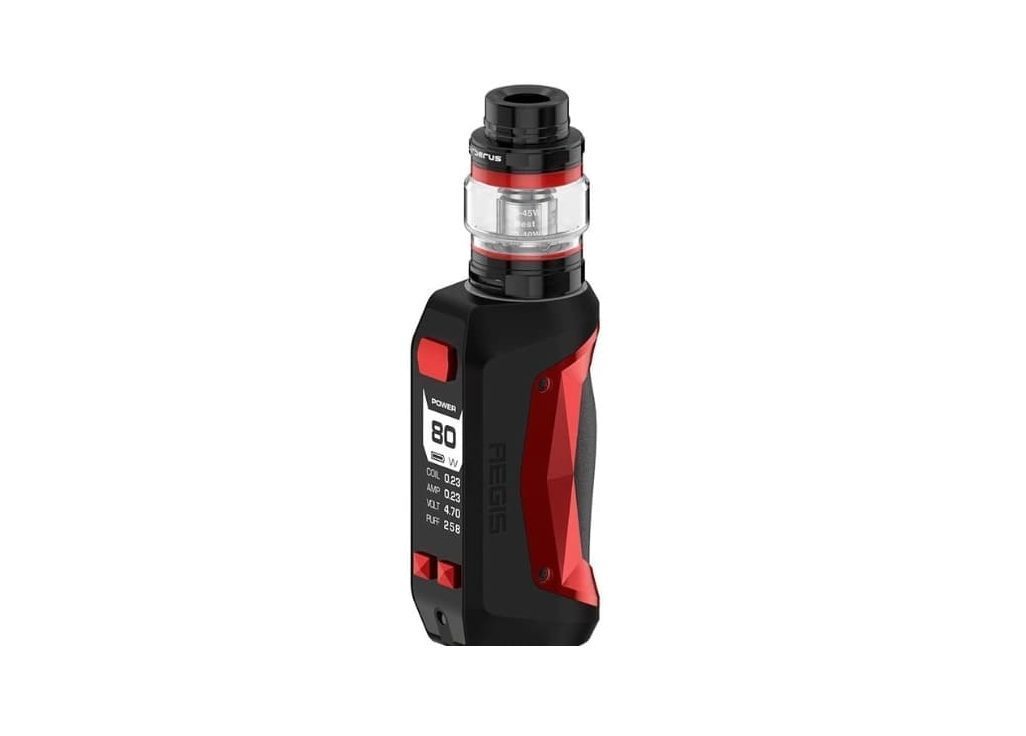 The chip also allows for quick 2A charging through devices USB charging port. The unit has a spring-loaded 510 connection up top. The Aegis mini comes with the Cerberus sub-ohm tank that takes mesh-style coils.

The VooPoo Drag Mini features a large 4400mAh battery and has the GENE.FIT chipset inside its zinc alloy chassis. The Drag Mini measures 81.5mm tall (or 3.2 inches) and has those removable resin side panels that come in a variety of colors. The chipset allows for vaping modes like Flavor, and Cloud Mode, while also powering the device up to a 117W maximum power output. 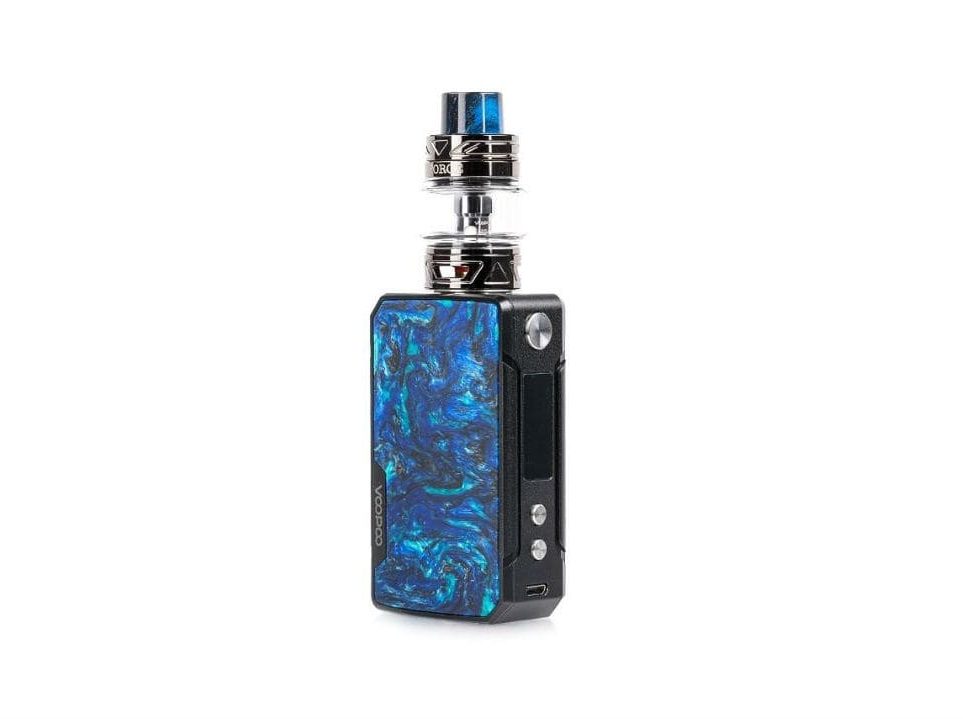 The Drag Mini employs a four-button control configuration, and a side OLED screen to select from the device’s many functions. The device has a USB charging port, and the kit includes the UFORCE T1 sub-ohm tank with two mesh-style coils.

Conclusion - The Last Word on the VooPoo Mojo

The VooPoo Mojo kit represents something new for VooPoo. It is unlike any of their other units, visually, at least, as it does carry the GENE.FAN chipset found on the Drag and VMATE. The functioning and screen are the same, but the button layout and design style are different. I, for one, liked the side adjustment buttons.

They blended entirely with the rest of the mod’s appearance, and it was something new to see on a mod, after so many same-looking control configurations. I liked the way the Mojo felt in my hand; it was very ergonomic and lightweight enough to be portable. There are some limitations to the device.

Its internal battery might present a problem for some. Its low wattage ceiling is not for triple-digit wattage vapers, but this is a good meld of a vape pen and a box mod, in both its design and performance. There is a factory reset button on the very bottom of the exterior that is supposed to rest the device if it freezes. But I don’t know of any scenario when that would happen, so I’m not sure why VooPoo felt that was an important addition.

All in all, I liked the visuals. I liked the performance and the overall design of the Mojo. It paired nicely with the UFORCE tank, and the matching colors of the tank and mod were a good combination. 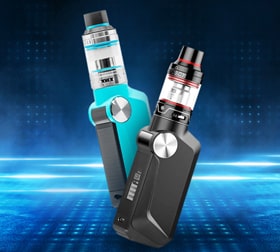