The Tesla WYE is a dual-18650 box mod that features a lightweight all-plastic exterior. The polycarbonate chassis comes in several colorful versions, each featuring Tesla’s signature paint-splatter design. The device has a front-facing OLED and a two-button control panel. The batteries are back-loaded and the battery bay door has a strong magnetic connection.

The WYE also features several battery ventilation slots along the screen, four on each side. There is a stainless steel, spring-loaded 510 connection up top, which can accommodate the tank included in this kit, the H8 tank.

A Closer Look at the Tesla WYE

The 200W tc box mod is the first triple-digit wattage device, while there are also low-wattage devices. The WYE is also available in 85W and 86W versions, which take only a single 18650 cell. The WYE has a Reuleaux-like shape with a polyangular that is ergonomic and comfortable to hold. The device has six color options, each of which consists of a solid, primary color pockmarked with splotches of a contrasting color. 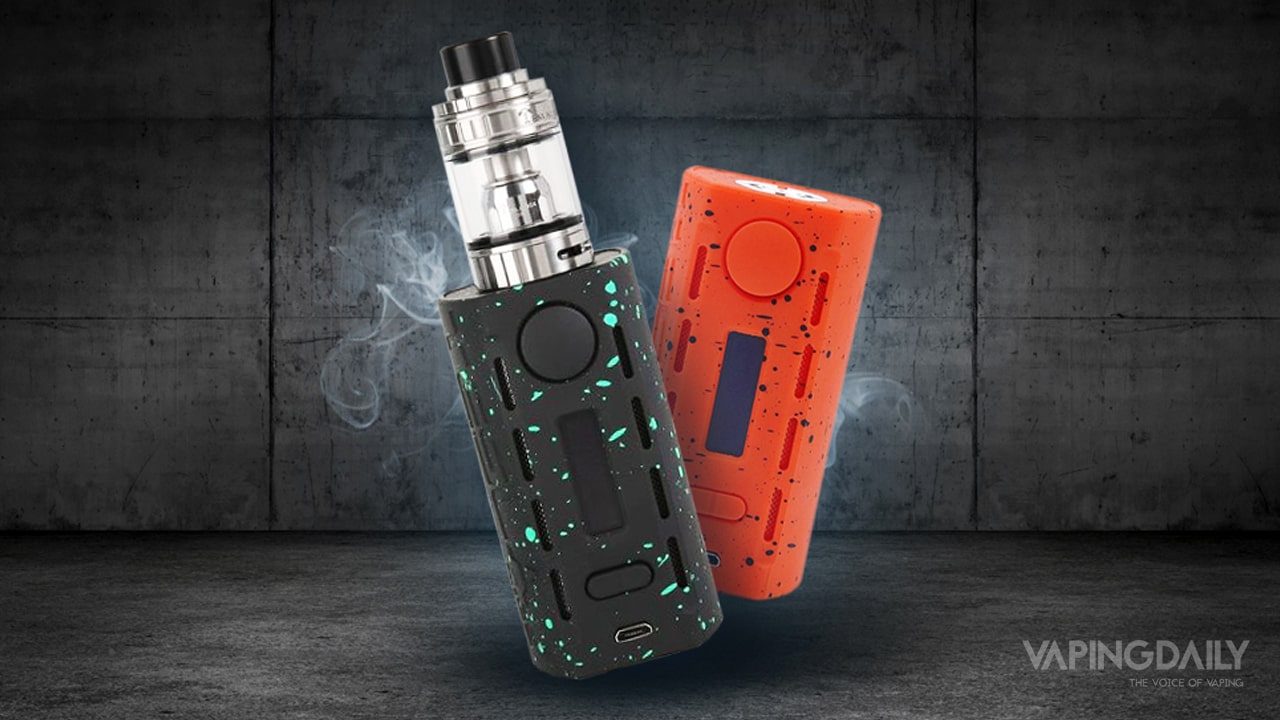 It’s not anything new, but it works for the device, giving it a simple yet elegant aesthetic. The 510-connection up top has a wide diameter and the top measures a wide 39mm (1.5”), which is ample enough to fit even 30mm attys. The rest of the device is organized intuitively so that it is easy to get a handle on the mod’s controls.

There is an over-sized, round firing button directly over the OLED, while there are two, rocker-style up/down buttons below it. There is also a USB port under the OLED so users can charge their cells or install firmware updates to the mod’s software (more on that later). The back battery door snaps into place easily.

There are two large openings on either side of the door so it is easy to remove. The best thing about the door is that it can be installed upside down as it has universal fittings. The two openings also provide more ventilation for the two cells. The material of the tc box mod is not only supposed to make it light but also protects users from any potential heat transfer from the unit itself. 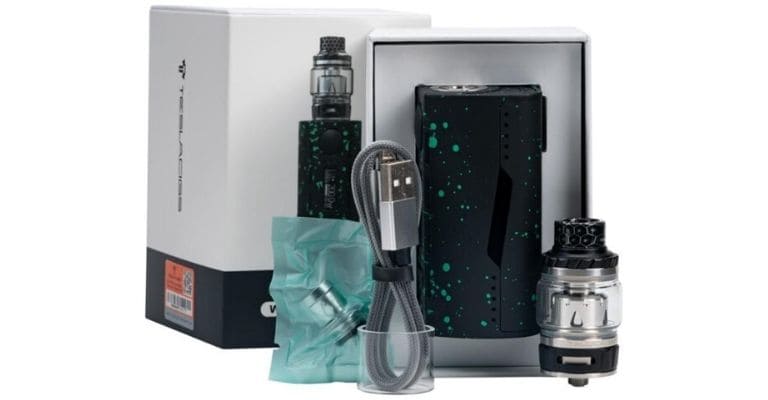 Here’s what users will find in their non-tank 200w tc kit:

The Tesla WYE 200W has a very simple layout. It has a standard box mod configuration with a huge, circular firing button that sits right atop the OLED. The control panel is very well laid-out and has an ergonomic design. The device has a wide-form-factor so even if it is lightweight it is not the most pocket-friendly box mod.

The back door of the 200w tc is also quite well-made. It does not have any throw when attached, despite its easy removability. There is a lot of ventilation for the batteries. The front-facing slots in the front are wide-enough to expose the aerated metal mesh underneath, which some vapers may like (it adds another design element to the solid color mod) or not like it. 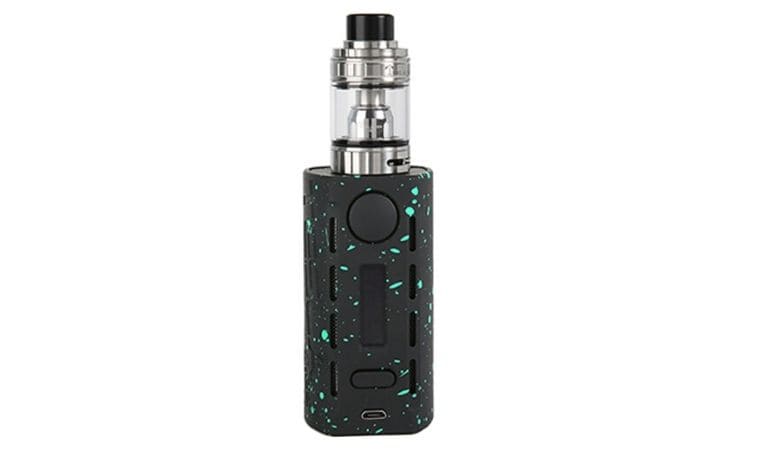 The WYE stands out for its audacious exterior design but not for much else. Loaded onto the chip is variable wattage up to 200W, temperature control for nickel, titanium, and stainless steel, as well as a TCR function. Users can also choose their preferred preheat mode or Boost mode, from among four choices, normal, soft, hard, and user, the latter of which functions like the mod’s curve mode.

The chip also enables three memory modes, which are displayed on the bottom, right-hand corner. Although there are three modes, users will not know it from the display as the icon only reads “M” without a number. Also, despite the two-cell configuration, the OLED only shows a single battery life icon, which is unusual, but given the small size of the OLED, maybe Tesla could only fit one icon.

How To Use the Tesla WYE

The WYE has a straightforward, user-friendly interface. The device’s OLED is a little small to fit all that information, but users should not have a problem navigating it. The WYE functions with a simple, five-clicks-on, five-clicks-off. It also powers on when users install two cells into the back.

When a new atomizer is attached, the screen will prompt users with the question of whether the tank is new or not. If users select new, it will automatically readjust its previous settings for the new atomizer. The main menu displays vaping variables like resistance, voltage, wattage, one battery bar, mode, metal (for Temperature Control), and memory mode.

Users need only press the large firing button three times to change the device’s settings. With three-clicks, the last selected icon will start flashing. Users can then use the up/down buttons to move through the variables, using the fire button to make a selection. For a small screen, there are a lot of options to change, but they are all easily accessible.

Tesla Cigs does not currently have a software patch for the WYE available on its website. There are patches for other Tesla mods and other WYE versions, but the 200W version does not have one yet. Visit the Tesla Cigs website regularly to find out more or to find out if there has been a software update.

The WYE has a very straightforward interface that is easy to navigate. The wide shape and 510-connector give ample room for users to attach sub-ohm tanks to huge RDA attys. The simple user interface makes this 200w tc suitable for new users as well as experienced vapers. The box mod offers a lot of customization via its curve and boost, or “taste” modes, but nothing that even a new user would not know how to use.

The 200W high-power output seems like a stretch for a dual-18650 mod, but it is not impossible, with the right, sub-ohm coil build. The ramp-up time for the mod to fire was negligible. The settings were easy-to-change and the menu never presented any usability issues. The heat-resistant coating of the mod did seem to keep the heat off, even when vaping at high temperatures/wattages.

The WYE mod should be a hit with fans of the stout and bulky box mods out there, like Asmodous Minikin or Wismec Reuleaux. The tc box has a sturdy, durable build but has surprisingly little metal to it, other than the metal grating behind the airflow vents and the 510-connection. The usability is also not an issue, but maybe the chipset could have had a Bypass mode feature to please unregulated mod users.

The Tesla WYE 85W is a pared-down version of the WYE 200W, as it uses only a single 18650 cell as its power source. The WYE 85W has similar color and theme options, as it uses a single-colored exterior along with several ventilation holes along its battery door.

The Vapor Storm Puma is a tc box device that also has a high-power output of 200W. The Puma also features a sturdy, but lightweight exterior shell made of ABS plastic. The mod’s exterior is drowned in several vibrant colors and graffiti patterns.

The device also uses a 0.91” OLED like the WYE, with vaping outputs like variable wattage, and temperature control installed onto its board. Users can also vape in Bypass mode with the Puma, unlike with the WYE, which does not have unregulated battery power.

The Tesla WYE 200W is a hard-working mod that can add a splash of color to your collection. The WYE has excellent build quality for an all-plastic mod. Plastic box mods get a lot of flack for being cheap, flimsy, and poorly-made. While that may be the case for other mods, the WYE succeeds in making the case for all-plastic build materials.

Zinc, stainless steel, and aluminum are durable, no doubt, but they are also heavy, and too much can make even the toughest mod seem like a literal drag. The WYE is a good example of a mod that tried something different – the build material, in this case – and succeeded at doing it. The rest of the mod features easy-to-use navigation, fast ramp-up time, and precision temperature control.