The Smoant Battlestar 200W TC Mod is both powerful and versatile, offering 200 Watts of output power as well as a temperature control mode.

In addition to the power and versatility offered by this mod, this mod was built using premium materials and parts. Its rugged zinc alloy construction gives it an edge in terms of durability, and its vivid OLED display is among the best displays on the market.

Additionally, the vape mod has a versatile menu with extra features such as Temperature Control Mode.

In terms of build quality, very few mods surpass the Battlestar 200W TC. It is a powerful, dual-battery mod with a zinc alloy construction that’s extremely durable. Plus, it uses an OLED display, one of the best display types on the market.

The device comes in a few different variations and has a wide variety of compatible Smoant accessories. Some of these Battlestar Mod accessories are included with the mod, some are included in the mod kit, and others are sold separately.

The Battlestar Squonk RDA can be hard to find outside Squonk Kit, but there are other Battlestar tank options that can be purchased separately. One such tank option is the RDA, not to be confused with the Squonk RDA. Alternatively, there’s the Battlestar RTA.

There are a couple of Battlestar Kits to choose from. First, there’s the standard Battlestar 200W TC Mod Kit, which doesn’t include a tank.

Alternatively, the Battlestar Squonker Kit comes with the 200W TC Squonk Mod as well as the Squonk RDA. The mods that come with each kit are mostly the same, except the Squonk Mod is squonk-compatible. 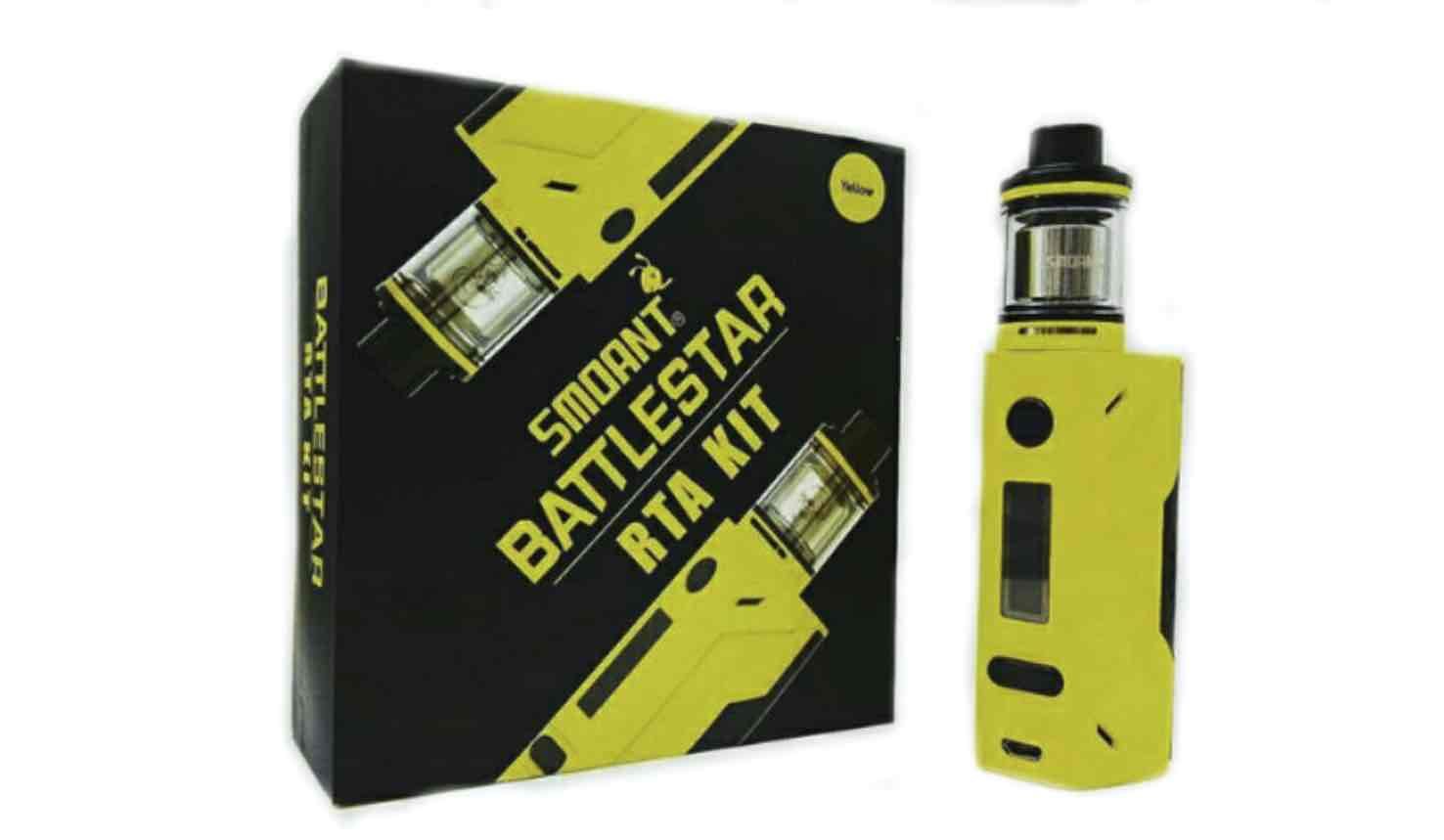 The Battlestar’s Build Quality and Design 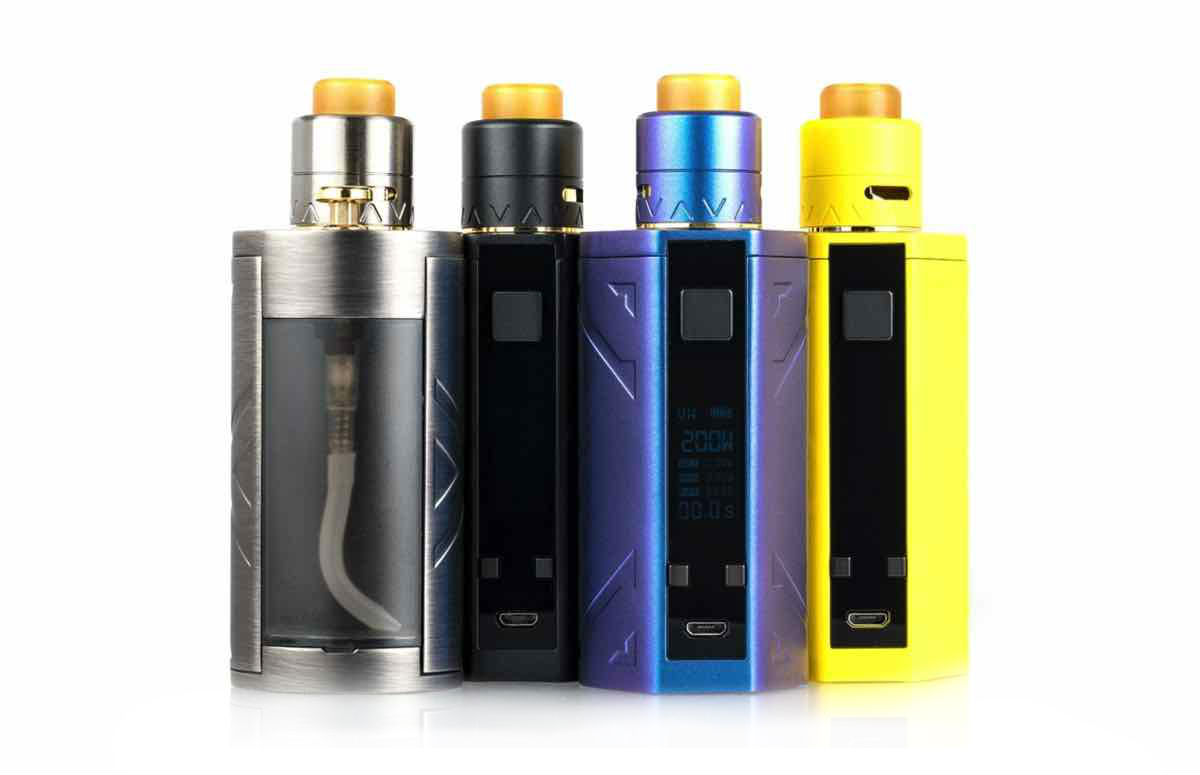 Smoant didn’t specify as to which chipset is being used in their Battlestar TC 200W Mod. However, due to the menu’s design and its list of features, a lot of people are speculating that it’s probably a modified version of their earlier Ant chipset.

Mods with temperature control can maintain a set temperature by automatically increasing or decreasing their wattage output accordingly.

Temperature control mode results in a vape session that’s never too warm or too cool, and it’s become a pretty standard feature in mods.

The menu offers a handful of features, and it’s extremely easy to navigate.
It features three options:

The Smoant Battlestar 200W TC Box Mod is one of the most compact dual-battery mods on the market, but sadly, batteries are not included. 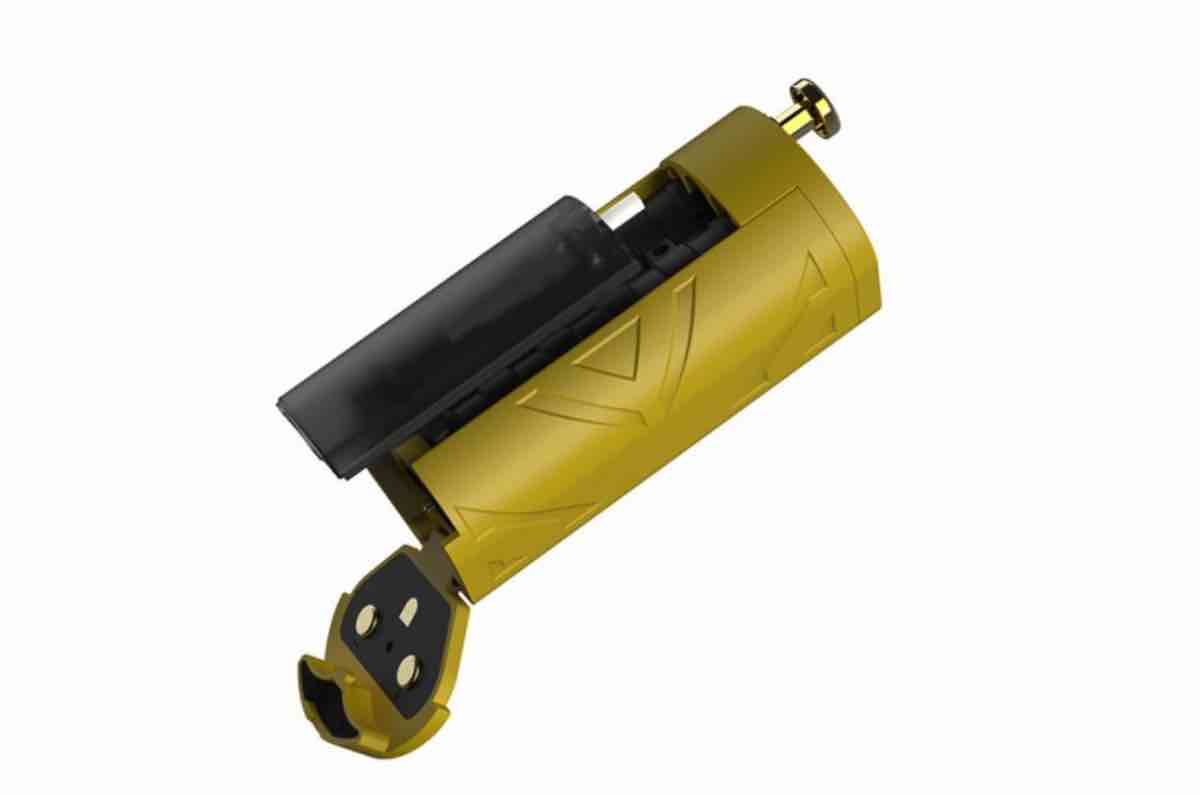 Thankfully, it’s very easy to find batteries for the Battlestar. It just needs two 18650 batteries, which are, by far, the most common vape batteries on the market.

The Battlestar 200W TC Mod has a wide variety of compatible Smoant accessories, most of which are sold separately. One such accessory is the RDA, not to be confused with the Squonk RDA. What’s the difference? 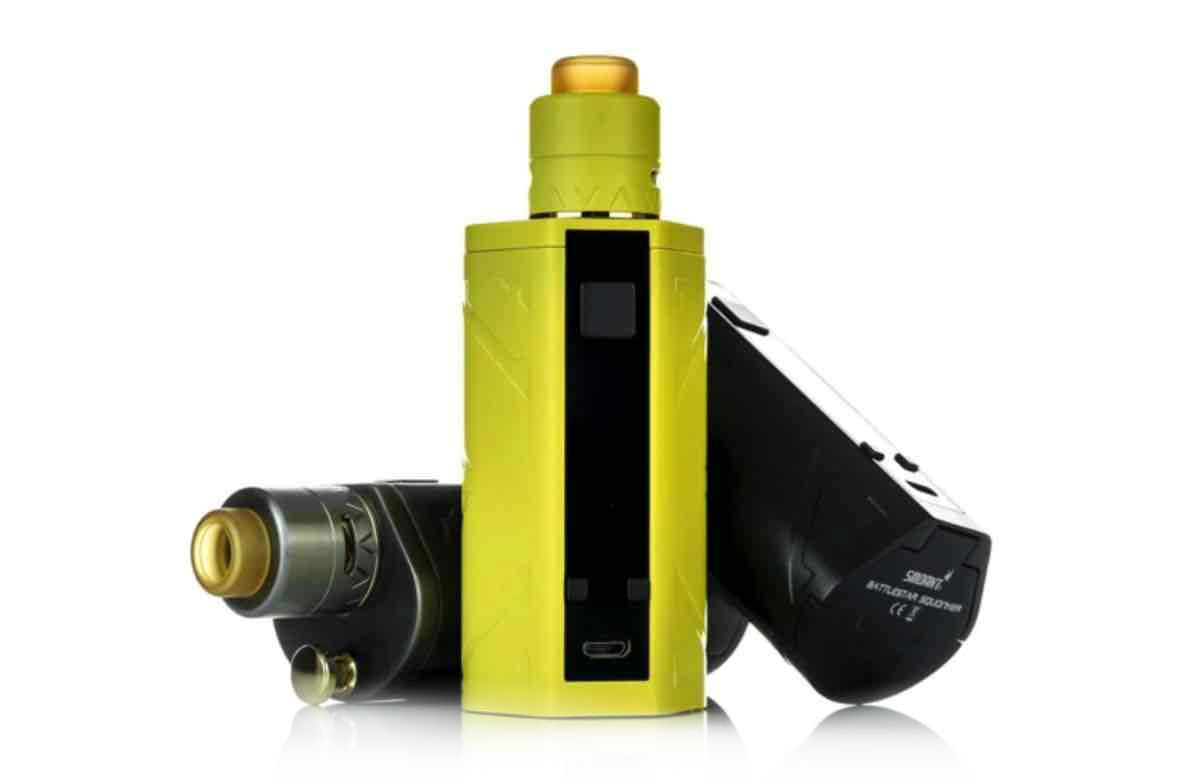 Well, squonk mods include a built-in juice bottle that sends juice into the tank with a simple squeeze. Squonk RDAs are made to be used with squonk mods like the Battlestar Squonk Box Mod, while regular RDAs won’t work for squonking.

That being said, the RDA won’t work for squonking, but it’s a great RDA for those that aren’t interested in squonking. It’s a stainless steel, dual-coil RDA with an easy-to-use post design and an adjustable bottom-to-top airflow system.

Having discussed the differences between the Squonk RDA and the regular Battlestar RDA, there’s still the Battlestar.

An RTA is like an RDA that doesn’t need to be dripped. It provides the best of both worlds. Like a regular tank, it doesn’t require constant dripping, and like an RDA, it allows the user to build their own coils.

The Battlestar RTA holds its own with adjustable airflow, a set of easy-to-use posts for dual-coil builds, a metal chamber, and a quartz glass tank for superb flavor.

Sadly, none of the Smoant Battlestar 200W TC Mod kits come with their own coils. Luckily, the Battlestar RDA, Squonk RDA, and RTA are all compatible with a wide variety of coil types.

With tanks like these, the user can build their own coils. For those that don’t want to take the time, there are also pre-built coils available. 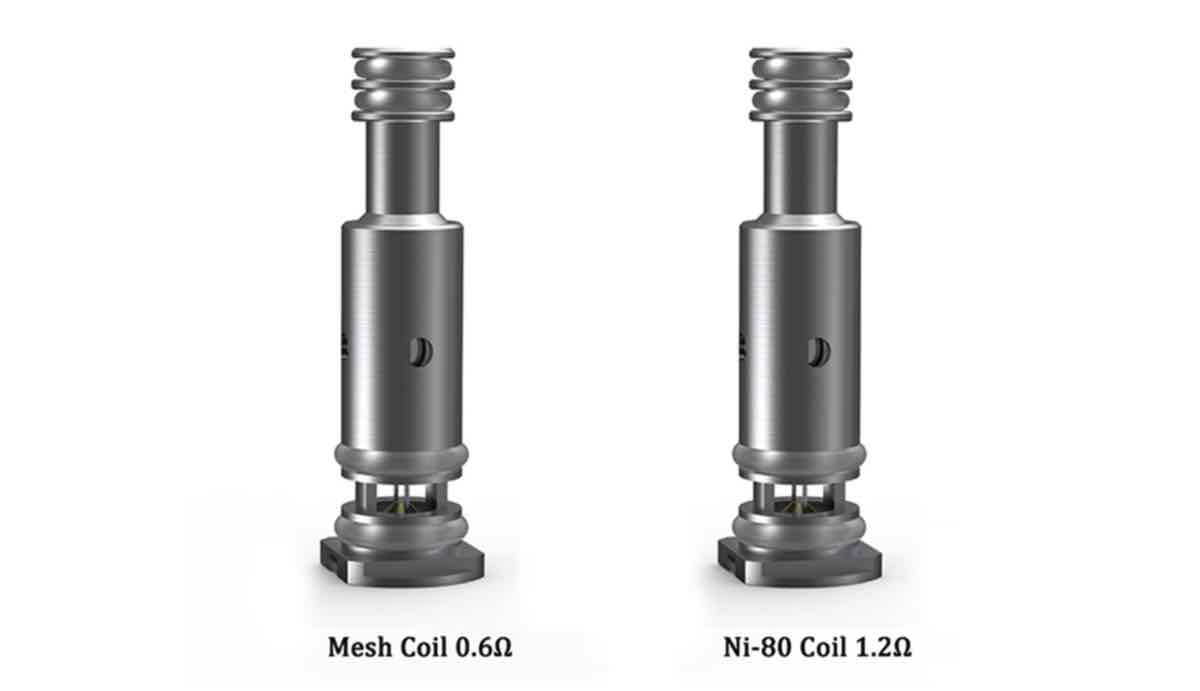 When it comes to these three tanks, most coil options will work, given the coil is made from either Nickel, Titanium, or Stainless Steel.

How to Clean Coils

Once vapor begins to taste burnt, it’s probably time to either change or clean the coils. Cleaning vape coils in an RDA or RTA is easy.

How Long Do Coils Last?

When it comes to RDAs and RTAs, coil longevity can vary widely. It depends on the type of coil being used, the number of coils being used, the frequency of use, and even the e-liquid. E-liquids that are high in nicotine tend to go through coils more quickly than low-nic e-liquids.

Generally, coils like these tend to last anywhere from three days to a couple of weeks. It mostly just depends on the kind of e-liquid being used and how often it’s being used.

Although the Battlestar’s micro-USB port is regularly referred to as an “update port,” there don’t seem to be any available firmware updates for the Battlestar.

This presumably means that the update port can be used to update the firmware in a hypothetical sense, but there’s currently no update available. This is likely due to the fact that the menu is already very easy to use and doesn’t really require an update.

The Battlestar Nano is the original little brother. It includes a lot of the same features and design choices. The main differences are portability and power.

The Nano 80w is significantly smaller than the Battlestar 200w, but it’s also significantly less powerful.
The Nano only needs one 18650 battery to provide 80W of output power, making it a lot more compact than the larger, dual-battery older brother.

The Mini is a lot like the Nano in both name and function. These are both well-built, compact mods. Both feature zinc alloy construction, and both are more compact variants based on the original Battlestar.

The Mini and Nano even have the same maximum wattage output of 80W. So, what’s the difference between these two variants?

The main difference is the Mini’s lack of temperature control. The Mini is used strictly for vaping in wattage mode, while the Nano offers a TC Mode. Besides that, these two mods are virtually identical.

The Battlestar 200W TC Mod and the Voopoo Drag 2 177W TC Mod are similar in a lot of ways. They’re both powerful mods that use two 18650 batteries, but it manages to offer a higher maximum wattage output of 200W as opposed to the Drag 2’s 177W. 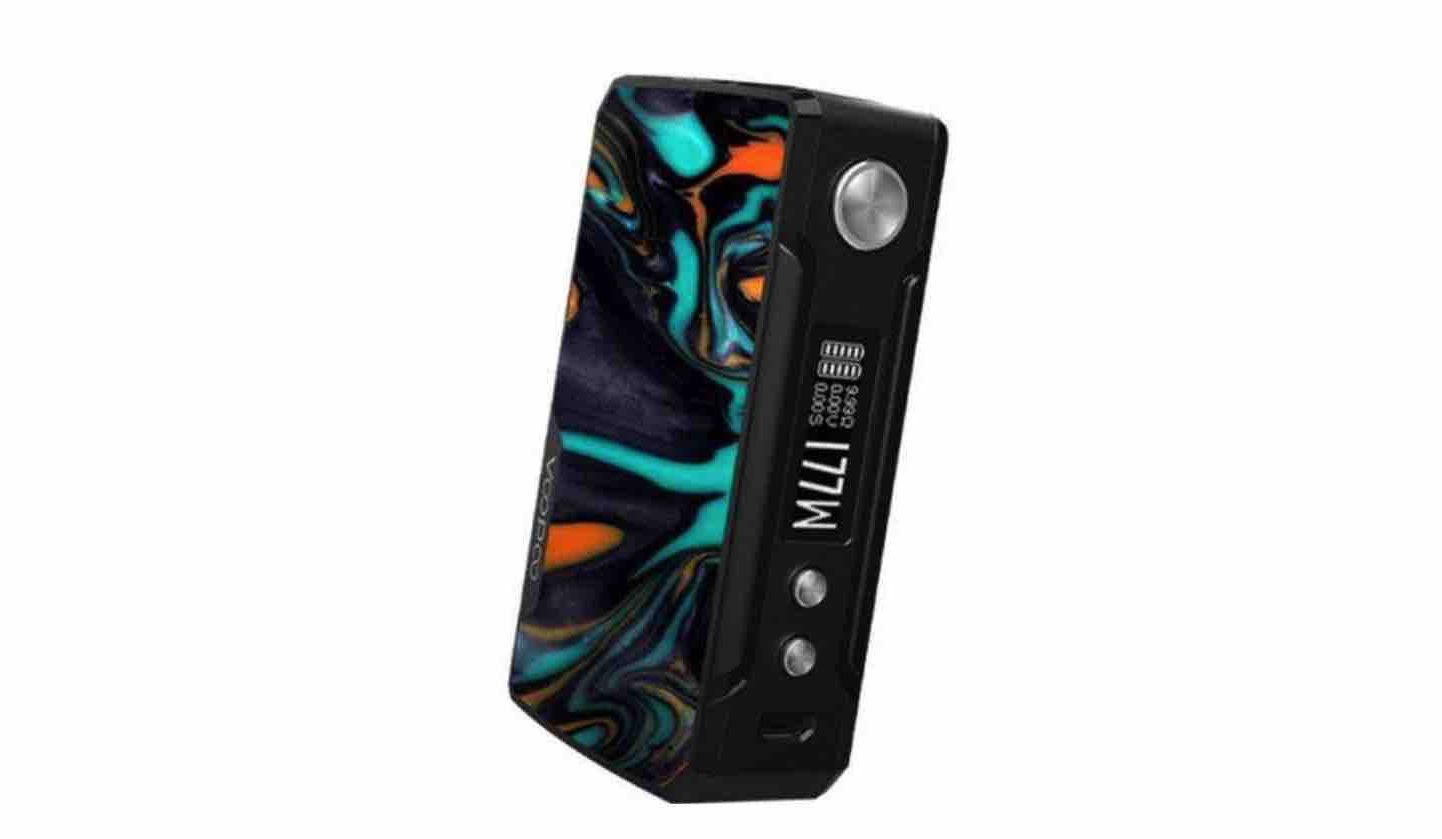 Besides the small difference in these two mod’s maximum wattage outputs, they’re both very similar in terms of features. Both offer wattage mode as well as temperature control mode, and both are reliable, durable mods. The Drag 2 just isn’t quite as powerful.

The SXMini G Class 200W TC mod is another mod that’s very similar to the Battlestar.

It features a maximum wattage of 200W, it features a wattage mode as well as a temperature control mode. It even features a similar build quality, utilizing a zinc alloy as well as stainless steel. 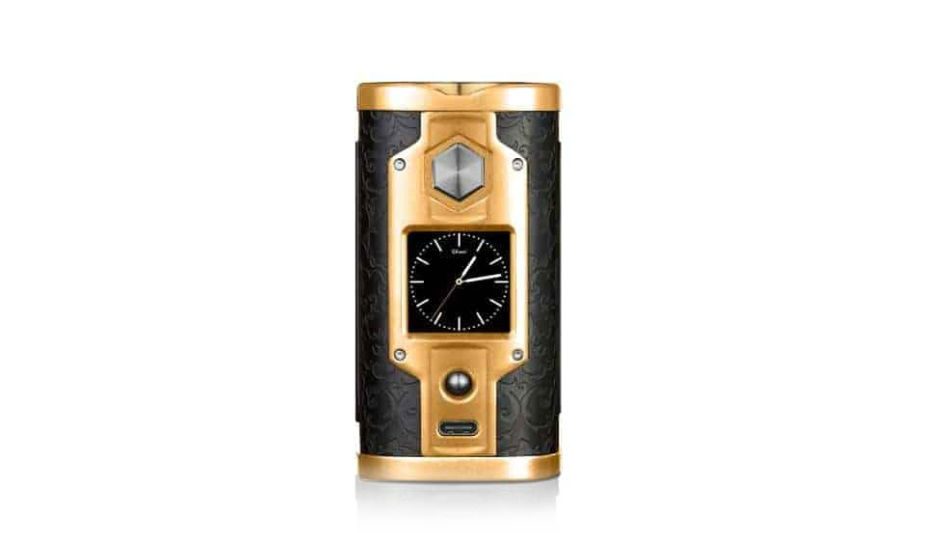 The only significant difference between these two mods lies in the fine print. The main mod features a wider range of temperatures to choose from, with options ranging from 200°F to 600°F (93°C-315°C).

The SXMini G Class 200W TC mod, on the other hand, features a temperature control mode that ranges from 212°F to 572°F (100°C-300°C.) This is a very small difference in terms of temperature, but the Battlestar still features a wider range of temperatures to choose from.

The Battlestar is for power-hungry vapers that want a compact and versatile mod. This mod is intended mostly for sub-ohm vapers and cloud-chasers.

It features a maximum wattage output of 200W and includes a temperature control mode for those who want an extra degree of control over their vape session.

This mod is built extremely well and should be extremely durable thanks to its zinc alloy construction. Additionally, its vivid OLED display is among the best displays on the market.

For a dual-battery mod, the Battlestar is pretty compact. Users will notice it in their pocket, but the level of portability that it provides is far greater than that of most dual-battery mods.

If this device meets all of the requirements that you look for in a mod, give it a try! You won’t regret it.

Smoant Battlestar 200W TC Box Mod users should let us know about their experience with this mod in the comments below. If you love it, tell us why! If you’re not so enthusiastic about your purchase, let us know about it.