Disclosure: The vape mods which we review on this website are tested by our trained, paid staff. As part of the review,  VapingDaily.com links directly to the product or brands so that you may purchase directly from the provider. We receive commissions from these providers, however, this does not affect the price you pay, and the commissions we earn help us pay for the costs of running this website. Thank you.

One of the most respectable Chinese companies in the vaping industry, Sigelei made its mark by producing cheap yet high-quality products. Its mech mods leave something to be desired, but their box mods are excellent bang-for-buck devices for vapers on a budget.

We were able to get our mitts on a couple of Sigelei’s newer box mods and after testing these for a while, all we have to say is that the Sigelei brand is worth the hype. 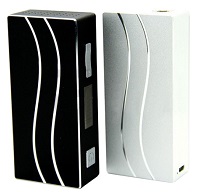 For vapers who do not vape above 50 watts, the Sigelei V2 50W Mod is worth a try. Priced at just $35, you would be surprised to know that the mod is powered by a YiHi SX330 chip. For those who are not familiar with YiHi, it is a Chinese chip maker whose performance rivals that of Western chip manufacturers such as Evolv. We were pleased to see the YiHi chip installed in the V2 50W Mod since all our experiences with the chip have been excellent.

The mod itself looks sleek and elegant, with a design that evokes class. Power comes from one 18650 battery which can be easily replaceable since the battery door is held by magnets. However, during our testing, the mod lasted more than a day of moderate vaping. We just charged the battery overnight and we never once had to replace the battery during the day. However, for heavy users and those who do not charge every night, the magnetic doors are a huge deal.

As with most variable devices these days, the Sigelei V2 has a plethora of safety features like low voltage protection, reverse battery protection, and low resistance protection among others. We love the size of the OLED screen, which doesn’t require us to squint when looking at the device’s settings, and the floating contact pin ensures most atomizers and tanks work as soon as they are attached.

Performance-wise, we were not surprised. The YiHi chip performed as well as expected, and the build quality of the mod itself is sturdy. Be careful not to drop the mod, though, while it will surely survive the fall, the magnetic door will come off, and it would be a hassle if that got lost.

In all, the Sigelei V2 50W Mod is an impressive device for just $35. Other brands with the same features and performance routinely sell for double the price. While our test unit was returned, we definitely will not hesitate to purchase one for our personal use in the near future.

For hardcore vapers, the Sigelei 150W TC mod is on point. With temperature control a maximum wattage output of 150 watts, this device will surely bring a smile to most cloud chasers.

Powered by two 18650 batteries, moderate users should expect two to three days of continued use without charging. However, cloud chasers and sub-ohm users will most likely not last a day. Fortunately, the batteries are covered by a magnetic door, making battery swaps simple and straightforward. While testing our unit, we put in sub-ohm coils and were able to last till early evening with moderate vaping. Our coils were at 0.2 ohms vaping at 120 watts. Lower ohms and higher watts will eat up more power, but users who do not vape at this level will find the batteries to seemingly last forever.

When it comes to performance, the 150W TC Mod is a beast. We were able to produce thick plumes of vapor without any hiccups. The mod holds a bit large, but that is the price of getting more power. In our use, this was not an issue. Besides, no one noticed the size of our mod since most are too busy admiring the clouds of vapor we were putting out.

Most users will not use the full 150 watts, but having the option to do so is there. Cloud chasers will be satisfied with this mod, especially with the temperature control (TC), which works extremely well. We had no burnt hits at any time we were using the device. Proof that the TC works as it should.

We have recently reviewed one of the most powerful mods Sigelei has to offer. Check out our Sigelei 213W Vape Mod Review for our expert analysis of this high-power TC Mode.

Though we only tested two devices, what we’ve seen so far bodes well for Sigelei. If their other – and future – devices work just as well, and it is priced affordably, other manufacturers should look out. Given some time, Sigelei will come out as one of the top mod makers in the industry.

The performance of both devices was flawless, with nary a hiccup. Each press of the button produced clouds, and we experienced no misfires whatsoever. Controls were responsive, and settings seemed accurate. In all, it looks like Sigelei has come out swinging and is putting up home runs left and right.

If you are looking for quality performance for less, check out Sigelei. They may not have the allure of Western mods, but they get the job done – excellently.