It’s about time I got assigned another device from Joyetech, the Joyetech EKEE. The first Joyetech device I ever reviewed was their top-class Joyetech Cuboid Pro with its wonderful touchscreen, (also one of the first touchscreen devices I ever reviewed) and its overall great functionality.

So I’m excited to see a new Joyetech mod come across my desk. This mod does not have a touchscreen, which is okay, but what it does have is a 2000 mAh internal battery that gets the device revved up to its maximum output of 80W.

This level of output is a little less than I expected but I like vaping at lower-wattages anyway, so that didn’t bother me too much. What did bother me was the unfortunate title of the device, which I assume is supposed to sound like “i-key” but to my eyes looks more like icky, which you don’t want your mods to make you feel.

Note to vape manufacturers: only rappers and rock-n-roll musicians from the 1950s (i.e., Chuck Berry, Little Richard) can get away with lousy spelling or purposely misspelling words. There’s a lot of vape brands guilty of this, so I’m not singling you out Joyetech.

The Joyetech EKEE does come as a starter kit, so there is a tank included with the mod, a ProCore Motor tank with two coil options, the ProC1, and the ProC-1S that range from sub-ohm capable (0.25ohms) to higher-ohm vaping (0.4ohms).

Here’s what you’ll get in your Joyetech EKEE 80W Starter Kit:

The EKEE is supposed to be inspired by the smart keys that are now pretty standard with most new, late-model cars, key fobs they call them. I didn’t see that though. My warped mind pictured a grenade of some sorts, with the mod’s wide center and its stubby stature.

The EKEE does come in at a little less than 80mm in height, so it is short, but its width, at the broadest point measures at little over 48mm, which gives it a bit more mod to hold onto, or vape-handles, if you will. But that top-heaviness does come at a price since the narrow base, and wide top makes the device a little rickety when you stand it up. 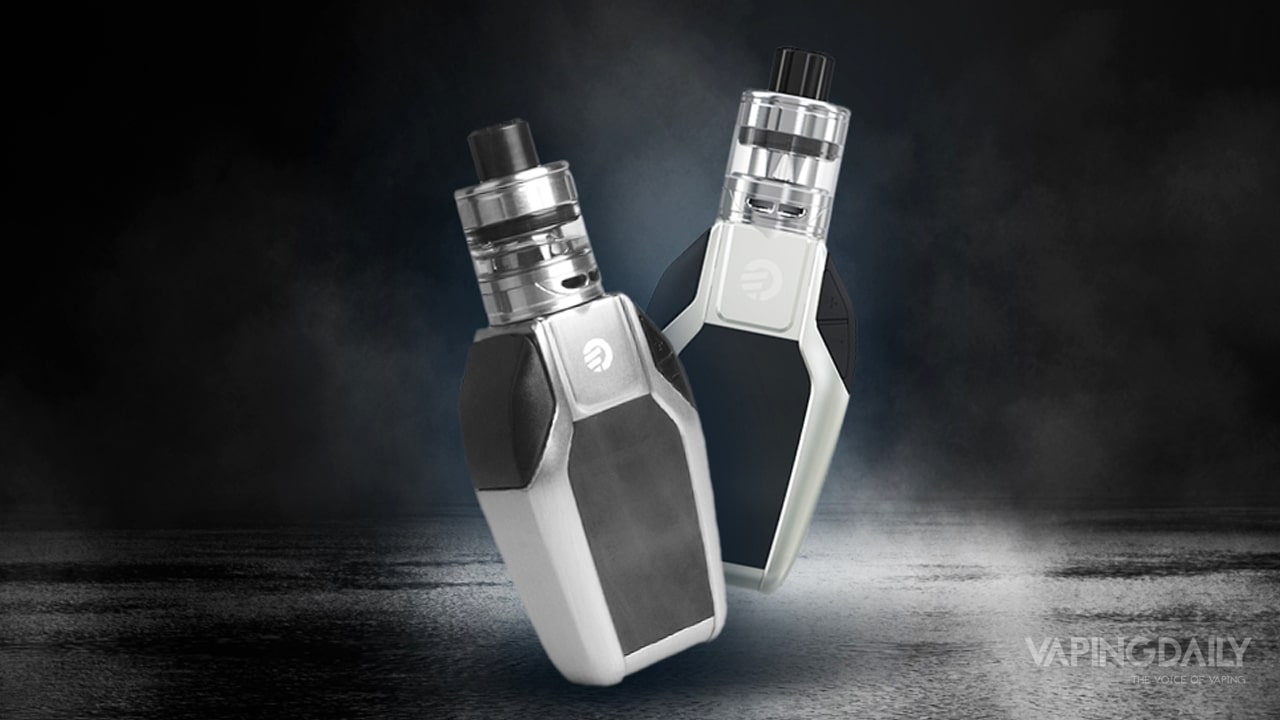 Even though the designers were going for that key fob-look, they failed to place the firing button on the front of the device (like on a real key fob) where they instead put the Joyetech logo. But, this being a box mod, I could see why copying that key fob setup exactly would’ve been problematic.

What the designers also got right with the EKEE is the huge, central OLED screen that measures in at close to 1.3 inches (or 33mm). It’s alive with color and vibrancy and reads out its information more creatively and innovatively than most other mods.

The just-reviewed Wismec Reuleaux RX Gen3 had a bigger screen size of 1.9 inches (or 48mm), but its displays were standard, and anachronistically digitized. The readouts on the EKEE are refreshingly simple and respond well to the commands you enter into the device (too bad it’s not a touchscreen).

And speaking of analog, the EKEE’s screen has an analog clock that you could use as a screensaver. The ProCore Motor tank is making its first appearance with the EKEE, and besides, the glass tube extension that you can fit onto it to enlarge its e-juice capacity, it doesn’t bring anything new.

You can push back the top cap to reveal the fill port, or you can flip open the entire top cap section to expose another fill port to make for a smoother filling process, just like you could with the ProCore Aries.

The ProCore Motor has bottom airflow vents that don’t exactly copy the Aries’s design since they are not wide slots, but are two holes cut into the base on either side. The two coils included in the kit, the ProC1 and ProC-1S, which, respectively, vape best in between ranges of 25-80W.

The Joyetech EKEE Starter Kit – Easiness Of Use

Turning the EKEE on only requires five quick clicks of the firing button. The main menu will display in large, unmistakable numbers the default wattage, or power mode, which is encircled by a half-circle gauge. Underneath that central readout, you’ll see the coil resistance, voltage, and amperage all lined up.

Getting into the menu section requires only three clicks of the firing button, and then you can choose to adjust any of the three modes you want, from the temperature control mode for nickel, stainless steel, and titanium, to bypass mode, to TCR mode.

The selector buttons also let you get to the analog clock screensaver. Pressing the firing button and the up button together lets you access the secondary menu where you can set your preheat temperature and duration and also your nicotine counter that reminds you that you’ve reached your pre-programmed limit of nicotine intake.

Joyetech: we care. For those of you that remember, the Joyetech Cuboid Pro even had a pedometer on it. I guess the nicotine cutoff is another novel way for Joyetech to whip you into shape.

I topped off my tank with a higher VG e-juice, Blue Honey from the Vape Dudes and I closed up the tank. I attached the ProCore Motor and started at the recommended wattage of 30W. The flavor was not so deep at this wattage, so I turned it up to 45W and started getting sweeter and sweeter draws.

The bottom airflow valves were tweaked open just a little, and I got a great mouthful of vapor. Pushing it to the maximum of 50W was what sealed the deal regarding great tasting vapor, warm, profound and delicate.

The EKEE Against the Others

I went looking for a comparable device to contrast with the Joyetech EKEE Starter Kit, and I decided on the last 80W device I recall reviewing the Wismec RX Mini. And right off the bat, the two devices are miles (or kilometers) apart just from their appearance.

The Joyetech EKEE is just, fun. It’s colorful, rounded, jolly. The Wismec RX Mini is all business, in dour gray and black with straight edges and a colorless OLED screen. Luckily for the Joyetech EKEE, I was in a fun mood today.

I needed a significant departure from the metallic wasteland of serious-looking machines, so I appreciated the EKEE more on a visual level. Performance-wise, things got a bit tricky. The two devices both have a max output of 80W. But the coils on the EKEE were better, I found, at delivering great tasting vapor than the RX Mini‘s stock coils.

I remembered that I got a dreaded, dry-hit when I was using one of the stock coils on the RX Mini. So for its fun demeanor and great-tasting vapor, I give this one to the Joyetech EKEE.

A lot of other reviewers have mentioned this as well, and it’s clear to see just by looking at the narrow base and the wide center that gravity would eventually win out and tip the mod over when it was standing, which did happen.

The Joyetech EKEE 80W starter kit was the second device I reviewed from Joyetech, and I was pleasantly surprised. I wasn’t expecting the pomp and circumstance that accompanied the arrival of the Joyetech Cuboid Pro, but still, the device was a breath of fresh vapor.

The looks and the design were light-hearted and took out some of the self-seriousness that accompanies some other devices. The coils worked phenomenally well; I got huge bursts of warm, tingly vapor and the battery life, although only 2000mAh lasted for at least one and a half days of vaping at close to 50W.

The mod did fall over sometimes like it had too much to drink at the office Christmas party, but just like that co-worker that had drunken too much-spiked punch, I had no problem helping it up to vape again.