I have fond memories of the CUBOID Pro, one of the first touchscreen mods I ever reviewed. The CUBOID Pro not only featured an innovative touchscreen feature but it was also a high-wattage device that allowed for a myriad of vaping outputs.

The CUBOID Tap takes that concept a little further by also featuring a selector panel underneath the screen that works just like the up and down buttons would on a regular mod. But the presence of TAPTECH technology is not the only thing that sets the CUBOID Tap apart.

Just like with the CUBOID Pro, the Tap comes with the ProCore Aries tank and is powered with two removable 18650 batteries, which are bottom loaded. The CUBOID Tap is also a powerful device, reaching a maximum power output of 228W.

When you purchase your Joyetech CUBOID Tap, you will find the following items inside your kit:

Inside and Out: The Joyetech CUBOID Tap

One thing I noticed right away about the Joyetech CUBOID Tap was its color options. I looked at the other options they had since I was unimpressed by the all-black and most boring version that I was given.

There are a total of five different color options (yellow, silver, black, red, and blue) and rather than coming in solid colors, each version has its own eclectic and stylish sticker pattern. I especially liked the silver version, which was contrasted nicely with a faux wood-panel sticker that stood out.

But, moving on to the rest of the device, the entire mod is made of a zinc alloy with a carbon fiber finish that feels smooth and satisfying to touch. The mod is quite tall at close to 130mm with the tank attached, and combined with the tap tech; it might not be the ideal choice to take with you on the go, even though there is a locking feature that prevents accidental firing.

Add in the weight of the two 18650 batteries and the CUBOID Tap becomes almost like a ball and chain. The centrally-placed OLED screen measures a sizable 1.3 inches and reads out a bevy of important vaping information.

Looking at the base of the Tap, you’ll find the battery door that gets pushed out and down to reveal the battery ports. Underneath the thin, flat touch panel you’ll also see the USB charging and upgrade port.

Above and below the screen is where you’ll find the stars of the show, the two flat panels that represent the second firing button and the two selector buttons, which are both tap-activated. You should keep in mind that “tap” is not the same as “touch”; the panels are not touch-panels where you lightly apply your finger to make a change.

With these panels you have to press down hard, as if it were a real button, to initiate any change or modification or to fire the device. The standard firing button on the side of the device does not have any noticeable rattle to it, and it must be used to turn the device on, as well as to enter the menu.

Further still, the two sides of the Tap are pressure sensitive and belie functions of their own, like being able to set your TCR value when the device is powered off. You would usually make such an adjustment through the mod’s main menu or by using the firing button.

Making the switch to the squeeze option didn’t make that much sense, although at least Joyetech tried to justify it. When the mod is on, you can also use the squeeze method, by clutching both sides of the mod, to enter the menu system or to lock the buttons by squeezing three times.

How the Joyetech CUBOID Tap Works

I already mentioned how the device needs to be turned on using the regular firing button located on the side of the device by clicking it five times. Once the Tap is turned on, the main menu will display all your vital displays like temperature, wattage, coil resistance and puff counter.

Now the way you get into the menu options can be a little tricky. You can click the side firing button three times to enter the menu choices, which range from power mode to TCR mode to temperature control for titanium, nickel and stainless steel.

There’s also an analog clock option that you can choose to adjust. Once you have made your selection, you need to press that firing button to confirm. One great thing that Joyetech added to the Tap is a small internal motor that sends out a low vibration every time one of the tap buttons is used, so you know that it is working.

The Joyetech CUBOID Tap: The Vape

The top-fill feature works just like a SMOK tank whose name currently escapes me, the Spirals or Cloud Beast King? But the top cap is pushed back and can then flip open as well to reveal two very sizable fill ports.

The tank can also come apart for easy cleaning and maintenance. The coils included in the CUBOID Tap kit are the ProC1 and ProC4 that have a combined vaping range between 40W and 110W. I stuck with the pre-installed ProC1 coil and vaped at the tail end of the ideal range of 55W-65W for this coil at 65W.

The vapor was a delight, almost frothy and left a lengthy trail. I was so pleased with my e-juice too, Marshmallow Man 2 by Donuts E-Liquid. I don’t know what it was about the CUBOID Pro that pushed me to choose a rich, sweet and creamy tasting e-liquid, but the choice was the right for this mod and these coils.

Tapping the panel to fire the device did not result in any delays, and the mod fired almost instantly. I found the selector buttons also quite responsive.

I don’t usually like making a comparison between two products from the same company, but the inclusion of that proprietary TAPTECH technology left me with few contenders, so I decided to revisit the CUBOID Pro to see how it would fare against its brand-mate, the Tap.

And right from the start, however, the CUBOID Pro does have some obvious advantages. Joyetech clearly wanted to deploy their tap tech onto a larger scale, without being overshadowed by a touchscreen. The Tap is that attempt, but I’m not sure that it succeeds in being the right platform.

The squeeze factor was excessive and it led to misfirings and modes being changed inadvertently, or the keys being locked and the stealth mode turning on and off. The Pro made smart use of the tap tech by restricting its use and letting the touchscreen do most of the heavy lifting.

On the Tap, however, the tap tech is overburdened and the confusing amount of different button combinations and controls only made things worse. It vaped exceptionally well, and its disappointing that such a great device is brought down by a messy interface.

The interface on the Pro, on the other hand, was as much a joy to use as it was to vape on it. I would give this one to the CUBOID Pro, based just on ease of use and functionality.

Regarding vapor production, the Tap did a fantastic job. The ProC1 delivered superb and savory vapor, while all the vaping outputs performed just as expected. The mod also fired extremely quick.

I think this is probably the first time that I’m giving a pro to a device for the different color options it can come in, but I think all of the possibilities were done exceptionally well and each of them was uniquely brilliant.

The Tap feels great in the hand. Its carbon fiber finish was both great-looking and was comfortable to grip.

Unlike the squeeze function, the tap buttons were not overly sensitive but did not require more effort than what was needed to fire the device or to use the up and down panels.

Getting a good grip on the Tap meant enabling the squeeze function that often leads to unintended consequences.

Even the CUBOID Tap user manual recommends against putting the Tap into your pocket or bag or purse due not only to the possibility of the squeeze function firing but also because of the size of the mod.

Joyetech is all about innovation, but a lot of vape companies are, it’s just that Joyetech has a proven record of making discoveries and taking risks. The CUBOID Pro was a record of that, and the CUBOID Tap is also an attempt to break new ground.

The Tap is a valiant attempt, but Joyetech overshot the landing. Sticking with just the tap buttons and leaving out the squeeze function would’ve been a better idea. The Tap performed amazingly well, and it was a joy to use the tap buttons, but a more restraint should be shown with any of Joyetech’s future advances. 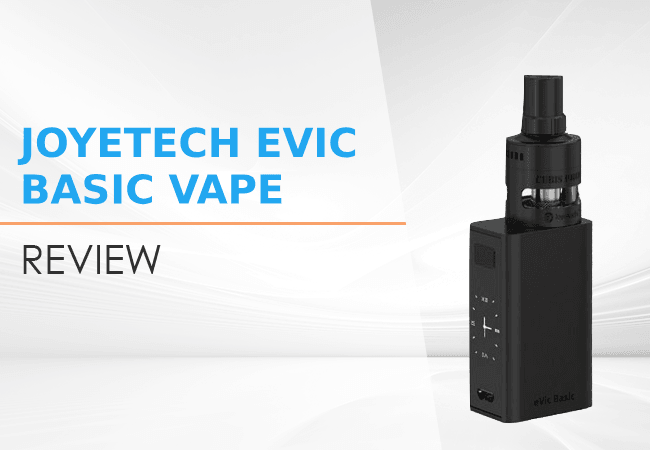 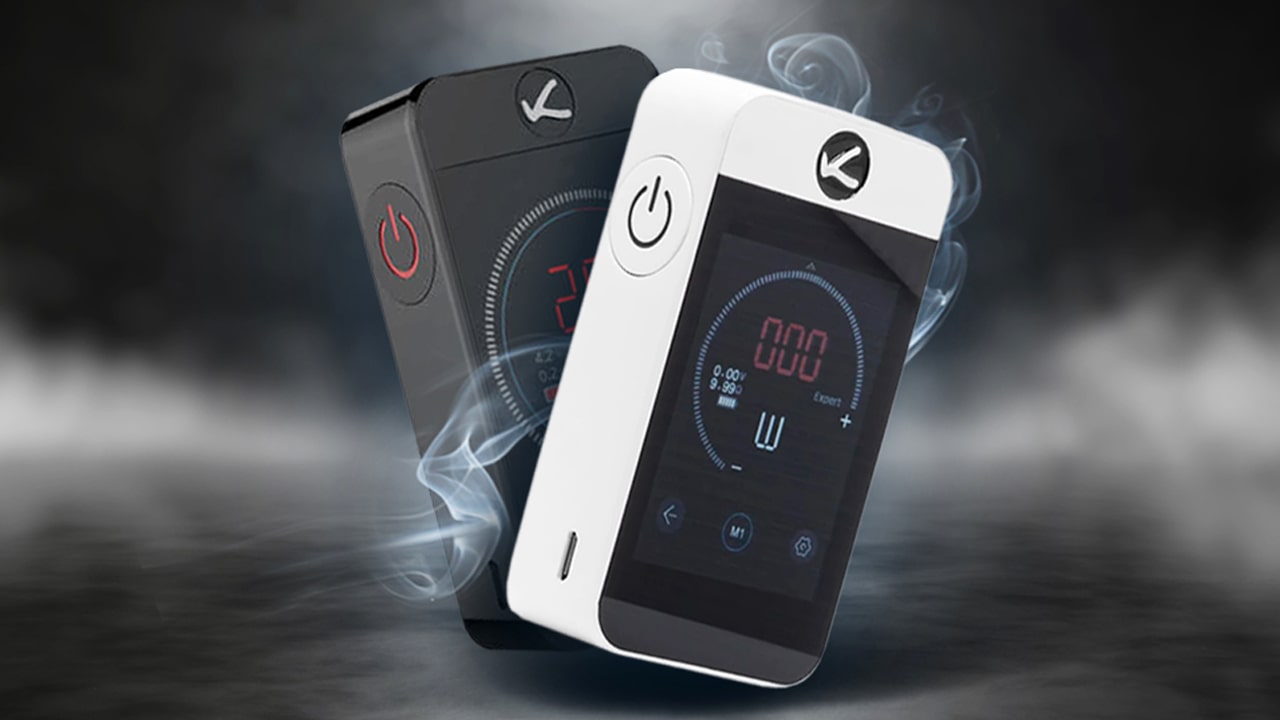 January 8, 2018
The Kanger Pollex from Kangertech is 200w of touchscreen vaping, and this review will unveil the curtains on its performance and quality.