It was bound to happen, and now it has. Although I don’t believe this is the first ever box mod to use an interactive touchscreen (I believe that distinction belongs to Sigelei T150) this is one of the first that perhaps, maybe, gets it right.

Whereas previous iterations of the touchscreen box mods were poorly lit, hard to see, and an overall pain in the neck, this model from JoyeTech lights up like a Christmas tree so all the readouts are crystal clear and you don’t need to squint to see what you’re doing.

Except, I suspect that just like the SMOK ProColor there will be a lot of tedious options that you can control with an LED display like this one. But, I blow whichever way the wind is blowing, and touchscreens with an innumerable amount of personalization options look like the way of the future, so, as the Beatles said, let it be.

The physical look of the design leaves nothing to be desired. It is a modern-looking, soft-edged box shape that runs on two replaceable 18650 batteries that can output at least 200W. The Cuboid has some fascinating features:

In your JoyeTech Cuboid Pro kit you will receive the following:

As a reviewer, it takes a lot to impress me. And I’m not easily impressed. Neither am I one to fawn over poorly designed mods and other systems just because they have fancy bells and whistles, but the Cuboid did all of the above.

It looks fantastic (it comes in five different colors). It feels great to hold. I wouldn’t say it’s lightweight, but given all the tech that it is hauling, that’s understandable.

The Cuboid Pro is remarkably streamlined. It has a simplicity and luxuriousness that is rare to see in most box mods, even the high-end ones. And the Cuboid Pro is undoubtedly a high-end device, though that is not reflected so much in the price point, but more on that later.

Looking at the Cuboid Pro without the ProCore Aries tank attached, I was reminded of a small power bank that you use on the go when you have no other way to charge your phone. And the Cuboid Pro can be used as a power bank.

On either side of the 2.4-inch screen, there are two buttons. One button is a standard hold-to-fire trigger, and the other is a tap button you can also use to fire the device. Unlike the ProColor, which still had the click-button on the side, and had backlights on their screen, the Cuboid Pro is much more advanced in its design and functionality.

Despite all the high-end technology on the mod, it still features a few classic parts, like it’s spring-loaded, stainless steel, 510 connector that can accommodate 25mm tank; the slip off battery cover with airflow vents, to access the battery ports. And that’s it.

The rest of the mod and its features are, more or less, controlled by the touchscreen and its various menus, which we will be getting into later. Getting into the ProCore tank, which has two versions – a 4ml tank and a TPD compliant 2ml tank – I loved, loved, loved, the flip open top, which seems like the best choice when deciding how to design a tank that needs to filled and refilled all the time.

All the parts of the ProCore are beautifully machined; stainless steel threading, three o-rings on the top, and adjustable air flow valves on the bottom. JoyeTech gives a myriad of options regarding coils with the ProCore. Two coils come included with the Cuboid Pro, a C1 that has one coil and the C4 that has, you guessed it, four coils.

So once you’ve installed two fully charged 18650 batteries, the mod is turned on by tapping the screen and then sliding the device open, like you would with any smartphone. The main menu or screen displays things like wattage, temperature and voltage with a few icons featured that control other things like the mode you are vaping in and selector buttons (plus/minus buttons).

I thought the choice of some of the icons to represent a function didn’t exactly pair up. The “lunar” icon, for example, is supposed to activate the stealth mode on the device, so the screen goes black when you vape. It wasn’t exactly intuitive; but then again, I would be hard-pressed to suggest an icon that would immediately be recognizable as stealth (maybe a ninja profile?)

One thing that I thought was great was the sliding possibilities to change your settings. Gone are the days of clicking buttons or holding them to get faster results; the sliding bar at the top of the display can be used to adjust most of the settings, from temperature to wattage.

Touching on the battery icon displays the power level of each battery with a big bold display. Between the two top icons, the lunar and cloud icons, the main icon lets you toggle between your current, your vape time and the resistance of your coils.

The cloud icon lets you switch between your different vape modes: TCR, temperature control, and variable wattage. Again, in whatever mode you are in, you can adjust the settings using the plus/minus icons or the sliding bar for quicker results.

There is also a third option available to use when adjusting individual modes. In whatever mode you are in – variable wattage, coil resistance, or temperature control – in the center of the screen, around the numerical readouts, are two half-moon lines that can also be adjusted by sliding your finger to either end.

The bottom icons on the screen control some of the more superfluous (in my opinion) options available on the mod. Among them are a puff counter, a pedometer, wallpaper adjustments, and a photo gallery should you wish to upload photos to the mod using downloadable firmware.

But, one thing I appreciated, is that your vape settings (temp., wattage, and resistance) were always visible. So, even when you are fooling around with the other features, those key settings were always seen.

Vaping It – My Impressions

I have to admit that I did get so caught up with learning all the ins and outs of the touchscreen that I did forget to vape with the blasted thing! The ProCore Aries has been around for about as long as JoyeTech has been around. I’ve never been let down by its performance, so I guess the quality of the vapor on the Pro would be consistent with how it has performed in the past.

The two options of coils is always a plus for me, so I was happy to see variety included in this kit. I started off with the single coil option and since the Cuboid is a classy, higher-end mod I filled my tank with some of that premium Black Note Prelude with an even 50/50 VG/PG content.

With a mod as powerful as this, I usually like to start well outside of my comfort zone, anything above 60W, so I set the wattage to 75W and started at a temperature of 425F. I opted for the tap button technology, and I tapped to start vaping.

The airflow valves were swung wide open, and the vapor flowed easily and effortlessly. It was a supreme vape, and I hadn’t even gone to the trouble to fine-tune all of the settings. But the vape was so fine and smooth with the settings I hastily inputted into the mod that I didn’t feel the need to improve on anything.

How the JoyeTech Cuboid Pro Compares

If you wanted to compare the Cuboid Pro to another the device the obvious choices would be either the SMOK G-Priv or the Smoant Charon. Those are two most popular touchscreen mods out there right now. But what are you comparing? It’s not the vapor quality or the performance of the device to produce the vapor; it’s how well the touchscreen works or doesn’t or the availability of features.

The G-Priv, like with all of SMOK’s kits, came with the Big Baby tank, which has been a favorite of mine for awhile, so I don’t think the ProCore has a chance of unseating it. The two devices have many of the same features on the touchscreen, although the addition of a pedometer and an uploadable photo gallery is mere gimmickry for me.

I liked the G-Priv more for its focus on vaping, and not for its inclusion of features, while fun and novel, were utterly unrelated to the task at hand, which is vaping. So, because it still retained some old-school charm and commitment to vaping, I would rather go with the SMOK G-Priv and the Big Baby.

What Appealed To Me

Despite my griping about the superficiality of the touchscreen and all its features (damn, I sound like an old man), reviewing it simply as a touchscreen, it was bright, easy-to-use, easy-to-read (even without my old man glasses) and surprisingly easy to navigate. A labyrinth of button combinations and menu options left me dazed and confused with the SMOK ProColor, but there was none of that with the Cuboid Pro.

The Cuboid Pro is endlessly watchable. I really couldn’t take my eyes off of it, and it’s not so eye-catching since the majority of the mod consists of the touchscreen. But like with most smartphone devices, I couldn’t help but checking it (and checking it out) every few seconds.

I’m going to single out the SMOK ProColor again (I know, it’s not fair, but it’s an easy target) to highlight the ease-of-use of the Cuboid Pro. Yes, there was a brief tutorial, but being a veteran smartphone, like the rest of the planet, the menus and switching between them were quite intuitive.

Just as a rule, I don’t have nice things. Or really expensive things. Why? I’m just a klutz and forgetful and absent-minded. So despite the fact that I would pay almost $100 for a touchscreen mod like the Cuboid Pro that wouldn’t change the fact that I would most likely, forget the thing on the subway or let it slip out of my hand and watch it break into a million little pieces like so much fine china.

So this is nothing directly against the Cuboid Pro (it does seem well built) I’m afraid that one fateful trip to the ground would be the end of our relationship.

This one seems just like a given. If you are going to have a high-performing device like this with a touchscreen and a 200W output capacity that’s going to impact how long you can use the JoyeTech Cuboid Pro Kit. I clocked only about eight hours, but that was of heavy use, so using it sparingly (setting it and forgetting it) might be the best option.

And The Award Goes To…

The Cuboid Pro is a very impressive device. It draws you into its warm, touchscreen glow and takes hold of you with all the customizability it promises. And yet, it was still easy to use and figure out.

Performance-wise, it also scored high. The coil options and the ProCore tank were ideal to match with a mod this powerful and customizable. The 510 connector was also a design coup since I could match a lot of different tanks comfortably and easily attain a perfect vaping experience.

I give the JoyeTech Cuboid Pro Kit a very impressed 9/10.

January 2, 2018
The Joyetech CUBOID Lite aspires to be the slimmed down version of the CUBOID Pro with its smaller size and 80W maximum. Read our review here. 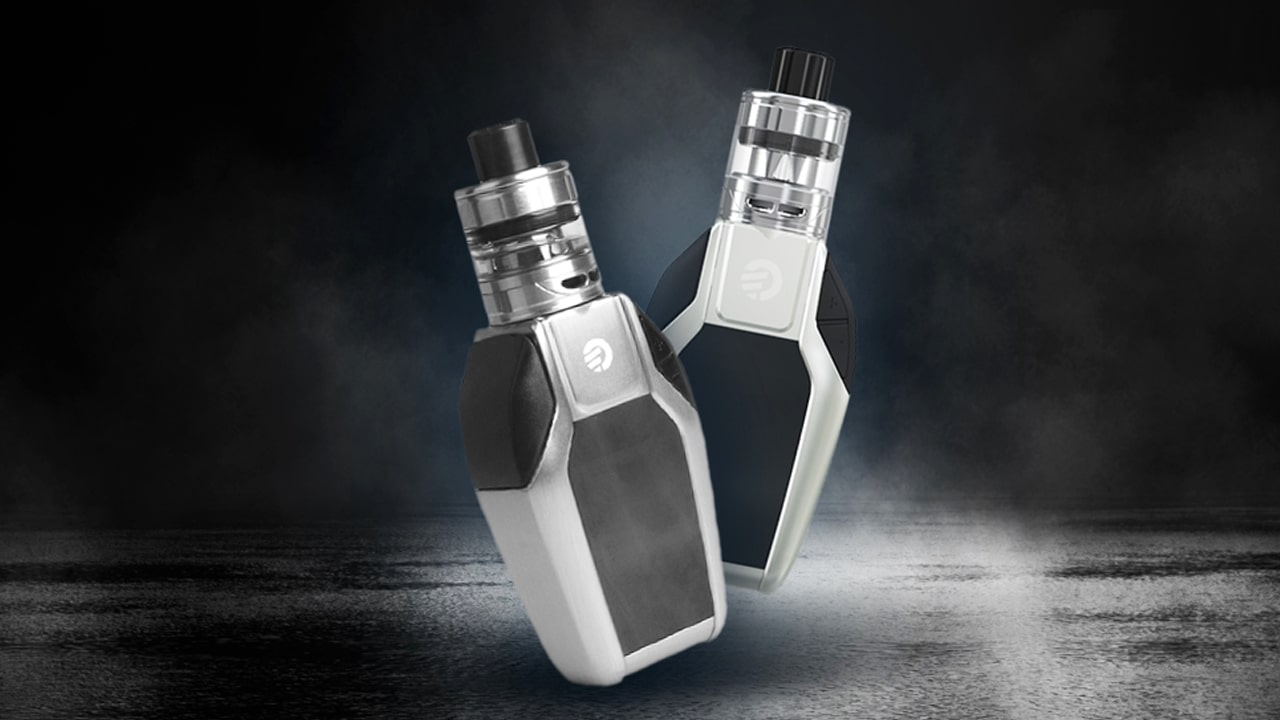 December 4, 2017
Joyetech took inspiration from your car key when designing the EKEE, a small, portable 80W device with a 2000mAh battery inside. Read our review here.