I suppose it is the job of any product reviewer to warn consumers about the false claims made by companies about their products. So, in keeping with my duty as a vape reviewer, I must state unequivocally that the Joyetech CUBOID Lite is not, I repeat, is NOT a touchscreen device. Let the record show.

It seems strange that Joyetech chooses to capitalize on the touchscreen trend that they successfully carried on with the CUBOID Pro, not by releasing another touchscreen device, but by releasing devices that appear to have a touchscreen, but do not. Which is why my fellow vape reviewers have gone to over-the-top lengths to warn vapers about Joyetech’s deception.

The CUBOID Lite, like its predecessor the just-reviewed CUBOID Tap looks like it has a big, bright touchscreen, but that’s all vape and mirrors. The Lite is a smaller device in both size and power that can only vape a maximum of 80W on its internal 3000mAh battery.

The Lite comes packaged with the new, incorrectly-named Exceed D22 tank and EX atomizers that offer both deep, lung hits and mouth-to-lung hits, with two different coil options. There is no tap tech present on this mod, although it’s probably better that it doesn’t since its size makes it great for portability and the tap buttons would’ve diminished that factor.

Here’s what you’ll find in your Joyetech CUBOID Lite kit:

Inside and Out: The Joyetech CUBOID Lite

Again, although you may be tempted to start tapping at the large 1.45 inch OLED screen on the CUBOID Lite (it’s so damn inviting!), it is NOT a touchscreen device. The Lite has a very standard side firing panel, as well as a rocker-style selector button on the front of the device and underneath the OLED screen.

The screen on the Lite reminded me a lot of the screen on the EKEE, also from Joyetech, since it looks almost endless and features hidden figures and emojis that pop up when you enable various, superfluous options on the mod’s board (i.e., nicotine counter).

The Lite measures almost 115mm in height with the Exceed D22 tank attached and it feels quite comfortable to hold, although the finish on the mod seems like it would be prone to easy scratching.

The side firing panel stops responding about halfway down, so you don’t have to worry about the device firing inadvertently if you touch any part of the panel. Since Joyetech wanted to maintain that touchscreen illusion, the USB charging port that also allows for the Lite to be upgraded using downloadable firmware is located, awkwardly so, on the top of the opposite side panel.

At the very bottom of the device, you’ll find a few venting holes, as well as a secret, factory reset button, should your device ever decide to self-terminate.

Getting to Know the Joyetech CUBOID Lite

The CUBOID Lite belongs to the same family of CUBOID products, so navigating them has become second nature at this point since I’ve used and reviewed almost all of the CUBOID family members.

The side firing panel worked very well, and it was responsive and gave excellent, reassuring clicks. The same can be said about the selector buttons with two different sides. You can do variable wattage, temperature control with three different materials (nickel, stainless steel, and titanium), TCR mode, as well as bypass mode, which seemed like a needless addition for a beginner’s device.

You click the firing panel three times to enter the menu mode and then when in menu mode, you press the right side of the selector button to move in between the various outputs. Being only an 80W device the Lite did not need to run so high on the wattage scale, but getting to any other wattage level took too long for my tastes.

And yet another thing that seemed to be misplaced was the power limit feature on the device. Attaching any new atomizer onto the mod will prompt the board to ask the user if they wish to enable the power limit function.

If you answer “yes,” the board detects the coil material and sets an appropriate power limit, which you cannot traverse, unless you unscrew and reattach the atomizer and answer “no” to the prompt. I could see how this device would be handy on high-powered devices, but putting it on a low-wattage device seems counterintuitive.

There are also a few protection features included on the Lite’s board. You can enable what Joyetech calls the ENU system that, if activated, will stop charging your battery should the temperature become too hot.

You can access the ENU feature, along with the timeout, preheat and nicotine counter features by clicking the firing panel and the up selector button at the same time, which will bring you into the secondary menu.

Taking a Vape with the Joyetech CUBOID Lite

I’ll be upfront – I did not like the Exceed D22. The tank was a complete let-down in both the looks and performance department. It looked overly dull and had no eye-catching accents, and even the Exceed and Joyetech logos looked uninspired and flat.

Regarding its performance, the Exceed did not exceed whatsoever. The disparate parts were difficult to unscrew and reassemble, and I found pieces coming off that I didn’t know could come off (like the airflow regulator), while parts that I wanted to come off presented a problem.

The one saving grace of the Exceed was the glass tube extended, which added an extra 1.5ml to the 2ml capacity, giving you a total of 3.5ml. But with the smaller than normal coils, you need to attach the pipe extender to the atomizer when you do decide to use the tank extension.

Speaking of the atomizers, the two options that come with the Lite are the pre-installed EX 1.2ohm coil and the EX 0.5ohm direct-to-lung coil. It was ambitious for Joyetech to attempt to make the Lite a mouth-to-lung device, and I think their efforts were not in vain.

Oh, and I did speak too soon about there only being one saving grace on the Exceed. The presence of two distinct airflow options, three pinholes for MTL and one wide, direct lung slot, was also a great addition to the Exceed’s build.

The EX 1.2ohm coil performed wonderfully, I must say. It wasn’t the best MTL hit I’ve ever taken off of a mod, but it was a fair imitation. The independent airflow vents helped in getting that smoking feeling since I left open only one of the three pinhole vents.

The EX 0.5ohm coil was equally exceptional in its performance. I switched back to a higher VG content e-juice to vape with the sub-ohm coil, and its vapor production was supple, and flavorful, although the clouds were still a little on the light side.

How the Joyetech CUBOID Lite Stacks Up

I knew there was another low-wattage device I had recently reviewed that I could make a comparison to the CUBOID Lite. After looking back through my files, I found what I was looking for, the VaporFi V-Grip 75W TC mod.

The V-Grip and Lite have very similar features. They have a full complement of vaping outputs, from the basic variable wattage mode to bypass and TCR modes. Both the V-Grip and Lite are smaller than usual devices.

The V-Grip took only one removable 18650 battery and had a maximum output of just 75W, which is pretty apparent. The V-Grip also had a parallel firing bar as its primary firing mechanism. The most prominent difference I can see between the two devices is obviously the screens.

The V-Grip’s screen was practically thumbnail-size when compared to the IMAX-like OLED screen on the CUBOID Lite. But to reward the CUBOID Lite just for its display seems a bit unfair to the workhorse-like sturdiness and dependability of the V-Grip.

So, I’ll swing back in the other direction and give it the V-Grip just based on its exceptional, consistent performance with any manner of sub-ohm or mouth-to-lung coil and tank.

While I was never a smoker, I don’t know anyone who doesn’t enjoy slowly exhaling a mouthful of vapor Tony Soprano-style with a mouth-to-lung capable device like the CUBOID Lite. The 1.2ohm coil lived up to its promise, as did the sub-ohm option.

You become transfixed by the unknown depths that the OLED screen on the Lite seems to contain within its small recesses. With that said, all your vaping information is laid-out beautifully on the screen, with crisp and bright readouts that don’t leave you scratching your head as to what they mean.

The internal 3000mAh battery, at a full charge, and with moderate-style vaping lasted for at least a day and a half. The 2A charging capability on the Lite was a bonus and guaranteed only minimal downtime from vaping.

Joyetech included a lot of protections onto the device they didn’t have to add. Although the protections might not interest a serious, veteran vaper, they’re great aids to help guide new vapers around the dangers of overheating and incompatible coil and wattage combos.

I knew just from the mismated name that the Exceed would not deliver in any way, and I was right. Even though I appreciated the two airflow options that coincided with the two coil options, the rest of the Exceed tank disappointed both in its challenging layout and design plainness.

I don’t think we’ve seen the end of the CUBOID line. Although there are now three devices that fly under the CUBOID banner, there is still much more exploring to do concerning how far or how low or how small Joyetech can make their CUBOID models.

The CUBOID Lite did not exactly live up to the greatness of the Pro, but it did not commit the same blunders as the extra-sensitive, over-loaded with features CUBOID Tap. The Lite is exactly what its name promises.

Its portability is excellent. It performs well as both a direct-lung and mouth-to-lung device and its extendable e-juice capacity paired with the 3000mAh battery ensured lengthy vaping sessions. And the OLED screen just screamed out to be touched, but it’s strange (and a little sad) that Joyetech has yet to show the courage to come out with another touchscreen device.

I give the Joyetech CUBOID Lite starter kit a 7/10. 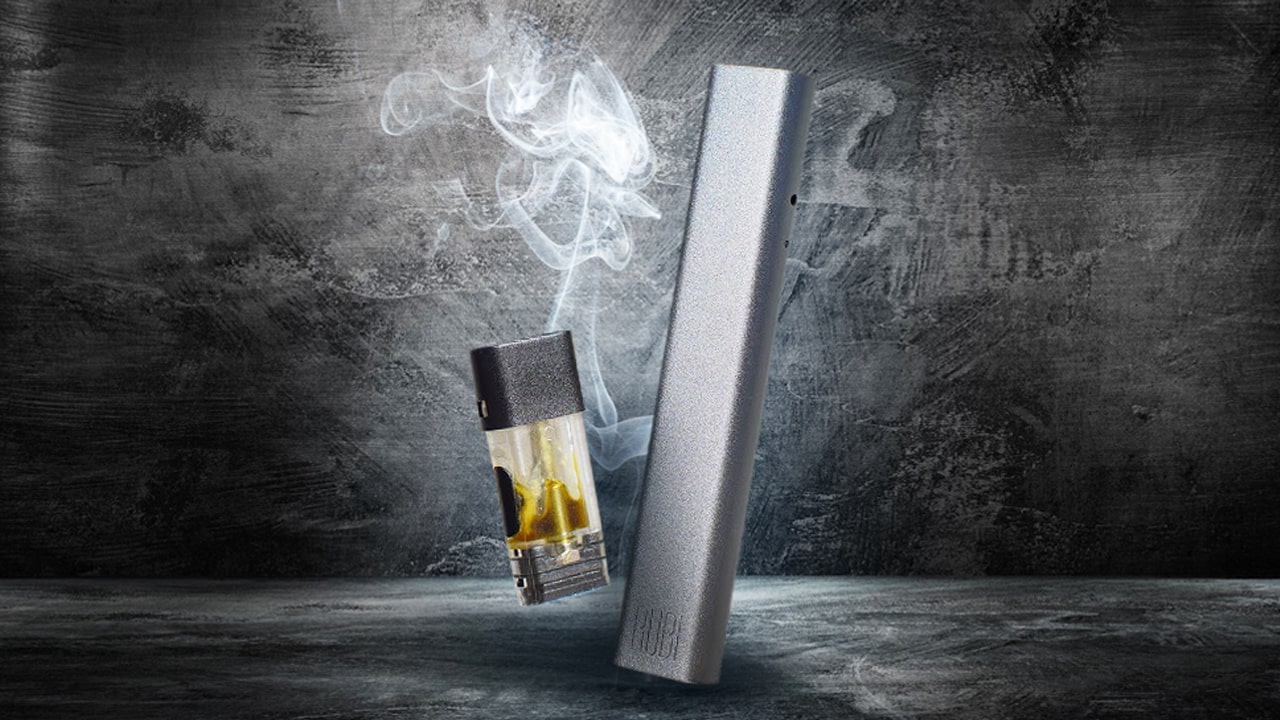 KandyPens Rubi Review: The Rubi That Vapes Like a Juul

December 20, 2017
The KandyPens Rubi vape pen works with both e-juices and liquid concentrates as the Rubi pod is a refillable vape cartridge with a 1ml capacity.

November 23, 2017
The JoyeTech Cuboid Pro Kit features an interactive, touch-screen that lets you adjust almost everything about your vape. Read our review here.