HCigar VT75 Nano Review: A Little DNA75 That Has Everything

The HCigar VT75 Nano is a single 18650 mod that is a smaller version of the original VT75, which took a 26650 cell but now includes a DNA75 chipset. The Nano version features a hardened, aluminum-zinc alloy build that mimics the form factor of the original.

The device has a slim 1.5” width, while it stands at 3.2”. The Nano has the same battery bay as the first VT75 with a threaded battery cap that uses a raised handle to screw open the bay.

A Closer Look at the Device

The HCigar VT75 has a smaller frame than the original VT75. The battery tube of the box mod is the only hollow part, while the rest of the device features a hardened aluminum-zinc alloy build. There is a small OLED on the side of the device, along with a low-profile firing/power button, and a single, rocker-style button that functions as the adjustment buttons.

The Nano measures a little over 80mm (or 3”) so its profile is significantly less than its predecessor. It is also thinner than the first, as it has a slim, more ergonomic design. There is a small depression on the backside of the mod so users can get a comfortable grip. The entire unit feels comfortable in hand, while the control panel is easy to access. 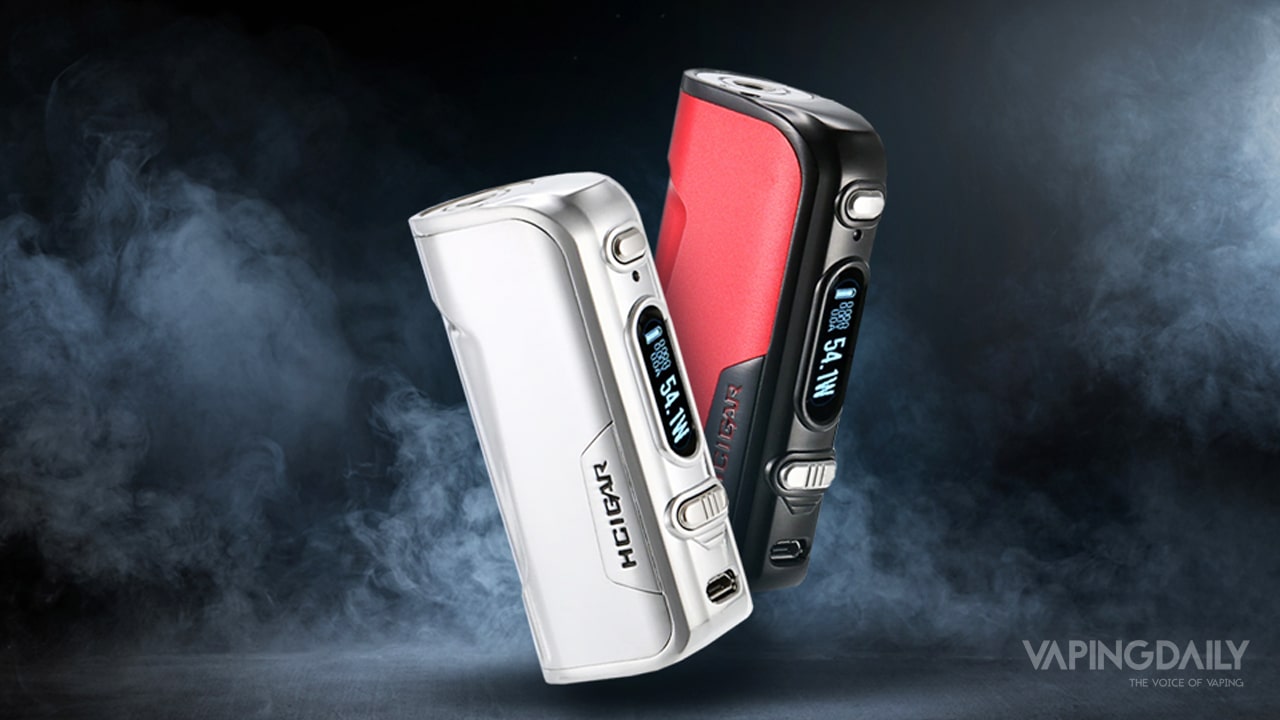 The device also features a USB port on the front located under the control panel. The port can be used to charge the device or to use the Escribe software that supports the DNA chip inside. On the base of the unit is a circular battery door that has a magnetic latchkey. Users need to lift-up the key and then use it to unscrew the door from its position.

Atop the device is a bright, shiny 510-connector plate. The 510-pin itself is silver-plated and is also spring-loaded. The 510-plate, along with the width of the mod, can accommodate attys of at least 25mm in diameter, even though the device measures 24mm> in width. There is a small, pinhole LED directly beneath the main firing switch that lights up when the device is fired.

The HCigar VT75 comes as a stand-alone device. Unlike the original, this version is compatible only with 18650 batteries and does not come with a separate sleeve. The device also features a USB cable to charge the device and so it can connect to the Escribe software. 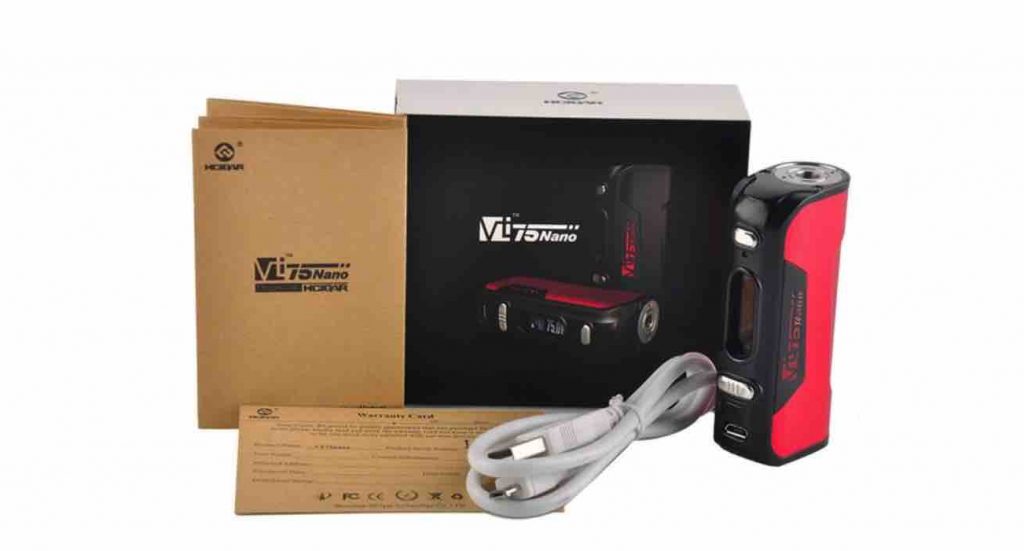 Here’s what to expect in the HCigar VT75 Nano kit:

The main difference between the first VT75 and the new version is that the latter is much smaller. The original stood at close to 90mm in height and close to 30mm in width compared to the VT75 Nano’s 80mm height and 24mm width. The original also took a single cell, but its housing was made for the larger 26650 cells.

The original kit featured a special 18650 sleeve adapter but the new mod only takes a single 18650 device. The entire mod is made to be more comfortable and user-friendly and it achieves that goal. The screen is the standard DNA Evolv and is easy-to-read while having only the most important readings visible.

The buttons are all very well-made and stand up to daily use. The response time is also very quick as the devices fires-up and fires whenever users press the fire button. The battery bay also has no battery rattle, as the cell fits snug into the bay, while the battery bay door keeps it in place.

The device uses the same screen configuration as all other DNA boards. The first menu system shows only the wattage, voltage, resistance, and amperage all listed on the right-hand side. The unit has a simplified menu, with the options already being preset. Users can simply scroll through the options, which range from temperature control for nickel, stainless steel, and titanium.

Each wire material also comes with several sub-options like using a preheat mode (or not). Locking and unlocking the device requires only five clicks of the firing button, which locks all user settings in place. Holding down the adjustment buttons, which is one, single piece and also has a selector mode when pressing the center of the button, lets users into the individual settings, allowing them to change their settings there.

How the VT75 Nano Handles

The VT75 Nano has great usability and is very straightforward to use, especially given its small stature. The build quality of the device also stands out. Holding it gives one the feeling of superior build quality, while not being too heavy or uncomfortable to carry. The device also has an easy-to-read, OLED that makes accessing the device’s features easier.

The stability and accuracy of the DNA Evolv chipset make the device a treat to use, especially for TC vapers. The limited, but reasonable 75W high-power limit should be enough for casual, mouth-to-lung vapers who want a smooth, low-wattage vape that does not send up huge amounts of cloud.

The 510-connection up top has a nice sheen to it and can hold attys as large as 25mm, which can support many types of atomizers, from sub-ohm tanks to RDAs. The menu system is fast, while the device itself is very responsive.

With the DNA Evolv 75 chip inside, the vape mod has a reliable set of vaping outputs for all kinds of vapers. The device includes the usual DNA Evolv line-up like wattage mode (up to 75W) as well as temperature control for nickel, titanium, and stainless steel. There is also the standard (for DNA chips, at least) preheat box modes for each metal in the TC suite.

The accuracy of the chip means that vapes can rely on the box mod hitting its mark, while the temperature control feature is one of the most precise in all of vaping. The preset nature of these functions makes using the device that much easier to use, especially for people new to the DNA experience.

The Therion from Lost Vape is the signature DNA device that combines elegance and style with the Evolv chip’s precision. The Therion has an ergonomic design with a stylish zinc alloy build that features wood-grain and leather accents. 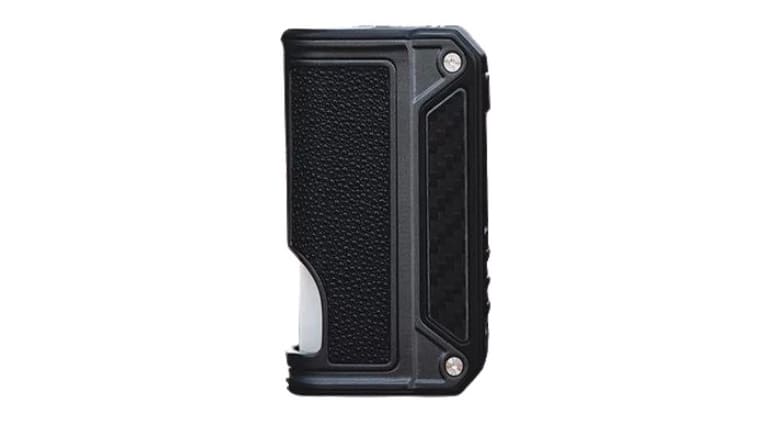 The device is a dual-18650 box mod that can reach a high power output of 75W. The unit also comes with the high-performance temperature control suite that Evolve is known for, as well as the same efficiency and power balancing of the DNA chip.

The original HCigar VT75 also featured the DNA 75 chip that gave it incredible accuracy and control over its many vaping outputs. The full-size VT75 is much bigger than the Nano version as it stands at close to 90mm in height and 32mm wide.

The full-size VT75 also features a single 22650 or 18650 (with adapter configuration) along with the same control panel (a 0.91” OLED with a three-button control panel). The original VT75 also has the same outputs as wattage mode and temperature control.

The HCigar VT75 Nano promises all the control and performance of the original while coming in at a more manageable size. The Nano is a shrunken-down version of the larger box mod, but it still features all the performance and precision of the first mod.

The slimmed-down, shorter version also has less of a profile and almost disappears into a closed fist making it discreet. The Nano can also support a wide range of tanks, from sub-ohms to RDAs with its sizable 510-plate, measuring at 24mm. The control panel and screen are very accessible. The simplified menu system also makes using this small, but powerful mod a joy to use.