The eVic VTC Mini 75w: Is it Worth Buying?

The JoyTech eVic VTC Mini is an upgrade to the eVicVT. It is better in appearance than its predecessor, and it has several impressive features. Buyers will find that it has a magnetic battery cover, upgradeable firmware, and more modes than other mods released by Joyetech.

Take the box mod up to 75 watts after downloading the new firmware, easily adjust the temperature and wattage, and choose between several attractive colors for the device’s body.

The advantage to this is that when the power runs low, the user only has to switch out the battery, and then keep vaping. This feature brings us to another point: the Mini uses a 18650, while the original uses a built-in battery. 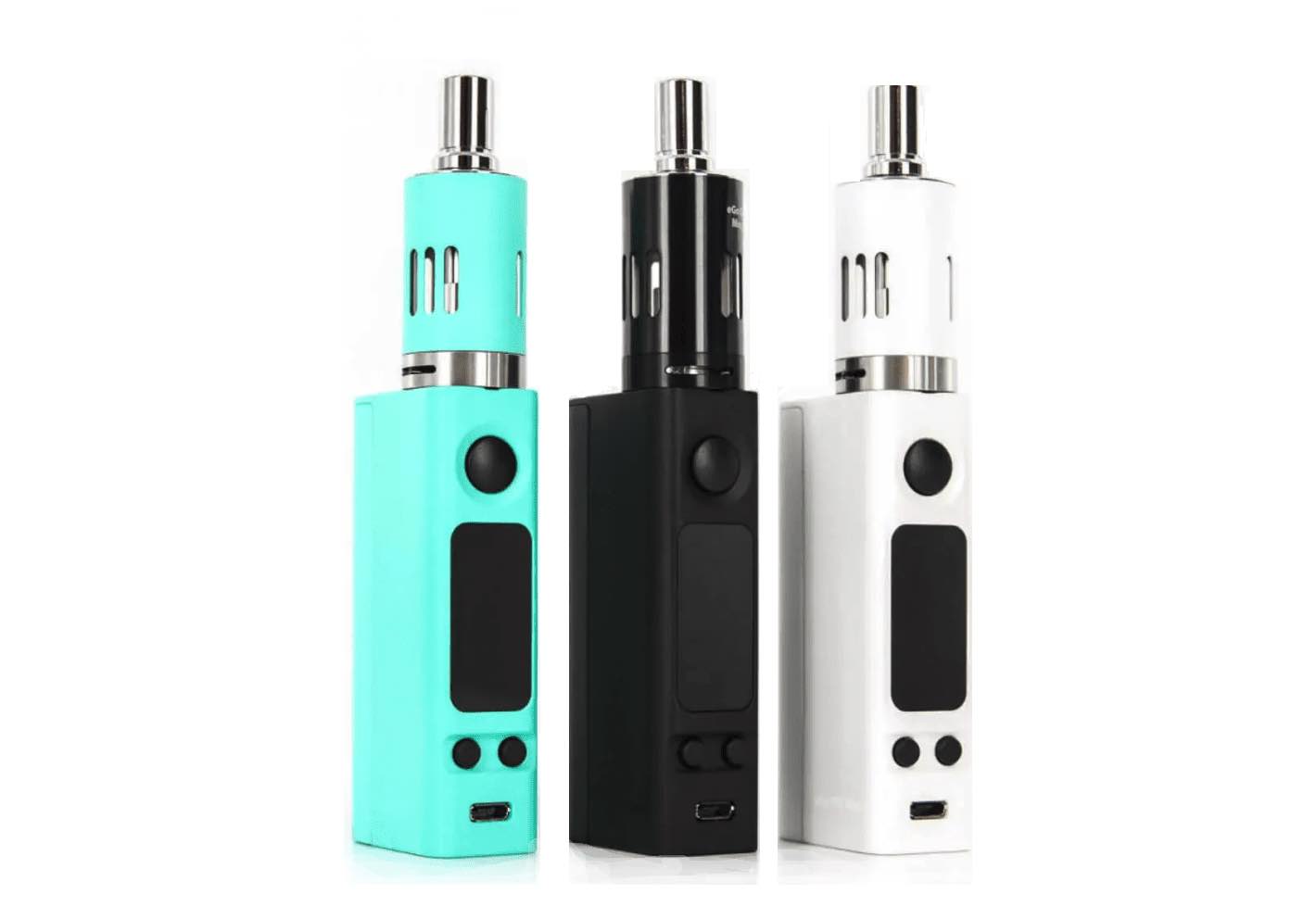 The JoyTech VTC Mini has wattage, temperature control, and wattage mode. It also supports titanium and nickel coils, which are used when the vape is in temperature control mode. In addition, the Ego One Mega has excellent flavor and produces high levels of vapor.

Finally, vape is easy to use. Learning how to cycle through the menu and adjust the settings does not take longer than a day to learn. This is thanks in part to the well written JoyTech eVic VTC Mini manual that covers everything about this vape, leaving nothing to chance. 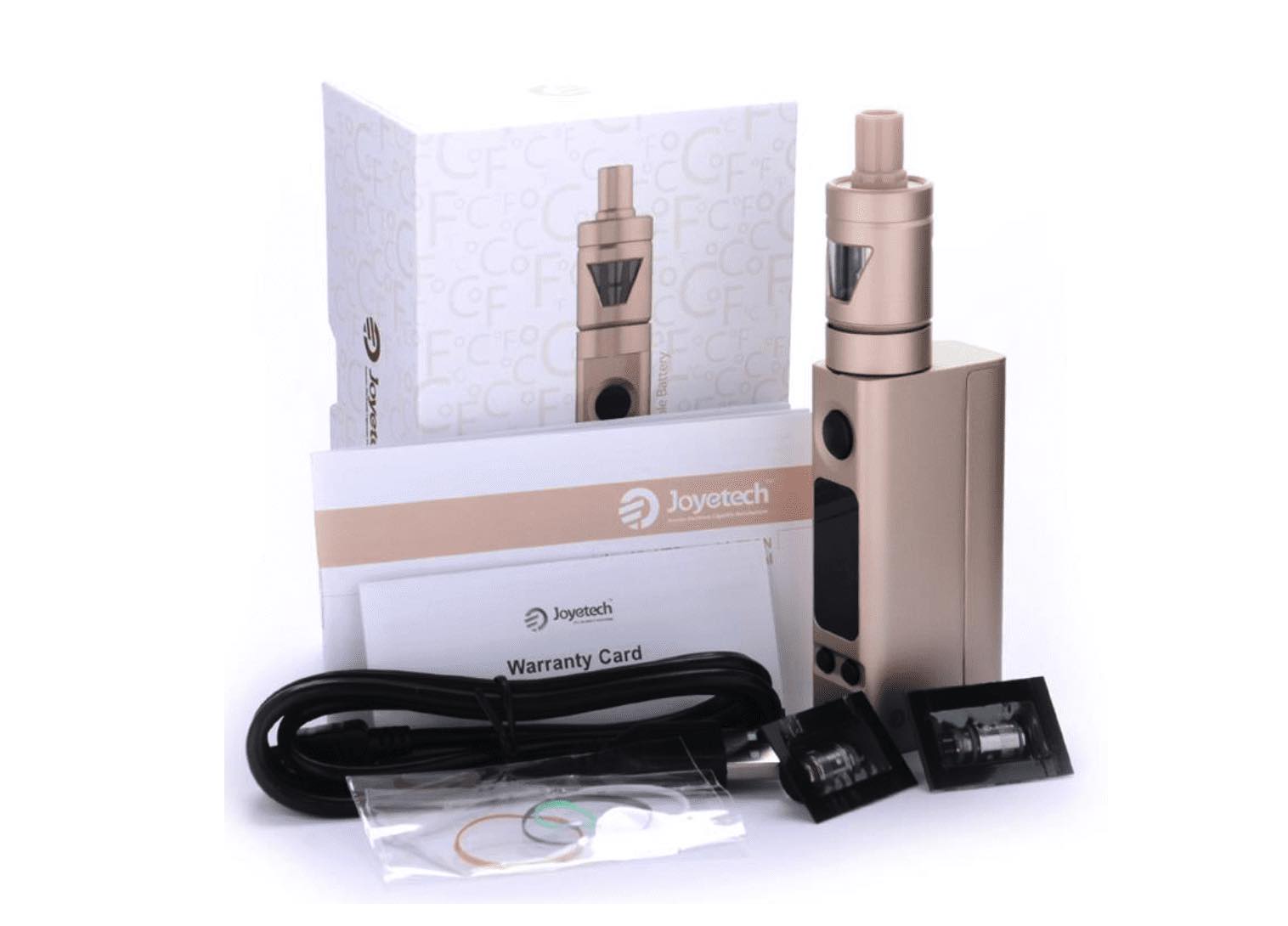 The JoyTech eVic comes with an eGo One Mega, USB cable, and nickel and titanium coils. The USB cable can be used for upgrading the firmware and charging the batteries while they are inside the box mod. Unfortunately, it does not come with a regular coil for wattage mode.

The outside looks outstanding. It is available in black, grey, white, light blue, gold, and red. It has a soft coating that makes it fit the hand better and does not attract dust or lint. Be careful handling it, though, because the surface will chip if the vape is dropped.

Another excellent design feature is the placement of the USB port. It is positioned just above the base of the 18650, so it can stand upright as it is being charged. 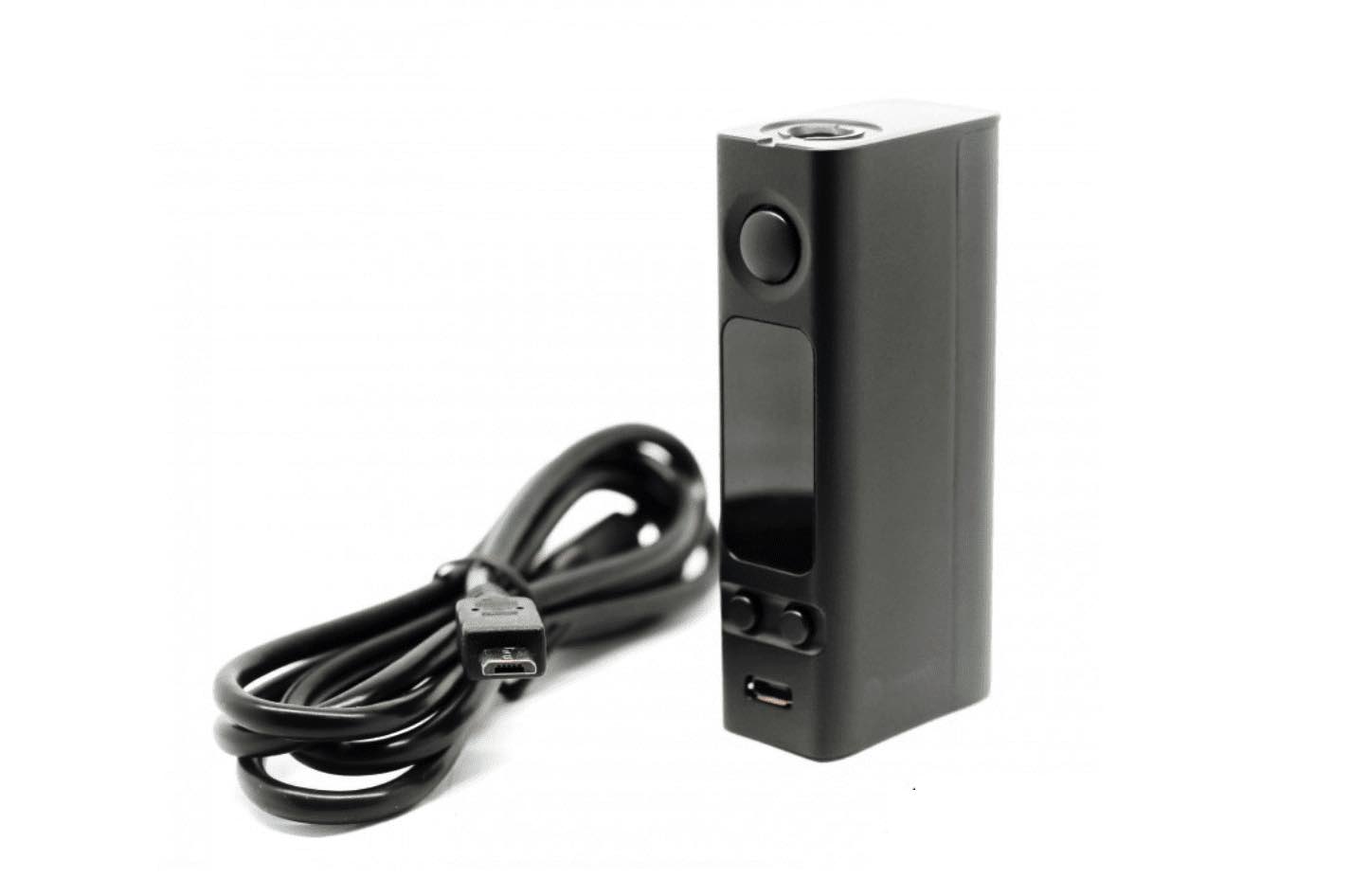 One major flaw in the design is the battery bay. It is tight and holds the 18650 firmly in place, but the spring in the top part of the terminal does not go in far enough. The result is that the battery scrapes against the bottom, resulting in the wrapper scraping away.

This problem is common in a lot of mods. The way to avoid this is to be very careful when putting the 18650 into the box mod. Do not force it in and be extra gentle with it. Buy extra battery wrappers just in case.

The screen is one of the best in the industry, measuring 0.96 inches and displaying all the information in bright, easy to read white letters against a black backdrop. Info such as temperature, wattage, ohm level, and battery life is shown on the screen.

Charging the 18650 is easy since it does not have to be removed. Just plug the USB cable in and let it charge. It will finish charging in three hours after being plugged in. Fortunately, it has pass-through charging.

JoyTech eVic VTC Mini Review of the eGo One Mega

The eGo One Mega comes with the starter kit. It has 4 ml juice capacity, and it has two adjustable airflow slots. The airflow can be adjusted by turning the metal at the base. Choose between wide open and restricted airflow. The eGo One comes with titanium and nickel coils that use organic cotton for the wicking. All of these features make for excellent flavor and airflow.

Stainless steel surrounds the glass, making it very durable. On the flip side, this makes it a little bit challenging to monitor the level of the e-juice. To avoid dry hits, pay extra close attention to the small e-juice window.

The big problem is that it cannot be disassembled. If it breaks, the vaper will have to buy a new one. Another problem is that it occasionally spits back hot e-liquid. These problems were not that big of a deal, though. Overall, the device performed well.

The eVic Mini is 510 threaded so that it will work with most cartomizers, atomizers, and other systems. Those who do not like the Ego One can easily find another device.

How to Use the JoyTech eVic VTC Mini

The JoyTech eVic VTC Mini is easy to use. 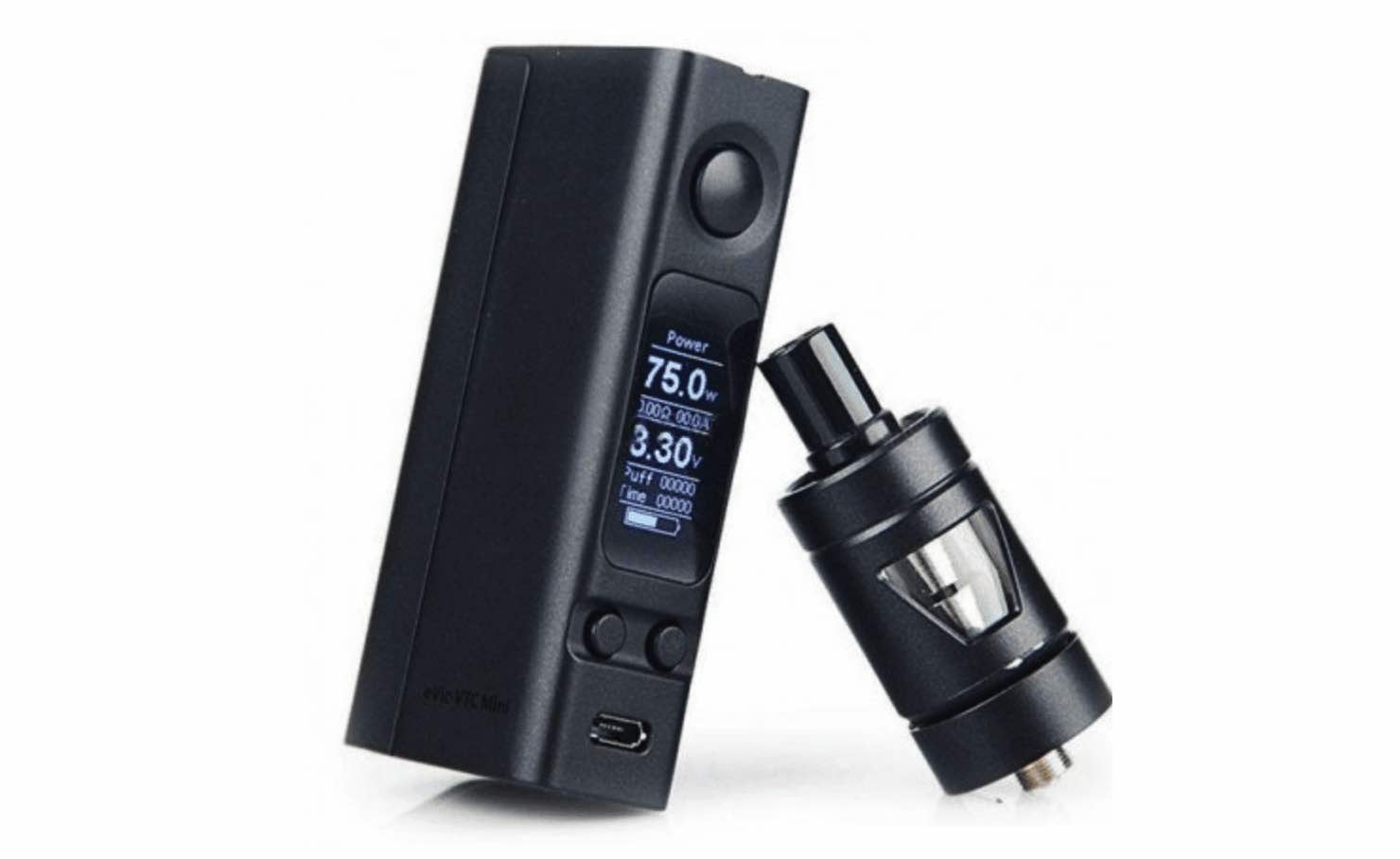 The JoyTech eVic VTC Mini handled all of the coils and tanks marvelously. The battery life was excellent, especially in temperature control mode. Most importantly, the vapor and flavor are fantastic. It produces enough vapor to fill an entire room with clouds.

The sweet spot for excellent flavor and thick clouds for this mod is between 550 to 600 degrees Fahrenheit. Finally, when the eGo One is filled with an adequate level of e-juice, there are no dry hits.

The dreaded “no atomizer” warning might appear on the screen occasionally. On this mod, the most likely reason this message is appearing is that there is a short in the battery.

As written earlier, the wraps for the 18650 can come off because of how tight the fit is in the battery bay. This can cause a shortage. Solve this problem by rewrapping the 18650 or replacing it with a new one.

Other causes can be a poor connection between the tank and battery, or the coil is not seated correctly. If it is a 510 connection problem, make sure it is connected properly and clean the connection. If the problem is with the coil, take it out, screw it back in, or use a new one.

This can happen after the first month of vaping. The way to solve this problem is to change the coils and clean out the tank. Another reason this could be happening is that it is being vaped in the incorrect mode.

Try switching between nickel and titanium modes. Doing this can significantly improve the quality of the vapor. If changing the coils, cleaning the tank, and switching modes do not help, buy a new tank. 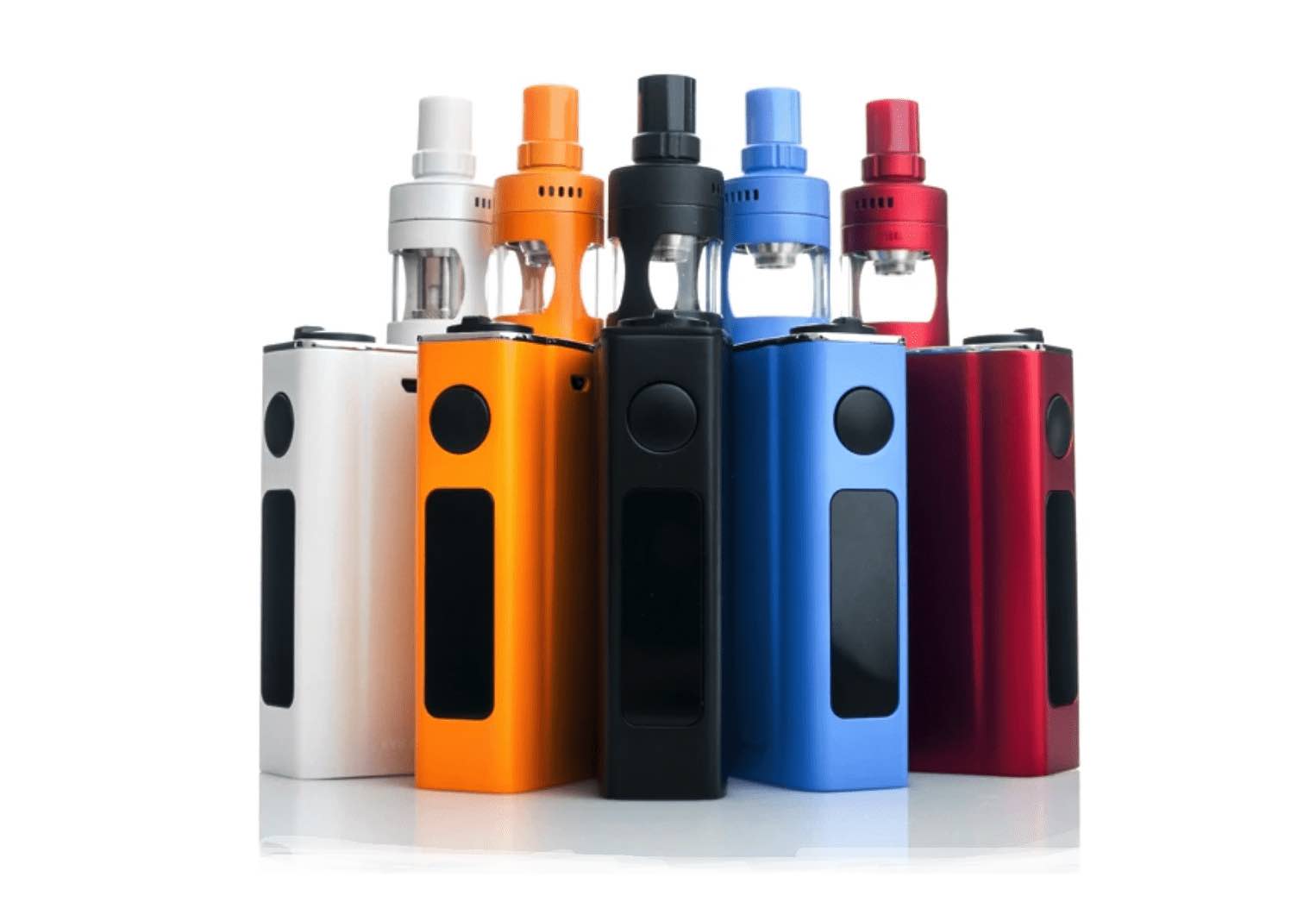 The eVic VTwo has a lot of features that make it worth considering over the Mini. The first significant difference is that the VTwo has an internal 5,000 mah battery that is a real powerhouse. Those who like mods with internal batteries will love this feature. Also, the JoyTech VTwo fires five watts higher than the VTC mini.

The iStick Pico is also an excellent product that goes up to 75 watts. It is also the perfect vape for someone looking for an ultra-portable device. The edges are more rounded than the JoyTech VTC Mini’s, so it will fit more comfortably in a pocket. 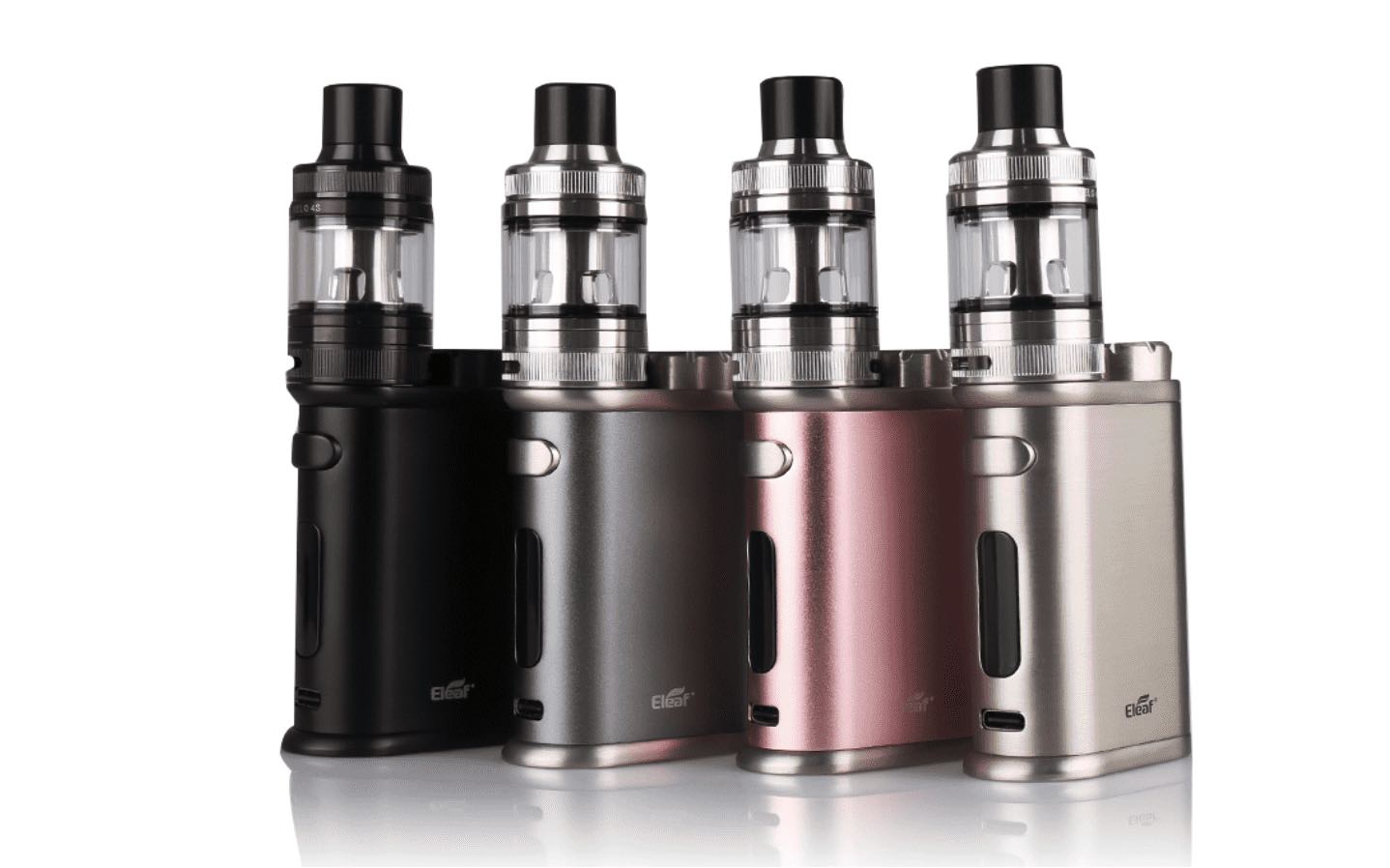 The main drawbacks to this device are that the tank with which it comes only holds 3 ml of juice and that the plus and minus buttons are on the bottom. The juice capacity of the JoyTech VTC Mini’s tank is higher, and its adjustment buttons are better placed.

The JoyTech eVic VTC Mini is an excellent device, especially for those who like using replaceable batteries. The battery will last a long time, especially on temperature control, which makes it desirable for people who might be away from a wall socket for a long time. Additionally, the coating makes it perfect for those with sweaty palms.

The features found in this device all add to the performance. Of all the features, the best is temp control mode because of how much it extends the battery life and juice levels in the tank. Bypass mode is another excellent addition, especially considering that it takes a long time to charge.

There are some things people will not like about it. The coating chips and the 18650 compartment can damage the 18650 wraps. If you have experienced these issues, please let us know. If you have not had these problems and everything has been perfect with your mod, let us know that, too!