Dovpo is a vape company unheard of by me, and now we have their box mod entry, the Dovpo Trigger 168W mod. The Dovpo Trigger comes in a stand-alone package since there is no accompanying tank or atomizer in the kit.

The Dovpo Trigger does not seem to be breaking any barriers since there isn’t anything new that it is bringing to the table. Except, there is something that the literature on the Dovpo purports to be different, and we’ll take a look at it later.

The Trigger comes beautifully packaged in a pentagonal-shaped case that gets pulled off to reveal what’s inside:

There seems to be a lot to the Trigger regarding its visual features. The “innovation” is the separate “Set” button that you find on the front-facing side of the mod, right above the 0.96inch OLED screen.

The actual firing/power button on the Trigger is located on the back of the device, on the battery door. The reason for this separate-button setup is to eliminate the need for complicated button combinations necessary to learn and memorize to access various secondary menus on the chipset.

That’s what the “Set” button is supposed to do, in theory, but we’ll see later how it performs. The Trigger has that three-sided shape that many dual 18650 battery mods copy since it makes the most ergonomic sense.

The Trigger comes in three different color patterns; a blue/turquoise, an all-black option, and a rainbow-colored one. And aesthetically, the Trigger does undoubtedly have some details about it that stand out. The gold-plated firing button and 510 connector pin do stand out, especially with the all-black version, and they not only serve a function but do visually improve the device’s appearance.

The first thing to mention would be the sticker accents (black matte for all versions) located on both sides of the mod. They do not take up the entirety of the side panels, like with some devices, but they do add a little edge to the overall look.

And thankfully, the stickers are recessed into the build of the mod so they won’t come off easily. Some mods have only LED lights; some mods have just stickers, but the Trigger has both.

The back battery door is held in place with magnets and is also quite hefty for a battery door. But when you take it off, you’ll discover the reason behind all that weight. The door is where you’ll find the Dovpo logo cut into it, which also contains a few LED lights inside that light up whenever you press the firing button.

There are several airflow vents above and below the sticker panel that is covered from the inside with a wire mesh but also light up whenever you fire the device. Back to the front of the device, you’ll find two selector buttons above the centrally-placed “Set” button. And right underneath the screen, you’ll see the USB charging port.

It takes dual, removable 18650 batteries loaded into the device from a back-loading battery door. The cells can supposedly bring the device to a 168W maximum, but I’m skeptical if the device can genuinely reach those levels.

I’ve reviewed a few devices recently that have boasted such astronomical power levels but did not deliver. And 168W seems like such an arbitrary number that I’m starting to doubt whether the Trigger can keep its word.

How to Use the Dovpo Trigger 168W

When you hold the “Set” button for five seconds, you can then access the menu that controls the different vaping outputs on the Trigger. Internally, the Dovpo Trigger does feature some rather innovative options. The main ones are the curve settings that you can employ in either variable wattage mod or all three of the temperature control modes, nickel, titanium, and stainless steel.

The menu is top-down, so you don’t need to flip your screen or the mod to read out what it is saying, and since you just use the “up” or “down” button and the “Set” button to make your selection, it couldn’t be easier. There is no option to deactivate the LED lights on the mod, although you do have a puff counter and an option to change the language on the mod.

The Paranormal DNA166 from Lost Vape is an excellent mod loaded with features like a vivid OLED screen and the DNA 250 chip that makes it very responsive and hard-hitting. However, it is priced more than $100 more than the Dovpo Trigger. The Paranormal is an excellent vape for those who have that kind of money to spend. But the Dovpo Trigger is better suited for those who want something almost just as good but less expensive.

The asMODus Minikin Reborn is better than the Lost Vape Paranormal price-wise, but it is still $20 more expensive. Additionally, while it has many modes and several other great features, it does not provide consistent output in temperature control mode. Also, it hits a little harder than the Dovpo Trigger (a little too hard).

For my first outing with a Dovpo device, I must say I was neither over or underwhelmed. The mod itself may have lost some other reviews for the tasteless stickers, LED lights, and gold-plated fixtures, but I liked them for some reason.

I liked the addition of two of my favorite features on Vaporesso devices. Those features are the independent selector button, or “Set” button that freed up the firing button and made for more comfortable screen navigation. The second was the multiple curve options that add something to your vaping experience.

The Cascade tank worked incredibly well with the device, and I was pleasantly surprised to vape a device that delivered on its stated maximum power output. 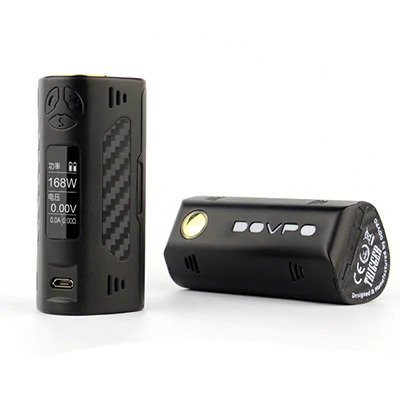