The Asmodus Minikin V2 is an updated version of the Minikin box mod that has several, state-of-the-art updates. This touch screen mod has a maximum wattage of 180W compared to the older mod’s 120W limit.

The new V2 also features an advanced GX-180-HT chipset that gives vapers more control over the mod’s various outputs like power mode, TC and curve mode. The Asmodus 180w mod is still a dual-18650, but it now features a responsive, OLED touchscreen.

The vape also supports firmware updates and has several safety features common on most box mods. The Asmodus Minikin 180w touch screen mod does not have a typical box-shape, like other products in its class. Even with the touch-screen, the mod is about the same height as the batteries it uses. 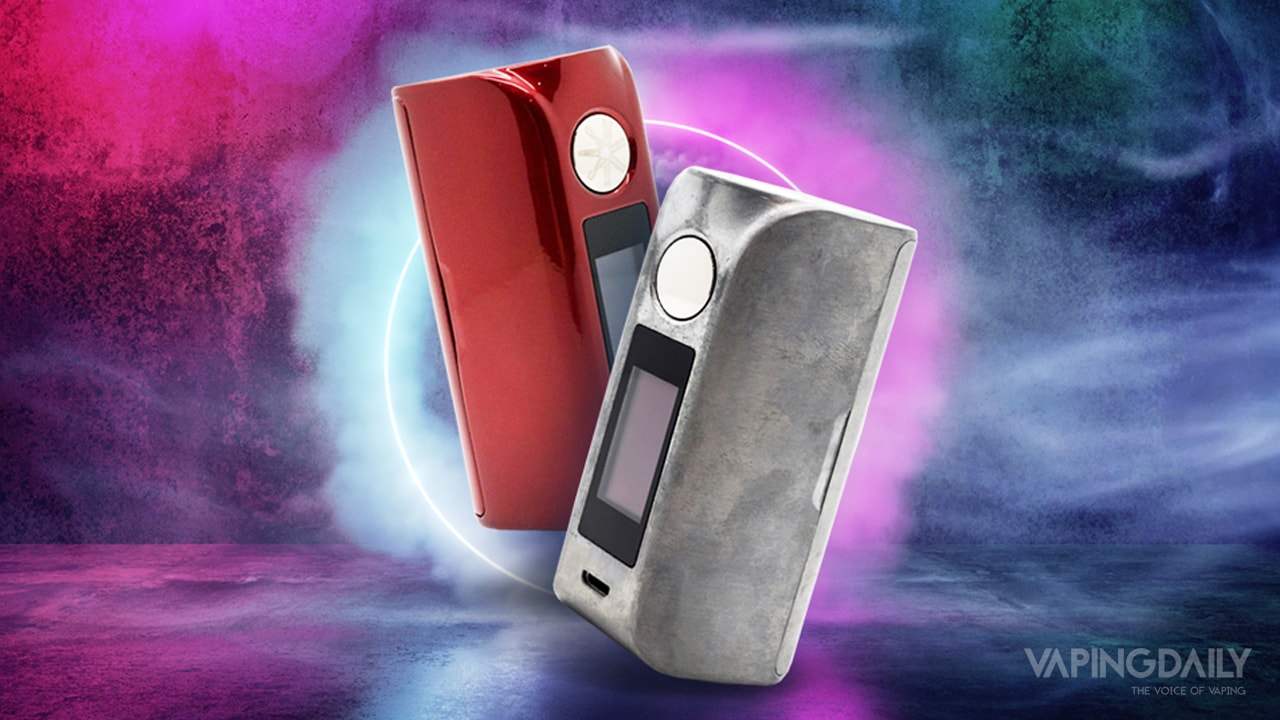 The Asmodus Minikin 2 comes as a stand-alone mod, with no accompanying vape tank or atomizer. It features simple packaging, in which comes the following:

The first thing vapers will notice about the Asmodus Minikin 180W is its shape, and then maybe the touch-screen. The original had a different style battery bay, where the cells were stacked one behind the other, giving the first Minikin a square, box-shape. 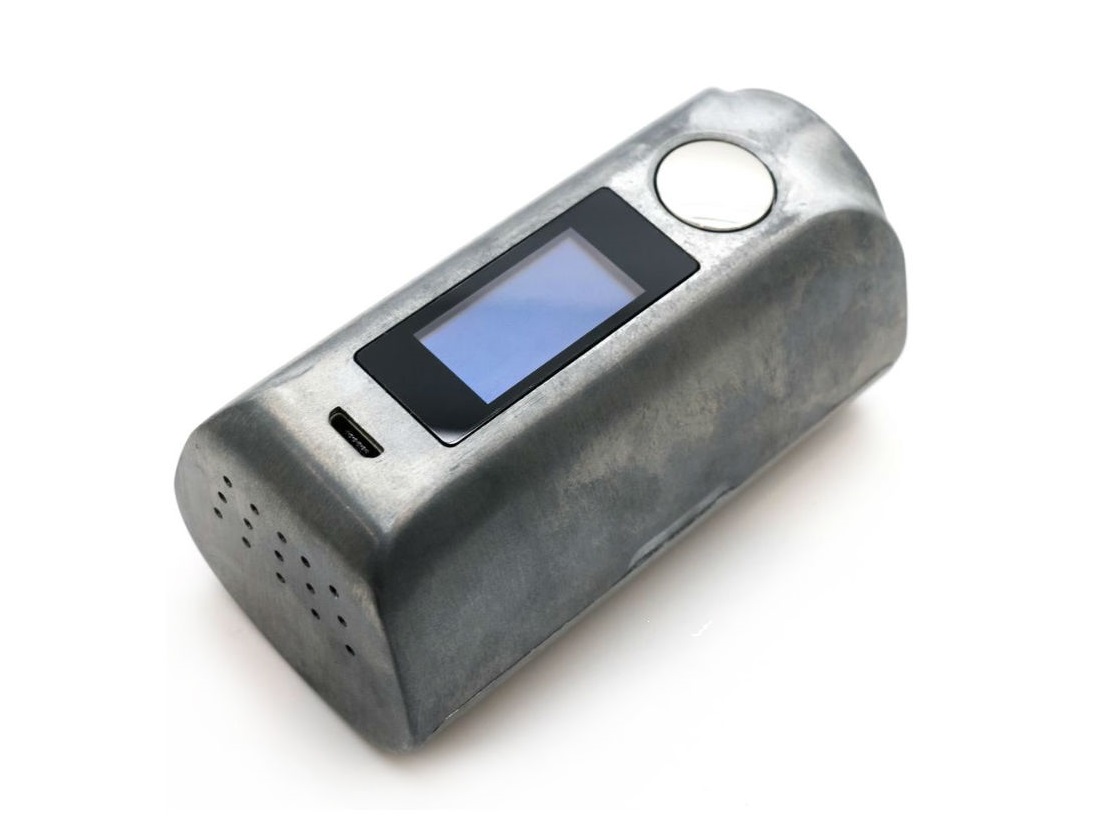 The new Asmodus Minikin V2 has the same form factor — rounder, more full — as other dual-18650s wherein the batteries fit side-by-side into the mod’s posterior.

The touch screen mod has a back battery door that stays in place with a magnetic connection. There are two spring-loaded, silver-plated contacts on the base of the bay. There is also a battery strap for easy installation and removal of the cells, which is a nice touch. 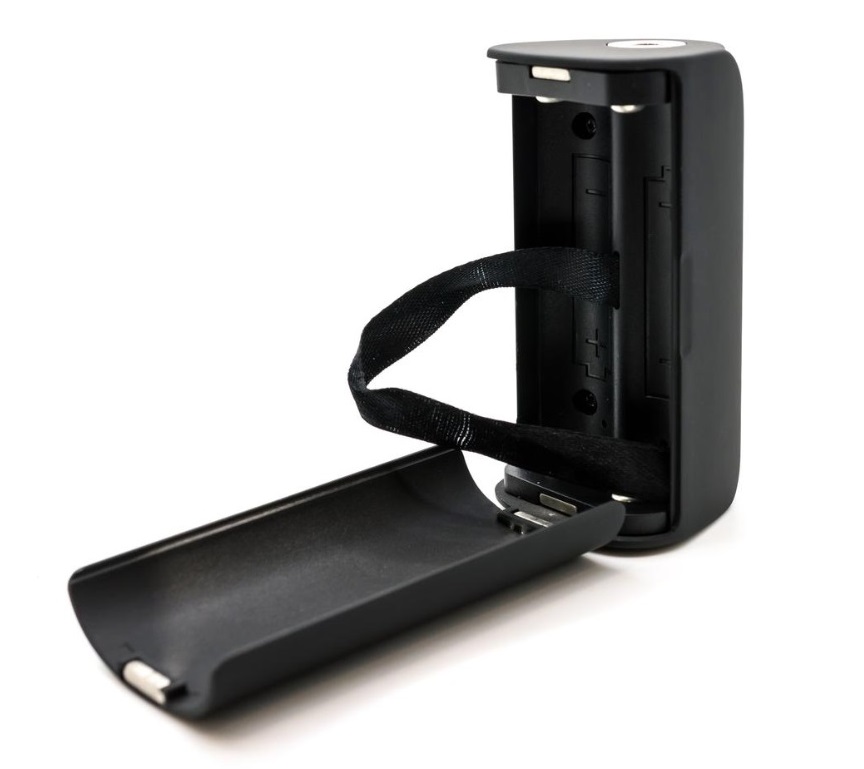 Interior components of the mod are zinc alloy. Its exterior features a soft, rubberized material that makes the V2 comfortable to hold than similar box mods. The mod is very compact and fits easily into the hand. The side opposite the battery bay door is where users can find the operating interface.

The older unit had two up/down buttons on the side for users to make adjustments to their vape. The V2 has a 1 inch OLED screen that acts as its sole control panel. The display functions much like a smartphone’s touchscreen, where users need to slide to unlock the screen or access the device’s features.

Atop the screen is a large, circular firing button that sits flush with the rubberized wrap around the entire mod. At the bottom of the display is a USB port that users can utilize for firmware updates to the GX-180-HT chipset. There are also several ventilation holes on the base of the unit for the two cells inside to vent.

Minikin V2: Up Close with the Box Mod Touchscreen

The previous Asmodus Minikin had two selector buttons on its side for user control of the screen. The V2 eschews those extra buttons and allows for complete user control through its touchscreen. The display is only 1 inch long, but it can hold an astonishing amount of data.

The main screen shows things like coil resistance, voltage, battery life, puff counter, and in which mode the unit is set. To activate the settings and features of the device, users need to first unlock the screen by swiping down.

After that, they need only press on the function they want to change. For example, pressing the wattage readout goes into power mode where users can then make adjustments. Pressing on the ohm symbol lets users set their resistance, etc. 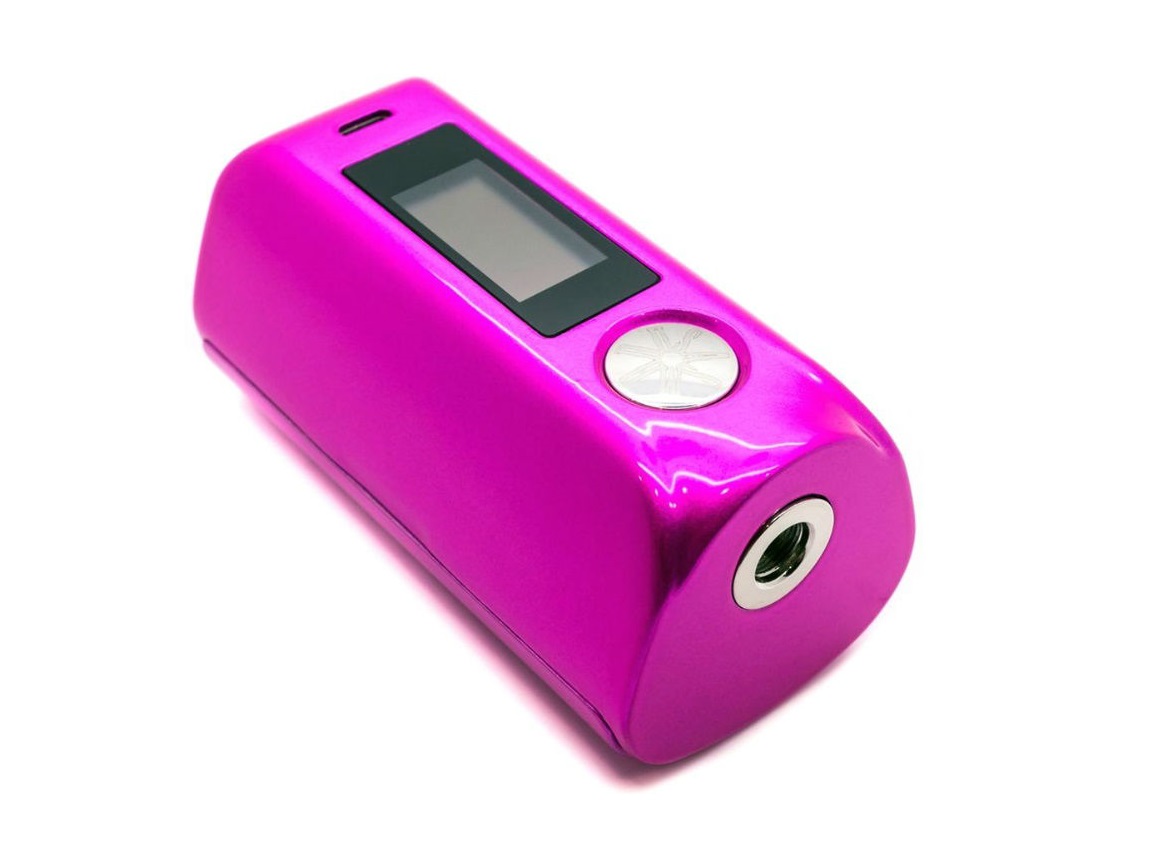 The touchscreen is very responsive, but it does not respond to the slightest touch. A user needs to press down to make the touchscreen work. Pressing on the “mode” icon lets users select their preferred vaping output. This mod features variable wattage mode, temperature control, a curve option for wattage mode, and TCR or TFR, which are two specific temperature control options.

The Curve feature on the GX-180-HT chipset allows for curve settings in wattage mode, up to 180W. Users can change their wattage level from 1.0W increments, for a range of five different presets. The touchscreen also allows users to make changes to the display itself like setting the preferred brightness of resetting the puff counter.

The original Minikin was also a dual 18650, with a GX-120 chipset inside. That box mod had a much smaller OLED screen, not a touch display, with two control buttons on its right side. Users pulled off the backside to install or remove the two cells that worked in series, and also featured spring-loaded stainless steel connectors. 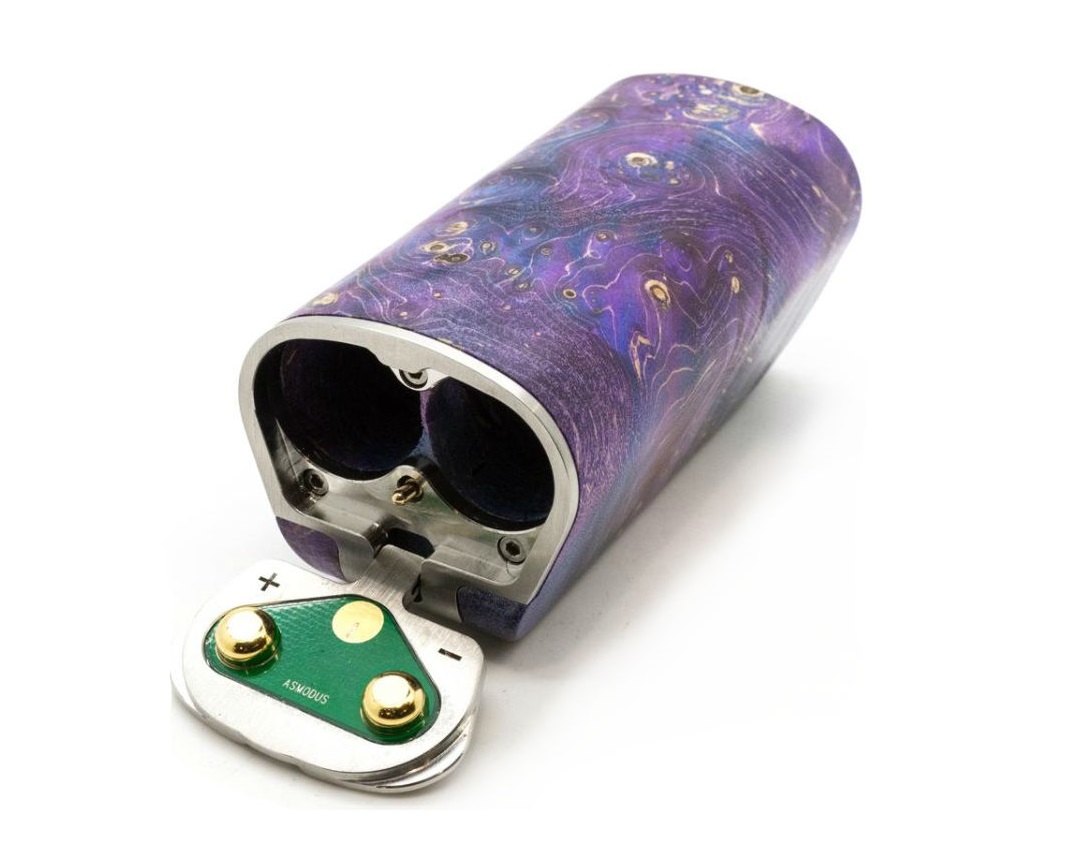 The Asmodus V2 version has a different battery placement, which changes the overall shape of the unit to make it stouter like a box mod, but also more compact and ergonomic. The most obvious changes between the old and the new mods are the internal capabilities of the second generation Minikin.

Where the first Asmodus only offered power mode and temperature control, the updated touchscreen mod can do much more. Vapers can use the Curve setting to perfectly calibrate the power output of their vape down to the second.

The temperature control suite features two variations on TC that are far more advanced than the typical, TCR and TFR. Users can also download the firmware from the Asmodus website to install on the board to increase its capacity or unlock other special features. The most notable difference is also the OLED touchscreen that amps up the entire user experience, making the mod’s functioning more fluid and straightforward.

The Asmodus Minikin 2 Review: Ease of Use

With its wide range of vaping outputs, the Minikin V2 can satisfy almost every style of vaper. There is no bypass mode on the chipset, which is strange since many contemporary products do carry this option. The mod, as it is, can still put out a massive amount of cloud cover.

The preciseness of the controls means that vapers can fine-tune their vape down to the second or watt with just a touch. The response, not only of the touchscreen but of the chip inside is remarkable. There is no lag in the device’s functioning, as it fires immediately and switches between modes quickly and with ease.

The primary firing button is ultra-responsive to the touch. It gives off a nice “click” sound, and never got stuck. The power output on the box mod is also something to behold. The unit smoothly goes up the highest setting and does not falter at those levels. 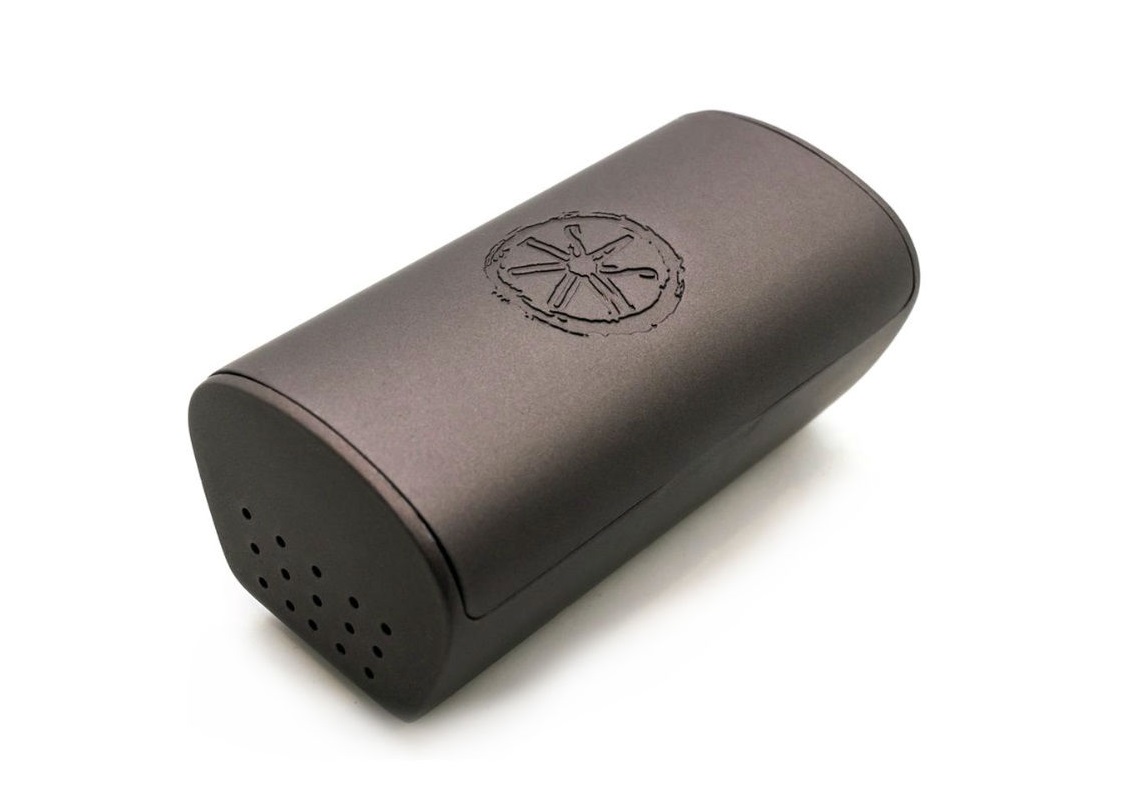 Users can change the wattage in 0.1 increments beneath 100W. The board gets to the maximum very fast, but it does not round-robin back to 0W.

Turning to the Curve mode on the Minikin takes only a few swipes and taps of the menu. The touchscreen works well in this capacity, in that it is easily accessible when holding the product. The smooth feel of the exterior material also improves the user experience.

In Curve mode, the screen shows a straight, vertical line, with several nodes running down it. The line goes right down the middle with one side representing wattage and the other representing seconds. Vapers need only tap and drag their power setting to where they want it, and then do the same for the duration.

The Asmodus Minikin V2 vs. the SX Mini G Class vs. the Wismec Reuleaux RX Gen3

From one advanced chipset to another, the SX Mini G Class also features a cutting edge control board, the industry-leading SX550J chipset. The Mini G Class is also an update to an older model that features a 200W maximum output and has both single and dual 18650 capability. The Mini G is not a touchscreen but uses a joystick-like control to navigate the user menus. The G Class does feature Bluetooth compatibility and users can download an app to access more features.

The RX Gen3 is a triple-18650 device with a similar form-factor to the Minikin V2. The Wismec device can reach a 300W maximum and uses a large 1.3 OLED display for user control. It carries all the most basic vaping outputs like wattage and temperature control. The RX Gen3 has a hinged battery door instead of a magnetic connection, and it also takes firmware updates to its operating system.

Is It One of the Best Vape Mods?

Were you a fan of the original Asmodus Minikin ? What do you think are the best improvements/updates to this version? The touchscreen? Was there something about the previous mod that you wanted to see on the new one? What is the best feature of the Asmodus Minikin 180w? If you have something, you want to say about the Asmodus device feel free to send us your comments.

The Asmodus Minikin V2 is a significant step-up from the original. The addition of more advanced chipset and touchscreen are just two of the improvements found on the mod. The device runs at super-fast speed, and it can indeed reach its stated maximum wattage of 180W. The compactness of the mod also makes it a delight to use.

Users can merely wrap their hand around the device, and it becomes enveloped. Instead of a hard-edged form factor though the rubberized exterior feels soft and comfortable. There are over eighteen color options, all of them reflect how cool, and sophisticated the mod is on the inside as it is on the outside.