XTAR VC4 Review: A State-of-the-Art Charger for All Batteries

The XTAR VC4 is a four-bay USB battery charger that takes both Li-Ion and Ni-MH batteries. The VC4 is an update to the VC2, which only had a two-battery bay configuration. This new version of the VC also features a top LED that shows important information like charging status, maximum voltage, and current.

Users can charge different battery types individually and monitor the status with the tachometer-like display. The four bays have different charging speeds.

Up-Close With the XTAR VC4

The XTAR VC4 has a four-bay section that uses adjustable rails to accommodate several battery sizes. Users can charge AAA batteries to something as big as 26650 cells, in which the wide-mouthed bays can easily fit. The four-bays are an upgrade from the VC2 charger, also from XTAR, that only took two cells at a time. 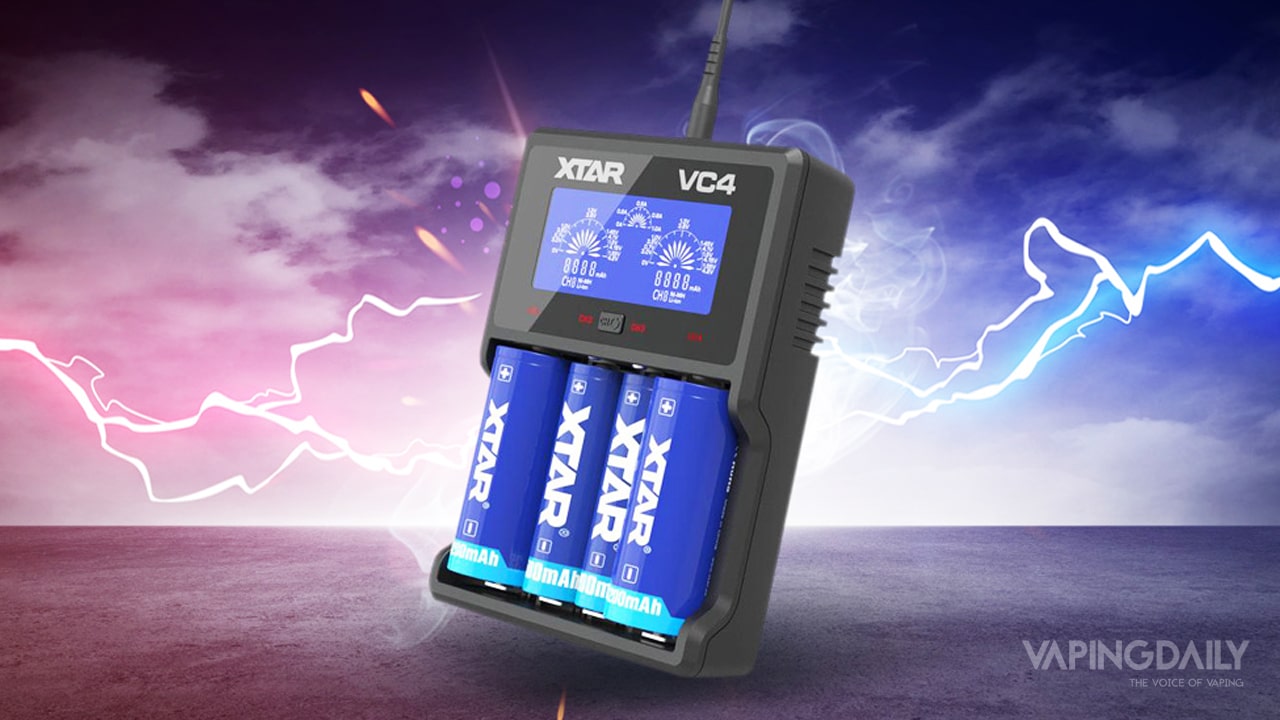 The VC4 can charge four different battery types independently and at the same time. The top half of the charger XTAR features the backlit LCD that shows users all their information. The display shows the maximum current of each cell, the charge put into the cell (displayed as mAh), as well as any error messages.

Each bay has its separate LED indicator that shows “green” when a charge is complete, or “red” when the cell is still charging. There is a single, central power button at the bottom of the LCD that users can press to switch between the bays to check the status of the cell.

The display will only show the status of two charging batteries at a time. Users have to press the button to check the status of the other cells if they are using all four bays. The button also allows users to control the display itself, as they can choose to turn off the backlight, which dims the screen but makes it visible if there is another light source.

What Comes in the Box 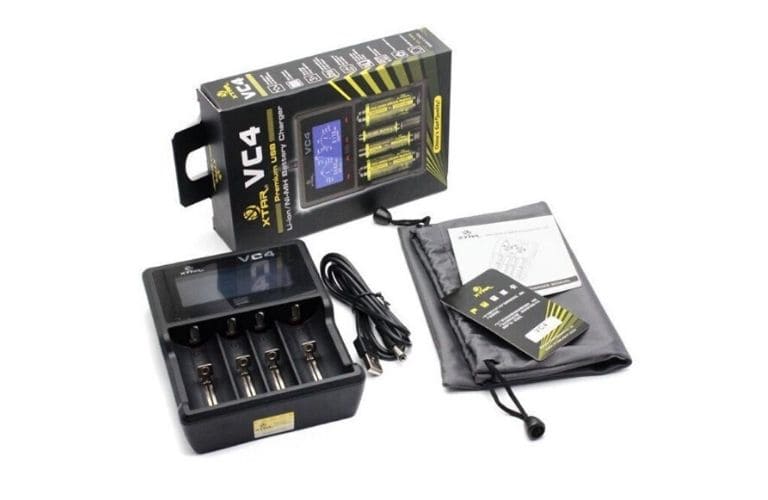 The XTAR VC4 charger comes with a few goodies and accessories to keep the device in good working order. Users will find several cables and even a carrying bag to take it out on the road.

How the Charger Handles

The unit itself is wide and large, given that it has four battery bays that can also take larger batteries. The XTAR has a single output slot for external USB charging although the connection is a DC-12 barrel connector. There is also a list of compatible battery types printed onto the back of the unit.

Users have to plug in the provided USB cable to charge the internal cells. The unit does not come with a compatible wall adapter, although XTAR does sell them separately and for different countries. Users will have to use any compatible USB wall adapter to provide the unit with a power source.

The sliding rails of the bay can fit several battery types and there are raised markings along the surface that tell users what charging rate the bay can do, as well as the positive and negative ends. The device also has ventilation slats along the top section that keeps the charger and batteries cool.

Interesting Things About the VC4

The battery charger has several safety features, as well as other characteristics that make it efficient and easy-to-use. The display will show an “Error” message when users install cells improperly, that is, in the reverse way, which is the unit’s reverse polarity protection feature. Another important feature of that charger is the soft-charge function.

For cells that have no voltage, the charger will only send a soft current into the battery for a few minutes, before ramping up the voltage to normal levels. This soft-charge feature is so the battery begins charging, but it is not overwhelmed with too much power at the outset.

The VC4 can read each cell and apply the appropriate voltage for that cell. When the battery charger is plugged in, simply insert any size battery into an individual slot. Users can instantly read the charging speed, which is what the top dial displays, up to 2A.

The other two dials show the voltage and mAh of the installed cell. The main dial shows the charging rate displayed in seven-unit increments that range from 0V to 4.2V. The mAh capacity is shown underneath the dial.

The charger is very simple to use. Users first need to install the plug into the back and then attach it to a compatible USB wall adapter. As soon as it is plugged into the adapter, users can start the device simply by installing a compatible cell into one of the bays. The LCD will light up instantly, and the selected bay’s LED light will flash red to indicate that it is charging.

Unused bay LEDs will show green until they are occupied. They turn red when charging, and turn green again when finished. Users can press and hold the central button to switch the backlight on or off, depending on their environment. The button also serves to switch in between the readings on two bays when all four bays are in use.

When there are only one or two cells, the LCD will only show information about those cells. When a cell is charging, the last digit of the mAh reading will start flashing, and slowly increase as the cell charges. After the cell reaches its full charge, reading will stop flashing.

The full listing of compatible batteries is displayed on the device’s back end, as well as on the packaging and in the user manual. The VC4 can take any Li-Ion or Ni-MH cells, while it is also compatible with alkaline or Ni-CD batteries like typical A, AAs, AAAs, or even C and D-type batteries. The bays are large enough to accommodate even three 32650 cells, which are the largest in its class with the middle space left open for a smaller cell. The charger is compatible with standard vaping batteries like 18650s, 21700s, and 20700s.

The display is clearly-organized and easy-to-navigate. The single operating button means there is not a lot of navigation that needs to be done but the LCD becomes second-nature after it is in use for a while. Users can press and hold the button to disable the display’s backlight function, in case you are running it overnight.

The display still functions, and remains visible, just not with as much illumination. Even without pressing the button, the LCD will dim after a few seconds of no use. With a cell installed, the device will read and automatically display its current voltage, its capacity and start charing it at the appropriate rate.

The top-center current dial shows at what rate the batteries are charging. Users can either use the two middle bays for 0.5A charging or the two outer bays for 1.0A charging, depending on the cell. Users with cells that use higher, 2A charging will have to use an output adapter.

The Nitecore D4 is another four-bay charger that can take Li-Ion and Ni-MH batteries, as well as IMR, Ni-CD, and AA, AAA, C batteries. The D4 uses a top LCD intuitive display that shows users the relevant information like voltage, current, and capacity (mAh). There is also a small “Mode” button on the unit’s side that users can press to check the settings of different cells as well as choose different charging modes. 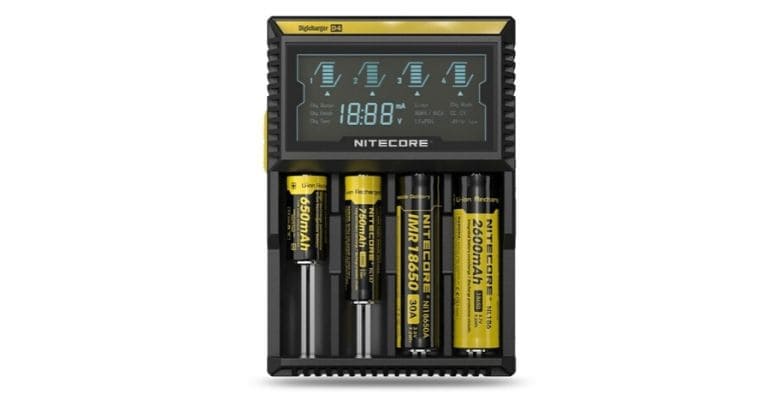 The Nitecore D4 also features an intelligent chip that can detect and automatically set the appropriate charging current for installed cells. The unit also comes with two external power outputs, one is a 12VDC slot and the other is a heavy-duty 100-240VAC.

The VC4S is an update to the VC4 charger that can also take four batteries into its four slots. The VC4S can also take several cell types from Li-Ion, Ni-MH, Ni-CD, and even C, D, an AAA type alkaline batteries. 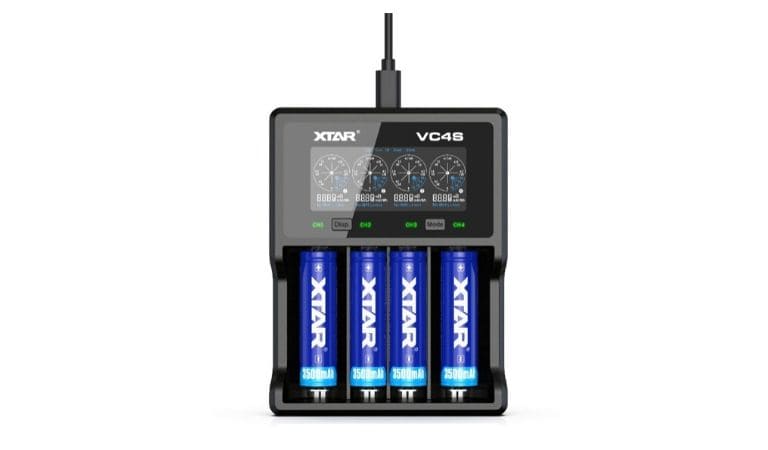 The new XTAR charger has an intuitive LCD up top that displays all relevant information. It can automatically detect cell types and then apply the appropriate charging rate, while it also comes with several safety features. The VC4S also uses a universal USB charging port, while it also supports 3A fast-charging with the appropriate 3A adapter attached.

The XTAR VC4 charger is a simple, easy-to-use device that comes loaded with safety features. The unit is very simple to set-up and it only has one operating button on its front. The LCD is bright and shows important information, as well as warnings and error messages when something is wrong with the device.

The many battery types that it takes means that the VC4 is an excellent choice for a household charger that can be used by anyone. The device is made from flame-resistant material and it never overheats thanks to the many ventilation slats on its backside. The device does not have a compatible USB charging port, so users have to use their wall adapter to provide the device with a power source.