The Wismec R80: The Ultimate Guide on This Product

The R80 pod is capable of holding four milliliters of nicotine e-liquid. It is refillable and uses replaceable 0.3-ohm mesh and 0.8-ohm Ni-Cr coils. A 510 adaptor can be installed so that users can use their own tanks.

The R80 is an AIO device from Wismec. At first glance, it looks like a pod mod, but it is a vape that utilizes tanks with replaceable coils. This helps to enhance the vaping experience by giving the vape more versatility than what one would get from a regular pod mod. It is small and ergonomically designed. 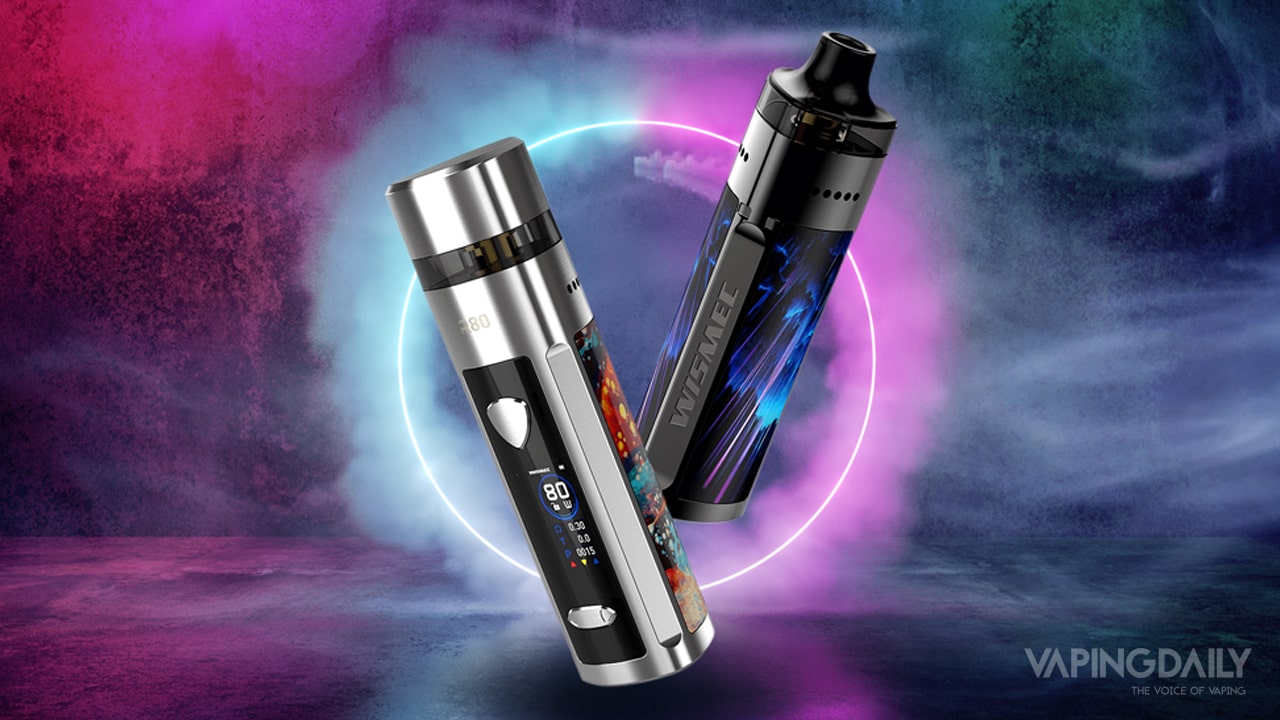 The best way to describe it would be to say that it resembles a coffee thermos. This aspect of its design and appearance makes it easy to stow away in a backpack or purse. The body is gleaming, and there are five color options from which to choose: Classic Legend, Meteor Shower, Northern Lights, Ocean Star, and Quantum World.

This vape is quite powerful, generating up to 80w of adjustable output. The amount of wattage can be easily adjusted in one-watt increments by interacting with the 0.96 inch TFT screen, which is easy to read thanks to its bright and colorful display. Shown on the screen are the wattage level, a puff counter, and the battery life. The vaper has the option to choose the color of the lettering on the screen and lock the wattage.

The coils are one of the reasons why this vape produces excellent vapor and flavor. The pod utilizes replaceable 0.3-ohm mesh and 0.8-ohm Ni-Cr coils. Both coils use highly absorbent and organic cotton. The bottom of each coil has an adjustable airflow dial. Rotate the bottom to control the amount of air flowing through the coil. The R80 pod can hold up to 4 ml of nicotine e-liquid. Customers have the option of buying a 510 adapter from Wismec, which will enable them to use different tanks if they choose to do so.

The starter kit comes with everything needed to start vaping. The package includes:

The version two kit comes with a 510 adapter.

Internal Building Quality and Design of the Wismec R80

The design and build quality of this device is acceptable, promoting efficient functionality and practicality. There is no rattling, it feels solid, and it is comfortable to hold.

Additionally, there are no leaks in the pod. The mouthpiece is round, and it could be a little bit narrower, but it does its job, and it is comfortable.

This vape uses single 18650 batteries. The battery is housed in a small port at the base of the mod with a cover that screws on and off. The cover has a small handle to make taking the cap on and off easier. Battery life is superb, and it should last just under a day to one or two days, depending on the coil being used.

The Wismec r80 Pods and Coils

The R80 pods hold up to 4 ml of nicotine e-juice, which allows for plenty of vaping time before having to refill. A plastic cover protects the rounded mouthpiece, and it slides off effortlessly. 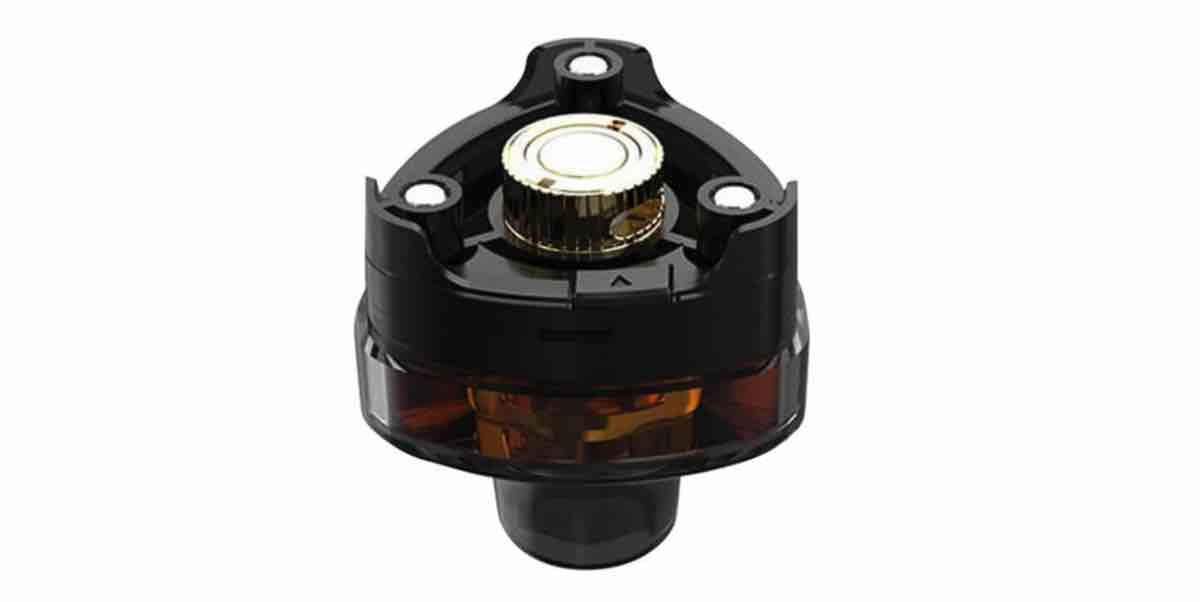 Refilling is easy, too. There is a door at the bottom that covers the refilling port. The port is wide enough so that it can be refilled without causing a mess. Three magnets hold the pod to the rest of the vape, and the whole set up holds together well.

At the bottom of each coil is an airflow control ring that rotates to open or restrict the airflow. The pod has to be taken off the vape to control the airflow. Usually, doing this would be inconvenient, but the pod comes off easily, so adjusting the airflow can be done quickly.

The coils last one to a couple of weeks if they are primed correctly and used at the recommended wattage. To get the most life out of the coils, vape them between 25 to 40 or 12 to 20 watts.

Using this vape is incredibly easy. Use the handle of the battery door to access the battery bay, insert a single 18650 inside, and then screw the cover back in. Before adding the coils, place some e-liquid onto the wicking, put one into the pod, and then fill it. Adjust the airflow, as previously indicated. There is a window on the pod that enables the user to check his or her e-juice levels.

Vaping Experience with the Wismec R80

There is nothing to complain about when taking drags off of this vape. The vapor coming through these coils is fantastic. The 0.3-ohm coil provides an intense vaping experience with dense clouds and high amounts of flavor because it can tolerate higher wattages. The 0.8-ohm coil offers excellent taste, as well. An added advantage to using the 0.8-ohm coil is that it extends the battery life immensely.

The VooPoo Vinci is a 40-watt pod mod kit that has a massive 1,500 mAh internal battery. It also has a flat, duck-billed mouthpiece, and the pods hold 5.5 ml of e-liquid, which is substantially more than Wismec’s R80 AiO kit.

The battery can last up to a full day. One of the problems with the VooPoo Vinci, though, is that it has issues with e-juice leaking onto the battery connection.

The Smok RPM is a 40-watt pod mod kit that uses 0.4 and 0.6-ohm coils. This mod works with salt and freebase nicotine e-juices, and it is powered by a 1,500 mAh battery that can last for an entire day.

While this pod mod is one of the more impressive products out there, it is expensive compared to other pod mods, and it is a little overdesigned.

Concluding Thoughts about the Wismec R80

The Wismec R80 is one of the best products of the new year; it is a first-rate 80w AIO mod. The interface is easy to use, plus the coils and design of the pod make for a great vaping experience. It can produce a lot of vapor, and the flavor is superior to similar mods. As a bonus, the 510 adapter included in the version two kit increases the vape’s versatility since it supports tanks.

Readers who have used this mod are welcome to add their comments to this discussion. Please let everyone know what you think about this AIO kit and other products we review.

2 comments on “The Wismec R80: The Ultimate Guide on This Product”