Vaptio Sleek Review: It’s All in the Name

The Vaptio Sleek is a vape pod device with refillable pods and an internal 400mAh battery. The pods can hold up to 1.5ml of e-liquid and use a unique, diatomite ceramic atomizer inside the cartridge. The pod is compatible with nicotine salts as well as a high-VG e-liquid with regular nicotine. 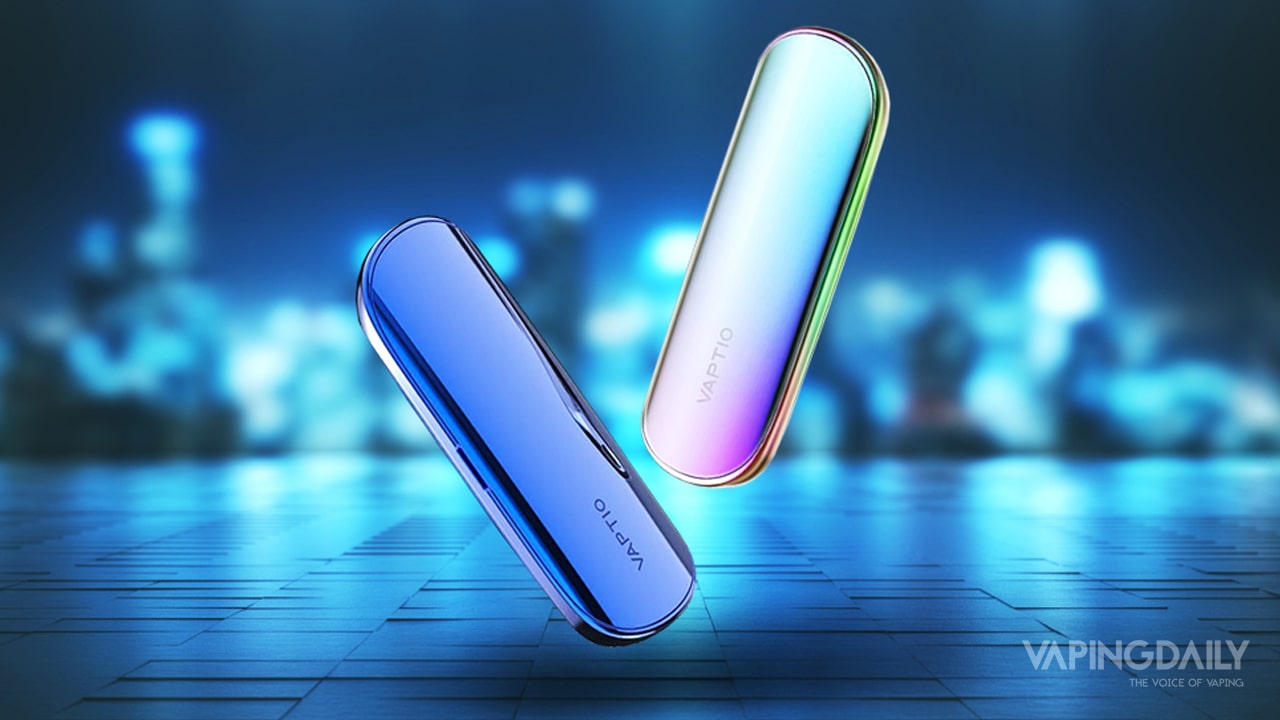 The device consists of the pod and battery housed in a shimmering zinc alloy chassis. The back panel is removable and interchangeable with one of the seven color patterns that Vaptio offers for the device.

A Closer Look at the Vaptio Sleek

The Vaptio device lives up to its name with its smooth, almost featureless exterior. The device comes with a single, refillable pod and also features a removable back panel, held in place with two magnets. The Sleek is an air-activated device so users do not have to press a button or activate the battery, other than taking a draw from the mouthpiece.

The viewing window is not always visible though. Only when users remove the back panel can they check their liquid levels, because when it is attached, it is still hard to see through the tinted plastic of the vape (more about the pods later). As the entire outer section is made of metal, the Sleek has a good, sturdy weight to it.

It is not overly heavy, but it does not feel like it would crack with a few unintentional drops or falls. The same cannot be said of the paint, as it seems like it could easily scratch or chip if the unit did fall. The hard metal surface is also prone to be covered in fingerprint smudges so it needs a wipe-down often if that sort of thing bothers you.

The Sleek kit has everything a user needs to start vaping. The entire model is very self-explanatory and with a buttonless design, there is not a lot of instructions to take in or master. Users will find the following in the Vaptio Sleek kit: 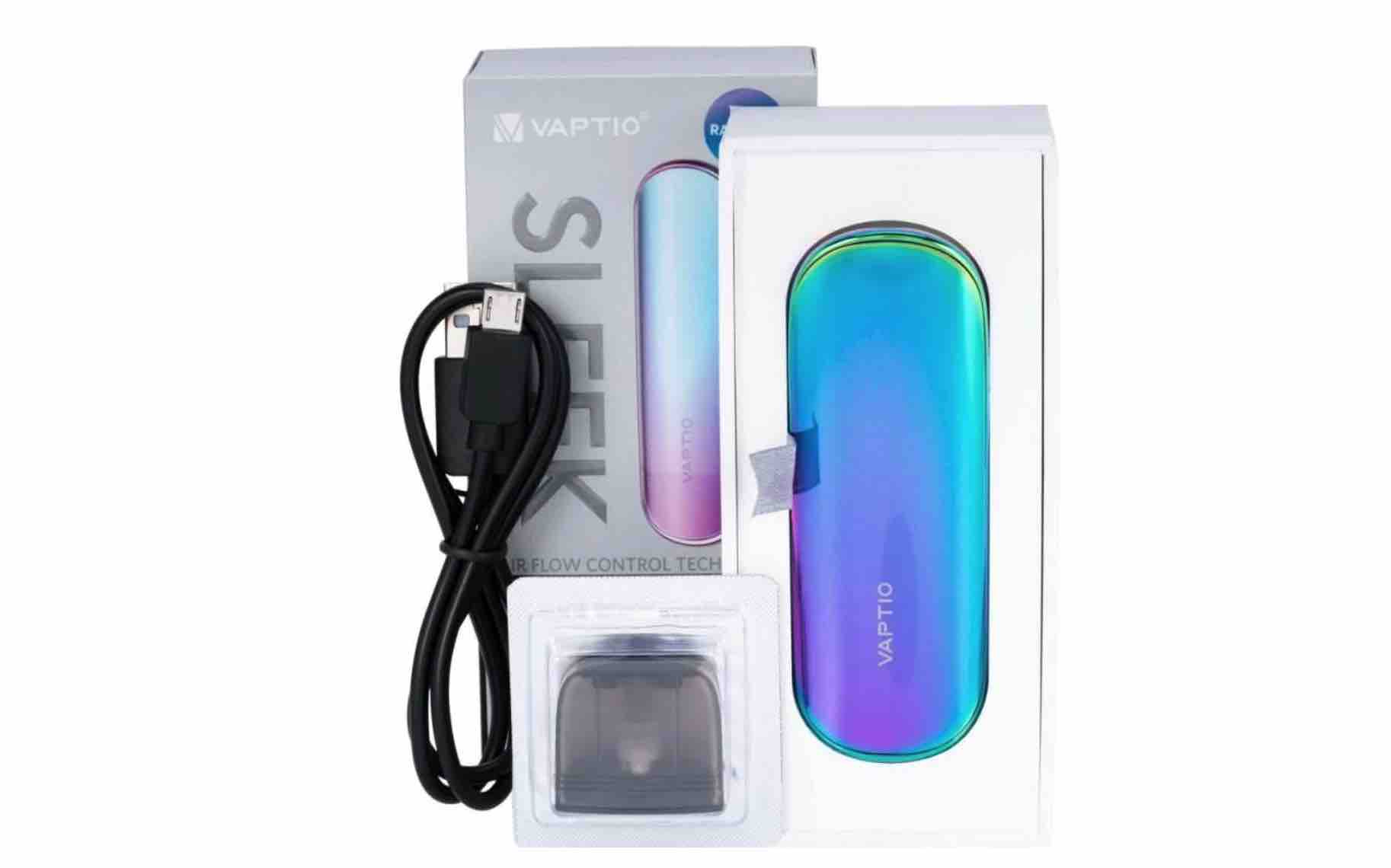 How the Device Looks and Feels

The Sleek features a smooth, hard-metal surface that strikes the right balance between lightweight and durable. It is not as lightweight as plastic but it feels strong enough to stand up to daily wear and tear. The device comes in several colors (four, to be exact), while the back panels have seven different options, all of them, animal-inspired.

There is a small viewing window that does not allow a whole lot of viewing because of its dark shading. The back panel is also a little wobbly, as only two magnets hold the all zinc-alloy plate in place, which may be too much for its capacity. The pods themselves have a unique design as well, but we will get into more detail later.

The Sleek uses a 400mAh internal battery, which is average for this style of the device. The battery uses direct-voltage output so there are no variable settings or different power levels available. The most the cell can output on a full charge is 13W, which, when paired with the 0.8ohm coil in the vape, can make for a satisfying mix of direct-lung and mouth-to-lung vaping.

The battery life depends on usage. Users can modify the amount of vapor they draw based on the length of their inhale — the longer the inhale, the more vapor produced. But longer inhales also drain the battery much faster, so if you take light draws the battery could be good for a full day or maybe less. The charging rate of the cell is 0.5A so it can get back up and running within an hour.

Vaptio claims that the internal sensor in the Sleek can adjust its output based on the length of the draw, although that also seems self-explanatory, as that is the norm for all air-activated devices. Vaptio also claims that the ramp-up time is reduced down to only a few seconds, which seems accurate. 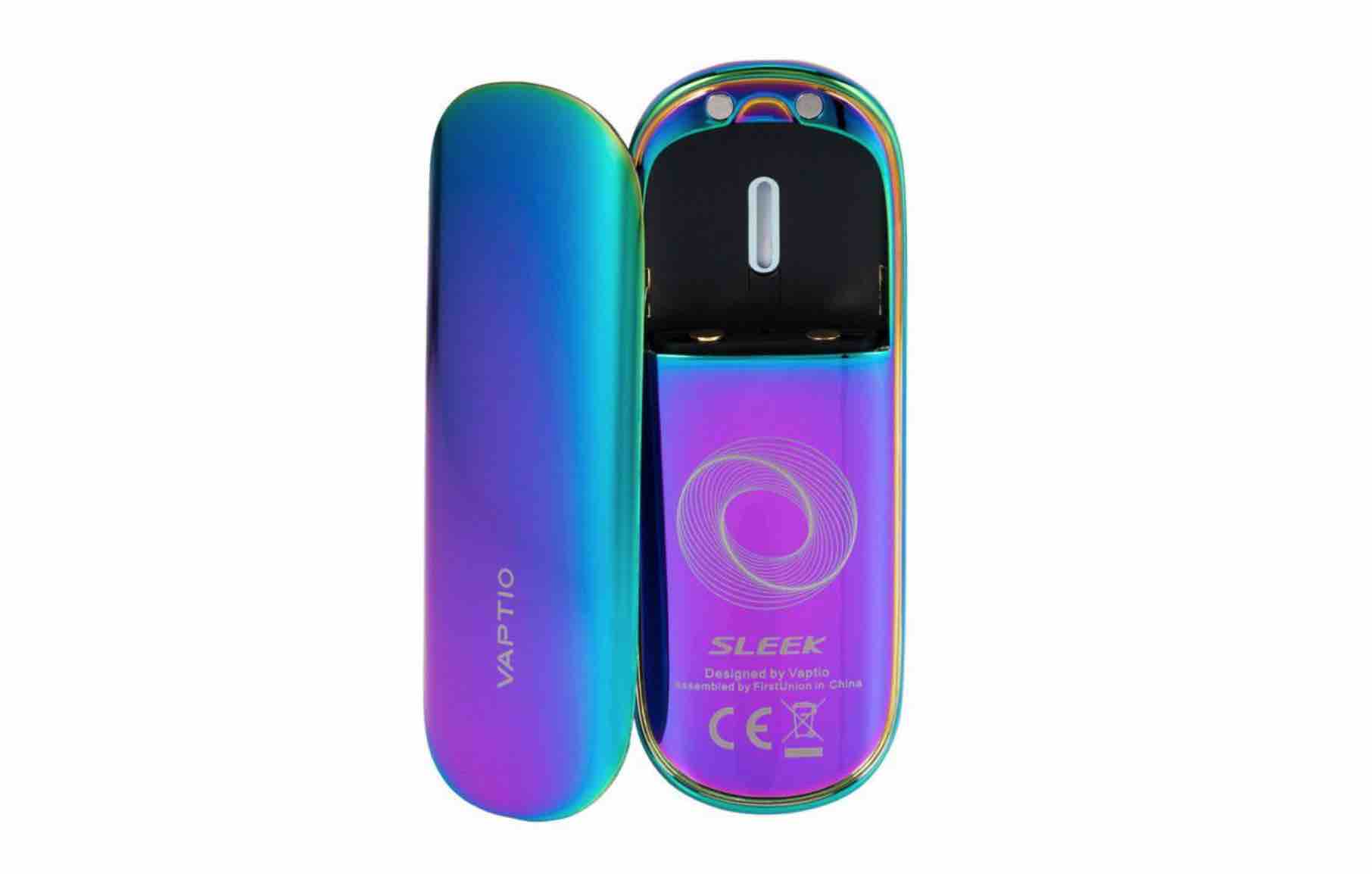 The time between inhaling on the mouthpiece and inhaling vapor is negligible, and the vapor is produced very quickly. The vapor quality is also on par with the device’s capabilities and gives off a good draw every time.

The flavor quality is excellent. The ceramic coils seem to absorb every trace of flavor in an e-liquid, no matter if it’s an even 50/50 PG/VG juice or a high-VG one for more nicotine absorption. The draw resistance is minimal and there does not seem to be any way to control the airflow other than taking short or long draws.

The Vaptio Sleek pods do feature a few innovative touches like its fill method. The vape has a little door atop its plastic frame that opens to allow for many different types of fill methods, but the thinner, narrower one like a unicorn or syringe would be best. The pod (there is only one in the kit, but a spare pod would have been nice), has two gold battery contacts that make a connection with the battery below. 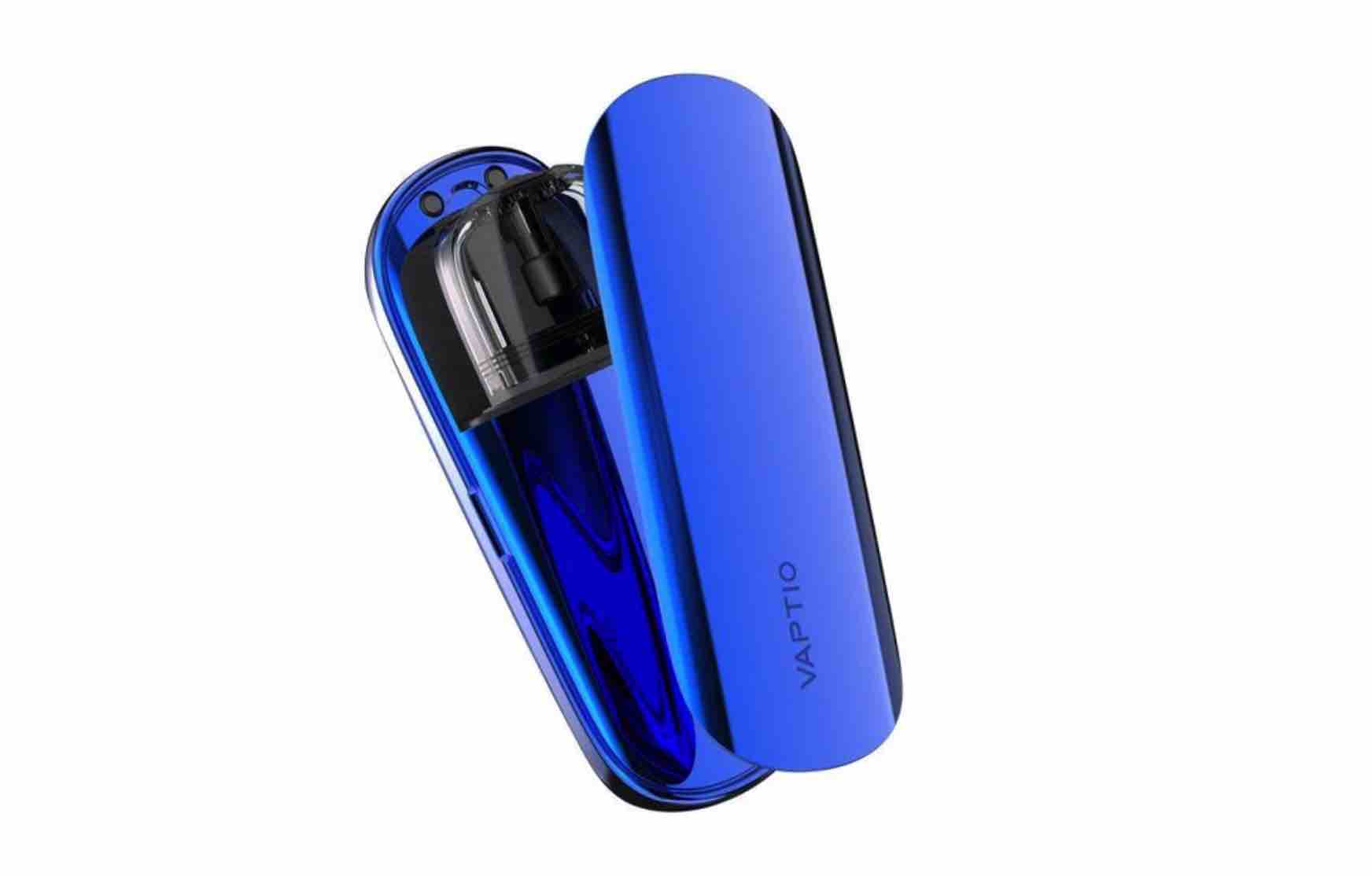 Users need to install the device atop the battery and push into the device until it snaps in place. Placing the pod the right way is also important as it fits only one way, but it can still be installed the wrong way, which is something Vaptio should have taken care of at the quality control stage. To install the pod correctly, make sure the tab faces inward, into the device, instead of pointing out the other way.

The Rubi is a pod device that supports both thick and thin oils, as well as e-liquids. The device features a 1ml pod and a small 250mAh internal battery. The device stands at only four inches tall and uses air-activation as it has a buttonless design.

The pods inside also use ceramic core technology and favor both nicotine salt and freebase nicotine e-liquids. The Rubi uses a special USB charging cable for its internal battery and it can be fully recharged in under an hour.

The EPuffer XPOD is a pod-style vaping device that features both refillable pods and pre-filled options that come in a variety of flavors and nicotine strengths. The XPOD consists of a small 375mAh internal battery inside of a slim, portable exterior that has a dimpled surface for a comfortable grip. 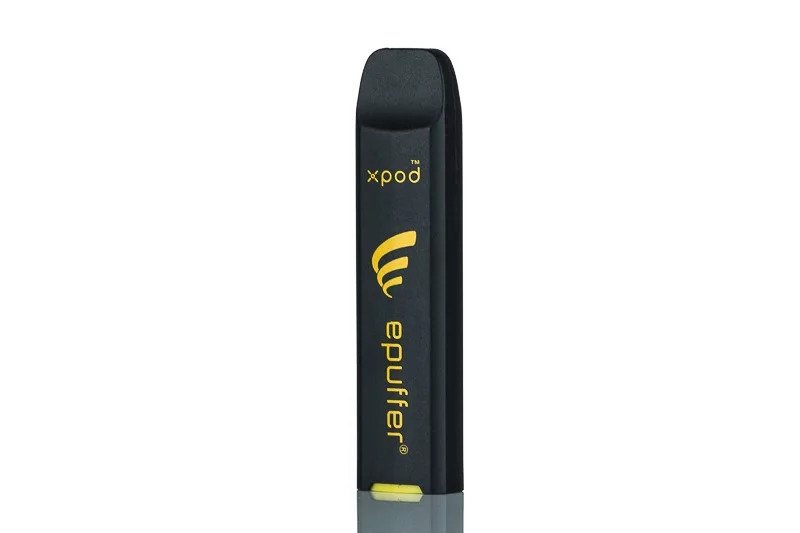 The pods for the XPOD are installed into the top of the device, and as the XPOD has no buttons users need to only inhale from the mouthpiece to activate the battery.

The Vaptio Sleek has an accurate name, as its exterior appearance is stylistically on point. It has a shiny, slightly curved shape that makes it easy to take anywhere or hide anywhere if need be. The device stands at much less than 90mm, so it is super-portable. There are a few minor complaints. The back panel does not attach as securely as it could with another mechanism or more magnets.

The pod’s filling method is a little tricky with other types of fill tips, but it remains leak-free, even though it might be hard to fill it with larger nozzle tips. The vapor quality is another positive about the Sleek.

The fourth-generation ceramic core gives off good flavor, while the ramp-up time is negligible as it fires instantly with every inhale. The battery life is good for a device like this, but it might need charging by day’s end if you use it all day. It also charges super-fast thanks to the 0.5A charging installed on the battery.

2 comments on “Vaptio Sleek Review: It’s All in the Name”