The Vaporesso XROS is an open pod system that houses an internal 800mAh battery inside its stainless steel exterior. The vape uses a 2ml capacity e-juice pod that is press-fitted into the top of the device and kept in place with magnets. The Vaporesso vape has a dual operating function, meaning users can engage the air-activation function or press the firing button to inhale the vapor. The XROS can output up to 16W of direct voltage power, and it also uses Type-C charging to recharge the battery. The XROS vape also comes outfitted with an adjustable airflow control switch on the opposite side of the power button. The airflow switch allows users to increase or decrease the amount of airflow that goes into the pod section. The Vaporesso kit comes with two different pod styles that use either 0.8ohm or 1.2ohm mesh coils.

A Closer Look at the Vaporesso XROS

The Vaporesso XROS is a sturdy-looking vape that features a single operating button on its front and a single LED indicator above it. The XROS vape measures over 110mm in height, so it is a little long, but its slim profile makes up for it. The device has a Type-C charging port on its bottom that lets users recharge the internal 800mAh battery.

The exterior of the XROS kit has a stainless steel exterior, which is unique for a pod. It is a sure sign that the Vaporesso XROS vape will last for a while, especially heavy use. It might be the very last pod device that you buy. The steel feels sturdy in hand, and it does have a little heft to it, but nothing so noticeable or bothersome. 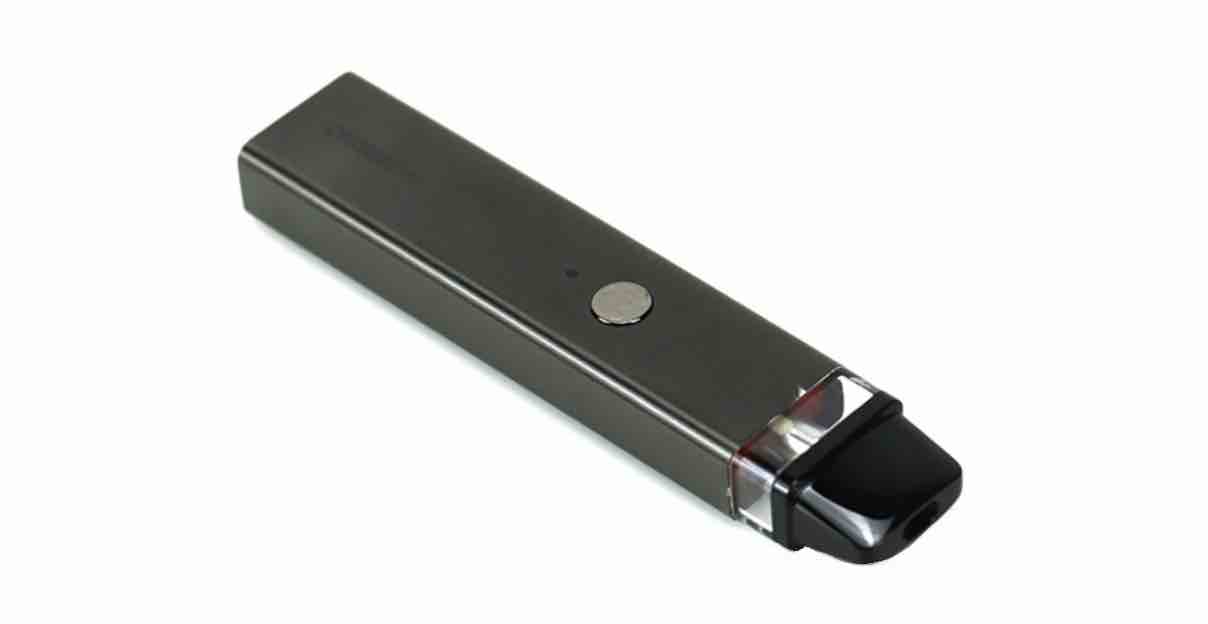 The Vaporesso vape has a boxy shape with straight edges, but that design only adds to the overall quality of the Vaporesso XROS. Another unique feature of the XROS is that the accompanying pod does not disappear completely into the battery section. Instead, it remains above the top lip so users can see into the transparent pod to check their e-juice levels.

The Vaporesso XROS also has an adjustable airflow control switch on the back. The controller moves from left to right to decide the airflow into the Vaporesso XROS, depending on what kind of draws they prefer. The button is easily accessible and moves smoothly across the chamber, so users do not even have to look at it and move with the same hand.

The Vaporesso XROS kit comes with a lot of different accessories. Included in the case is the unit itself, along with two pods and a charging cable. 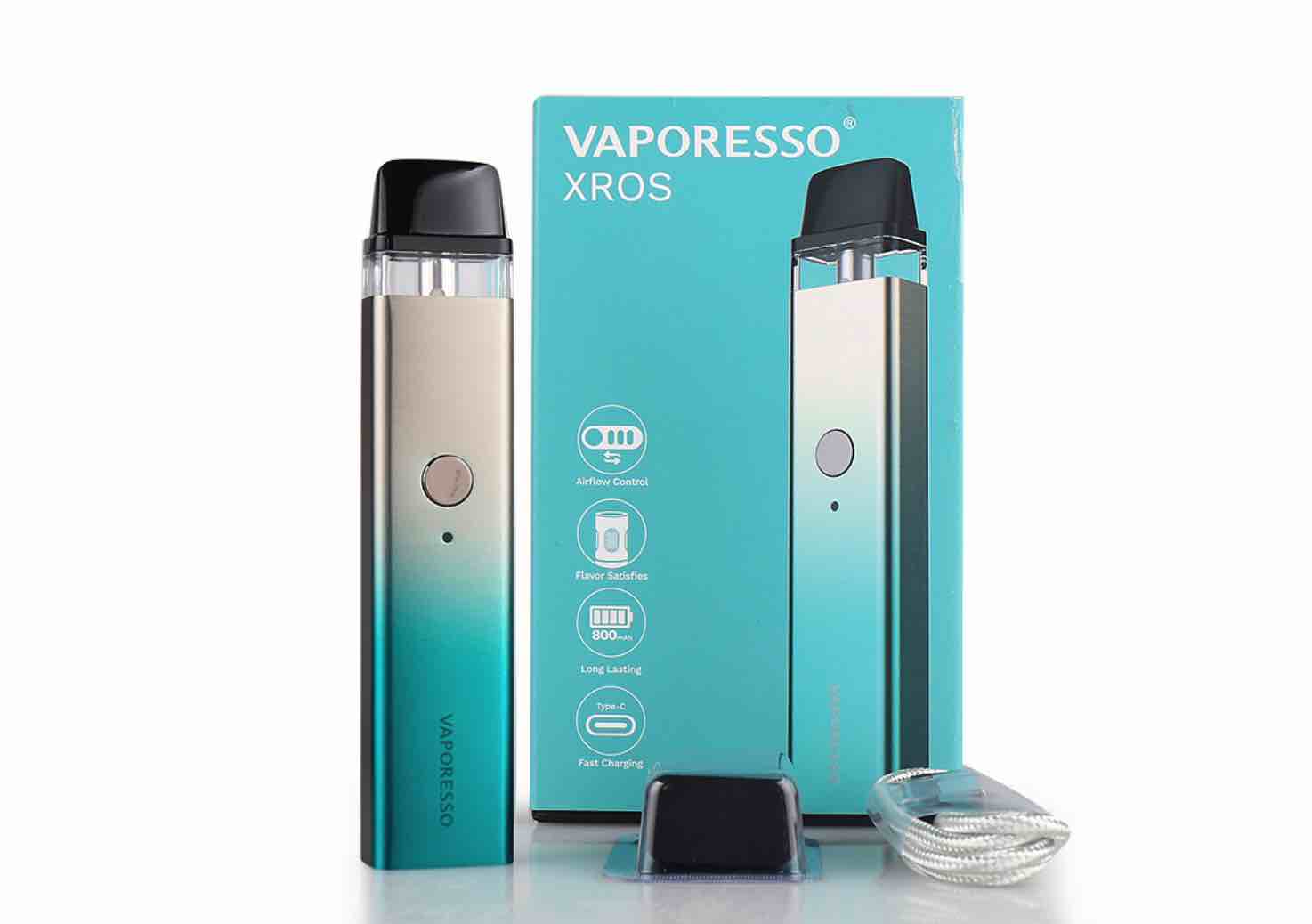 The Vaporesso XROS vape looks very similar to many open pod system kits out there, but what sets it apart is the build material. It is rare to find stainless steel on a pod device, which is usually delicate little things that are either zinc or aluminum or, in the worst case, plastic. But the XROS goes a long way in proving that it is above the rest in terms of build quality. 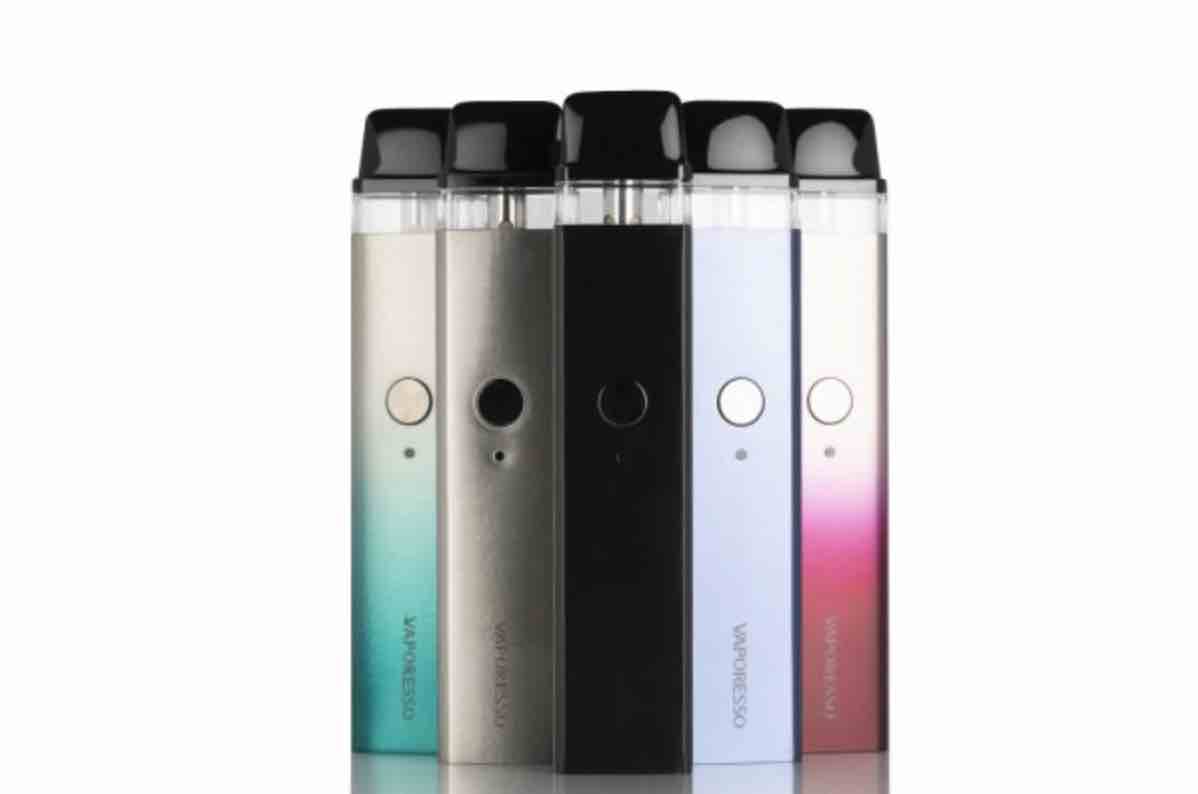 The rest of the vape is plain but impressive. The firing button, which is optional as users can choose a buttonless operation, also feels well made and works well with the device’s overall performance. The XROS is also lightweight and can fit easily into a pocket and a closed fist. The unit comes in several different color options as well, all of which are particularly stunning.

How to Get Started

The XROS vape comes with an internal 800mAh battery that can last for an entire day, depending on usage. Users should first check the battery status as indicated by the LED above the firing button, with green showing the vape is at full power. 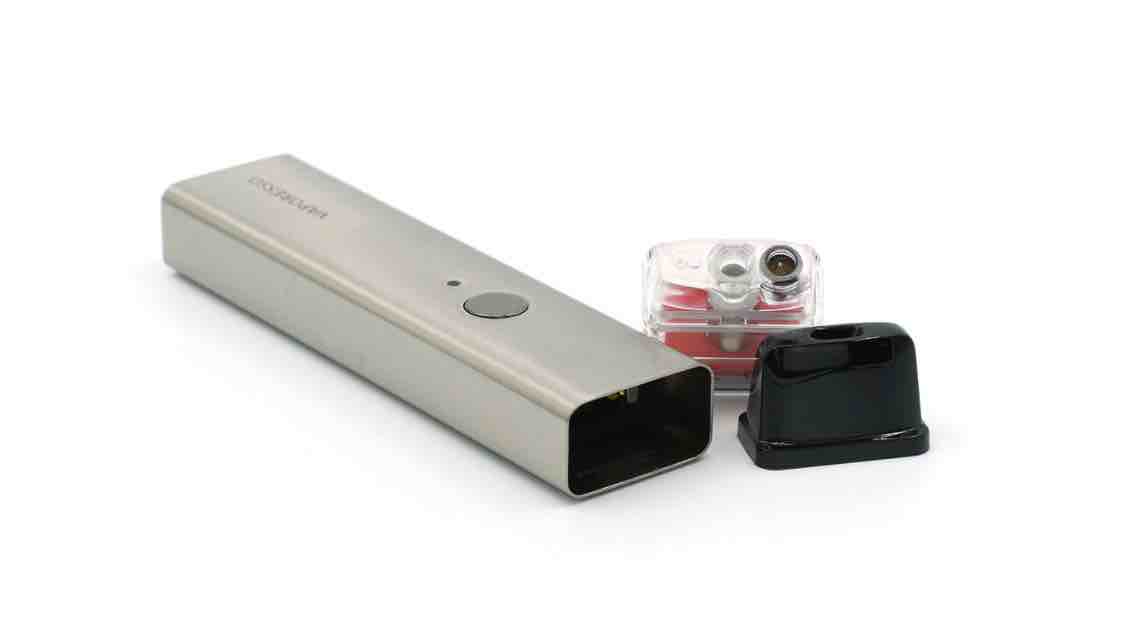 The vape features a single firing button that users can either use as a firing button or activate the air-activation option. The latter option seems like the most convenient, as users do not have to fiddle with the button and the vapor quality appears to be better with the inhale-only option. The button takes three clicks to get started.

The Vaporesso XROS has a good battery life compared to similar devices. Its internal battery can output at a maximum of 16W, suitable for the mesh coils’ resistance inside the pod. There are no variable voltage settings on the vape, so it works on a direct voltage output. The battery also has a reasonable recharge time, as it utilizes 1A charging.

According to the user manual, the battery can recharge in under an hour, around 45 minutes. Battery life also depends on usage and the length of your draw, as longer draws can take a little more out of the battery than short puffs at irregular intervals.

The device’s internal battery is good for at least a day, while the individual pods can vary in lifespan. The 1.2ohm pod is more suitable for even 50/50 VG/PG nicotine options, while the other pods can handle regular nicotine e-juices at various VG/PG levels. The pod has a very straightforward fill design.

Users need only to remove the mouthpiece to access the wide fill ports up top, which are covered by tiny stoppers. The pod can hold up to 2ml of e-juice, and they hold them well. The pod showed no signs of leaking problems at the time they were being used. Users will notice several layers of red silicone on the bottom of the pods, which keeps the pod from leaking. 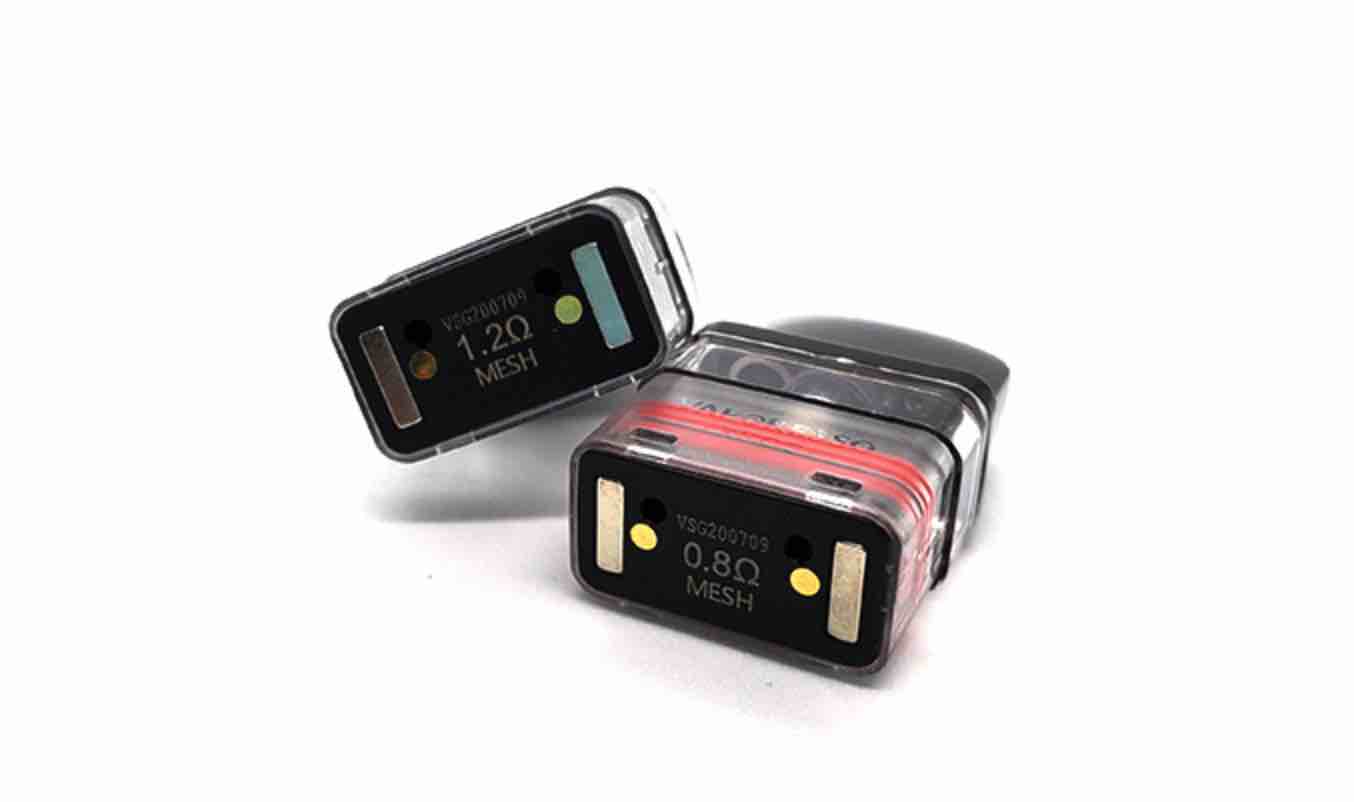 There are two pods included in the kit, but both come outfitted with mesh coils and cotton wicks. The 1.2ohm pod is the best option for mouth-to-lung vaping, along with the airflow switch set to its lowest setting, which can offer great throat hits. The 0.8ohm pod is more suited to direct-lung vaping and is best used when the airflow setting is at its most open setting.

The Uwell Caliburn is an open pod system kit that uses an internal 520mAH battery and a 2ml refillable pod that uses both buttons or draw activation. The Caliburn vape uses 1.4ohm mesh coils pods perfect for mouth-to-lung vaping and can support many different types of e-juice, from nicotine salts to regular nicotine.

The Caliburn vape has a slim build made from aluminum alloy. It measures a little less than the XROS, but not by much as it stands at only 110mm. The Caliburn vape also has two airflow slots on either side of the pod bay that users can cover up or not, given their preference. The vape also takes USB charging, but not USB-C charging like the XROS.

The SMOK NFix is another open system pod kit with an internal 700mAh battery and can fire as high as 25W. The SMOK pod has a 2.3ml nicotine or non-nicotine e-juice capacity along with an internal coils` resistance of 0.8ohms. 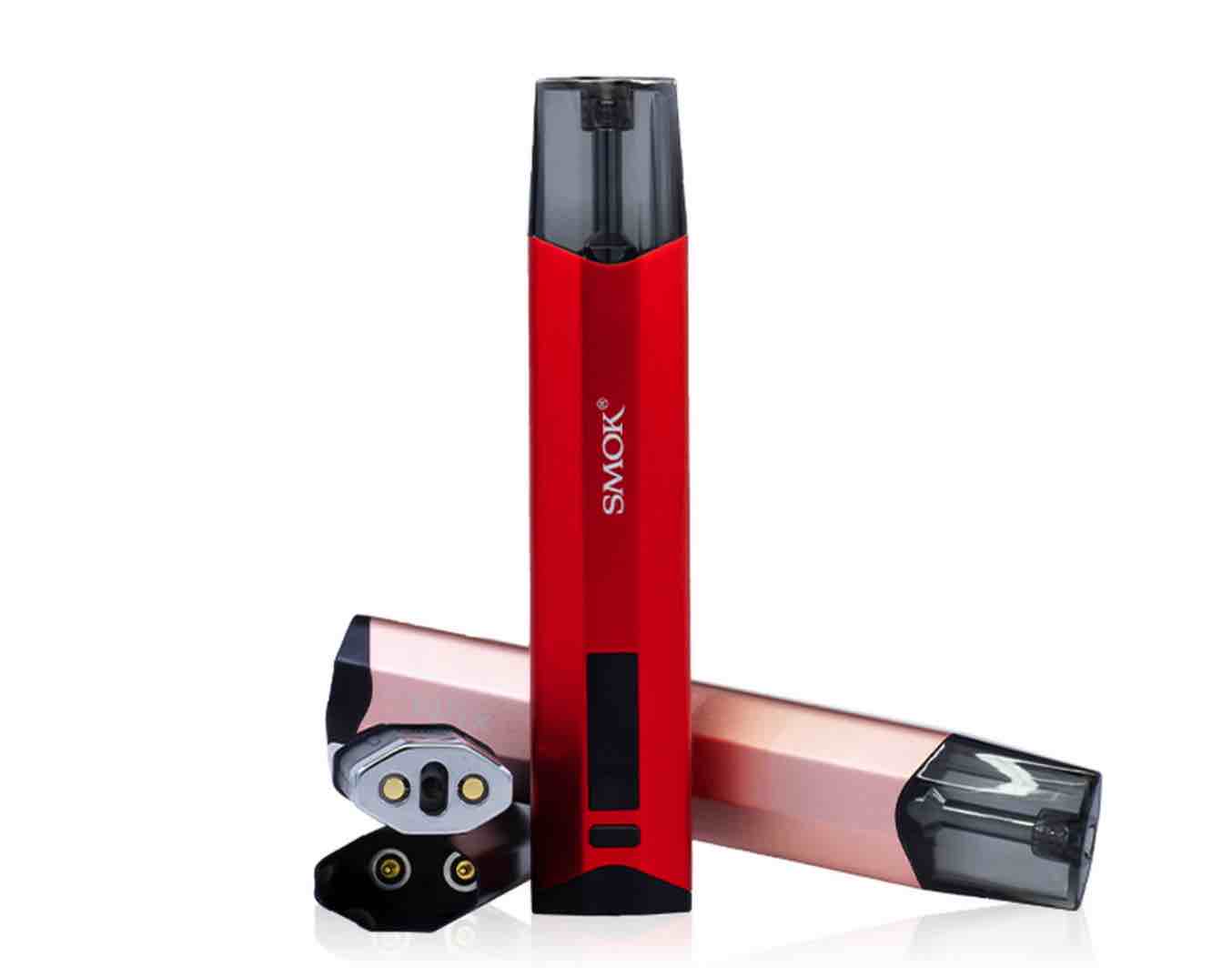 The SMOK NFix kit also features an 0.69” OLED for users to adjust the settings on the vape, which is rare for a pod device. It features a durable zinc-alloy exterior and features a lightweight build, even though it measures the same size as both the XROS and Caliburn kits. The SMOK NFix vape also has a single button but only features button-activated functioning to conserve battery power.

Do you enjoy using pod devices? Which is your favorite type of pod system? Let us know in the comments section below.

The Vaporesso XROS is a unique, new pod system with a sturdy build, outstanding performance, and versatile airflow options. It features some never-before-seen features like a stainless steel build and an adjustable airflow switch with three different settings. The Vaporesso XROS kit also has remarkable build quality, and not only in the vape itself but the pods.

The pods are outfitted with several silicone layers at the bottom of the pods, making them leak-proof, which is an incredible innovation on the part of Vaporesso. The device’s battery life is also stellar, and the fact that it charges in under one hour is exceptional. The flavor and vapor quality were also good, but a lot depends on what type of e-juice you are using. Even still, as the vape comes with two different pods with two additional resistances, it should not be a problem.