The Uwell Caliburn Koko vape is a pared-down version of the Caliburn pod mod system. The device is square-shaped and has a tiny, lightweight frame. The build features aluminum alloy and plastic with no buttons anywhere on the pod mod.

The Koko vape uses a 2ml juice pod that plugs into the top section and is draw-activated. The internal battery has a 520mAh capacity and uses USB charging with a port on the base of the unit. There is a small, pinhole LED indicator light on the side to show battery life. The pods use a 1.2ohm, round-wire coil, which offers a loose, mouth-to-lung draw. 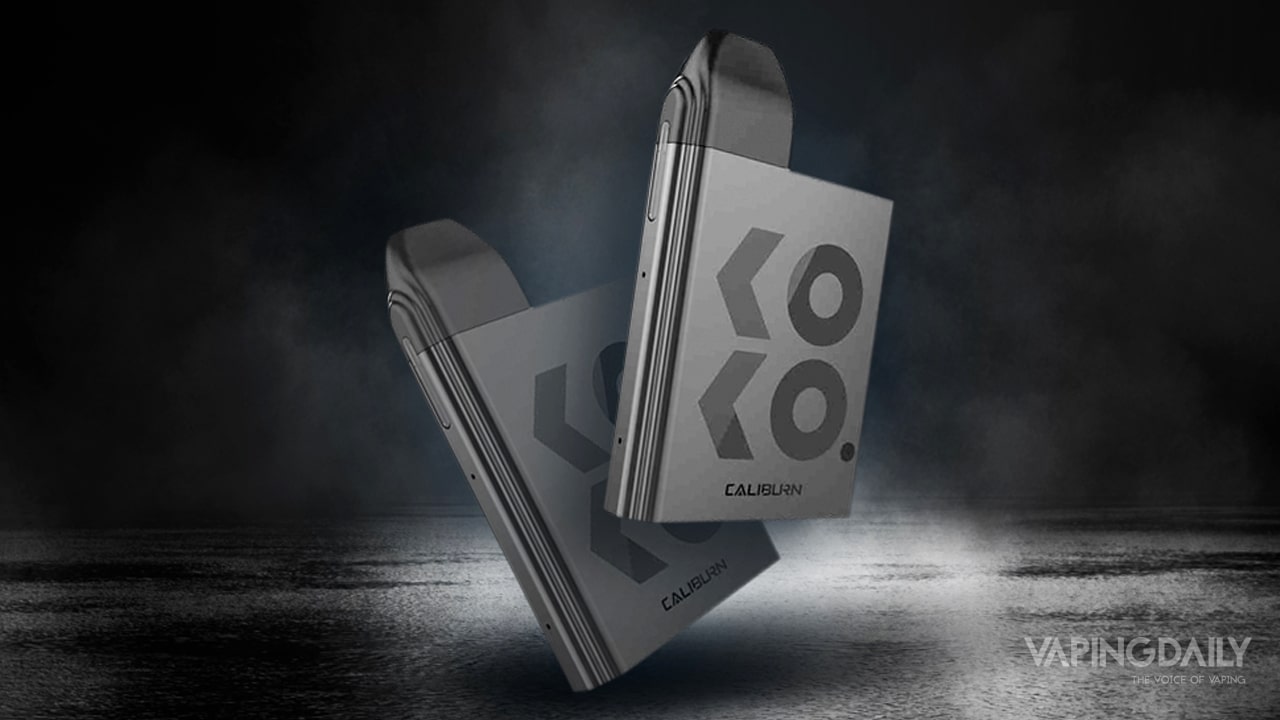 The Caliburn Koko pod mod is a smaller version of the original Uwell Caliburn that has a longer shape and stands at 110mm (4.3”). The Koko vape stands at 67mm (2.6”) and is 12mm (0.4”) wide, so it is very concealable and pocket-friendly. The outer chassis features lightweight aluminum alloy with plastic elements, so the device is durable without being too heavy.

There is little branding, except for “Koko” imprinted on each side, but the font is well-designed and gives the entire unit a sleek, minimalist look. The pod bay sits atop the unit, and the mouthpiece juts out when it is in place, which is the only part of the Koko that sticks out.

Along the top side, there is a thin opening that lets users see the juice level of the pod inside the unit. There are two holes on the side of the unit. One is for airflow. The other one, which is further down, is a small, pinhole opening on the side of the device that hides an LED.

The LED is the battery life indicator and flashes three colors to show three different power levels. The three colors are:

At the bottom of the unit, users will find the USB charging port. The kit includes a USB cord for quick charging. Beside the port are three air ventilation holes. Back at the top, the unit features an opening for users to attach the lanyard included in the kit.

The Uwell Caliburn Koko starter kit comes in an elegant, pull-out cardboard box. The device sits on the top section, with the other parts of the kit underneath. The Koko is on full display with a pod already installed. 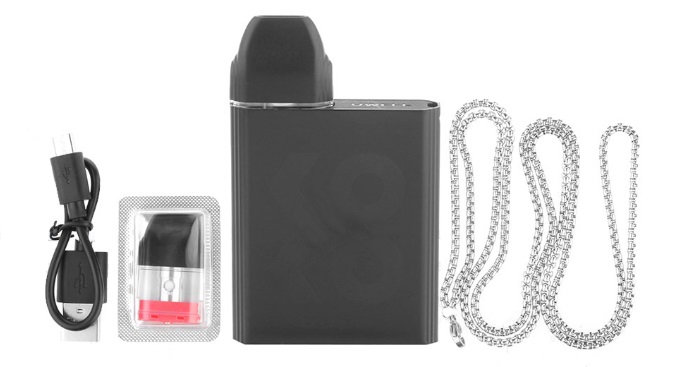 Here is everything else that comes in the Caliburn Koko kit:

The Caliburn Koko has a very straightforward design. The pod mod is entirely buttonless, unlike the original Uwell Caliburn that gave users the options of toggling between manual and automatic draw. With the Koko, users need only fill the pod, install it, and start inhaling. The pods have an integrated mouthpiece, so the drip tip attaches to the rest of the pod.

How Long the Battery Lasts

The Koko has an internal 520mAh battery, which is the same capacity as the first Caliburn cell. The Koko can output a maximum of 11W, while the voltage range goes from 3.2 – 4.0V.

The duration of the battery depends on how often and how long a user vapes, but a fully charged cell can last for about ten hours of moderate use or around five hours with constant, heavy use.

The Koko pods can hold 2ml of nicotine salt e juice inside their plastic frames. The pods are top-fill, so users must remove the black, plastic mouthpiece to access the two fill holes (one on either side of the coil). The Koko kit comes with two pods: 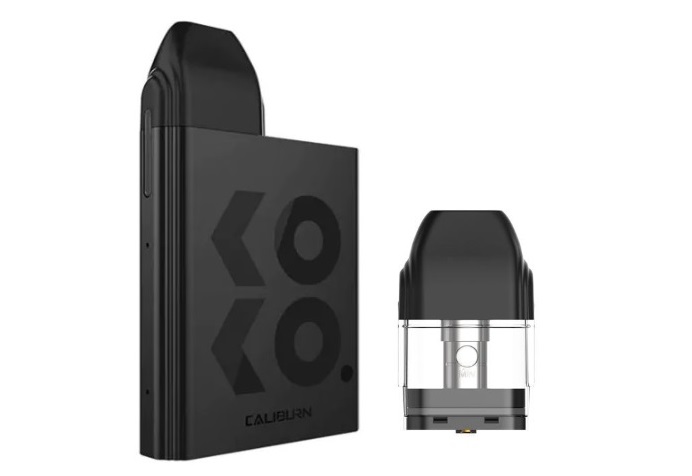 The pods have gold-plated contacts on the base, as well as two magnets to secure a connection with the battery section. The drip tip comes off, which is how users fill the pods with e juice. There is a barely visible fill-line marker on the outside of the pod to help guide users, although it is hard to see.

The fill line, however, makes little difference. Users can fill the pod entirely without it disrupting the performance or vapor quality. The coils inside the pods are not replaceable, and they cannot be exchanged.

How to Turn On the Caliburn Koko

The Caliburn Koko vape features a simple, buttonless design. Unlike the other model of Caliburn, which had a power button to switch between manual and automatic modes, the Koko opts for an air-activated battery that has no on/off switch. The pods are draw-activated, so users need only take a hit to create vapor.

After charging the battery to full, users have to remove the plastic drip tip to reveal the two fill holes, which measure about 3.5mm (0.13”) each.

Users can fill each e-juice hole with a standard bottle tip, as they are quite significant. With the pods full, users need to replace the drip tip and then insert the pod into the bay. After completing these simple steps, the Koko is ready to go! Users need only start vaping at that point.

The Caliburn Koko is styled as a dedicated mouth-to-lung device, and the coil rating of each pod supports that purpose. The Caliburn uses side and bottom airflow to achieve this end, as air comes in from the side and bottom for a very loose draw. The consistent power output of the battery ensures quality vapor production with every pull.

The coil type also makes the pods compatible with different kinds of e-juice (freebase nicotine, nicotine salt) so users can use as many e-juices as they want with various nicotine levels. The vapor quality does diminish a little as the battery power weakens, with cloud size becoming less when the battery is at half strength.

The flavor quality stands up, though, even when at the lowest power levels. There is no information on what material the wire or wick is, but regardless, the coils do a great job of producing quality vapor.

The original Uwell Caliburnis a slender, elongated device that stands at 110mm (4.3”) and has a single power/firing button on its aluminum alloy frame. The first version of the Caliburn also has a 520mAh battery with a top-loading pod. The pods also have a 2ml e-juice capacity and have the same coil types (the pods for the Caliburn also work for the Koko).

The main difference between the two devices, besides their physical differences, is the main button on the original Caliburn. That button lets users choose between an automatic, air-activated style or a manual, press-to-vape function that allows users to control their vape by applying more power to their coils.

The SMOK Nord has an internal 1100mAh battery and uses replaceable pods that have the same capacity as the Koko pods, 2ml. The SMOK Nord also comes with two pods, but the coils are rated differently than the Koko. While the Caliburn Koko has two MTL pods, the SMOK Nord offers users a dedicated 1.4ohm pod for MTL vaping and a 0.6ohm pod with a mesh coil for direct-lung vaping.

The Nord also features a power/firing button on its frame, which stands at 94mm (3.7”), so it is a bit shorter than the Caliburn, but not as small as the Koko. Users can remove the coils from within the Nord pods, something they cannot do with either Caliburn pod.

The MOK Mico stands at 56mm (2.2”), which is a little shorter than the Caliburn Koko’s height of 67mm. The Mico is also a pod device, but the cartridges can only hold 1.7ml of e juice, which is down from the Caliburn Koko’s 2ml. The Mico uses two pod types, however. Users can opt for a regular, MTL pod with a coil rated at 1.0ohms, or they can switch to a mesh-style coil that has a coil rated at 0.8ohms.

The pods use side-fill ports with rubber stoppers to prevent leaking, and they also have magnetic connections like the Koko pods. The Mico battery also has a higher capacity as it can hold 700mAh of power and output up to 26W on a full charge, which is much higher than the Koko’s 11W output and its 520mAh capacity.

The Caliburn Koko is a pod system with a lot of kicks. Even though its maximum power output is only 11W, the coils in the pod produce excellent vapor. With the many airflow slots on the side and bottom of the unit, the draw is loose, giving vapers that mouth-to-lung experience they expect from a device like this.

Is Caliburn Koko good? Definitely. The Koko is ultra-portable. Its aluminum alloy frame and small size allow it to disappear into any pocket or bag for convenient, on-the-go vaping. The Koko only has a 520mAh battery, so heavy users might have to recharge it by midday. Moderate use might yield a full day’s worth of vaping, though, but the quick charge time makes up for any lost vaping time.

The Koko could have had a higher battery capacity without compromising on its weight (it weighs in at 33g or barely one ounce). But, as it stands, the Koko is an excellent system for mouth-to-lung vapers who want a quick hit, once-in-a-while, of quality vapor.