The Asvape Hita: Portable and Affordable

The Asvape Hita is a portable pod kit created by Asvape. It is a mech mod style vape powered by a 1000mah fast-charging battery with a fire button and a pod with 3 ml capacity. The juice capacity is smaller, depending on which country in which it is sold.

The pods are refillable, and the coils are replaceable. Two coils come with the Hita starter kit. Additionally, there is an optional RBA deck available, but it does not come with the kit.

The Asvape Hita is an ultra-portable pod style AIO designed to be portable. It is tube-shaped and not very large, even though it is larger than the Juul and Uwell mods. Still, it is not that much bigger, and its advantage over those mods is that its pods are refillable. Adding to its portability is a lanyard that comes with the kit. With the lanyard, the user can prevent the mod from getting lost.

Another reason to choose this mod is that it has decent power output, allowing the user to vape between 5 and 30W. There is no screen on the mod, but the functions are so simple that one is not needed. Finally, the battery is built into the mod, and it charges quickly. 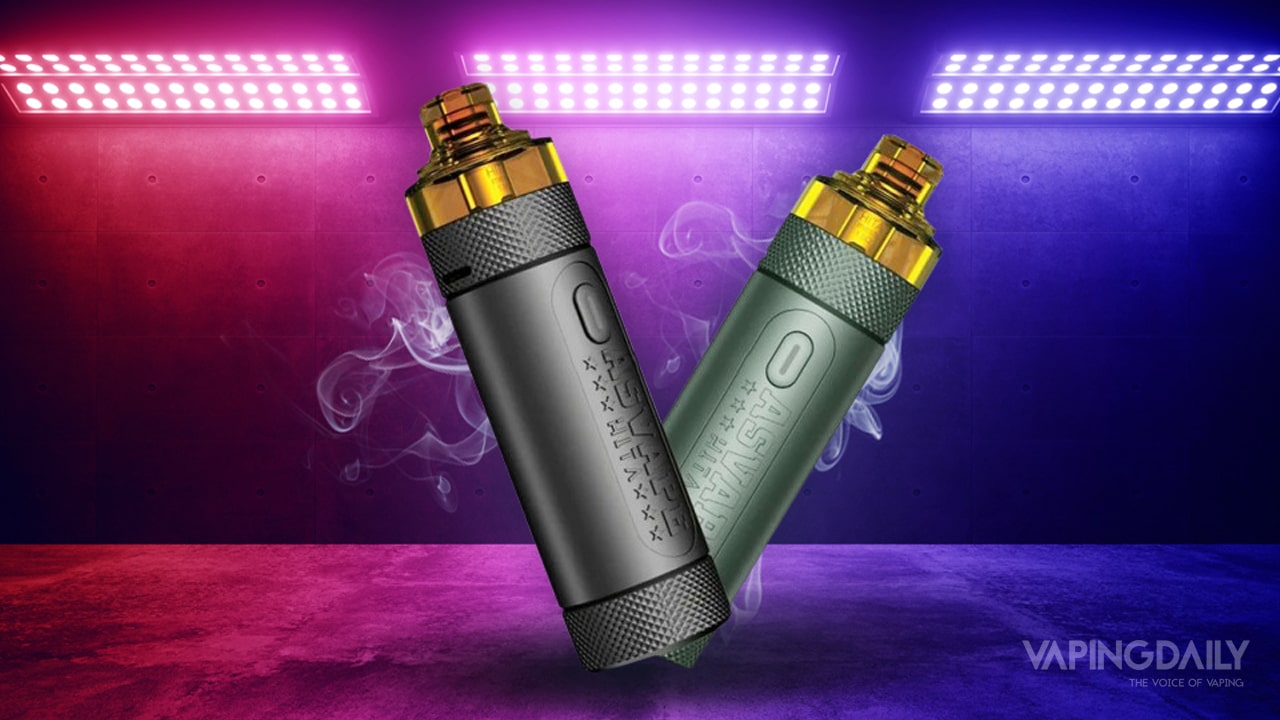 The refillable pod in the Hita starter kit is especially well made. It has adjustable airflow, allowing for tight or open drags. There is no need to be concerned about the pods sliding off the mod. They are held firmly in place, and the fit is tight and secure. Additionally, the cartridges are easy to use and refill. Two coil options allow the user to go from mouth-to-lung to direct-to-lung without any hassle. They can handle high nicotine salt juices with ease, but also work well on low or zero nicotine liquids.

The Asvape Hita mech style mod is pretty cool in the appearance department as well. The tube shape is a refreshing contrast to the tons of box mods out there. The colors available are dark green and carbon black. The choice of colors is limited, and it would be nice if Asvape would make it in more colors. But these colors make this vape suitable for someone who wants something inconspicuous.

The Asvape Hita starter kit comes with the Hita battery, pod, and two coils. Two imported accessories in the kit are a type-C cable and lanyard. Also included are a QC card, warranty card, and a user manual. 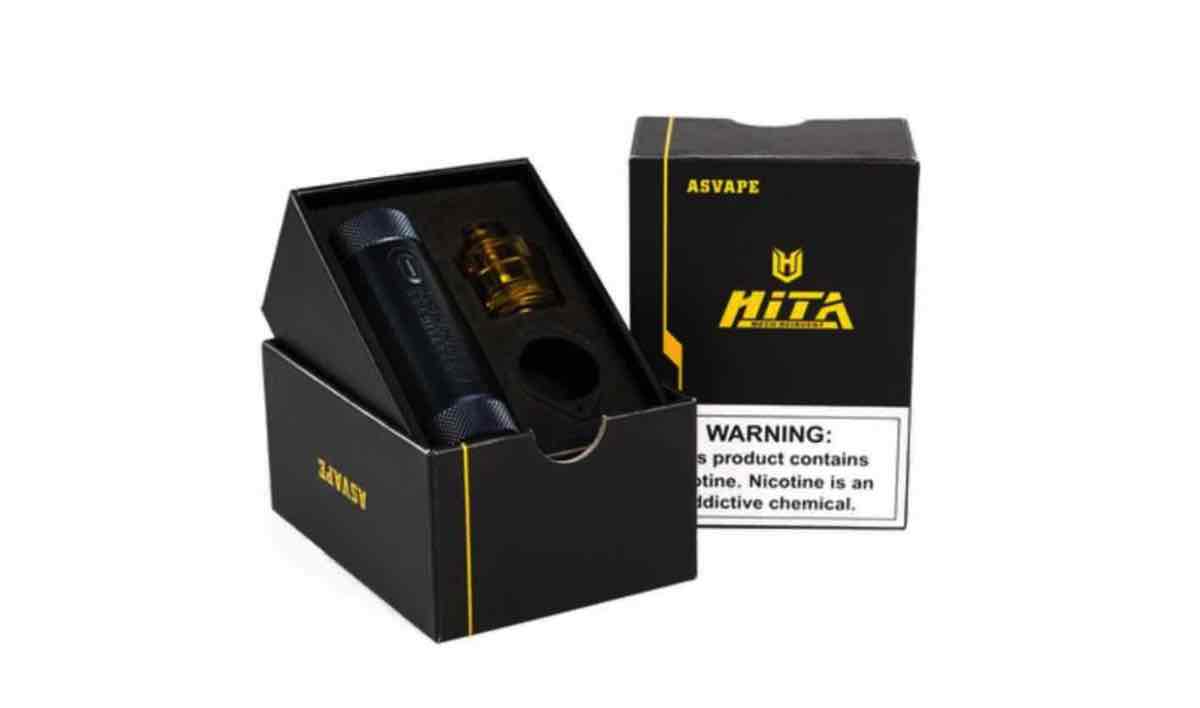 Internal Build Quality and Design of the Asvape Hita

This vape is quite small, but it is slightly larger than most pod mods, measuring 92 x 25 mm. Also, it is as light as a feather, weighing around 70 grams with the coil and loaded pod. The vape is made out of anodized aluminum, so the user does not have to worry much about it getting damaged or getting chipped. The design is one of the simplest we have seen in a long time. There is no screen or firing button, only an LED light. The vape is available in black and green. 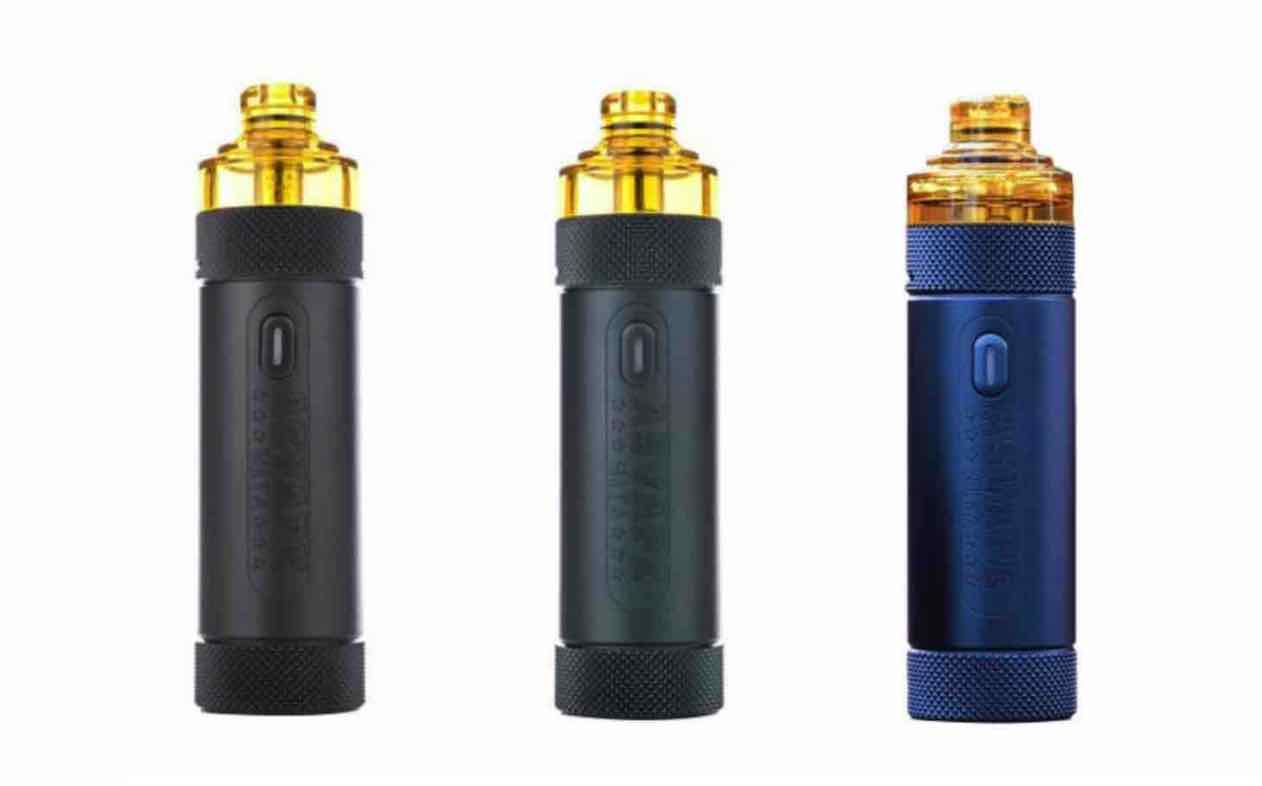 The Hita pod vape has an internal 1000mah battery with a charge rate of one amp. Charge time takes one hour, which is good because the battery will not last more than a day. Unfortunately, the Hita does not support pass-through charging. An LED light lets the user know the life of the battery:

Once the battery is in the red, the pod mod will not last much longer. Charge it immediately.

The Hita pods hold 2 to 3 ml of e-liquid, depending on the country in which it is bought. In countries where the Tobacco Products Directive applies, the cartridges only hold 2 ml. Airflow is adjusted by turning the pod while it is seated on the battery. The airflow adjustment has a very rough texture, so it is easy to grip. Another convenient feature is that the pod is clear enough to monitor the juice levels. Other useful features are a replaceable 510 drip tip and a rubber stopper plug on the side. 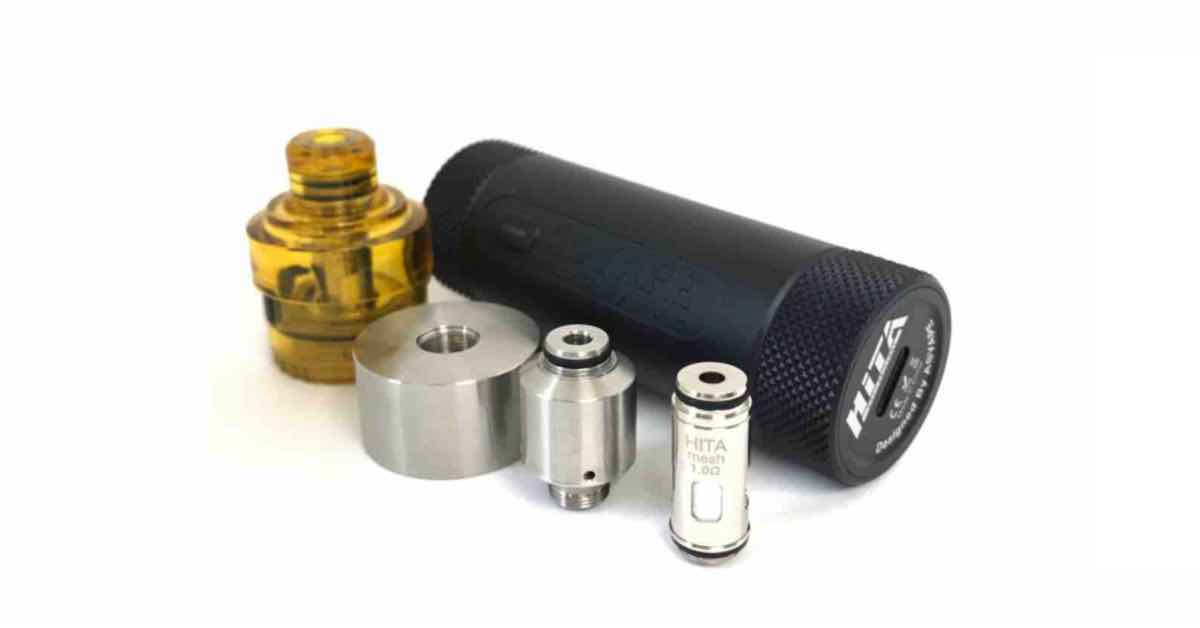 The Hita starter kit comes with pre-made 0.5 and 1.0-ohm mesh coils, and an RBA deck is available separately. If the tank is not satisfactory, it can be switched for another if it is 510 compatible.

The answer depends on the user. Vapers who hit their devices hard will have to change their coils frequently. It is better to use the vape a few times a day, which will extend the coil life by several days to a week or two. The 0.5-ohm mesh coils should be able to handle 30 to 35 ml of juice before the flavor quality starts to decline. The 1.0-ohm mesh coils can handle 20 to 25 ml of liquid before they need to be replaced.

How to Use the Asvape Hita 30w AIO Mech Mod

The pod mod turns on and off with five clicks of the firing button. There is no auto-draw option. Adjust the airflow by turning the pod. The pod needs to be removed to refill it. Strong magnets hold it to the mod, so be careful when pulling it out. Once the pod is out of the mod, pull out the stopper and refill it.

The coils are not easy to replace, but following these simple steps will make the process easier. First, empty the pod, and then unscrew the bottom cap to access the coil. Use a small screwdriver to push out the coil. Next, unscrew the base from the coil and then screw a new coil onto it. Finally, put the new coil into the pod, and then screw the bottom back on. These steps are not very difficult, but doing all of this on the go is not convenient. Be sure to find a place to sit and work before replacing the coils.

The Asvape Hita RBA has two slots in which the coil leads go. Loosen the screws, put in the leads, and then tighten them. Wrap the coils counterclockwise. Making them in this fashion makes the coils easier to install. When wicking, use less cotton than you would on other build decks because the juice holes are not very large.

The Hita starter kit comes with an Allen wrench, but it is not very stable. It tends to bend when used to loosen the screws. After placing an order for this starter kit, go to a hardware store and buy a set of Allen wrenches.

Performance and Vaping Experience with the Hita

The Asvape Hita performs very well. The 0.5-ohm coil gives off excellent flavor, and it is excellent for direct to lung vaping. The disadvantage of using this coil is that it takes a while to break in. After one day of use, though, the flavor gradually improves until it is fantastic. As for the 1.0-ohm MTL coil, it worked well from the moment it was plugged into the pod. 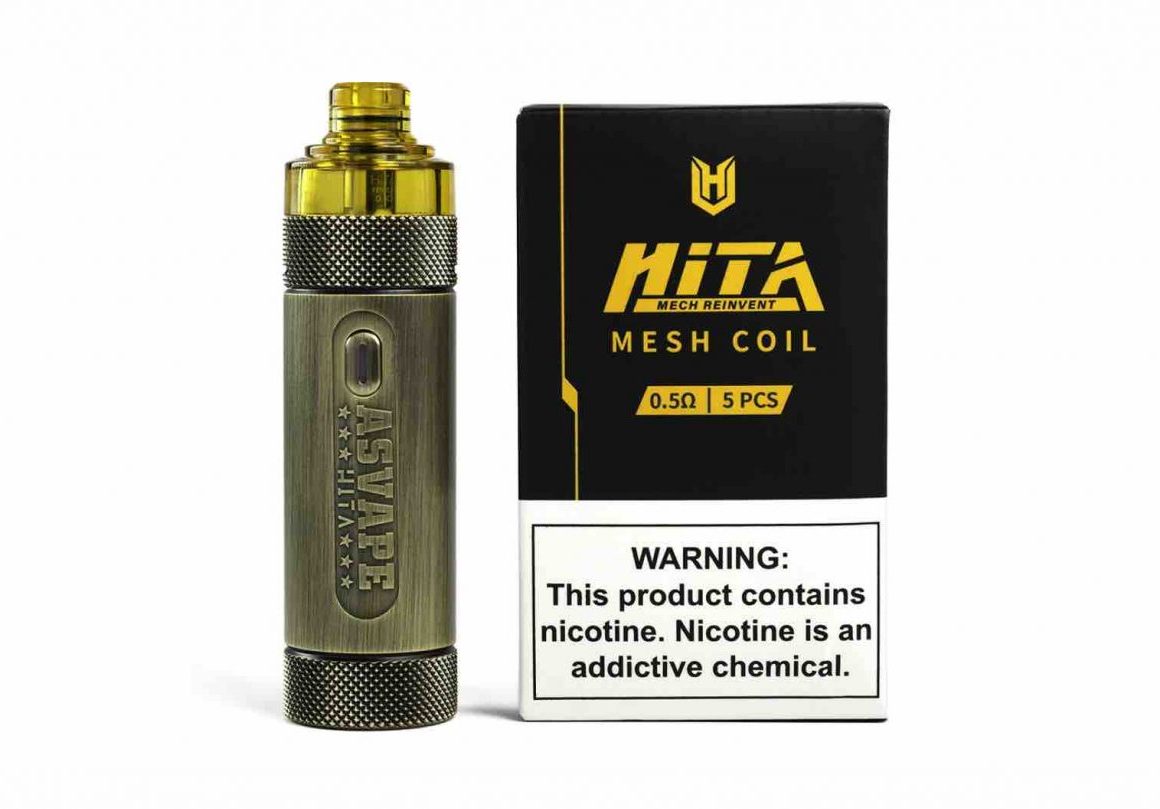 It can handle 20 a lot of juice before the flavor quality begins to deteriorate. Not only does it last longer, but using it dramatically extends the life of the mod. The RBA deck works well, too, and it has a tighter draw than the premade coils. If the airflow is turned down, it offers excellent MTL hits.

There were a few things that detract from the vaping experience. One, the 0.5-ohm coil takes too long to break in. It offers excellent flavor and vapor once it gets going, but it would be nice if it kicked in faster. Also, while the Hita coils are easy to get into the pod, they are not so easy to pull out. As for the RBA deck, getting the coils inside can be challenging because of its small size and delicate parts. Even experienced builders can have trouble with it. 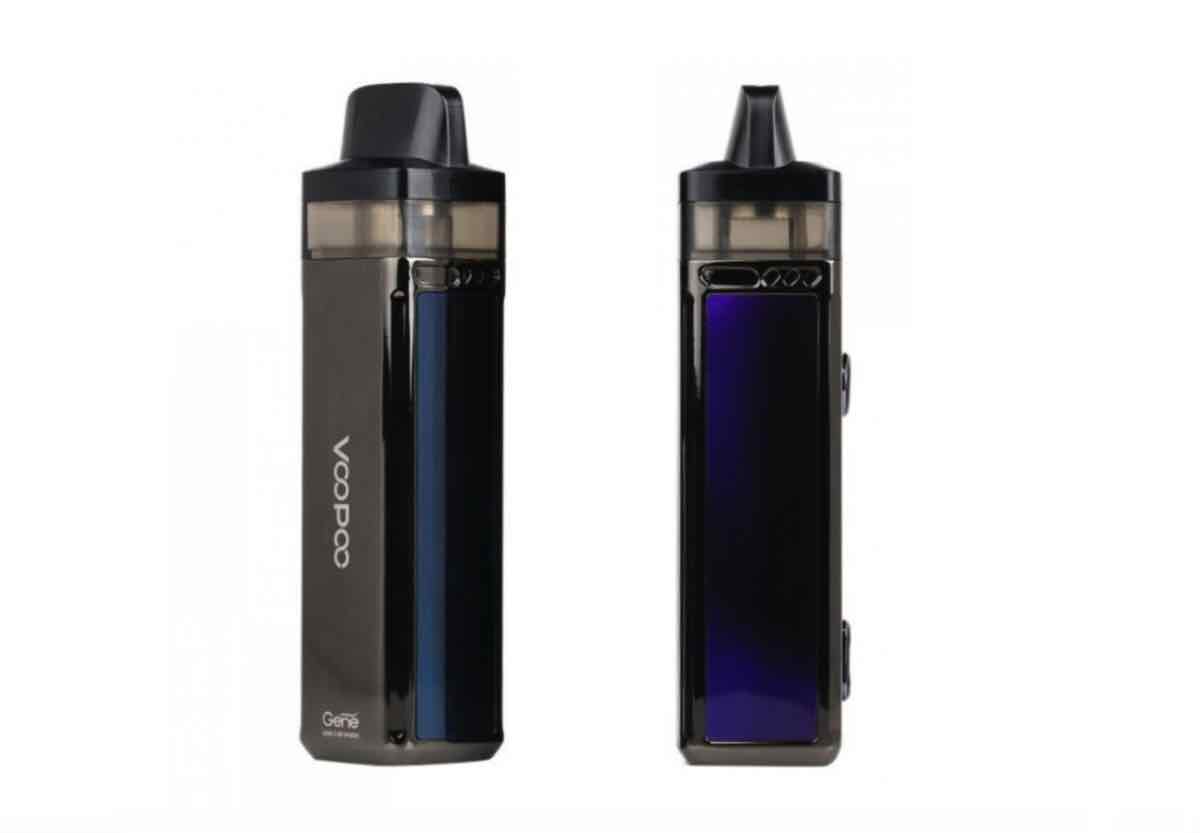 There are good reasons to choose either of these vapes. The VooPoo Vinci hits harder, going up to 40 watts, and it also has a more powerful 1,500 mah battery, so it can be expected to last longer between charges. It also has higher juice capacity. However, the Hita is smaller and more ergonomic and portable.

The Hita is an all around better vape, of that there is no doubt. It can hold more juice, has a more powerful battery, and it goes up to 30 watts. The Uwell Caliburn is a good mod, but it has nowhere near the juice and hitting power of the Hita. But, it is slightly more affordable, and it is a good vape for the price.

Asvape did an outstanding job when they made this mechanical style pod system. The best thing about these pod mods is the coils, which work well on a variety of nicotine concentrations. Additionally, the vaper has the option of making his or her own coil configurations. This is a great kit that is suitable for every kind of vapor out there.

There are a few negative aspects of using this pod mod. One, it can be challenging to build on the RBA, and secondly, pulling the coils out is quite a task. Also, there is no pass-through charging, which was a massive oversight on Asvape’s part. Other than those issues, there are no other problems.