The Veiik Airo pod device is an open-system, button-less unit that features a stunning, leather-wrapped exterior. The Airo has a slim profile and features a clean outer chassis made from zinc alloy. The device uses a refillable 2ml pod that uses organic cotton wicks.

The coil resistance of the pod is set at 1.2ohms to deliver an unparalleled mouth-to-lung vaping experience. The device can perform at a direct-lung level, as the battery section features air-intake holes that users can leave open or closed.

An Up-Close Look at the Veiik Airo

Users can choose from a no-nonsense, all-black device, a rainbow-black device, or red, blue, and brown, all of which lend the device an air of elegance and sophistication. The entire battery section has a clean, button-less design, which makes the Airo air-activated. Users need only fill their pod, let the wick saturate, install it and then start vaping. 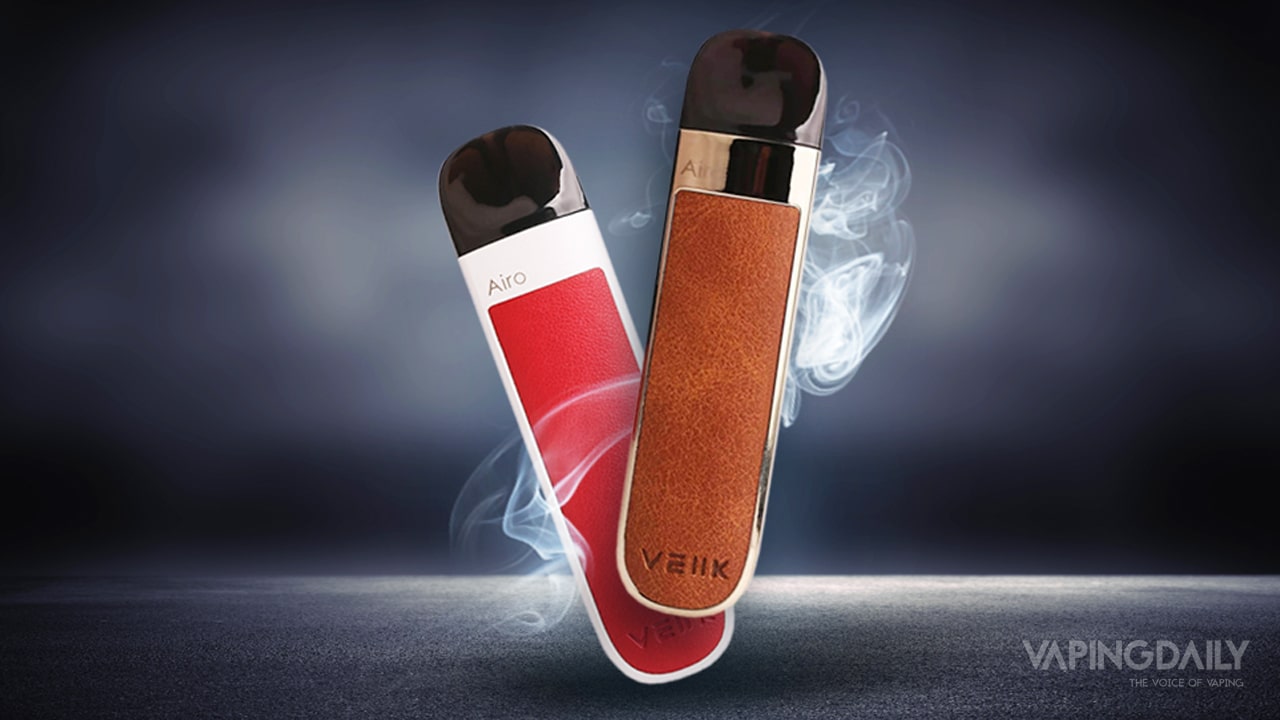 Along both sides of the battery section are two air intake holes that feed directly into the pod. Users can elect to cover up both holes, leave one or both open to create a direct-lung vaping experience. At the tip of the battery, there is a LED band that curves along the base that shows users the cell’s battery level or the status of the charging process.

There is a small USB port on the side of the unit also where users can charge the battery. The Airo kit includes a micro USB charging cable. The average battery capacity of the cell ensures a speedy charging time, although the battery life may be a little lacking. We will explore that further in other sections. 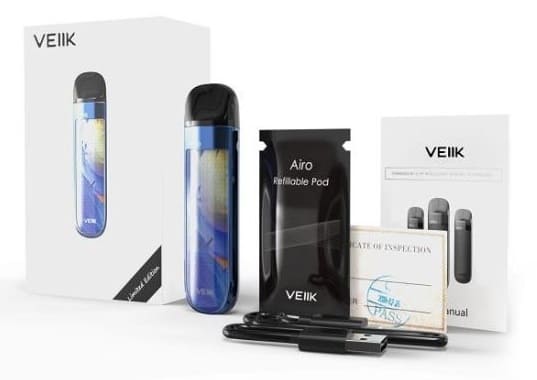 The Airo comes packaged in a smart-looking box that contains all the essentials for the device’s smooth operation.

Here’s what you’ll find in the Veiik Airo kit:

The Airo pods do not differ in design and functioning from other popular pod devices like the Nord or Caliburn. The units are fully integrated so there is a mouthpiece attached at the top. The pods are not meant to be opened or “hacked” but some vapers have found ways to crack them open to replace the 1.2ohm horizontal coil inside.

Using the pods requires only to fill them and install them into the battery section. The Airo pod has a side fill port that is stopped with a silicone plug. The plug is not attached and given their size you could easily lose them, which is why Veiik included four extra ones in the box. The plugs are not easily removed, but they do eventually come out.

The fill port can fit unicorn-style bottle tips so filling them is not so difficult. Fill the pod and close up the port. Let the cotton inside absorb the e-juice for about a minute or two before installing it into the battery. There is a sticker on the contacts at the base of the pod that users need to remove before installing.

The Look and Feel of the Airo Pod

The Airo pod and battery stand at under 100mm (3.93”) and at only 12.5mm (0.49”) wide so it has a sleek, portable form factor. The bottom tip of the battery section is curved, which gives the device an inviting design. The panels on the mod section feature a faux-leather sticker. Real leather would have shot up the elegance-factor ten-fold, but the sticker does a good job of imitating it. 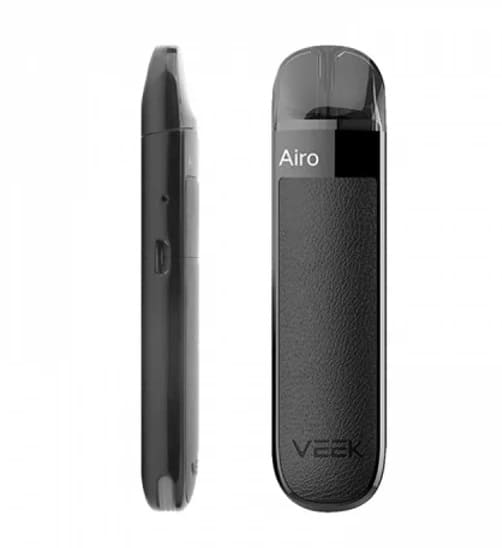 They do not rip or curl or tear so they stay in place even when in use. There are five color options for the device and they all stand out. The USB port on the device sits on the sides, along with the two air intake holes that are ergonomically-placed so users can have better control over their vaping style.

The first version of the Airo had a 250mAh battery that was the first production run of the device. Responding to criticisms that the battery capacity was low, Veiik replaced the 250mAh cell with a larger 500mAh battery that offers more battery life without sacrificing on the unit’s slim build.

A 500mAh battery combined with the 1.2ohm resistance coil in the pod allows users to vape for at least a day or day and a half with light to moderate use. The battery also features pass-through charging so users never have to put the device down if they run low on battery power. The battery also enables fast charging, but charging time was about an hour, so for a device of this size, one hour is not so fast.

The Airo promises users both a mouth-to-lung and a restricted direct-lung hit, although it does not offer the best direct-lung experience for a pod device. Covering the two airflow holes does not create as much restriction as with a sub-ohm tank or other similar devices. The mouth-to-lung capabilities are more obvious and the pods and coil succeed in that aspect. 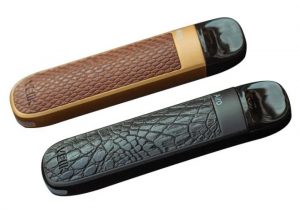 With a high-nicotine salts e-juice inside the pod, the Airo was able to deliver a satisfying hit, even though it took a few pulls to make that happen. Still, the pod fires instantly; there was no gurgling or spit-back from the tank, maybe because the chimney on the mouthpiece is not wide-bore but it was still able to prevent e-juice from touching the mouth.

The LED band along the tip of the battery section serves to show users the battery’s charge life as well as when it is fully charged. It also lights up when the pod is installed and when user’s take a draw.

There are only three colors that the LED displays, which represent various things:

The LED also flashes white while the battery is recharging.

The Airo pod is very easy-to-fill. Users need to remove the silicone plug, which is the most difficult part of the filling process, and it is not that difficult. The plug comes off completely so make sure not to lose it or put it in a safe place while you are filling the pod. The kit includes replacement plugs for such an occasion, but, strangely, Veiik chose not to attach the plug to the pod.

The pods are not fully transparent but they are not entirely opaque either. It is hard to see the juice level and impossible when the pod is in place. When vaping, users would have to remove the pod to check the e-juice level, which can be a bother sometimes. The company recommends letting the cotton wicks saturate for a few minutes before vaping, which is standard advice.

Once the pods are full and the wicks are juiced, users need only line up the pod’s angled side with the angled side of the battery to ensure proper installation. The magnets connect well, but the connection is not so strong that users would have to struggle to remove the pod when needed.

The Puff Bar is a fully disposable, air-activated pod vape that features an internal 280mAh battery and a pre-filled liquid pod. The pod can hold up to 2ml of e-juice similar to that of the Airo, while the nicotine strength for the liquid inside comes in two varieties. Users can choose from either 20mg or 50mg of nicotine per flavor. 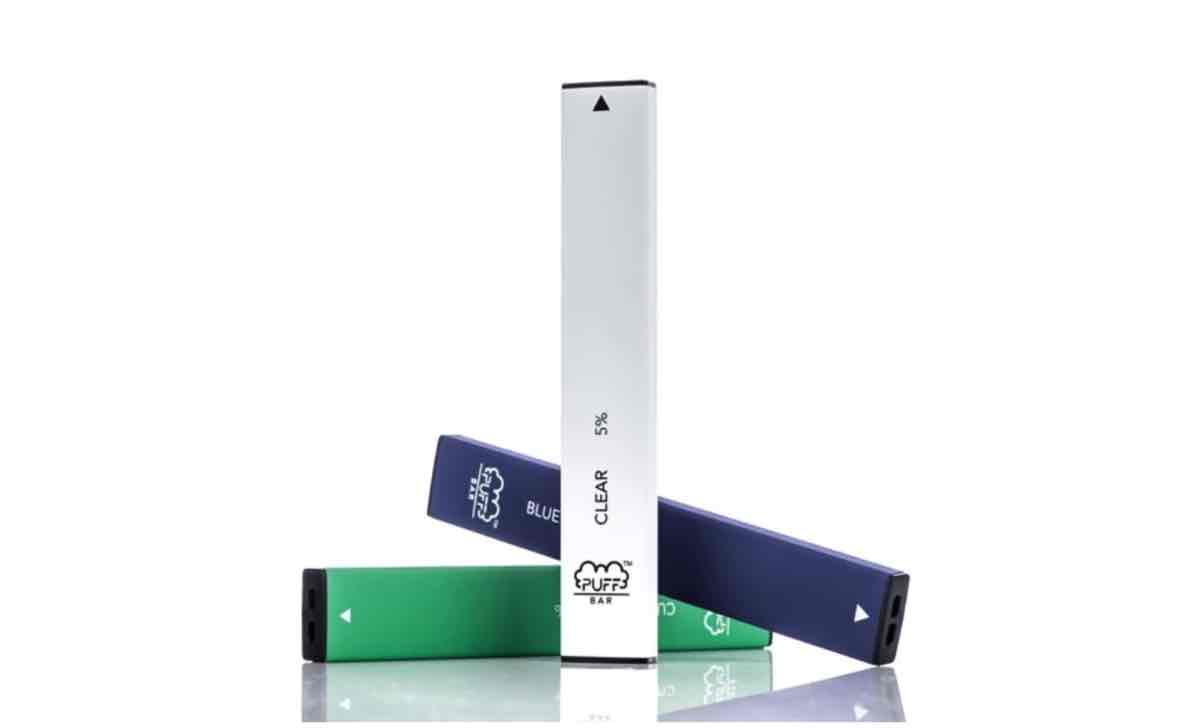 There are close to twenty different flavor options for the Puff Bar. The flavors divide between nicotine strengths. The 20mg nicotine flavor options include Blue Razz and Watermelon, while the 50mg option has more options ranging from Lush Ice, OMG (Orange, Mango, Guava) and Lychee Ice.

The Posh Vapes disposable units are also draw-activated as they feature no buttons on its exterior shell. The device uses an internal 280mAh battery and a pre-filled liquid pod that can hold 1.5ml of e-liquid. There are several flavor options available for the device including Cool Mint, Pink Lemonade, and Mango Frost. 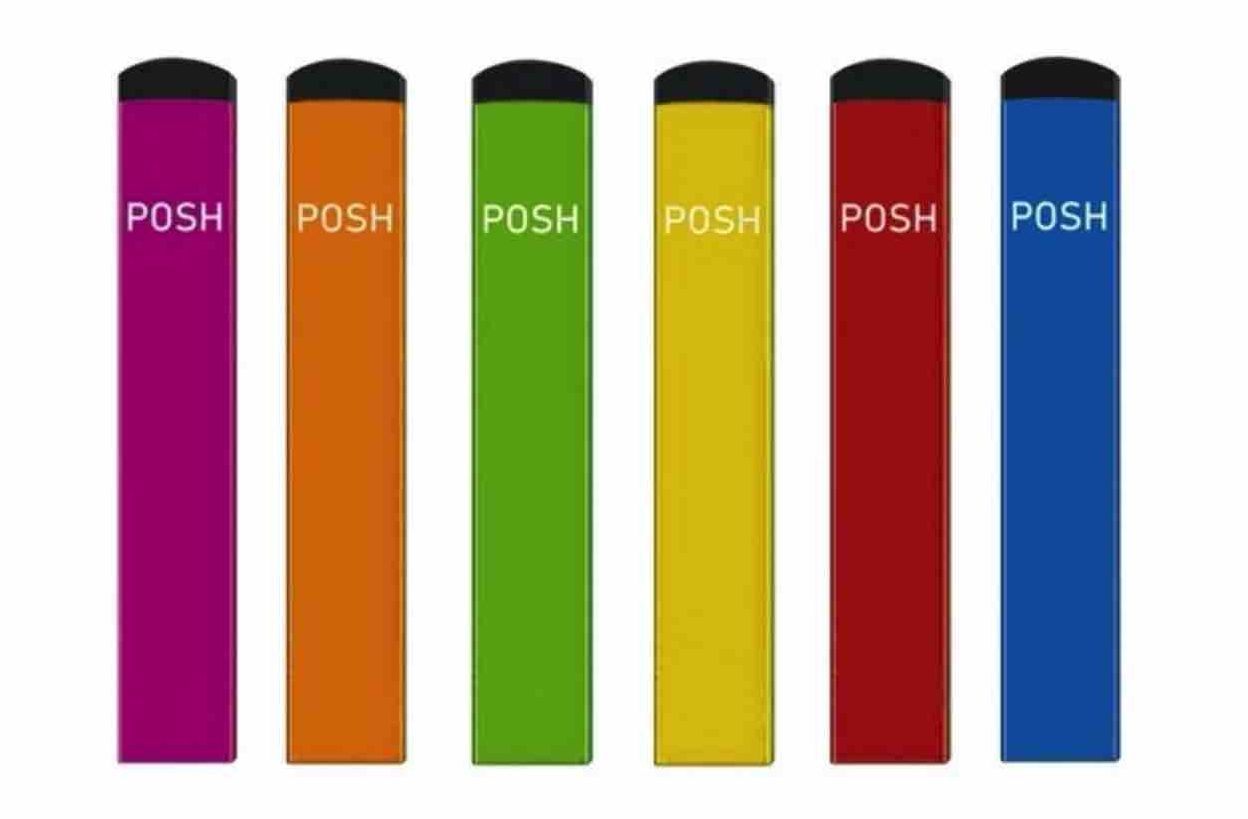 Users only have one nicotine strength available for the nicotine salts pod, which is 60mg. The battery can last for up to 300 puffs, and there is a Posh Vape Plus option that gives users longer battery life.

The Veiik Airo Pod is the latest entry in the always-expanding world of pod devices. There is nothing completely revolutionary about it, although it does have an impressive aesthetic, easy functioning, and a satisfying throat hit for those former smokers.

Its buttonless design draws in non-vapers who are looking for a starter device, while the quality, mouth-to-lung hits could satisfy even the most discerning direct-lung vaper.