Review Score: 95/100 - 95
Price Range: $39.95- $49.95
Colors: Matte Black, Brushed Steel, Opal, Rose Gold
When first starting out vaping it can be difficult to choose which vape to go for. There are a lot of starter vape kits out there on the market, but this doesn’t help. The saturation of the market means that the genuine quality products can easily get lost in a sea of mediocrity. What’s the solution to this problem? Go for a trusted, well-known brand that has a reputation for providing quality products. V2 are well known for providing high-quality vape pens and e-cigarettes.

V2 is a company with a huge reputation in the e-cigarette world. They’ve garnered a lot of good reviews from many different outlets for their products, and this is their latest foray into helping people make a move into the vaping world. The V2 Ex Series Electronic Cigarette is an entry-level model that is aimed at people who are taking their first tentative steps toward vaping. It has a good price point and will appeal to many people who don’t want to spend too much when they make the switch to vaping.

Does that mean that the V2 Ex Series is an e-cigarette that is low on quality and low on features? It indeed doesn’t, and throughout this review, we will take an in-depth look at precisely what the V2 Ex Series offers. It’s a simple to use the device, that doesn’t hold back on useful features, but does it do enough to live up to the well regarded V2 name?

One of the first features that the Ex Series offers is the changeable cartridges it uses for e-liquids. Each cartridge includes a window on the side so that it is easy to tell when the Ex Series is running low on juice and includes a coil at the end of the cartridge. It makes for easy changes when the juice runs out, and the airtight seal limits the chances of leaks. This is very different to most starter kits where the user is expected to learn the intricacies of refilling a tank straight away. It makes for a user-friendly experience that helps to encourage people to continue vaping.

The flavors of the e-liquids are quite varied too. V2 offer 12 different flavors which give plenty of variety to new users who aren’t prone to huge levels of experimentation. Of course, the cartridges can also be refilled with juice if the 12 flavors on offer aren’t enough, so there is the ability to increase the number of flavors on offer if the variety of 12 flavors isn’t enough. This can make the V2 Ex Series more prone to leaking though.

The V2 Ex Series itself has an innovative battery in comparison to most starter kit e-cigarettes. The battery has an LED light that runs up the side and gives an idea of how much battery life is left. This is different to a lot of other products where the user finds out the battery is dead when it stops working. It also lasts a good length of time when the small size of the device is taken into consideration. It can give between 300 and 500 puffs from the 280mah battery depending on how the user vapes.

Given a sleek, metallic finish and available in different colors, this kit from V2 is a beauty to behold. Unlike other cig-a-likes that try too hard to mimic the look and feel of traditional cigarettes (and fail), this particular e-cig exudes style and grace

The design for the V2 Ex Series is remarkable in that it manages to retain a sleek, slim design without being flimsy and easy to break. The device itself is of high quality and feels like you are holding more than just a cheap plastic device in your hands like some other devices on the market. The tanks fit in well with the device itself, and despite the battery offering a good usage time it doesn’t stick out from the device or impact the design in any way.

All of these excellent functional design choices don’t change the fact that the V2 Ex Series looks fantastic. It has a level of class that harks back to the age when people used cigarette holders. It’s not garish regarding how it looks. Added to this it fits into the user’s hand quite easily. This ensures that it won’t draw attention when it is being used. The weight of the V2 Ex Series isn’t enough for it to feel cumbersome when it is being held, but at the same time, it doesn’t feel cheap either. It is just the right weight to feel as though it is a quality device without it becoming a burden to hold.

It comes in a range of colors also, so it has an option for almost every taste there is. This dedication to variety is something that sets V2 apart from most other companies, and the Ex Series hasn’t been left out in this quest for user satisfaction.

One of the problems with standard vape pens is the battery life. The Standard EX Kit improved on this by offering larger capacity batteries for longer vape times. The EX batteries measure just 100mm but last for about 300 puffs. Considering that the output is 4.2 V, which take in more power than regular 3.7 V batteries, the number of puffs on one charge of the EX battery is impressive.

One other thing that separates EX batteries from the rest is the use of battery indicators on the side of the device. These indicators light up to let users know how much battery charge is left.

If you’re looking to use the device quite a lot, but enjoy the simple design and easy to use structure, having 2 batteries would help you out a lot. V2 do not offer a portable charging pack for this device.

The V2 Ex Series provides what can only be described as a superb throat hit. With a lot of starter kits, the MTL vaping experience can often be a little flat and leave people feeling unsatisfied. The Ex Series doesn’t suffer from this in any way at all. The throat hit gives a realistic experience without overwhelming at the same time. It is as close to perfect as can be. And coming from a starter kit this is even more important to people who are new to vaping. 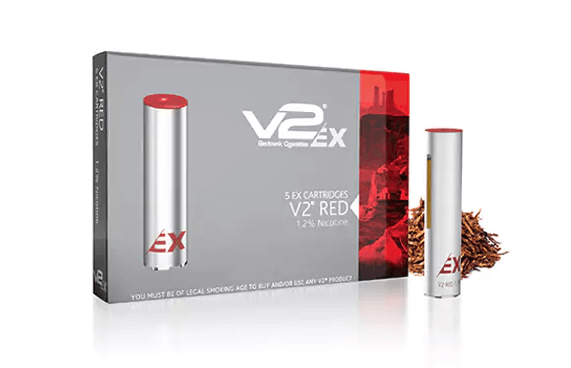 The EX outputs 4.2 V, as opposed to the standard 3.7 V from other vape pens. As a result, vapor production is more impressive than similar products from other brands. You will be able to create quite large clouds, however, the average user of this device wouldn’t really use it for the clouds. People looking for a similar experience to smoking will mainly use this device. A strong flavor would be a much better option for them. This device manages to provide quite a strong flavor, depending on the juice you’re using. 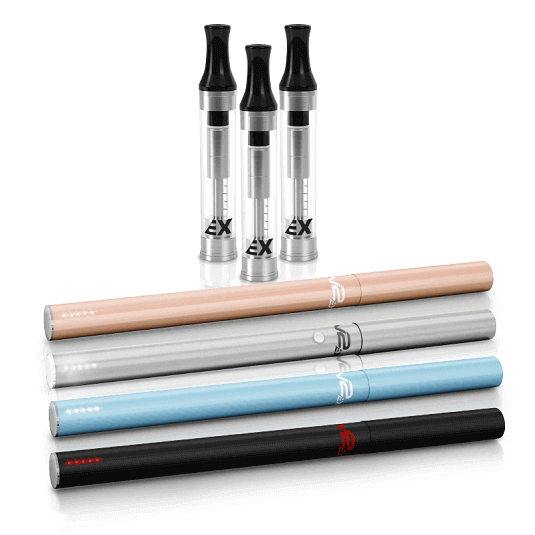 How to Refill the Mini Clear Cartomizer in V2 Ex

The Innokin Endura T20-S Kit is the closest competitor that the V2 Ex Series has on the market. While the T20-S does have a slight edge when it comes to battery life and price, it doesn’t manage to compete in many other areas. The throat hit is slightly better with the V2 Ex Series, the design is cleaner and less cumbersome with the V2 Ex Series, and it’s a lot easier to change the cartridges on an Ex Series than it is to fill up a T20-S.

Overall, while the T20-S is an excellent starter kit, it doesn’t offer enough to challenge the V2 Ex Series and comes up short of taking its title of the best e-cigarette starter kit.

Mig Cig Economy eCig Starter Kit by MigVapor has the same battery capacity as V2 Ex (280 mAh) with the same volt power of 4.2. Being almost similar in technical properties these 2 electronic cigarettes differ in design making advance to more subtle Ex series unlike the original cig-a-like design of the Mig Cig. Yet, what plays a role is the number of cartridges in a kit. V2 Ex Standard Kit has 2 times more flavor cartridges included for almost the same price.

The V2 Ex Series is an excellent starter kit for any users that are new to vaping. It doesn’t offer extensive features like some box mods that are out there, but for someone just starting out, it offers an excellent amount of features. It is simple to pick up an use, anyone who picks up the V2 Ex Series could realistically be vaping with it almost as soon as they have fully charged it.

It is easy to refill, as it has an excellent battery life relative to the size of the device, and it gives levels for both the battery and the e-liquids. The design is almost faultless, offering an excellent size and weight and a sleek look that is effortlessly classy.

Overall this is a device that will allow users to access vaping simply, without losing out on functionality. It won’t scare people away from the vaping experience, and it is indeed priced in such a way that it is a cheaper alternative to smoking. 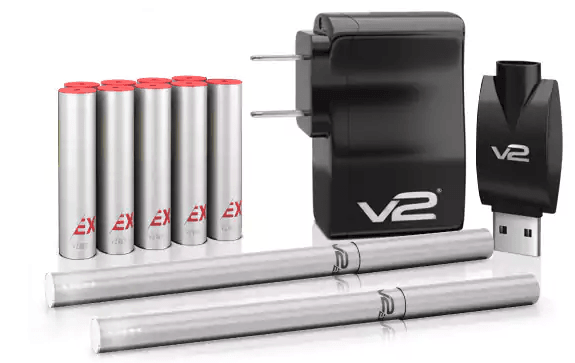 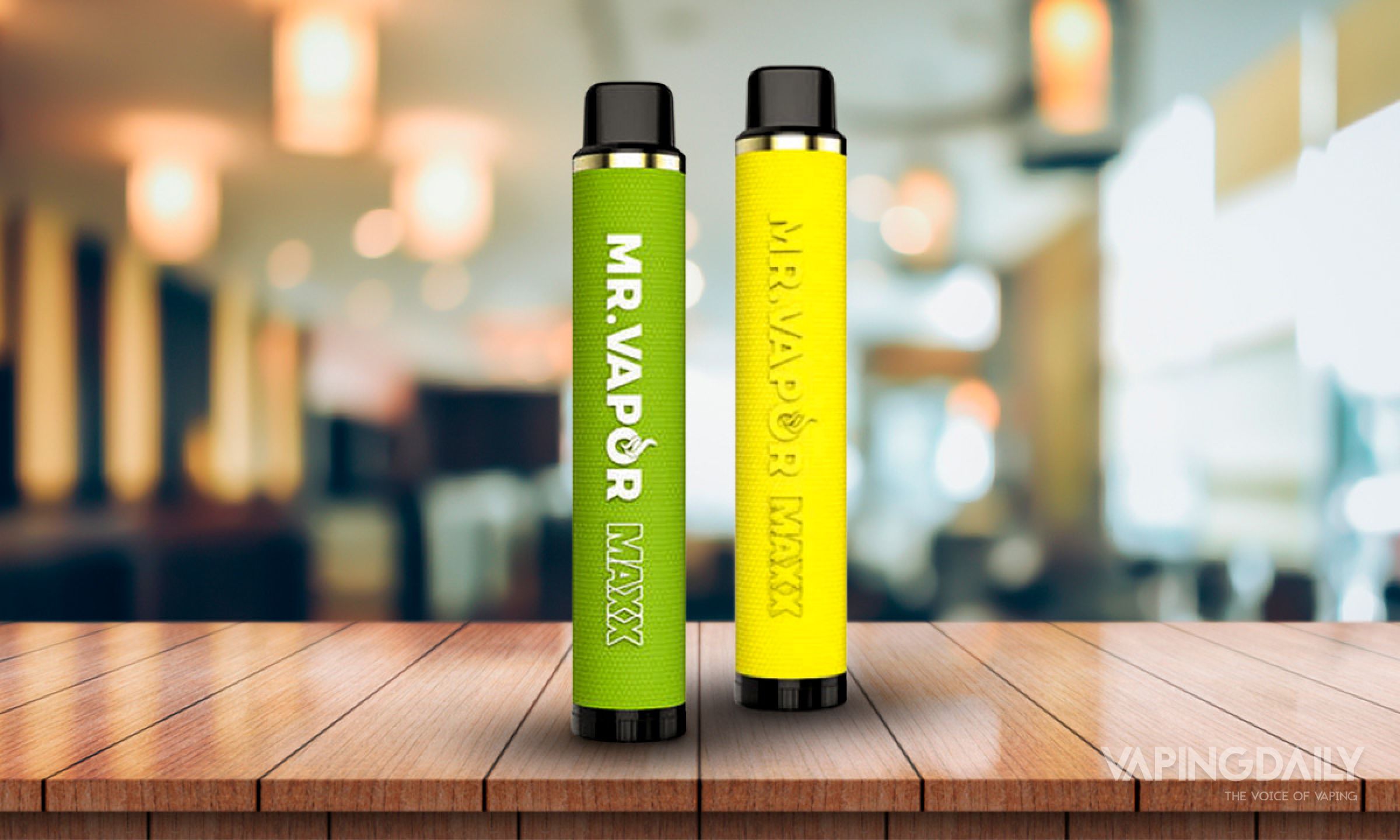 January 19, 2023
The Mr. Vapor Maxx is an adjustable airflow disposable vape. It is available in 21 highly creative flavors, and it uses completely tobacco-free nicotine. 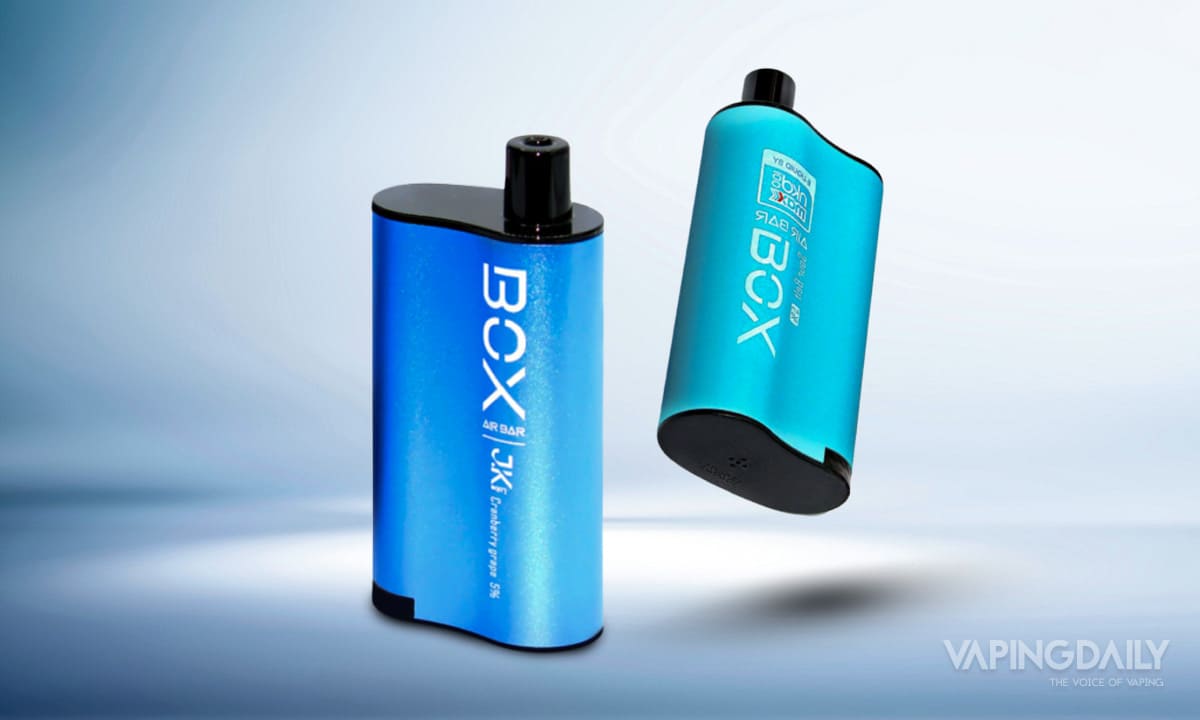 October 13, 2022
The Air Bar Box is fully disposable with an internal 1500mAh battery and can last up to 3000 puffs, but what flavors does it come in? Find out more here. 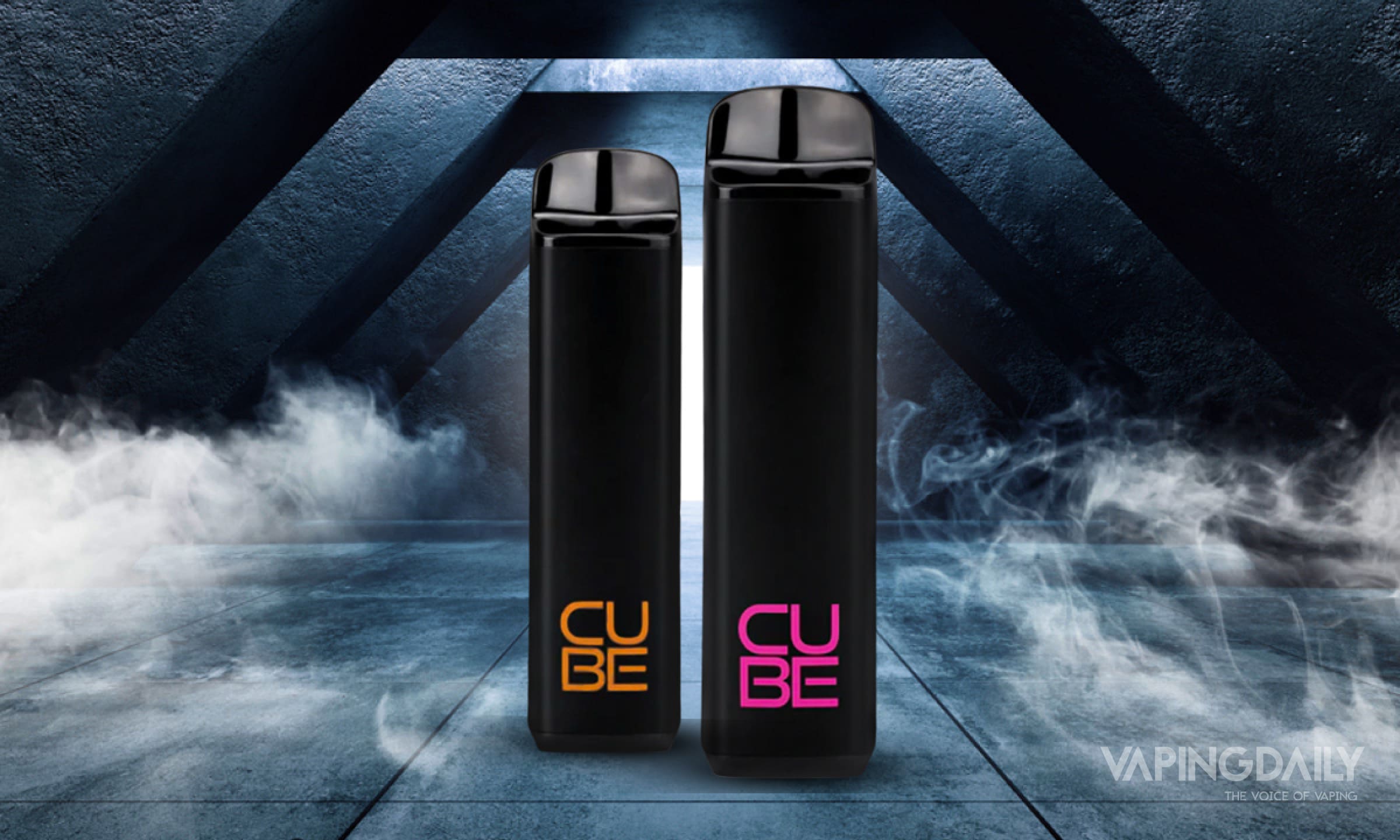 September 14, 2022
The Cube Zero is a disposable vape pre-filled with nicotine-free e-juice that comes in 20 different flavors, but are they worth it? Find out here. 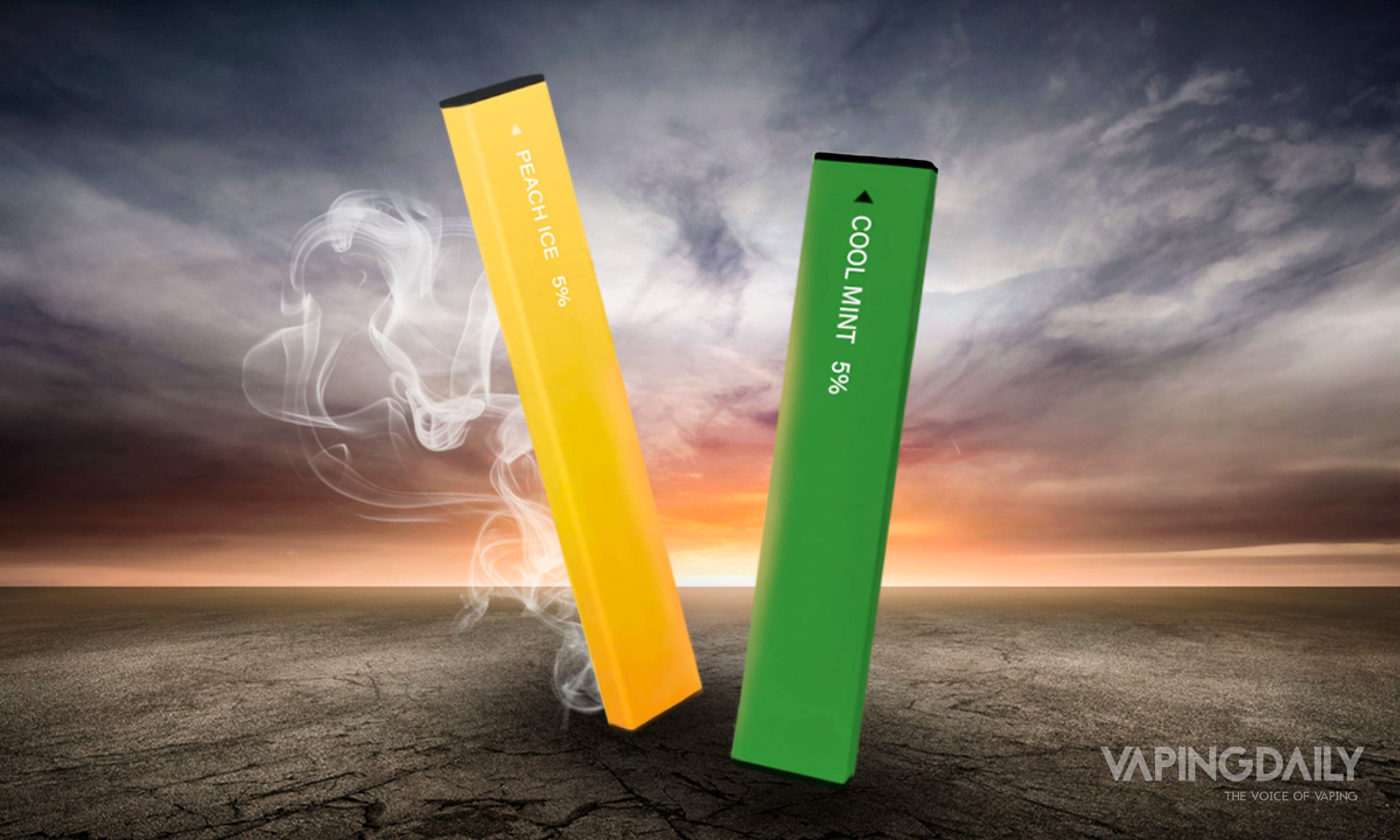 July 19, 2022
Steam Engines are disposable vapes that have 280 mah batteries, 1.3 ml of salt nicotine, and ten ice flavors, such as cola, lychee, and cool mint.