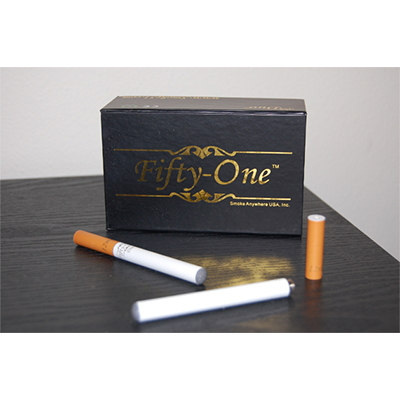 I have to share something right off the bat. Smoke 51 was the first e-cigarette starter kit that I ever purchased. It was some time in 2011 and I wasn’t even aware that vapor cigarettes were a real thing until I had tried a Blu disposable and enjoyed it.

But naturally, I wanted the ability to recharge the battery and choose flavors. So I immediately set out in search of a starter kit, though I had no idea how e-cigarettes worked or even what came in a starter kit!

But, instead of looking around online to see all of these innovative brands selling great products, I decided to head to the local smoke shop. The store owner had me completely convinced that Smoke51 e-cig starter kit was the best option I could get for my money. It looked pretty snazzy too:

I left the store with $70 less than I had entered it, but I was so excited to have my first starter kit! But that excitement would not last as the reality of the situation dawned on me. Let’s talk about the brand that almost caused me to quit vaping forever.

Problems with the Smoke 51 Starter Kit

First of all, one of the two batteries was demented so that it wouldn’t fit with the cartomizer or charger. So I only had one battery instead of two. And the “good” battery would last about 100 puffs before I had to charge it again.

And the basic tobacco flavor, the only flavor they offered at the time, tasted truly bad. It was the most unsatisfying e-cigarette experience I’ve had to this day. I ended up smoking tobacco the very next day.

And I didn’t return to e-cigarettes for another year. I was convinced they just were not a good replacement. And that is the problem with sub-par brands on the market! They sell their low-quality products to people and give a bad name to the entire industry.

I later found out that he was pushing me so hard to buy a Smoke 51 kit was because the 51 stood for 51% commission for the person who sold it. Looking back, I find it offensive that people in business can put money over health so easily.

Anyway, I’m not going to go buy another Smoke51 kit for this review so it will be coming from my memory. And I am okay with that because by the looks of their website, they are selling the exact kit that almost turned me off to e-cigarettes forever.

So I’m going to do a short review by category, but I think you already know to stay away from this brand.

Alright, let’s take a look at the typical aspects that we rate e-cig products by vapor, flavor, and battery life.

There was hardly any vapor, even when the battery was fully charged. Half the time no vapor would even come out when I exhaled. This was an archaic model, but it looks like they are still selling the same sort of thing today. The casing even looks the same!

There were no flavor options to speak of. Tobacco was all you got. I normally don’t care for tobacco flavored e-liquid anyway but this was a different kind of bad.

Well, one battery never had a life. The other couldn’t last for more than an hour. So disappointing.

Wrapping Up This Short Smoke 51 Analysis

Don’t buy it. I think you get the message. We recommend Halo E-Cigs (read our Halo Review)  for their Triton Tank System. It’s a beautiful setup that produces enormous vapor and can be refilled with any flavor or strength of e-liquid you choose.