Save-A-Smoker Ecigs Review – Enough To Turn You Into a Vaper?

Known more for its e-liquid, Save-A-Smoker also has a line of disposable and rechargeable e-cigarettes. Products are priced higher than what others charge for; however, their e-liquid is still a favorite among many users, though the e-cigarette kits are a different matter. 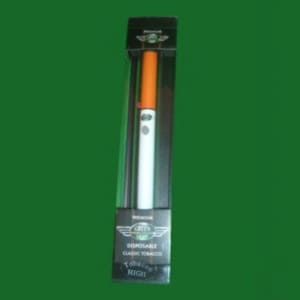 Priced originally at $12.95, the Green Light Disposable offered by Save-A-Smoker is on sale at a low price of $4.95. It is a little different than other disposables in that it is a manual device rather than automatic (this means users would have to press a button to activate the unit).

Flavors available are Classic Tobacco, Menthol, Blueberry, Grape, Strawberry, Vanilla, and Watermelon. Nicotine levels for Classic Tobacco and Menthol are 0mg, 6mg, 12mg, and 18mg while the other flavors are available only in 18mg strength. For a disposable, the number of flavor choices is excellent since many other brands usually only offer two flavors for their disposables.

Vapor quality of these units, however, is just decent. Similar to other disposables, one should not expect huge clouds of vapor from each puff here. Flavors are mediocre as well and do not stand out. However, for the price, these are still a great deal, and users who want an affordable entry point into vaping should consider one of these. 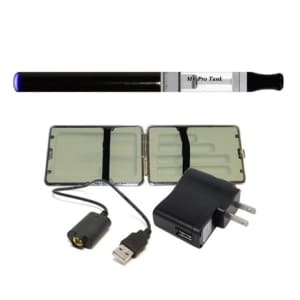 MaxxVapor is the name of Save-A-Smoker’s line of rechargeable e-cigarettes, and the MaxxVapor Pro is just one of two models available. The Tank Xpress Kit includes one battery, one refillable tank atomizer, one USB charger, and one wall adapter.

Available in 10 colors with different LED lights for each, the MaxxVapor Pro is a typical cig-a-like, and one should expect the same performance. Vapor is decent, and the battery life lasts about two hours. The inclusion of a refillable tank is great, though, since other starter kits usually include disposable cartridges.

Users who would rather get a kit with cartridges can opt to get the Starter Kit ($69). This comprises two batteries, one atomizer, one wall charger, five cartridges, and a user manual. Cartridge flavors include Classic Tobacco, USA Mix, Classic Menthol, or blanks if you want to use your own e-liquid. Nicotine strengths available are at 0mg, 6mg, 12mg, and 18mg. Buyers of the Starter Kit also get to choose a free gift. This can be a carry case of your choice of color or a car charger adapter.

For users who want to invest fully in the MaxxPro system, the Super Bundle ($169) is the one to get with lots of inclusions and extras. For the $169 investment, users will get four rechargeable batteries, two atomizers, two wall chargers, ten tobacco vapor cartridges, and a couple of user manuals. For the bonus items, users will also get 50 vapor cartridges of your choice of flavor and strength, one USB battery charger, and a choice of two carry cases/car charger/or a combination of both.

The Quality of the Products

Save-a-Smoker is obviously at the high end of the market’s price range. So you’ll want to know if the products included in the starter kits actually offer a reasonable value. We have to say that we were a little surprised to see the lack of a USB charger in the basic kit, as that’s how most people are likely to charge their e-cigs. But you can buy one on your own if you like as part of a car and USB charger combo for $11.95. Still, at the price being charged, it should have come standard.

The batteries are nothing exceptional. They take several hours to fully charge and they last about as long. They are durable though, and dropping them a few times isn’t going to affect their operation.

The vapor production is middling too, which has as much to do with the e-liquids as it does with the e-cigarette itself. Now the liquids are pretty great, and even though they are pricey, they are some of the finer flavors available.

Save-A-Smoker also has an eGo-style e-cigarette available, the MaxxVapor Elite ($69.95) as well as an eGo Twists-style model (which is variable voltage). There are also several bundles for each model as well as a full range of accessories. If you are familiar with the eGo-type e-cigs, the MaxxVapor Elite performs exactly like it. However, whether it is due to the rebranding or something else, the Save-A-Smoker version is higher priced than regular eGo kits.

Save-A-Smoker also has its line of e-juice, MaxxVapor E-Liquids, which is a bit higher priced as well. However, many users swear by its flavor and vapor quality. Flavors available range from fruity to tobacco, drinks to food, menthol to complex. In short, MaxxVapor E-liquids have a comprehensive selection of flavors wherein all vapers can find at least one they like. Prices start at $9.95 (10ml bottle).

While not as well-known as other e-liquid and e-cigarettes companies, Save-A-Smoker has some quality products that are worth a look. Especially the e-liquid which many users praise for its quality despite the higher price. As for the devices, the company offers common units that are not worth the premium price.