Play Vapor is a great e-cigarette brand for those just entering the world of vaping. Their starter kits are very simple. They come with the basics and will get you started right away.

Play Vapor offers a starter kit for $24.99. It has with three different flavor options. The flavor options are Real Tobacco, Light Tobacco, or Menthol. Cartomizers in all kits have 18mg nicotine. The kit includes one battery, one USB charger, and two cartomizers. You can choose between a black battery or a white one.

The starter includes pretty much the basics. It may only have the bare essentials to get started, but that is exactly what makes it perfect for beginners. Why complicate it with extra gadgets that you don’t need?

Play Vapor has soft-tip disposable e-cigarettes. They are available in either Real Tobacco, Light Tobacco, or Menthol. Each disposable has 24mg nicotine.

Their disposables cost $6.99 when bought one or two at a time. They have bulk pricing system. If you buy three, that cost $5.99 each. The price is reduced with the more disposables that you buy until you purchase a hundred of them. Then they are only $3.99 each.

When we decided to do a Play Vapor review, we received a few sample kits  from the company so that we could take photos and give an honest opinion.We received one kit for each flavor, plus some extra packs of cartomizers. Here are the photos that we took as we opened the kits: 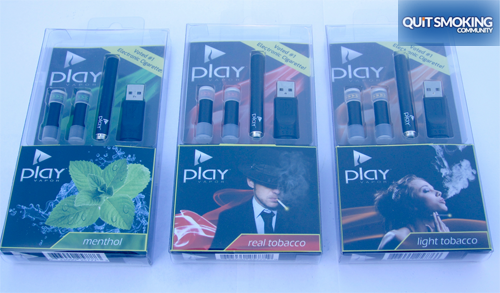 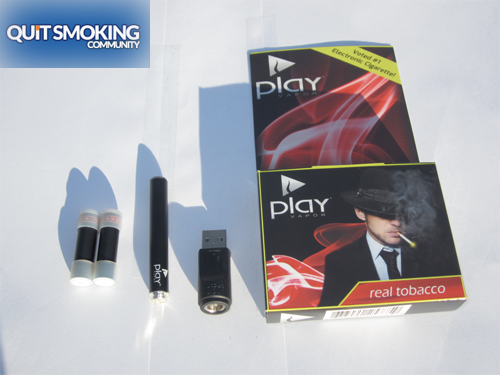 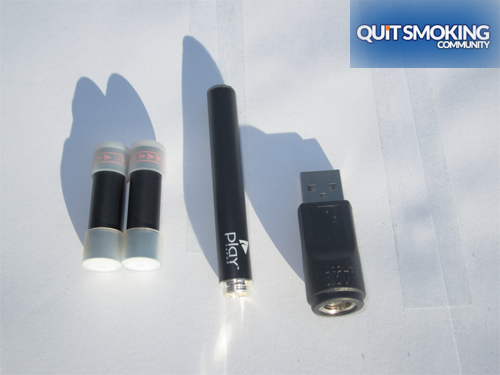 Play Vapor’s selection includes three versions of the same starter kit, disposable e-cigarettes, six flavors of cartomizers, two battery colors, a USB charger, and a car charger. That is basically everything you need to start vaping. Play Vapor keeps it simple by not confusing people with several different kits and a ton of accessories. You get everything you need. Still, it would be nice to see a little more selection.

The Play Vapor starter kits are in a plastic packaging that shows all of the contents inside the kit. There is a piece of card stock inside that shows graphics and unfolds to display instructions and a coupon. The design is pretty simple. There is nothing too special about it. But that is kind of what gives Play Vapor its charm. The starter kits get straight to the point.

Play Vapor is better than average for vapor in its class. It makes lots of fluffy vapor clouds. Play Vapor produces enough vapor to blow vapor rings, so it satisfies my vapor production standards for e-cigarettes of this size. The throat hit is also good.

I have brought the Play Vapor electronic cigarette around with me while being out all day, and it was able to last until after I got home and put it on the charger. I have never had a problem with it dying on me. It lasts long enough for my needs.

Play Vapor currently has six flavors to choose from:

• Real Tobacco – It is similar to Marlboro Red.
• Light Tobacco – Smooth like a Camel.
• Menthol – A sweet mint that isn’t overpowering.
• Blueberry – A light blueberry flavor. Maybe too light.
• Watermelon – Sweet and juicy like a watermelon Jolly Rancher.
• Orange – Tastes like orange candy.

It is a well-rounded assortment of flavors. All of them are delicious flavors. Their blueberry could be a little stronger. But other that that, everything was fantastic. 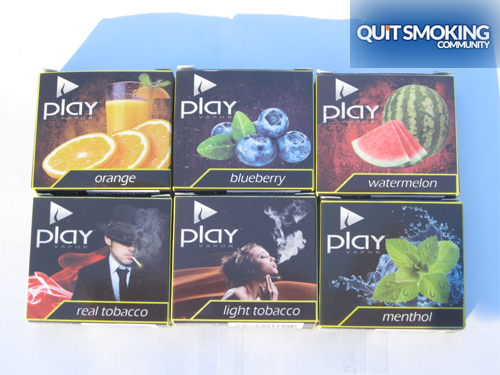 For $25, a Play Vapor starter kit makes a fantastic gift for the person who know struggles to quit smoking. I gave Play Vapor kits to three people I know last Christmas.

Play Vapor is an excellent choice for beginners because the starter kits are easy to use. The equipment is promptly displayed, and the instructions are a breeze. You will be vaping in less than a minute. Check them out for yourself and be sure to try their orange or watermelon flavors.