The eGo-T is an electronic cigarette that was one of the first devices to catch on with the public. Its simple functioning and workhorse-style gained many fans. It still passes the lips of vapers even today, especially when recalling what device got them to make the switch from cigarettes.

The eGo-T has a simple, one-button design and uses the direct voltage output of its internal 1100mAh battery to vape. The eGo-T, now as then, has a 510-thread that connects to the CE4 tank that initially came with it. The CE4 tank is plastic and uses a tiny fill port that users have to use with a special bottle to refill. The tank can hold up to 2ml of e-liquid. The battery section of the eGo-T uses a USB charger to recharge the cell, which can last for approximately 1000 puffs.

A Closer Look at the e-Go-T

The eGo-T is an exercise in simplicity, especially now, considering how far vaping devices have progressed from those early days. The device divides like many vape pens into two sections, the battery and the tank.The battery section has a single button on its frame that users have to press to activate the device and fire it.

The battery section comes overlaid with a rubberized finish to make it more comfortable to hold. The power unit also has the same circular or tubular shape as the early devices. It has a flat, rounded bottom, and has no LED behind it that tries to mimic the burning end of a cigarette. The absence of this feature is what enamored people to the eGo-T. It was not trying to be a cigarette, like cig-a-likes. The eGo and, of course, the eGo-T were something different. It was a unique device that no one had ever seen before, but it was easy-to-use and provided the effect that people were looking for. 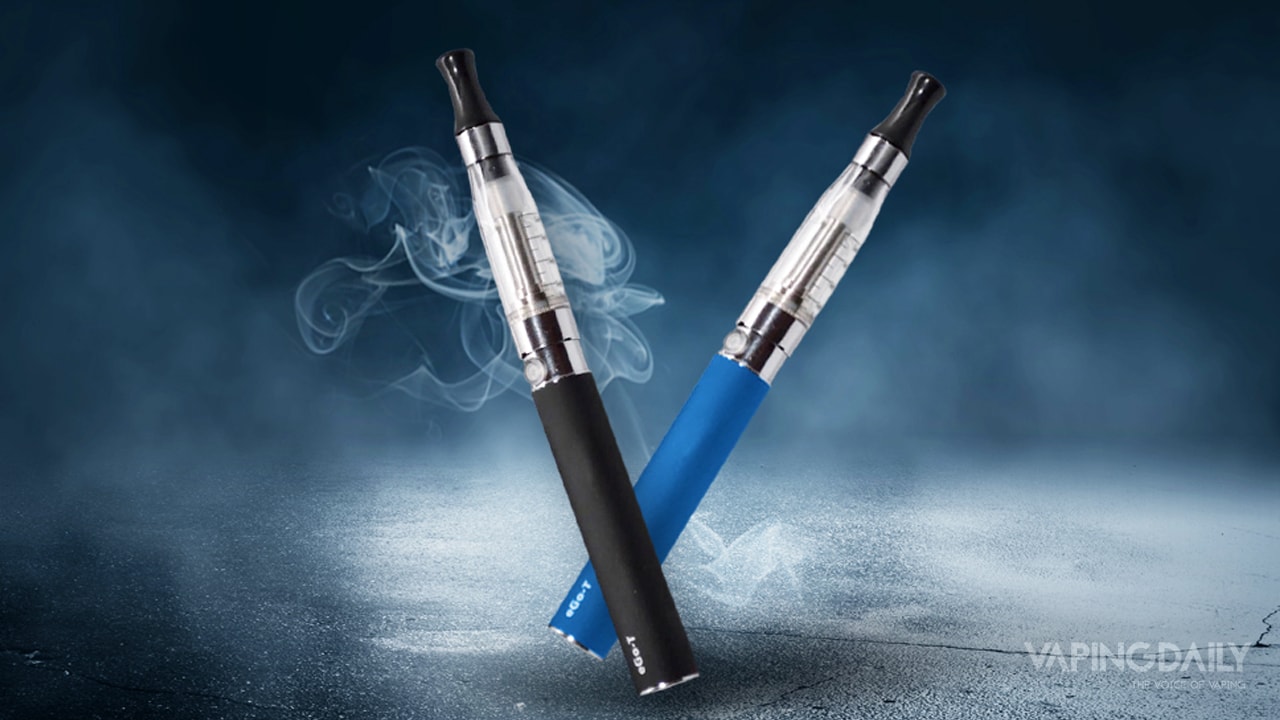 The fact that the eGo battery also allowed for users to use their preferred e-juice was another way that the device entered the hearts of many a vaper. Early cig-a-likes and vape pens were all self-contained, meaning that auser did not have any option to change the flavor or nicotine strength of the liquid already inside.

That all changed with the introduction of the eGo that used refillable tanks. The tanks, or cartomizer or atomizer whatever you prefer, could be of any style as long as they were 510-threaded, which gave the eGo cell incredible versatility.

New versions of the eGo battery and CE4 tank come packaged together, along with the USB charger for the battery. Here’s what else people will find in the kit: 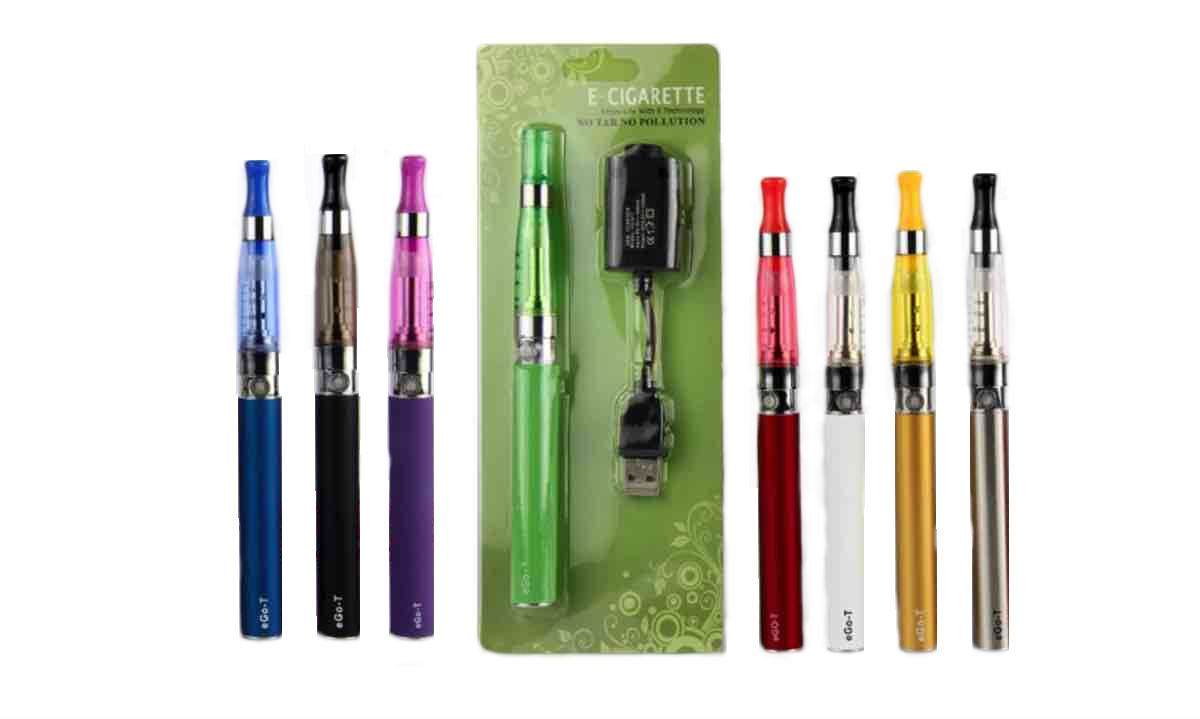 The eGo-T consists of a brushed metal battery that has a single power button in its center. The power unit has an excellent weight to it, not too light but not too heavy. The button has an LED behind it to show when the device is on and when it is in use.

The switch also lights up when the cell is charging. The power unit measures close to 76mm or 2.9” (without the tank attached) tall (87mm or 3.4”) with the tank attached. The CE4 tank that accompanies the power unit has a capacity of either 1.1ml or 2ml depending on whether you buy directly from JoyeTech or an online vendor.

The eGo-T consists of a rechargeable lithium-ion battery that has a capacity of 1100mAh, which is a standard capacity for these types of vape pens. The 1100mAh size can power over eight hours of consistent or moderate vaping. 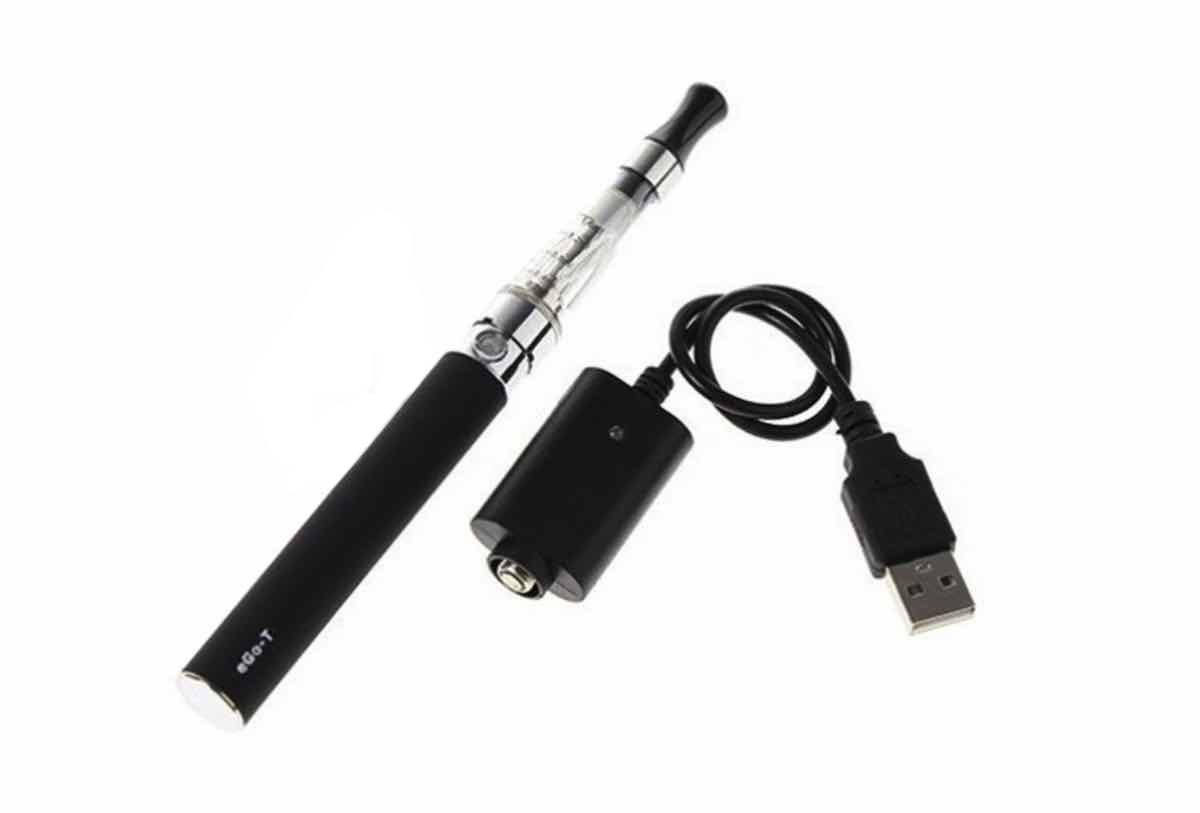 The battery can only output 3.7V on a full charge so that the power can last for quite a long time. Charging the battery, however, also takes quite a while. It takes almost three to five hours to go from a fully depleted battery to a full battery.

The CE4 and CE5 tanks that come with the eGo-T batteries are somewhat different from the original style of atomizers that came with the old-school battery. They had threaded tops and were mostly glass and stainless steel. The new ones, however, have a unique redesign. First, the new CE4 is mostly polycarbonate, which is still durable, and also very lightweight. 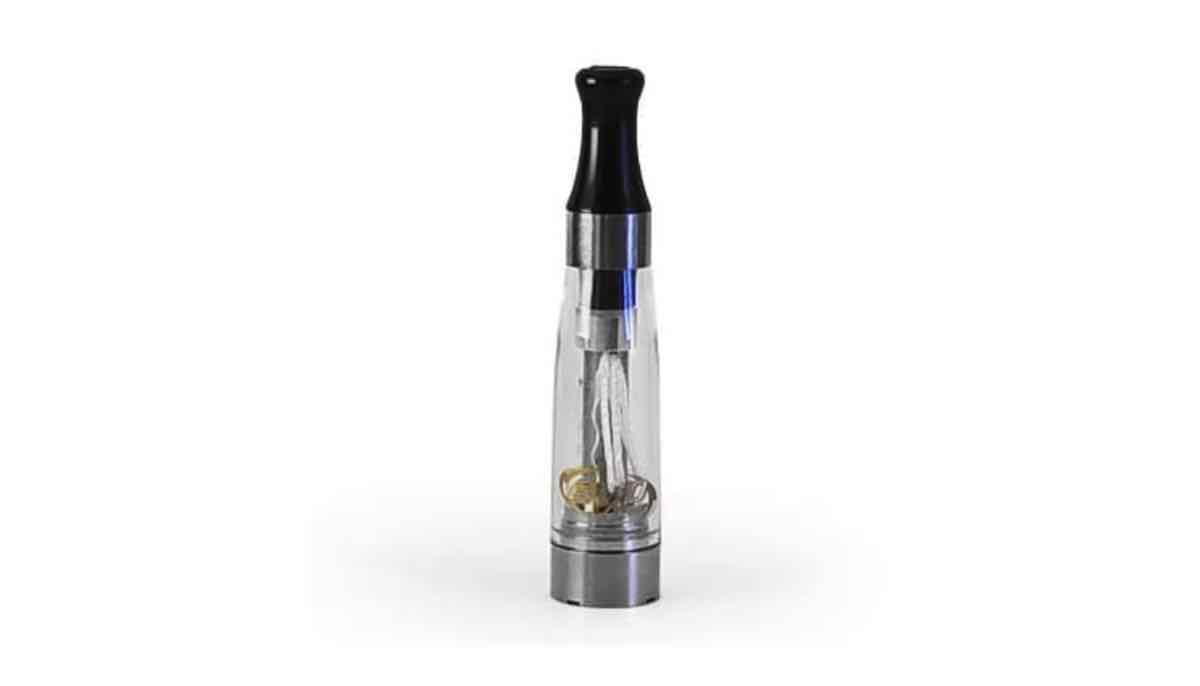 The CE4 also has a clear tank section with several fill lines so users can keep track of their e-juice levels. The wicks inside the tanks are silica, and vaper will be able to see them through the clear tank section. The tanks have 510-threaded, so they screw easily onto the power unit. The CE4 does not have a large fill port, nor did they ever. Users need to remove the mouthpiece, which is also made of polycarbonate, to access the fill ports of the tank.

The coil inside the clearomizer has a resistance of between 2.6 and 2.8ohms, which gives a good mouth-to-lung vaping experience. There are no modifications available for the unit, but it does not need them because the vape is consistently good. The power output is enough to provide a satisfying vape, but it is not a cloud pusher, so do not expect to get huge clouds from this device. 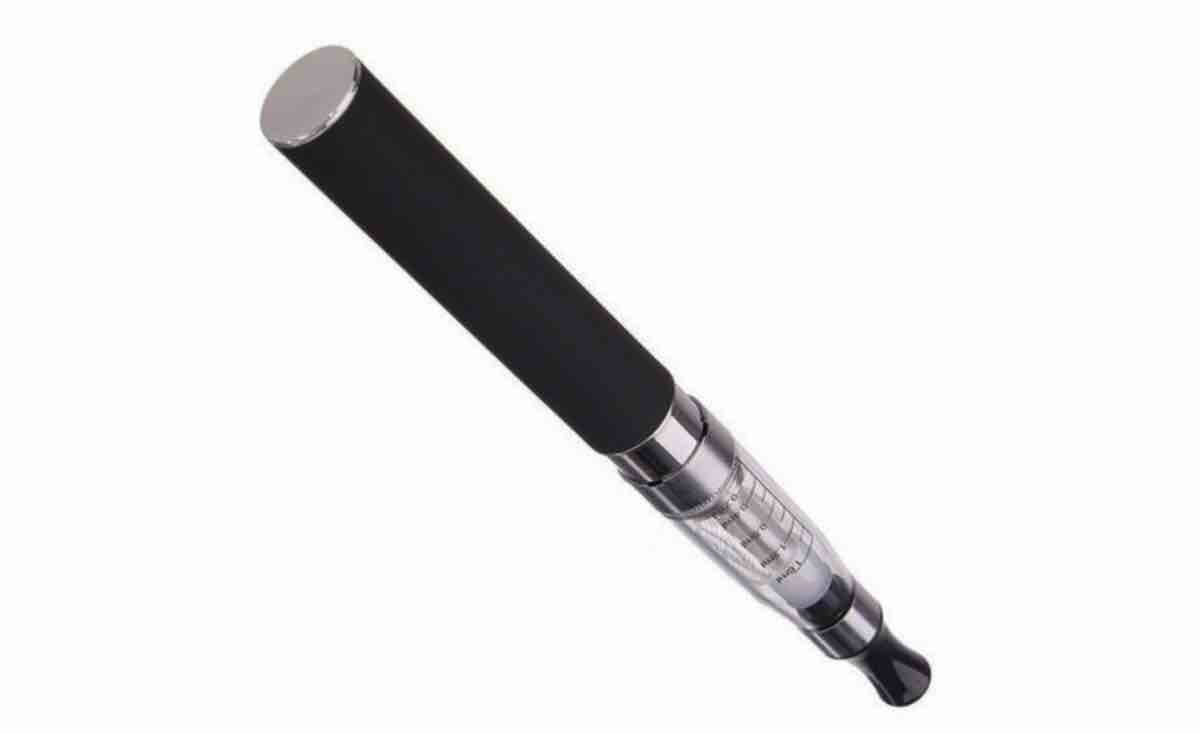 The general usability of the unit is also excellent. However, first-time users might experience leaking or spillage issues when refilling the tank, as it has a small opening to refill the tank. Users will need to use a needle-tipped refill bottle to transfer liquid to the container, as it is the only style that could fit into the small fill port.

The EVOD is a close cousin to the eGo-T as it has a similar form factor. The EVOD also has the same powerful battery, but it comes with a tank that uses removable coils so users can use the tank for a very long time.

The tank has a small viewing window on its side so users can check their levels without having to open the top. The EVOD consists of the container, which can hold 2.5ml of e-liquid – more than the CE4 – and it has an internal capacity of 1100mAh.

The eGo Twist has a 1300mAh capacity, and it also has a twistable dial at its base that lets users control the power output. Users can choose from three output settings, ranging from 3.2V, 4.0V, 4.2V. Users can also set the voltage in 0.2V increments in between those settings. 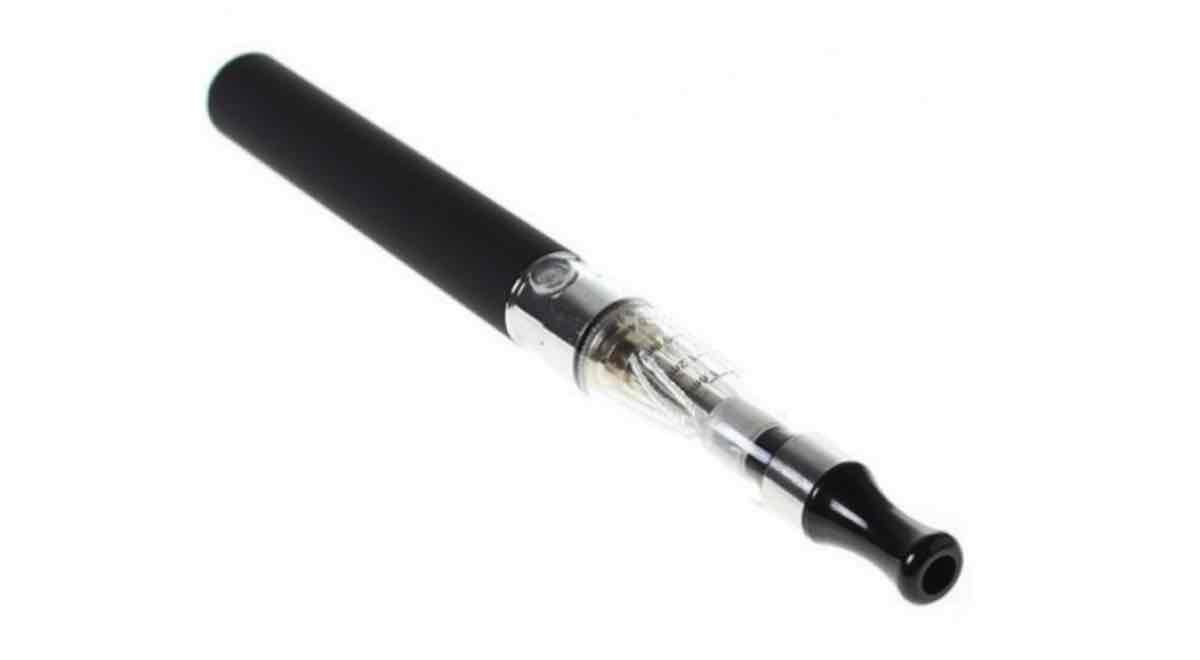 The unit can fire at the lowest resistance of 2.0ohms, and it also has 510-threading, so it is compatible with any other 510-threaded atomizer.

The eGo-T is an update to the original Joyetech batteries that came out almost four years ago. It retains the same smooth functioning of the first and does not update the device in any exciting way. The eGo-T is a starter device. It is not for regular or long-term vapers as it has no adjustable settings or functions.

The unit, along with the CE4 tank do produce consistently good vapor, though. The eGo-T should be enough to last a moderate vaper all day, even though the e-juice capacity of the tank is small at only 2ml. But, then again, the 510-threads make it easy to attach a larger, higher-capacity tank, if so desired.

Did you use eGo batteries when you first started vaping? Did you use the CE4 tanks also? Let us know in the comments section below.

One comment on “eGo-T Review: Put Your Ego-T in Check”