The VGOD Stig is a disposable, closed-system pod device that is air/draw-activated and contains a small, 1.2ml pod inside filled with salt nic e-liquid. The pod mod is fully-integrated, including the battery, and pod, as there are no removable parts of the Stig. There is no charging port, as the device is disposable and can be thrown away when it is finished. 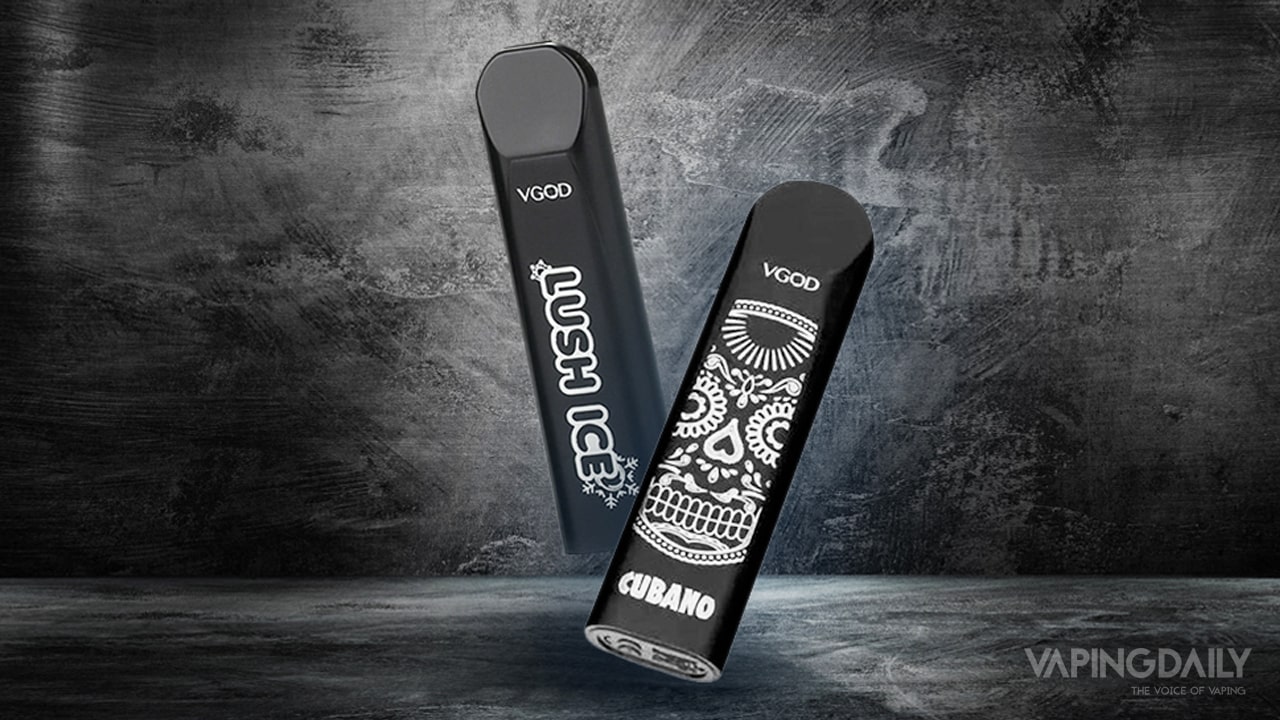 The e-liquid inside the pods are a salt nic variety with a 6% content. The liquid solution is equal to about 20 cigarettes, according to Stig, the manufacturers. VGOD offers five different disposable e-liquid pods, Cubano, Tropical Mango, Mighty Mint, Mango Bomb, and Lush Ice, all of which come in a pack of three.

As the VGOD Stig is fully-integrated, as well as disposable, each “stick” or “pod” comes individually-wrapped in a pack of three. Vapers can buy them according to their taste, but not according to strength, as there is only one option, 60mg (6%). 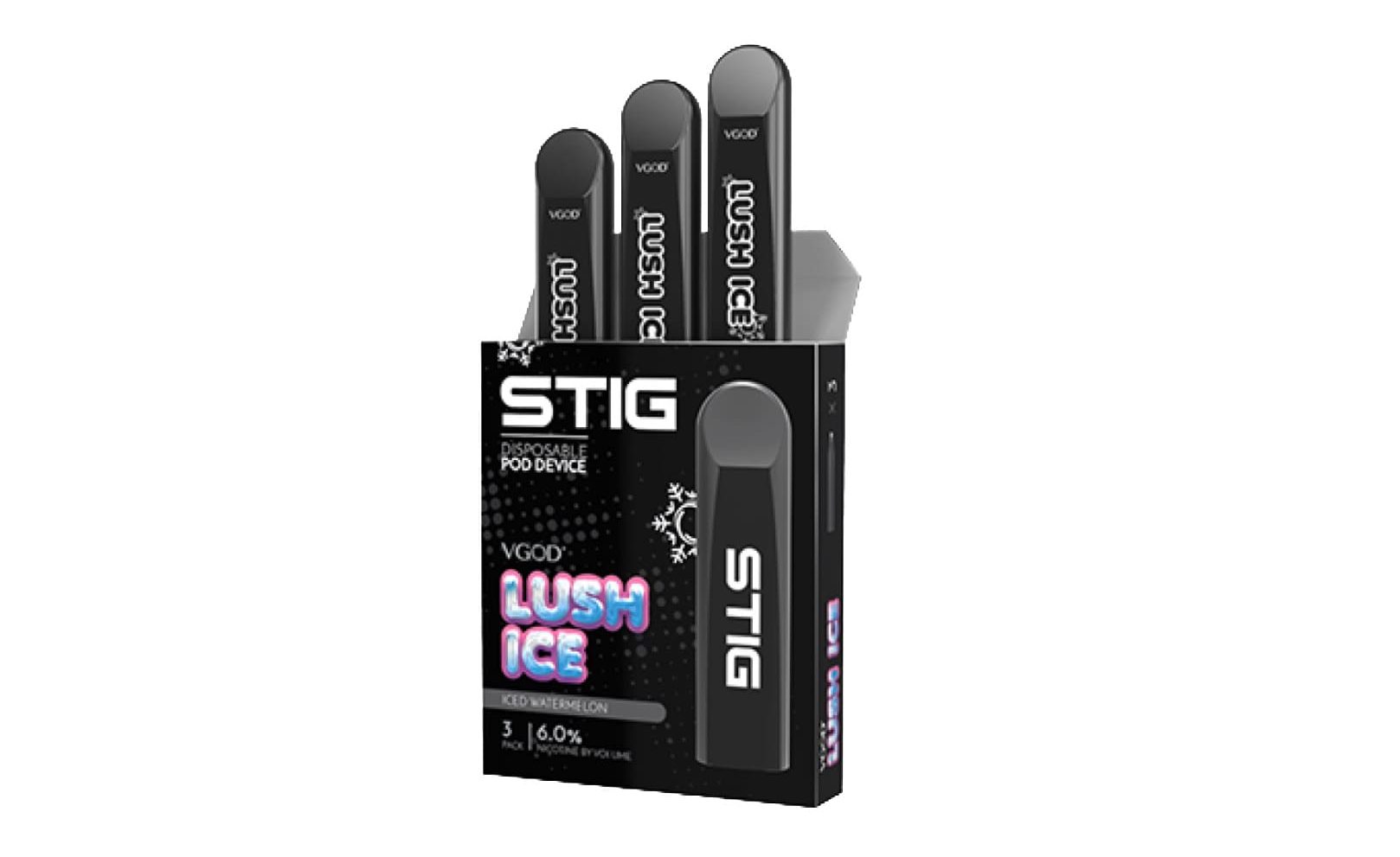 The Stig is a closed-system, disposable pod device for e-liquids, made by Stig. The VGOD Stigs are the same device but come under the VGOD brand. The e-juice options are also the same on both company websites.

The Stig is a simple-looking, and simple to operate device. The same way a person would buy and eat a popsicle is also the same way they would use a Stig pod. They unwrap it, consume it, and then throw it away (which is not the best for the environment). 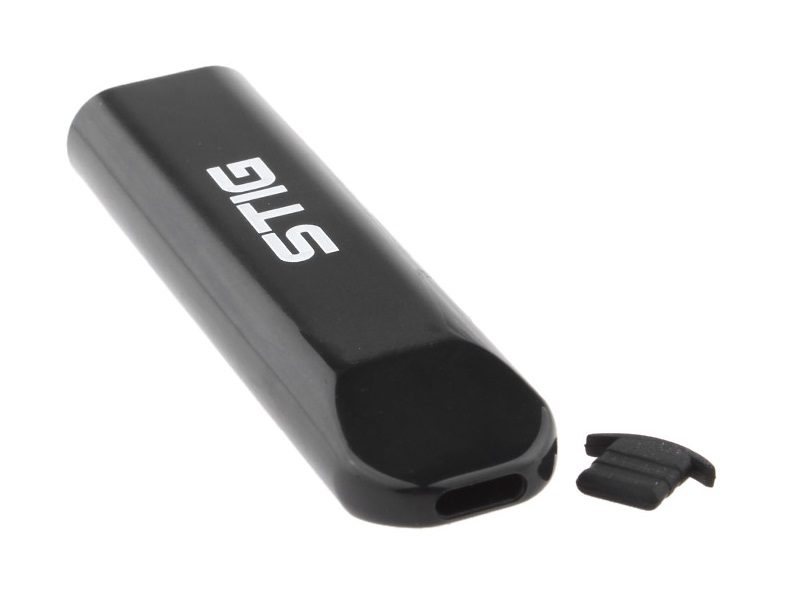 On the surface, the Stigs are all black in color. Each device features a different graphic on the shell, and one end is flat, which is the mouthpiece. And that is it for the outer part of the Stig.

The Design of the VGOD Stig

There is not much to the Stig. There is a small hole/airflow vent on the other end, where an LED lights up whenever the device is in use. VGOD says that the entire unit is disposable, but extracting the battery from inside means, it is possible to recharge it. Since these are meant as disposable units, there’s nothing to stop a vaper from exploring, or hacking, the Stig to see what makes it tick.

Conversely, they could have added a USB port to recharge the battery. Same for the “single-use” e-juice container, which can be refilled or at least have the juice extracted. The way that VGOD and Stig, managed to fit those two basic components into the narrow shell is impressive. 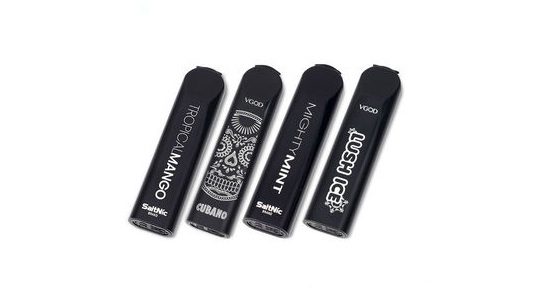 Looking at it, you understand the utility of having a disposable device. Instead of focusing on external elements like the build and durability, VGOD and Stig focused more on the e-juice quality and made the Stigs more for flavor and nic salt enthusiasts. The cell/pod are supposed to last for around 270 puffs, roughly, as the battery is rated for 250mAh.

The nicotine salt liquid formulation is high at 60mg. The high nic content also means that the Stig can last a little longer, as vapers will take a hit and be satisfied for quite a while. The duration of the battery may be enough to satisfy most MTL vapers with such a high concentration. And if the battery runs out, then, of course, you can just take another one out of the pack.

For a quick, unthinking fix of vapor, the Stig pods are ideal. There’s no filling the pods with liquid or charging or any buttons to press. It is just open and vape. The various e-liquids provide a tasty variety as well. Getting two packs of three could conceivably last a moderate vaper about a month, between the two of them.

A subtle, sweet-but-not-too-sweet fruit taste that goes heavy on the mango, while blending in some other tropical treats like pineapple. Vapers cannot choose their nicotine content, so all the flavors have the same, intense throat hit. With this flavor, though, it becomes milder and feels sweeter.

Menthol is a notoriously easy flavor to replicate, in the e-juice world, and this salt nic variation does not let down in the icy sting the vapor levels on the back of your throat. The taste is similar, but not as bad or chemical-y as a menthol cigarette, but there are not many notes other than mint detectable.

Although not in the title, the watermelon overtones of this pod come out as soon as the first puff of vapor is inhaled. The sweet and juicy flavors evident in the vape also give way to other tropical tastes like melon, as well as a biting, minty finish.

Cubano (Ku-bano, not Q-bano) surprises everyone with its decidedly strong, custard/cream taste profile that hits about as hard as a hand-rolled Cohiba. If this is supposed to be a blend of flavors like vanilla custard and tobacco, then it does the job, as the sweeter notes emerge more from the vapor than anything resembling tobacco flavor.

Mango + nicotine salts = Mango Bomb. The other Stig flavor with mango as its main draw, the difference between this one and the Tropical Mango option is a few notes of citrus, as well as menthol, for an explosive aftertaste.

The VGOD Stig Pod vs. the ePuffer XPod Mini vs. the Mojo Disposable Vape Pod

ePuffer XPod Mini come in packs of three. They can come in a single flavor, or in assorted flavors, of which there are three, Premium Tobacco, Cool Menthol, and Tropical Mango and are fully integrated, with the battery, pod, and outer shell individually wrapped. 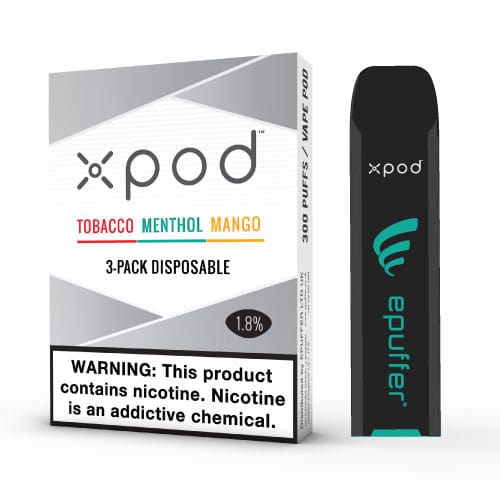 Each XPod contains 1.2ml of e-liquid, which has a 50/50 PG/VG ratio. The units are lightweight, coming in at only 12g and measuring only 3 inches long. The XPods are fully disposable and last for around 300 puffs per unit.

The Mojo disposable vape pods contain a special 50mg nicotine salt e-juice that comes in a fully-integrated unit. The other parts of the Mojo include a 240mAh battery and a 1.2ml pod that contains a 50/50 PG/VG ratio of e-juice. 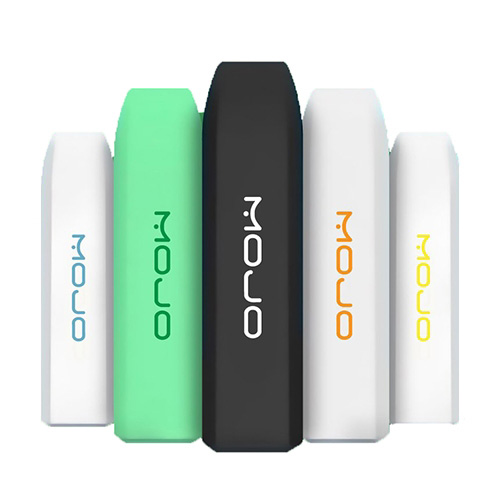 The device has no buttons and is draw-activated. The entire Mojo should last for about 250 puffs, and do not need refilling or recharging. The Mojo e-juice pods feature eight different flavors, from Classic Tobacco, to Lemon Dessert and Pineapple Ice.

Closing Thoughts on the VGOD Stig

The VGOD Stig is everything someone wants from a disposable pod device. It has great vapor quality, it is easy-to-use and very convenient. Their main feature has to be their convenience, but their vapor, and flavor quality are above-average as well. The nicotine content is higher than most other pre-filled pods, almost as high as the Juul, but unfortunately there is no option to vape a lower nicotine e-juice.

VGOD makes up for the high salt nic content by making five great flavors for the Stig. No two flavors are alike – even the two mango ones have subtle differences – and they also last for a good while, enough to give a satisfying hit, from beginning to end.