A Closer Look at the Hyppe Bar

The Bar Max is a pen-style disposable that is thicker and longer than most typical disposable vape pens. In addition, the Hyppe Bar vape has a semi-transparent. All-plastic tank/atomizer atop its frame that has a capacity of 8ml. The tank, however, is not refillable, and users cannot open it to refill the tank once it has emptied.

The vape tank also features the draw-activation trigger that gives users easy usability. There are no controls or power switches on the device, save for the airflow control switch on the bottom of the device that has a dial-like design. Users can turn the dial to increase or decrease the airflow into the atomizer. 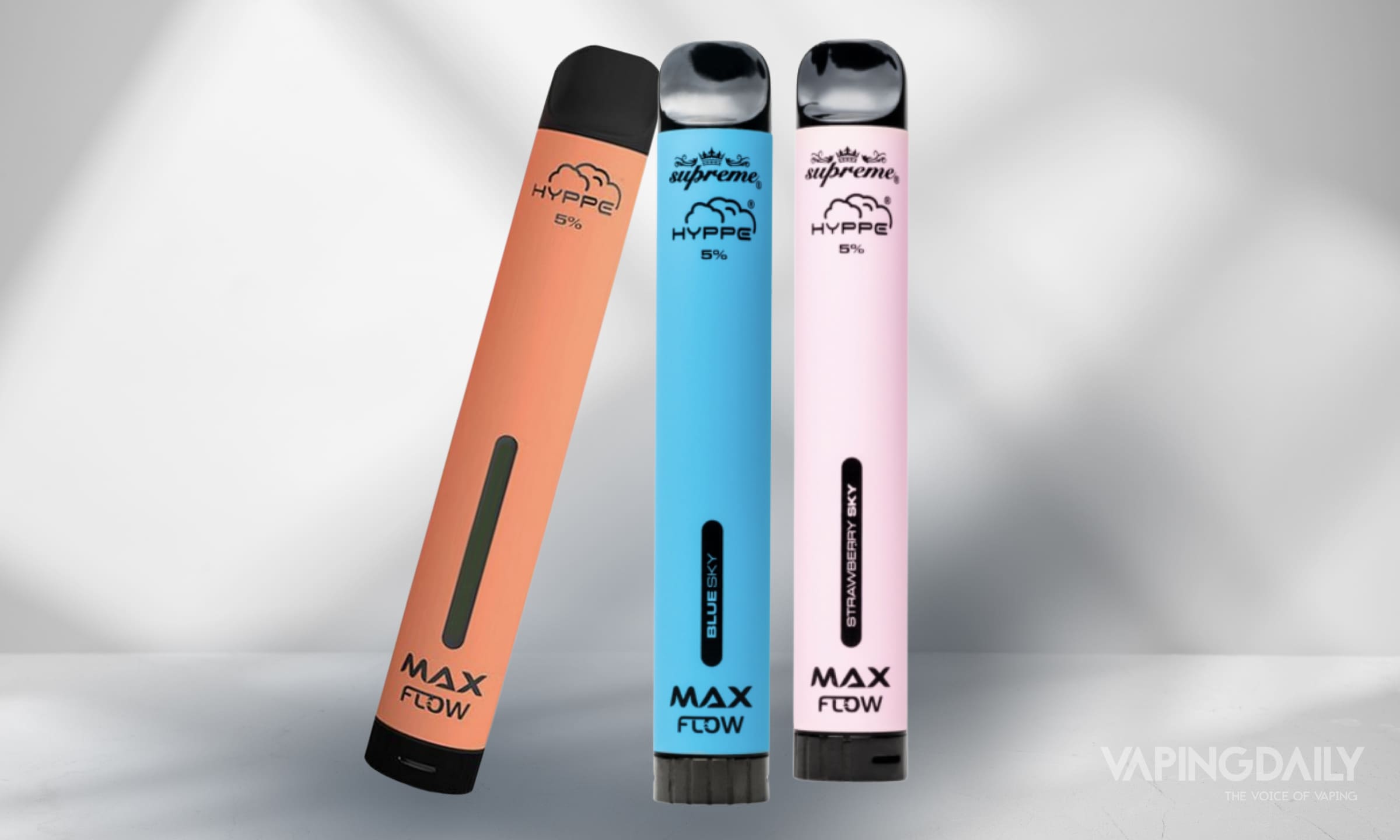 According to the manufacturer, the internal battery has a capacity of 1000mAh. The vape can last for up to 3000 puffs. The inner coil has a sub-ohm resistance to replicate the sub-ohm vapor production of a much larger device like a box mod. The battery, however, is not rechargeable, and the entire device is fully disposable. The tank is prefilled with a nicotine salt solution available in a single strength of 60mg with seven different flavor options. 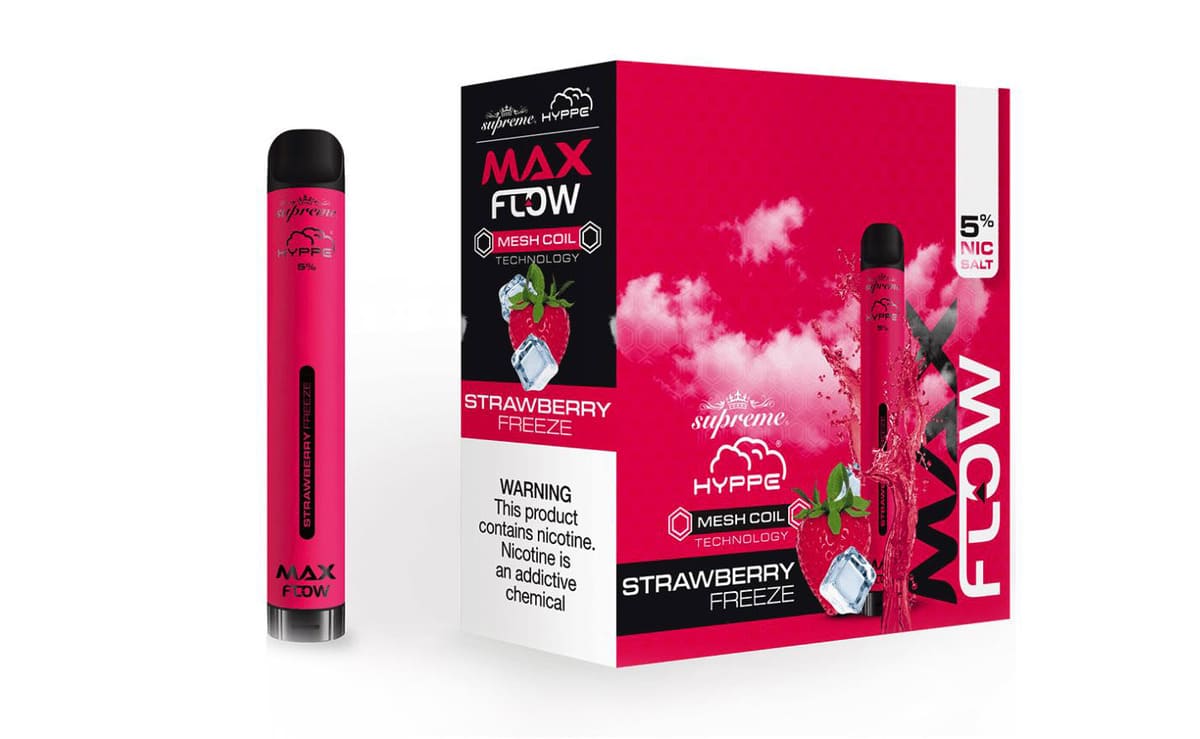 The Hyppe Bar Max is a self-contained device with no other parts or accessories. The unit comes as is and is ready to be used right out of the box.

The vape is all-plastic but still feels sturdy and durable. The all-plastic build gives the unit its compact and lightweight feel, perfect for on-the-go vaping. It is ideal for fitting into a pocket or purse without worrying about it leaking or coming apart. The tank itself is hard plastic and semi-transparent, so users can check their e-juice levels as they use the device.

The exterior of each pen matches the flavor of the juice inside. Therefore, they are all different depending on the flavor inside. There are seven different flavors, and seven different colors for each pen. The airflow dial on each pen is located at the bottom of the device. With each new setting, it moves around with ease and clicks in place, so it remains locked in.

The internal battery has a 1000mAh capacity. It is more than the average battery for a disposable vape. The battery is also responsible for the long-lasting battery life and a significant amount of puffs per unit that the Bar Max can deliver. The advertised duration of each Hyppe Bar is 3000 puffs. Again, it is much more than the average disposable.

The increased capacity of the liquid tank also makes this extraordinary puff length possible since it holds 8ml. It is even more significant than most standard sub-ohm tanks. The device has all the sub-ohm features, box mod like airflow control, extended battery life, and oversized e-juice capacity but has the convenience of draw-activation.

Tank and Getting It Started

There’s not much to say about the atomizer and using the device. It is draw-activated and has no buttons or controls. Every disposable device is user-friendly and intended to start working right away without charging or filling the tank. The device comes fully charged and ready to use, so users do not have to charge it. There are no USB charging ports anywhere on the device. Once the battery runs out (or the e-juice), the device can be disposed of. 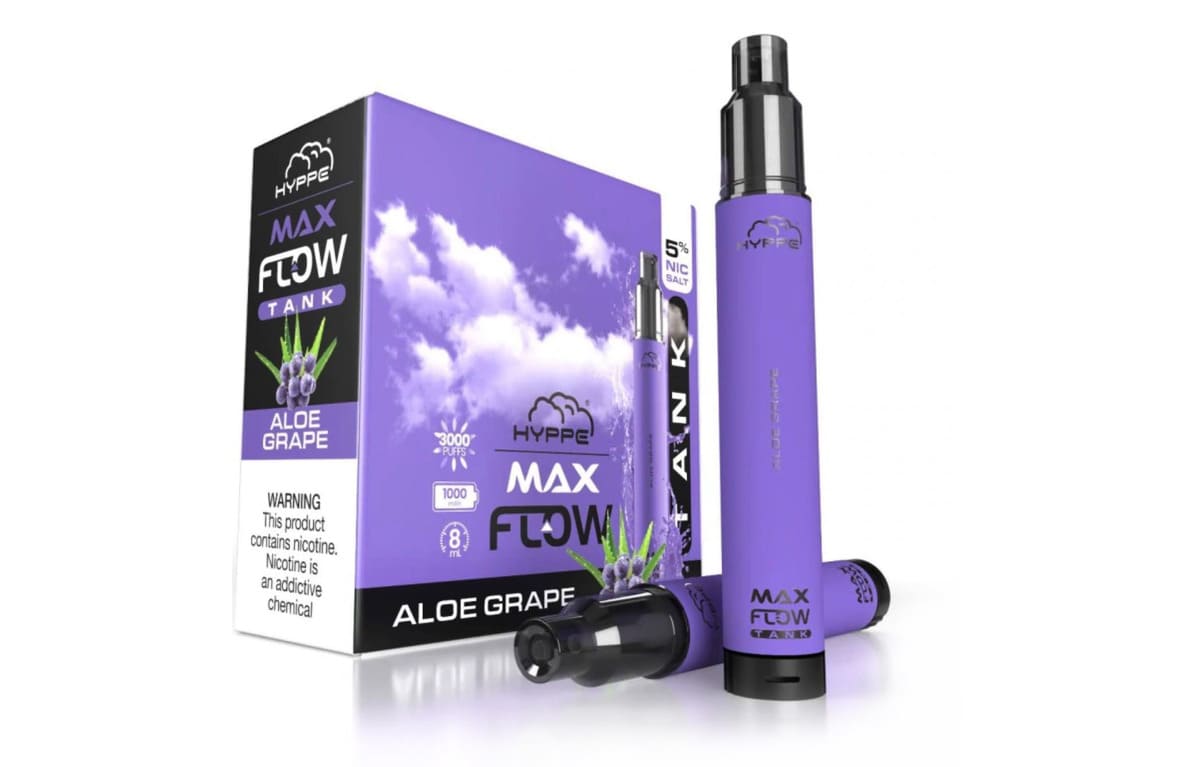 The tank is also not refillable and has no openings or fill port. Therefore, users should not attempt to fill the tank via the opening in the mouthpiece. That would clog the airflow and prevent the unit from functioning correctly. Rather than risk damaging the unit, users would be better off buying a new disposable. 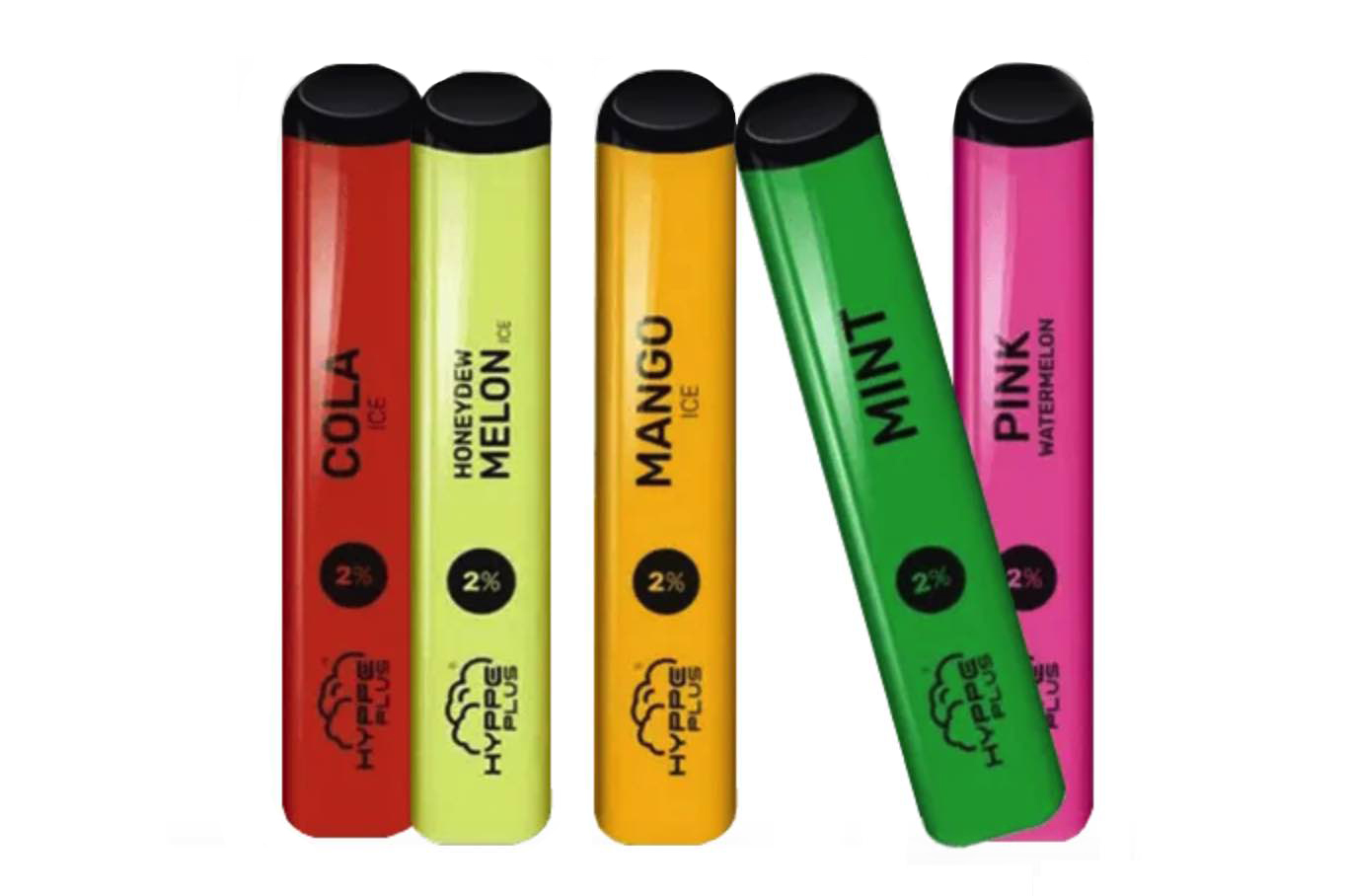 The Hyppe Plus is a sister product to the Bar Max. It has a more petite frame and lessened e-juice and battery capacity. The Plus is a pod device featuring a 1.6ml capacity pod prefilled with a 20mg nicotine salt solution. The device is also available in many more flavors than the Bar Max. The Plus comes in over thirteen flavors that range from Mango Ice to Cola Ice and Virginia Tobacco. 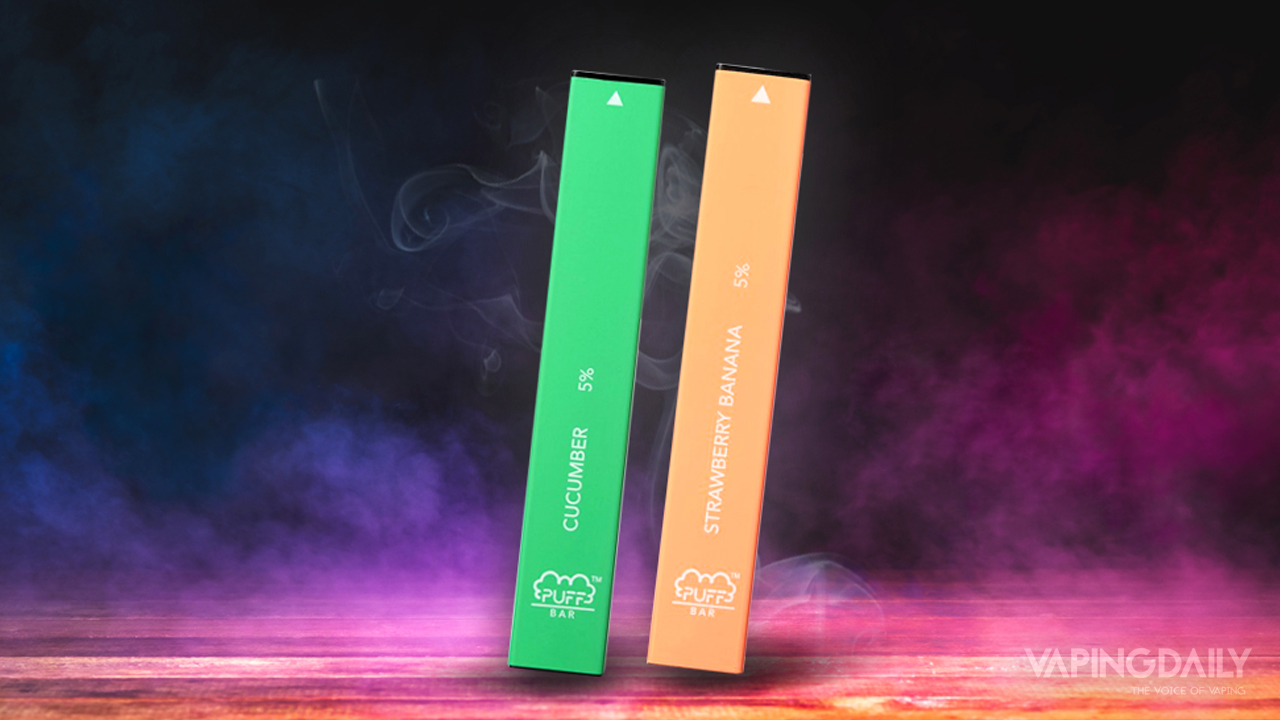 Puff Bars are fully disposable e-cigarettes that come prefilled with a nicotine salt solution. They are available in several flavors. The device itself is tiny and compact, and draw-activated. There are four different versions of the Puff Bars. It ranges from the primary option (400 puffs) to the Puff Bar Max (3500 puffs). Each version has a set amount of flavors and a unique design, with the longest-lasting Puff Bar having a slightly larger 1100mAh battery.

Have you ever used a disposable device? Do you think they should last as long as some regular vapes? Do you like that they can last for 3000 puffs sometimes? Let us know your thoughts in the comments section below.

The new Hyppe Bar Max is a long-lasting disposable with the excellent vapor production. It lets users customize their vaping experience with the adjustable airflow dial. The design is user-friendly and lets users start using the device immediately with any setup or maintenance. The unit is unique in its design. However, competing devices have similar specifications and performance. But the Hyppe Bar Max is equal to any similar device in its style and substance.