This vape is a disposable device with a powerful battery and high puff count, as well as several excellent ice flavors, not to mention a few regular ones. It is the ideal product for people who want a slightly higher puff count than a Juul.

The Mr. Vapor Glow has a lot of good stuff going for it. It is not the most powerful vape out there, but it still gives off 650 puffs, which is significantly higher than Juul and a few other devices. The advantage is that the user will not get stuck with a vape that lasts several thousand hits and takes forever to deplete.

Another thing to like is that the manufacturer makes it easy to detect fakes. Each of these devices comes with a unique code that can be checked to ensure it is a genuine product.

This is one of the best features when considering how many copies are out there.

This is a disposable device that uses salt nicotine and a high resistance coil. It is not going to produce a significant amount of clouds. Disposable vapes are for people who want a quick and convenient way to get a nicotine fix.

Anyone reading this who wants something that produces high amounts of clouds should buy a box mod with a tank that supports sub-ohm coils. 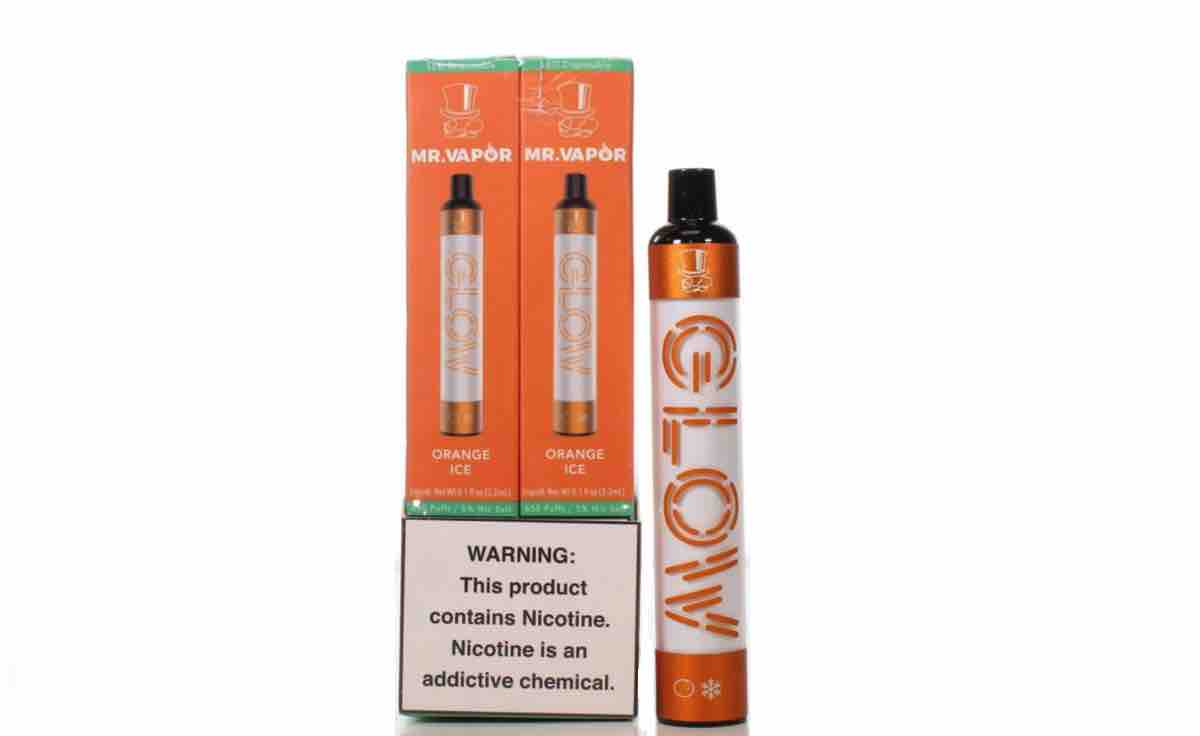 This is not a starter kit. The box comes with a single disposable device and directions. Someone who wants a starter kit complete with a mod, tank, and coils should buy a box or box mod.

The design is pretty good, except for the branding. It has “glow” written on it in giant letters. People who do not like branding should find another disposable vape.

However, those who can get past this will be satisfied. It has a rounded body that makes it comfortable to hold and transport, and it has a comfortable drip tip style mouthpiece.

People who like ice flavors are going to want these devices. They have almost nothing but ice flavors.

There is too much “ice.” They should have included more regular flavors in addition to fruit punch and cotton candy. A good start would have been providing non-ice alternatives for each of their ice flavors.

Another problem is their failure to include a tobacco or coffee-flavored vape. Other than that, the flavor quality is very high, which is especially true of Cola Ice.

Cola Ice does an excellent job of mimicking the taste of Coca-Cola, Pepsi, and similar soft drinks. The icy sensation makes this liquid very convincing. Combining cola and ice was an excellent idea, and whoever came up with it deserves a lot of credit.

This disposable uses a 400 mAh battery which is good for 650 puffs. As earlier stated, the puff count is not as high as other devices, but the advantage is that users will not throw it out before it is halfway depleted.

How to Use the Glow Disposable Vape

This device is disposable, and these are the easiest to use of any vape. All the user has to do is inhale on the mouthpiece, and it automatically turns on. Once the device is depleted, throw it away.

Vapor Glow Vape vs. Breeze Plus

There is not much else to say about this disposable vape. It does its job by relieving nicotine cravings, and it has some excellent flavors.

The only issue here is that they have too many ice flavors and not enough regular options. It would be better if their flavor selection were more balanced. Also, they do not have any tobacco or coffee flavors.

Those are two flavors that too many companies overlook. Every manufacturer that makes disposable vapes should have at least one tobacco and one coffee flavored vape.

Other than that, this is a good product that does its job. If you use these devices and want to chime in, we would like you to leave a comment below. Please tell us what your favorite flavor is and whether you like this vape.