The new Wismec Active functions as both a Bluetooth speaker and a high-quality box mod. By reaching up to 80W, it vaporizes e-liquids rapidly for impatient vapers. Plus, its 2100 mAh battery lasts for several sessions without having to be recharged. This box mod comes in a few fun colors and consists of durable material. It is relatively small and lightweight, making it easy to bring on the go. Read this review to see if the new Wismec Active lives up to its hype. 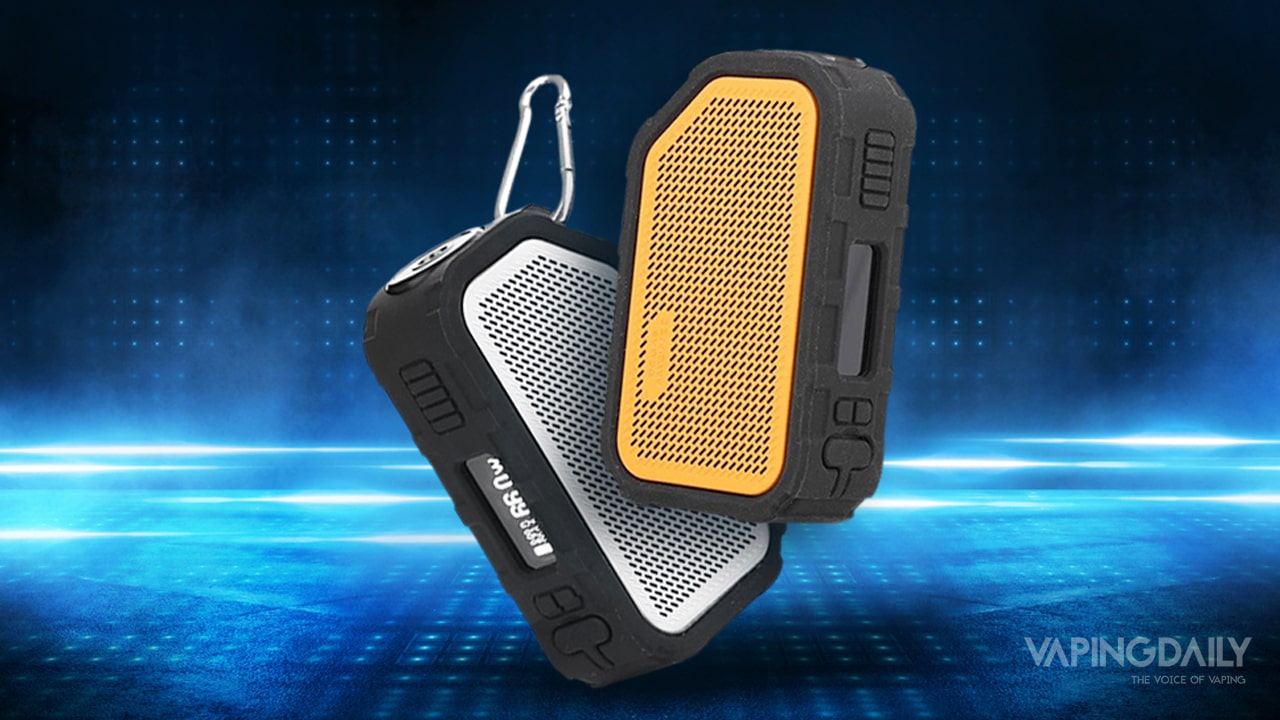 This new 80W starter kit gets a gold star for its premium packaging and aesthetic. It comes in a slim and re-usable box. Each separate feature is nicely packaged within its box to avoid damage or tangling. Included in the purchase of the Wismec Active is the mod itself, an ergonomic hook, a 0.2 sub-ohm WS01 triple coil, a 1.3ohm WS04 MTL coil, an Armor NS plus tank, and a bag of spare parts. Plus, vapers will also get a micro-USB charging cable and two user manuals. Setting up the mod is fairly self-explanatory. However, the user manual is easy to understand for first-time vapers or vapers who like to practice extra caution with their devices.

This device can be purchased in several different colors. For traditional vapers, there is a sleek solid black option, as well as a stainless steel option. For vapers looking for a bit more color, the starter kit also comes in blue, red, purple, green, and orange. There is a color that suits every preference and personality. The mod itself takes the form of a rectangular box with rounded edges. One of the top corners features a loop that can be used to clip and hang the mod with its included hook. Some ideas as to where to hang it include on a toolbox, belt loop, backpack, or purse.

One of the most important features of the Wismec Active 80w is its double function– being a speaker. The speaker is Bluetooth enabled so it can play music without getting hooked up to wires. A great benefit of this is that the mod looks more like a Bluetooth speaker than a vaping device.

This makes the device inconspicuous and virtually unidentifiable as a vape. It can be hooked on to and carried around on the outside of things such as purses or pockets without anyone knowing what it can do. 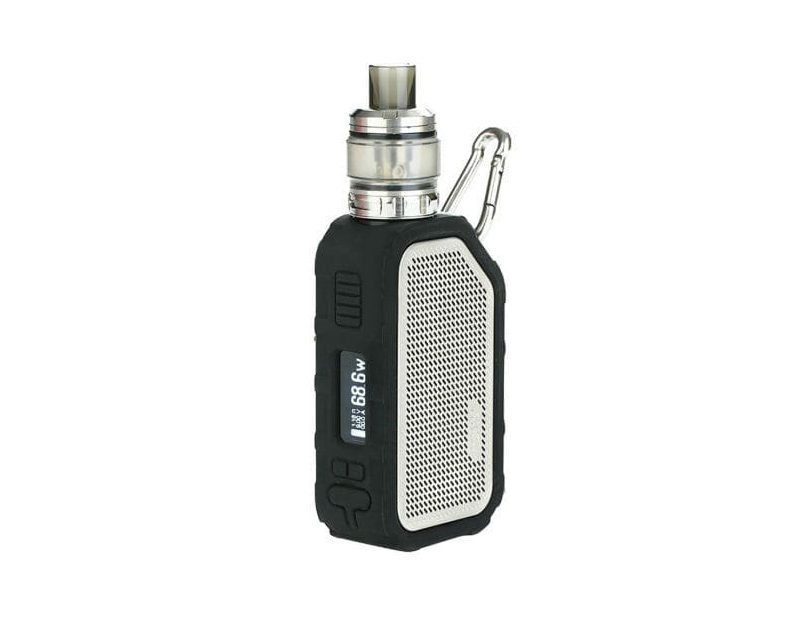 Its ability to perform as a Bluetooth speaker is also stupendous. Its sound gets loud while still staying clear. The 80W Wismec Active is also waterproof with its silicone casing, which keeps it safe while outdoors! This box mod is perfect whether it is being used to play music at work or hanging out by a lake. Then, when it is time for a vape session, it is ready to go!

The vape itself is 94.5mm (3.7 inches) by 55.6mm (2.2 inches) by 26.6mm (1.04 inches). It is also relatively lightweight, weighing in at 166.4g. The Wismec Active’s body is made out of a sturdy zinc-alloy and supports Ni200, titanium, and stainless steel. On the outside of its surface is a 0.91″ O-LED screen that makes playing with settings and modes easy for its user. Additionally, the same silicone casing that makes the Wismec Active waterproof also makes it shockproof! This silicone casing can be purchased in different colors that match or contrast the unit itself.

The vape tank on this unit is 27mm (1.06 inches) in diameter and weighs 47.5 grams. It is constructed of stainless steel, and its glass has Pyrex reinforcement. It holds 2 mL of e-liquid, which is pretty average. However, in expansion, it can reach up to 4.5 mL. When the tank is empty, it can be refilled via a sliding top-fill method that is mess-free to use.

As previously mentioned in this review, the Wismec Active 80w comes with a 2100 mAh battery that can be recharged. The battery’s life will obviously depend on the vaping habits of the user. However, a moderate vaper should be able to go a full day without recharging. By decreasing the power and length of sessions, vapers can make their battery last an entire workday. While there are other box mods on the market with longer lasting batteries, they are typically priced much higher. 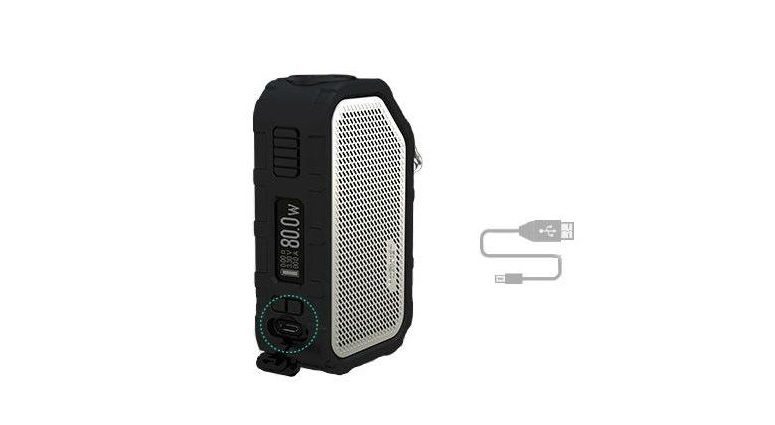 The 80W Wismec Active has several different features that make it stand out in the vape market. To begin, there are five different modes on the device.

The vape is activated via an intuitive and tactile button on its exterior. There also two adjustment buttons on the unit’s surface– one that increases settings and one that decreases them. The standard 510 connection in the Wismec Active is durable and reliable. The Wismec Active Kit also has a dual slotted adjustable airflow ring to better control hits.

Similar Units on the Market

The Tesla Punk Mini Kit is typically more expensive than the 80W Wismec Active, but can usually be found somewhere on sale for a similar price. It can reach 85W, which is 5W more, but this difference is honestly not too noticeable.

It has the same temperature range of 200 to 600°F. A huge pitfall of this unit is that like many mods it does not come with its 18650 battery included.

GeekVape’s Aegis Mini starter kit comes for a very similar price as the Wismec Active. Other things it has in common with the Active are that it also reached up to 80W and its 200 to 600°F temperature range.

This unit’s tank is actually able to be expanded to 5.5 mL, and it has a 18650 mAh battery. Unfortunately, though, it is only compatible with sub-ohm vaping, and cannot perform ohm vaping.

Of all of the box mod starter kits on the market, the Wismec Active is definitely one of the best. It is great for beginner vapers because if they do not like it as a vape, they can still use it as a speaker! Plus, its user manual is easy to use. There are plenty of settings to fiddle around with. These settings make the vaping experience highly customizable.

Ultimately, the Wismec Active 80W will be unique from the rest of the mods for each vaper. They get to choose everything from the colors of the silicone casing and unit down to the temperature and wattage of the mod. The battery life on this unit may not be fit for an extremely heavy user. However, it is perfect for moderate and light vapers. It can last them a full day of vaping and Bluetooth tunes.

The 80W Wismec Active is the perfect box mod for on the go usage thanks to its durable zinc-alloy build. It is also easy to carry around with its included hook. Vapers can throw it on their bag or in their pocket and forget it’s even there. Plus, its design, while chic, is inconspicuous. Parents, friends, and coworkers would never know it was a vape unless they were told. The Wismec Active box mod is extremely special in part because it has both ohm and sub-ohm vaping capabilities. A bonus of buying the device’s kit is that users get the two different types of coils needed for these experiences.

Another bonus of the kit is that vapers get a compatible 2 mL tank. This tank, as previously mentioned, can expand up to 4.5 mL. The tank has glass and is as durable as the rest of the unit thanks to its Pyrex reinforcements. All in all, this 80W unit is perfect for beginners and serious vape gods alike. At such a value price, this device stands out from the rest of the mods. It has an elegant, functional aesthetic and produces high-quality output. It will make for a great buy! 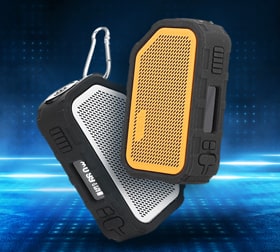