Wellon Transformer Vape, from a new company called Wellon, is a gleaming entry into the box mod market that comes in at a lower price than usual for a nearly 70W device. The Transformer stands taller than most, and that’s because it features a double-decker tank system the stretches to over 80mm with the tank attached to the mod.

The mod itself, made of a zinc alloy and featuring hard edges for an easier to grip device. Wellon Transformer Vape features a 18650 battery with a bottom USB charging port and an OLED screen that displays your basic temperature settings, variable wattage, and TC levels.

The tank that comes with this mod has some exciting features in and of itself. It has a 4 ml capacity, so it’s twice the size of most TPD compliant tanks, but it doesn’t use all that extra space just for e-juice.

The tank is two parts in one. The top section features the mouthpiece, top cap, and the glass tank that connects to the bottom section with a steel collar that also has several airflow vents. The coil (of which two are included in your kit) gets screwed into the bottom of this steel connector and is then attached to the 510 atomizer base, which is also covered by a glass tube. 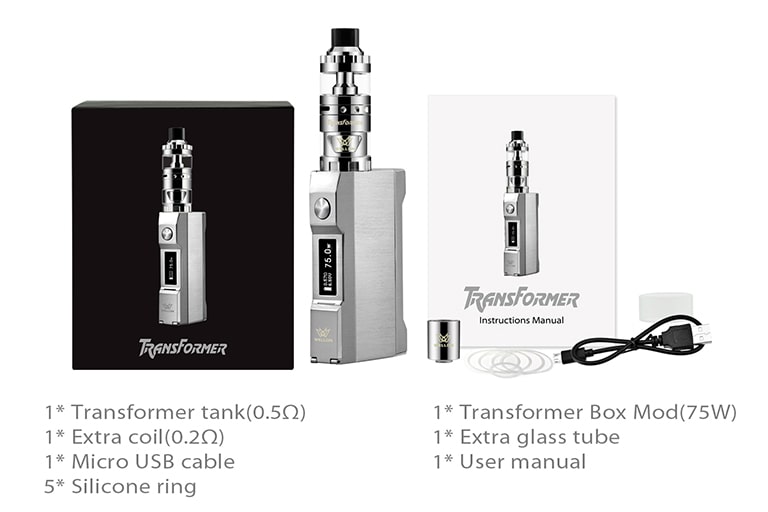 Here is what you’ll find included in your Wellon Transformer Vape package: 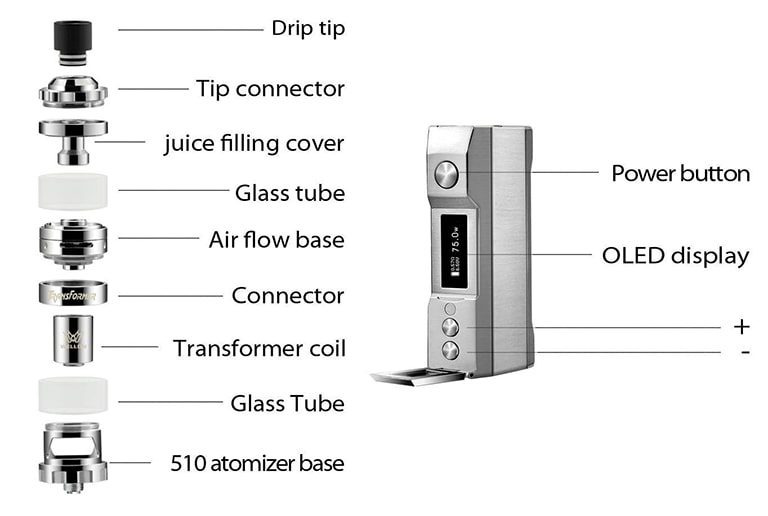 Right out of the box the Wellon Transformer Vape seems like a simple enough device. The mod by itself was easy to grip and had an easy to grip feel. The tank comes packaged apart, and before I screwed it onto the standard, spring-loaded 510 threading, I took it apart just to see how many pieces it contains.

The tank and all its components looked very well-built. The drip tip was made of silicone, and it was not precisely wide-bore, but it was wide enough to provide a great mouth-to-lung or direct lung hit. The rest of the other pieces screwed off easily enough.

I took a look at the coil that comes pre-installed, and it appears to use dual coils made out of nichrome, which I’m not sure where that fits in with the nickel, titanium, and stainless steel coil resistance settings, but I think that’ll be a problem resolved with testing it.

There are two main airflow valves throughout the entire tank apparatus. The main valves are found in the center connector ring that connects the two distinct parts of the tank. The coils on the bottom section of the tank are quite wide and take up most of the space in the tank.

Air is supposed to come in through the side airflow valves, go down into the coil chamber and then come back up through the vapor path. So that’s a long way for the air to travel and I was curious to see if that affected vapor production and flavor. The vapor path itself is made of stainless steel, so nothing to worry about there.

Taking a look at the rest of the mod, it features one prominent power/firing button and an OLED display right underneath. The battery is installed in the side section of the mod that comes off rather easily and is then you can effortlessly pull it back with the help of four magnets.

The selector buttons for the screen are located behind a flip-down panel right underneath the screen, and after that mystery is solved the operation and functioning of the mod are rather straightforward.

The Wellon Transformer Vape was, thankfully, more comfortable than most new box mods to operate. I was grateful for the simple setup and user-friendly interface of the Transformer after the cornucopia of confusion brought on by the SMOK ProColor.

After a charge time of about two hours, you click the power button fives times to turn it on. To toggle in between the different settings, you hold down the two selectors buttons to move between the settings.

Again, there aren’t any fancy bells or whistles on the Wellon Transformer Vape, in terms of customization, which is something I appreciated. You can set your temperature control by selecting a pre-set temperature and then switch the device to whatever coils your atomizer is using.

And that’s pretty much it. There are some safety features like short-circuit protection and overheating protection, but once you have your presets installed, you are ready to vape. 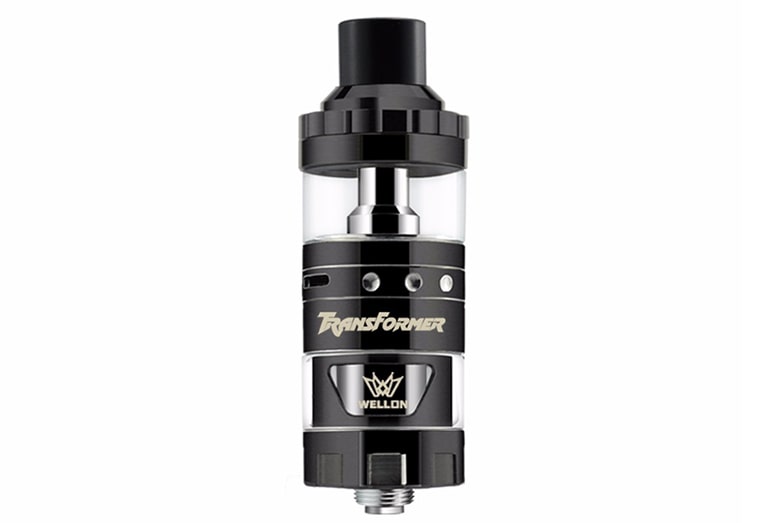 I didn’t have much of a problem loading the tank on the Wellon Transformer Vape. The drip tip comes off, and you unscrew the top cap to access to two fill ports on either side of the chimney, which were broad enough to allow for easy filling. The e-juice sits in the upper portion of the tank, but it also flows down to the lower part of the tank since that is where the coils are located.

So with a 4 ml capacity and so many airflow valves you would think that the tank has a high potential to leak. I know that’s what I thought. But, surprisingly enough, just as advertised, I had zero leakage, even when I set down the device on its side.

Vapor Clouds – Were They Big?

I took it upon myself to reawaken the memories of my childhood and use the Copious Crunch e-juice from Simply, which has a high VG content at nearly 85% and is marketed as the “ultimate fruity, breakfast cereal blend.” And since the Transformers was my favorite Saturday morning cartoon, I thought it a fitting combination.

As I said, the Wellon Transformer Vape was not a hassle to fill at all. I set my max temperature at 400F (temperature range on the Transformer is 200F-600F) and started off at close to 35W. And I was immediately impressed by both the cloud production and vapor flavor. I felt like I was drinking the sugar-soaked milk of my Saturday morning cereal bowl.

I did push the wattage a little higher, subsequently, and the device fired super quick, while still maintaining excellent flavor and copious cloud. I haven’t yet tried the other sub-ohm coil included with the kit, but I imagine that with the level of control you have over the mod, it wouldn’t disappoint either.

The Wellon Transformer Vape review made feel that this box mod was a great introduction to what Wellon can do. It was an easy-to-use device made of quality materials and a perfect beginner’s model for sub-ohm vaping. There was no trade-off between vapor production and flavor quality. Upping the wattage produced great clouds that had the same consistent taste like all the previous vapes.