I was super excited to be able to check out the Vaporesso Revenger 220W Starter Kit. I like Vaporesso a lot they seem like a company that really cares about how they market themselves in the vaping community – at least with how much time they spend on the packaging there devices.

A quick heads up on the Revenger, however, is that it is fantastic and you will love it; it is powerful, sleek and just drops dead gorgeous. I mean with 220W, this thing blasts.

Digging into the Revengers Box

Some may say looks aren’t everything and for many that may be true, but when you are trying to sell a beautiful powerhouse like the 220W Revenger, you are going to wanna meld it with a pretty nice box. Luckily, Vaporesso nailed it on this one, the box itself has a modern niche to it with a side slide out insert – which is white. When you flip the box open like a book, you are greeted by “BE AMAZED” which I really was hoping to be, and sure enough was when I flipped the last cover or flappy insert exposing the device.

Neatly packaged on the left flap, however, with the USB logo is where they keep the, you guessed it the USB charging cable, user manuals, warranty cards and all the other papers. Moving back to the right, again after removing the flap, the device itself is neatly packaged almost looking like a phone. Next to it is the NRG Sub-Ohm tank with the pre-installed NRG4 GT Coil. Under that, is the spare glass tube or replacement if you manage somehow to break the existing one, which we surprisingly have not broken yet (yes I may have dropped it). Finally under that is the replacement NRG8 Coil.

The Revenger Comes with 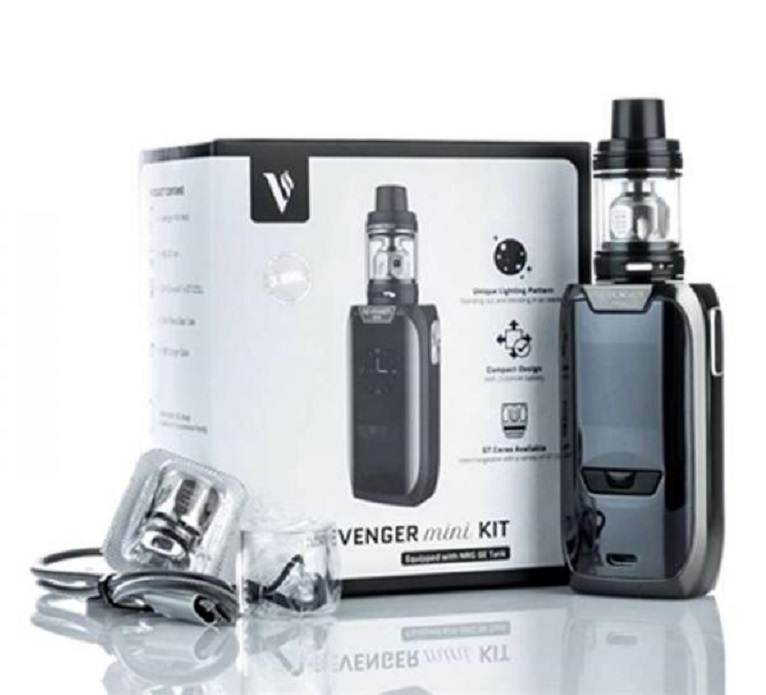 First Impression of the Vaporesso Revenger

As mentioned previously, the unboxing experience was quite lovely, and a bit of a surprise to have something packaged so nicely. Most of the time we expect just bare minimal effort when it comes to such things. When companies take the time to do it right, it adds the premium feel of the device. As a more flashy vaper, I like to have nice mods and nice tanks, with Vaporesso’s creation I can feel sassy and confident while holding something so modern.

I mean just holding the device or looking at it, I’d have to say I was impressed with the big flashy OLED control screen and easy to use buttons and a convenient USB port all on the front for easy access. Overall looking at the device with a whole, meaning with the tank on makes this thing feel super solid.

The smooth edges, rolling front screen, and a clicky side fire button offer quite the ergonomic and modern feel that probably a lot of people and I will find it a nice touch. It almost looks like a new smart gadget like a phone or smartwatch, so it can easily fit into that market. The designers of the product really took convenience into account like as I mentioned the USB Charging port is on the front so you can stand the device up while charging leaving your tank on and not having to worry about spillages. Also, to access the battery you pop off the front which is held on by magnets, unfortunately, the required 18650’s are not included.

The size is really nice, it fits in hand with no problems and is quite comfy. The weight is not too bad, like holding a modern curved edged phone with around the same weight. The feel was great as I just mentioned, Like a phone but a bit bulkier and compact. Overall easy to hold, not too heavy.

Moving on to the NRG Tank it is quite massive as it holds about 5ml of e-liquid and at 26.5mm in diameter. The top of the tank sports an easy top fill design and an interesting splash guard mesh which covers the inside of the drip tip which in itself is massive. The drip tip is removable I was free to use one of our own with the supplied adapter. Lastly, on the bottom, there are two adjustable airflow slits that allow for optimal control.

The tank felt sturdy and solid and got through the test without a hiccup.

To turn the mod on you have to click the fire button five times. Holding down the mode button and the plus button at the same time it puts the device into system lock while holding it down again unlocks it. When the system is locked, you can still fire the Vaporesso Revenger 220W. You just won’t be able to adjust things. Holding down the plus and minus buttons flips the screen. Mode button and fire button gives you the mods serial number.

On the top left, there are details about battery levels, and top right is what mode you’re in. Underneath the battery icons tells you which strength mode yours in (Low, Normal, High). Right of that is the Voltage and Resistance values. Center of it all and the largest of all the info is the wattage level, with a timer bar just under that.

Wouldn’t be a mod if you couldn’t adjust it, pressing the plus or minus button ounces changes the wattage up or down one notch in between 5 and 220W, holding it down zips it through 10-20 at a time.

The OMNI board is a smart board that is installed on the Revenger controls everything and has memory installed to keep your settings, throwing a tank on should detect the type of coil and help pre-setup what you need. However, I must say that if you are a new vaper all these controls may be a bit daunting as knowing what needs to be done here can be complicated.

Pushing mode three times brings up VW (Variable Wattage) and CCW (Custom Curve Wattage). Clicking on CCW brings up a bar graph display where you can individually select a custom power curve. Switching back to TW is just another simple three clicks in and a selection to TW.

In temperature control, there is VT (Variable Temperature), CCT (Custom Curve Temperature) and TCR (Temperature Coefficient of Resistance). CCT again lets you set a custom curve for temperature, so I was able to select the best ramp up that worked the best for me.

For TCR it allows you to set the levels for that, and, in the manual, they give instructions how to do it for each type of metal coils.

System Set allows you to change all types of settings from VM mode, VT mode, set the time, default out the device and change the screen timeout.

Issues With Some Devices

The Beta firmware of the Revenger had some problems with low battery, but if you are getting a newer device, you should not have to worry. Also to note, some devices also came shipped with the device set in High mode this has been fixed, and again newer devices should be set correctly.

Taking the Revenger out for a Spin

The Revenger just gives it where it is needed, and it does what you expect it to with the 0.15-ohm coils from the GT4 and GT8 we did not have any trouble vaping at the temps and setting I wanted.

Smart wattage with airflow completely open put me a 60W it gave decent clouds and okay flavor. Closing the airflow a bit seems to help and bumping it up to around 70W was helpful for me.

Bumping it up to about 110W ( the limit for the coil) and opening the airflow all that way was apparently too much it muted the flavor completely, surprisingly though it was not a dry hit so you will be able to cape at these wattages.

Vaporesso’s jump into the high-wattage market may be a successful one if they can keep in the direction they are going, tweaking a few things to make it better like adding a better tank for starters or working on making the system controls a bit more user-friendly for new vapers.

I do not think the Revenger is something revolutionary; however, I do think it is a good step for Vaporesso to take, it does what it advertises, and with up to 220W of power you will not have a hard time powering any tank or coil that you could imagine.

If you are looking for an entry starter kit, you should give this device a look over. It is worth your time.

3 comments on “Vaporesso Revenger 220W Kit Review: A Powerhouse in a Unique Package”