I feel like I’ve been changed irrevocably after reviewing my first mechanical mod. I feel like Dorothy landing in Oz and discovering beautiful, vibrant colors for the first time. I feel like I can’t go back. I feel like I don’t want to go back. But, duty calls.

From the company that sometimes just tries too hard to impress, SMOKTech, we have the new SMOK X Cube II, a box mod that features a 160W power output, Bluetooth compatibility, over one hundred different settings. Apart from their phenomenal Big Baby Tank and their G-Priv, I have yet to be completely wowed by SMOK.

Maybe it’s the fact that after reviewing mods with touchscreens and a mech mod, these run-of-the-mill box mods don’t do anything for me anymore. But either way, this SMOK mod also features an OLED screen (yawn), a spring-loaded 510 connector (double yawn), a customizable LED light that lines the firing bar (that’s a little better) and the standard temperature, resistance and variable wattage control.

In the Box You’ll Find

Here’s what you’ll find in your Cube II box:

So, more paper than anything else. No tank comes with the mod, but that didn’t bother me; it gives you more possibilities for personalization.

The SMOK X Cube II – the Maths of Good Vaping

The Cube II is a big boy. The Cube II doesn’t exactly have a “cube” shape; it’s a bit more elongated given the entire side panel of the mod is the trigger, so when you are holding the mod you just squeeze to fire the device.

That wasn’t a terrible idea, but I didn’t like it because it made the device too easy to fire. The other thing I wasn’t too thrilled about was the battery door, which is supposed to be held in place with magnets (magnets!) but I found that it came off very easily, just by holding the mod in my hand.

The OLED display screen was quite small and jam-packed with a lot of readouts, and when you attach an atomizer, it becomes even harder to read. The mod itself is made from stainless steel and zinc and comes in at a whopping 230g, and that doesn’t count the two 18650 batteries it takes to power the device, so it’s a stay-at-home type of device.

The mod can be paired with your phone through a Bluetooth connection and through an app you have to download, which costs $3. The app doesn’t let you do anything that you can’t go through the interface on the mod, except for adjusting the temperature coefficient rate, so the app is yet another monument to tedium and uselessness.

Only, if you don’t want to use the mod’s interface, or you think it’s too small to read or the buttons are hard to access with your tank on, the app does come in handy. But then again, the mod shouldn’t be designed in such a way that you need a separate application to use it – I’m just saying. 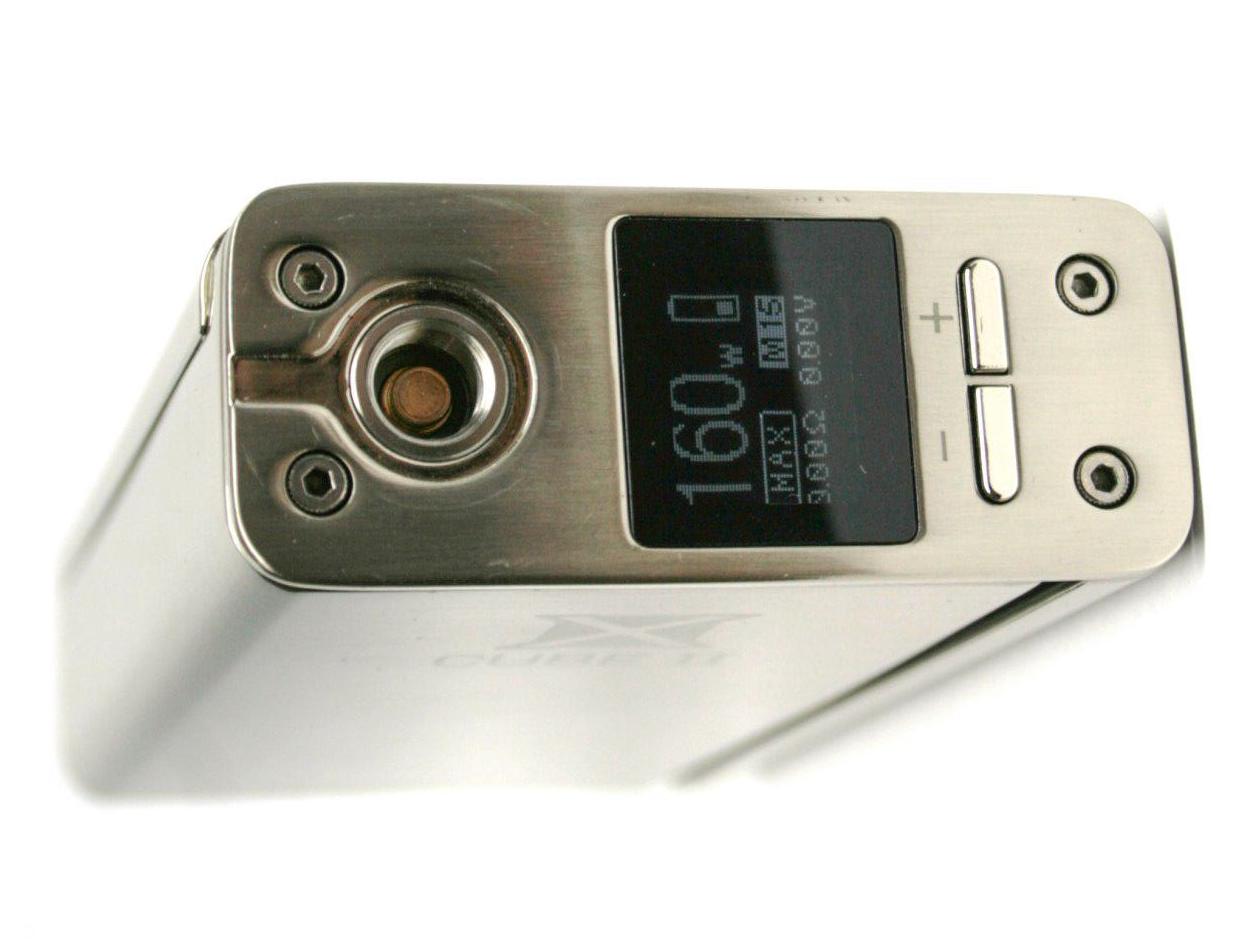 Getting Used to the Cube II

The Cube II has an overabundance of features and settings that you can control. The OLED display offers five distinct menus that range from the modes menu to the Bluetooth menu and the puff counter and the LED control.

You use the firing bar to access all the menus and the plus/minus buttons to adjust the settings, so the excess use of the bar might lead to problems down the road with its functionality. There are over 100 different memory settings that you can input into the device to keep your settings the way you like it, which again, seems like overkill.

Something like the JoyeTech Cuboid had an easier to use touchscreen that wasn’t so difficult to navigate (eventually), and even that didn’t need to overcompensate by offering a hundred different memory settings.

And using the Cube II has its problems. When I flipped over the screen I found that the buttons did not flip accordingly, so I had to use the up button to move down and the down button to move up like I was in the Upside Down from Stranger Things.

The mod can be used in several different wire modes from Nickel 200, stainless steel and titanium. These settings you will have to adjust depending on the RDA or atomizer you are using. I decided to go with the recommended attachment of a TFV 4 and a stainless steel coil.

I’ve heard some other people write about how their menus froze whenever they attached a new atomizer to the mod. Fortunately, that didn’t happen to me, but I don’t rule it out as a possibility in the future.

With an atomizer attached you just need to click the firing bar five times to turn the device on, but within the menus, you also have a power option that lets you turn the device on or off. The mod can also be locked, so it doesn’t misfire on you.

When the device is on, you can access the menus by clicking the firing bar three times, which will take you to the main menu. You can then use the plus/minus buttons to scroll through the different menus.

I had some Velare Luxury e-juice lying around, so I poured some into the TFV tank and attached it to the mod. I kept the temperature at a decent 520F and put my power levels at 95W. I didn’t play with the resistance of my coils that much since I had the stainless steel coils and the temperature control was already set.

The mod vaped well enough, but getting to that point was so bothersome and annoying that I couldn’t focus on anything other than the poor functionality and glitches on the mod. The cloud and taste of my vapor were on par with the settings, the coils and the power output. 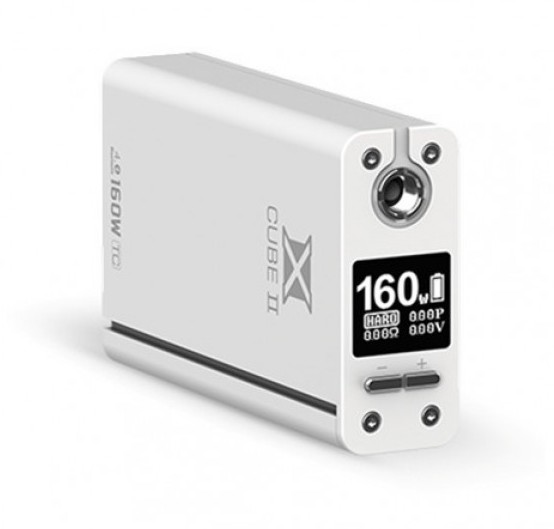 What It’s Got and What It Doesn’t

The Cube II with all its problems and glitches doesn’t stand much of a chance against any other comparable mod. Even so, I decided to see how the Sigelei 150W touchscreen mod could hold up against the Cube II. The Cube II is already at a disadvantage for the apparent reason that it lacks a touchscreen.

The Cube II is only slightly more powerful, but not by so much. The Sigelei didn’t have the same defects and difficulty of use as the Cube II, such as a battery door that comes off at the slightest touch. Comparing the performance and vapor production of both models, I found very little to distinguish them.

The Cube does have more control and features that let you customize your vape (albeit not easily) and does go down further regarding sub-ohm vaping, so it that sense it does ultimately give you a more customizable vape. So, for that quality (and only for that class) the Cube II pulls a surprising upset.

Not the Best Parts

The Cube II is massive. Alone the device weighs a lot, and when you put in the two 18650 batteries and I don’t know why this mod has to be so big. It’s clunky and does not transport easily, so forget about taking it with you anywhere.

I’m not sure if SMOK has done some updates to the Cube II, which is already supposed to be an update on the Cube, but there are some serious problems with the device that were essentially deal-breakers for me.

It’s flimsily made, although out of good materials like stainless steel and zinc; there are too many features to bother with that didn’t need to be included, like the one hundred different memory settings. And after all those misfires, I didn’t care about the vapor production and or the vapor at all, and when a device makes you give up on vaping, then that’s the point of no return.