SMOK Majesty Review: A Swirl of Vapor and Colors

The SMOK Majesty is a dual-18650 device with a resin-injected, zinc-alloy build. The device features a discreet, side-firing bar that blends into the unit’s straight edges. The front-facing OLED sits squarely in the center of the front panel. There are two adjustment buttons on either side.

The Majesty has a 510-connection up top and comes with the SMOK microprocessor inside. The device’s highest power output can reach 225W, according to SMOK. Users can take advantage of the device’s many vaping outputs. The Majesty features modes like wattage and temperature control, as well as several ramp-up modes.

The SMOK Majesty Up Close

The SMOK Majesty has the standard, straight-edge box mod frame. The frame is a zinc alloy, and it stands at 85.1mm (3.1”) tall with a width of 30.6mm (1.2”). The side-firing bar is concealed within the mod’s right side, and it has more throw at the top than at the rest of the trigger.

The full-color screen sits on the front of the SMOK Majesty with two adjustment buttons on either side. There is a USB port under the screen for users to install firmware updates to the mod’s processor. The Majesty is a dual-18650 device. Users can install the batteries via the hinged bottom door that has a slide-release lock. There are two base color options for the mod. SMOK released a carbon fiber and resin version of the mod, with each category having several color options. The Majesty has a 510-connection up top that is not centered but leans to the right. 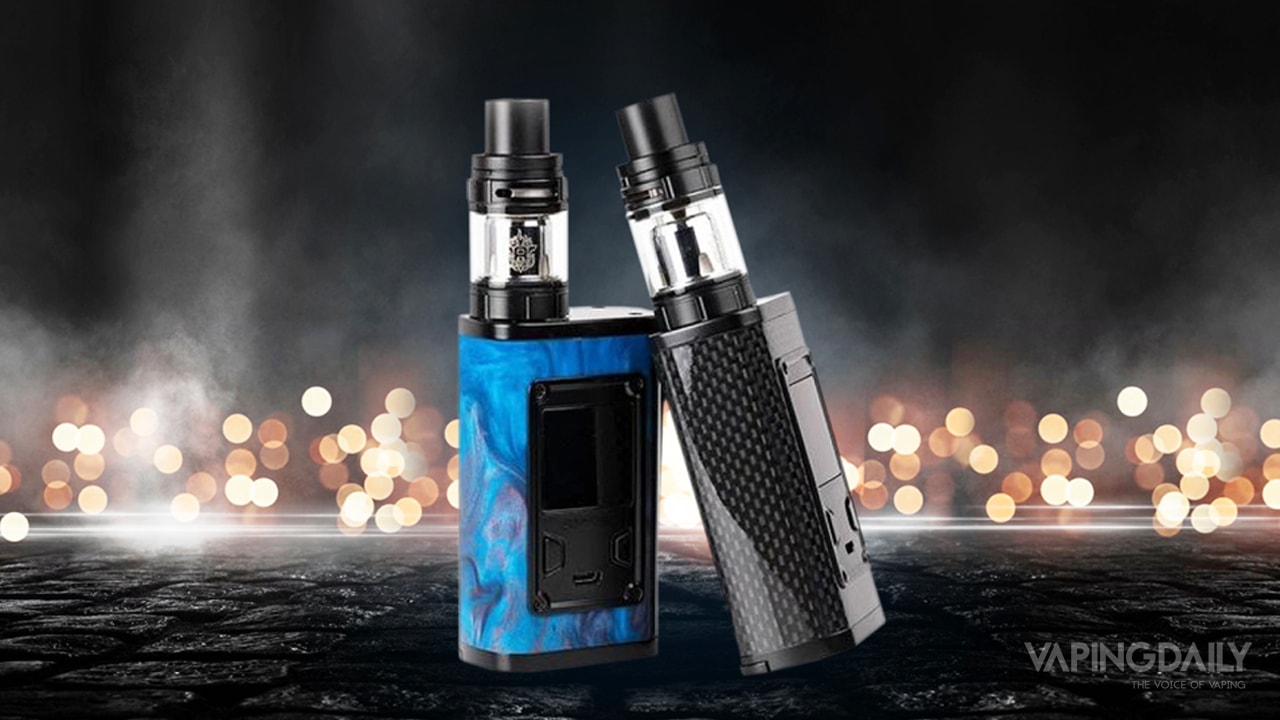 The chassis wraps around the entire SMOK Majesty and ends at the screen section. The processor inside the mod can go as high as 225W. The chip also enables several ramp-up modes that users can set to preheat their vape. The modes range from soft, normal, and hard.

The Majesty comes in a kit that includes the TFV8 Baby X tank. The entire kit comes packaged in the standard, SMOK packaging that consists of a black lift-top box with the “SMOK” brand emblazoned on the top. Inside the box, users will find the following:

The Look and Feel of the Majesty

The mod is quite large. With the tank attached, it is in no way a pocket-friendly or portable device. It is also very wide. It can be easily gripped, but with the two cells installed, it feels a little weighty. Of course, this is a high-wattage, dual-18650 device, so no one should expect it to be light as a feather.

With two high-amp 18650s in the SMOK Majesty, the battery life depends on several factors, like whether a person vapes at high wattages, or in temperature control at high temperatures. And someone who uses the SMOK Majesty vapes at high wattages, as this mod can go as high as 225W. A user can also calibrate the power output with the preheat settings. They can choose to have the vape hit low, normal, and high depending on their preference.

The Baby-X tank is a continuation of the long-running SMOK Baby tanks that came out with the Alien mod. The tank is not a huge departure from previous versions. One new feature of the atomizer is its swivel-back top cap, which previous Baby tanks had a push-button, and only revealed the fill port.

The airflow on this tank is also different from past versions. The airflow has moved from the bottom to the top, with two dual-top airflow vents that send air directly against the atomizer coil. The coils are another innovation, although they have been seen on other tanks like the original TFV8 Baby tank.

SMOK also extended the diameter of the tank to 24.5mm, which gives it a little more space for e-liquid. There is an extra glass piece in the kit, which can lower the e-juice capacity to 2ml for people in TPD countries. The coils for this tank are both sub-ohm, with one being a dual-coil and the other a sextuple head that can also be used with mech mods.

The Majesty has a big, full-color screen that shows things like:

Turning on the SMOK Majesty requires only five clicks of the side-firing bar. The absence of an independent “mode” button to make menu selections means that users have to rely on the firing bar to activate the device’s functions.

This can be a little confusing as there are a lot of functions from which to choose. Getting into the menu system requires three clicks of the SMOK Majesty, and there are other button combinations to access the device’s different modes or to lock the SMOK Majesty.

The Majesty Luxe edition mod is the same as the regular Majesty, but with a few changes. First, the Luxe edition has a shinier, more eye-catching outer design, as the color options range from gold prism to blue prism to rainbow prism. The Luxe version also comes with the TFV12 Prince tank, which is the big brother to the Baby line of tanks, as it can hold up to 8ml of e-juice.

The Prince tank also has a button-locked top cap for convenient refilling. The Prince also comes with coils that can vape as high as 100W, which is something not seen very often. The mod itself has little to no difference from the first Majesty, as it features the same chip, as well as the same vaping outputs. The only difference between the two versions is the shiny new exterior colors, as well as the addition of the TFV12 tank.

The SMOK T-Priv 225W is another dual-18650 mod that has a side-firing bar as well as tiny topside OLED. The entire chassis of the T-Priv has unique design accents. The most visible of which is the combo of LEDs and the cut-outs on the surface that reveal them. The LEDs are user-adjusted, and they can select from a various amount of patterns and colors.

The T-Priv has similar vaping functions as the other SMOK device, but it uses a slimmer and shorter frame, which makes it a little more portable than the Majesty.

The ProColor is another 225W mod that uses two 18650 batteries. It also has a full-color, front-facing OLED screen with the adjustment buttons inlaid into the screen and on opposite sides. There is also a backlight behind the trim of the screen that lights up in twelve different colors. ProColor has a side-firing bar as well that runs along the length of the device.

The ProColor also features a top-side 510-connection on its slightly narrower frame of 29.5mm (1.1”).

The SMOK Majesty is nothing new. It even seems odd that SMOK would give it such a grand name as if it had something new to bring to the table. The TFV8 is also past its prime. It has been out-vaped by new entries like the Horizon Falcon or the Uwell Valyrian.

With that said, people who enjoy high-wattage vaping or are experienced vapers might see this mod as a worthy addition to their roster of machines. It could also be a suitable replacement for any other aging, SMOK dual-18650 device, as it features a lot of the same menu functions and navigation style. The SMOK Majesty and tank produce quality vapor, there’s no doubt about that, but it is not for new vapers who would probably be better off starting with a pod or AIO device.

Do you regularly use SMOK devices? Are they your favorite brand? What do you think of the Majesty and the Majesty Luxe? Let us know in the comments section below.