The mod also houses a state-of-the-art AI-chip that enables users to communicate with the device and control its settings. The device also features a front-facing, full-color OLED that makes up its control interface, along with the two adjustment buttons underneath the display.

A Closer Look at the I-Priv

The SMOK I-Priv is a direct descendant of previous Priv model mods, starting with the original Priv mod, which was a single-cell, 60W device. Other entries in the SMOK Priv line of mods include the T-Priv, the G-Priv (which was the first touchscreen box mod the company released) and now the I-Priv.

The latest iteration of this line is also the most advanced, as it boasts a new cell configuration as well as the AI-chipset. The SMOK I-Priv stands at 96mm (3.6”) tall and has a width of 36mm (1.4”).

It uses a sturdy zinc alloy material for its build, which is cast in a rugged, militaristic design that resembles futuristic armor. The box mod also comes in a kit that includes the SMOK TF12 Prince sub-ohm tank with two coil options, one being a 0.15ohm Mesh coil and the other is also 0.15ohms but with a standard Strip design. 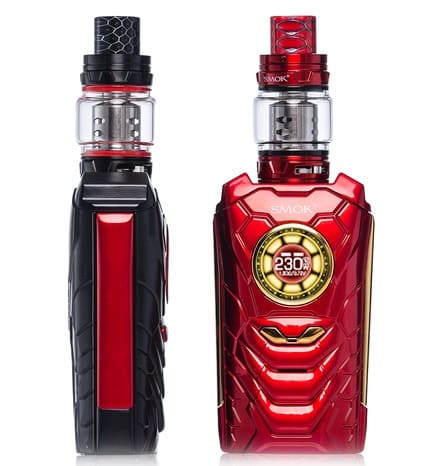 Apart from the aesthetic design, the mod also features a full-color OLED on its front, with two adjustment buttons in a rocker-style directly underneath. There are familiar touches to the mod as well. Like other versions of the Priv family, the new SMOK I-Priv has a lateral, side-firing bar as well as a USB port directly on its bottom for firmware updates.

There is also a tiny LED on the base of the device that is controllable via the front screen, although its exact use is unclear. The entire back section is where users install their cells.

The back is removable and is held in place with a magnetic connection. The device narrows at the top, where the stainless steel, 510-connection is housed. The full width of the top section is 25mm (0.98”), which is enough space to comfortably accommodate the 24.5mm (0.96”) TFV12 Prince tank.

The SMOK I-Priv is a full kit so it comes loaded with all the necessary accessories. As it comes with a tank, there are also spare coils, o-rings and other goodies that support the entire kit’s smooth functioning. 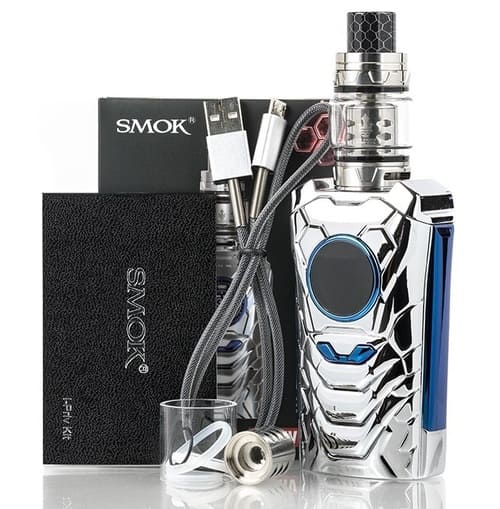 Here’s what you’ll get when you purchase the I-Priv kit:

The SMOK I-Priv has a smooth texture, despite the staggered front that is lined with grooves and ridges. The mod fits well in hand and has minimal heft to it, even with the two cells installed or the tank attached. The side-firing bar is super-responsive; a definite improvement over previous Priv mods that would only respond when pressed in a certain spot and repeatedly. The magnetic back cover is strong enough so that it does not shift or come off too easily.

The TFT OLED on the front is circular and has a smaller diameter than other box mods. The small size of the display does not hamper usability, as the important information displayed is legible, and easily read. The USB port is unfortunately located on the base of the device, which means the tank will have to come off if you want to upload updates to the chip firmware.

Getting to Know the SMOK I-Priv

Device has similar features to most, if not all, of SMOK’s other mods. Its highest power output is 230W, which is accurate considering the two 20700 cells inside. It could be less if a user were to install the 18650s instead of 20700 or 21700, but the AI-chip would compensate for that drag. 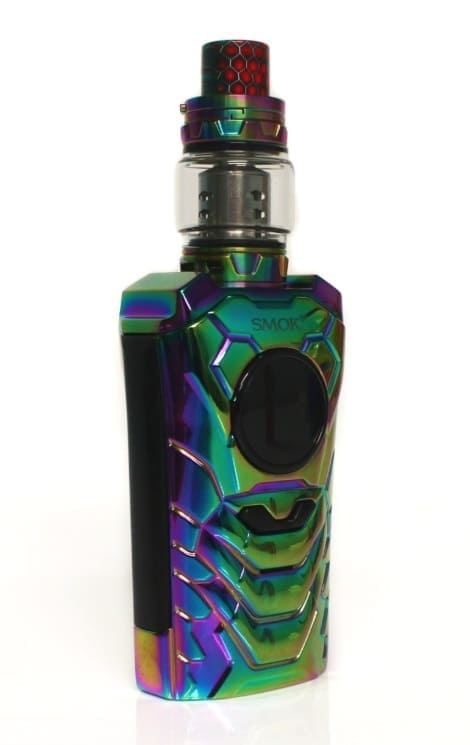 The I-Priv boasts regular variable wattage mode, temperature control for nickel, titanium, and stainless steel. Thanks to the newly-designed chip, however, users can also do much more. The main screen offers users a way to set memory modes that respond to voice commands so that the mod changes its settings automatically.

The vape works on voice commands, but not exclusively. Users can switch off the voice-control mode via the menu. The main display clearly shows users all their relevant information like battery life (of both cells), preheat mode, wattage, voltage, resistance and puff duration. 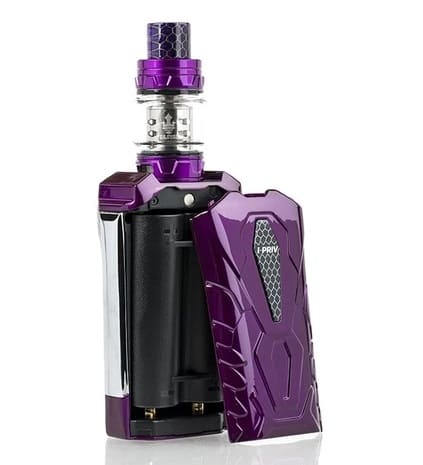 The SMOK I-Priv 230W still needs five-clicks to activate, which will bring up the main menu. The mod will also greet you with an eerie “Hello Master, I am your warrior”. Users can even change the gender of the voice from male to female or the gender-neutral robot voice.

Three-clicks of a side button takes users into the secondary menu that lists the device’s features like Mode Setting, Puff Setting, and My Setting. Some icons let users set the screen color or change the light of the bottom-LED light that could conceivably act as a flashlight, which would come in handy for builders who need some extra illumination when building their coils.

When paired with the SMOK TFV12 Prince sub-ohm tank and their accompanying coils, the I-Priv vapes exceptionally well. The two coils in the kit are sub-ohm and use two wire styles, mesh and strip. The coil heads each have twelve unique juice ports for easy priming before installing and filling the tank itself, which is recommended that you do before installing the coils. 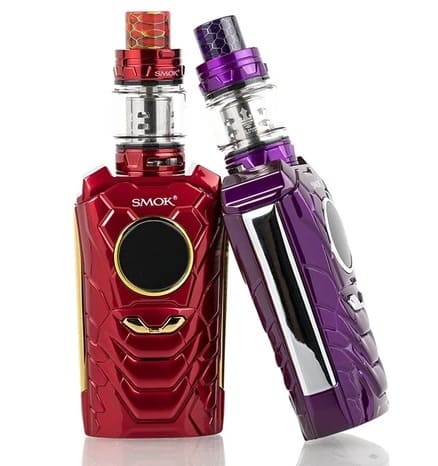 They are both sub-ohm (0.15ohm) and are rated for between 40-100W so they both can provide a satisfying cloud-chasing or flavor-chasing experience. The Prince tank has an 8ml capacity and an adjustable airflow ring on its base.

The tank also features a pre-installed 810-all resin drip-tip that is wide-bore and provides a good draw, but it can be adjusted with the bottom airflow ring for a tighter draw. The drip-tip is also removable if users want to use their preferred mouthpiece.

The device can respond and adjust its settings to fourteen different voice commands. Like other voice-control mods, users will know when the mod is ready to respond when a small microphone icon appears at the OLED top.

Users can speak to the mod to adjust various settings including:

Other commands and functions can lock and unlock the device, turn the LED light on or off, and adjust the color. And, like with other voice-control mods, users can also choose to deactivate the entire voice control feature.

The X-Priv mod is a dual-18650 device that has a high-power output of 225W. The device has a sleek, smooth front-facing 2” OLED that is full-color and takes up the entire front of the mod with two small adjustment buttons at the base. The X-Priv kit also has a side-firing bar similar to the other Priv device. 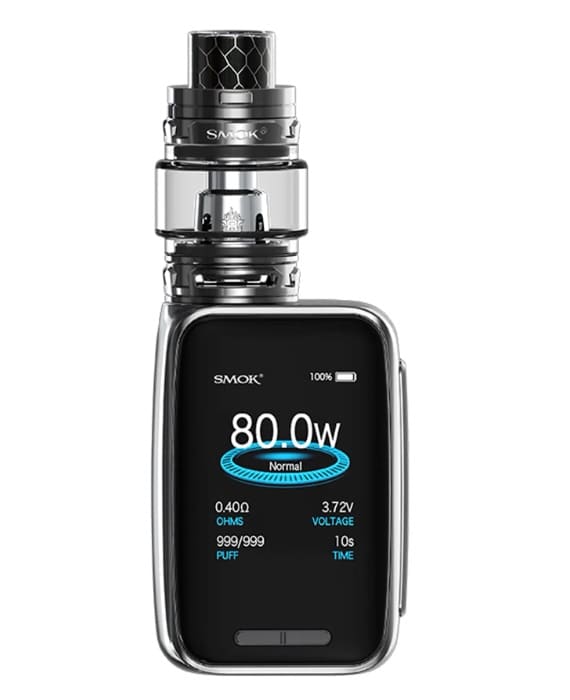 The X-Priv also comes pre-installed with either wattage mode or temperature control and also includes the TFV12 sub-ohm tank that can hold up to 8ml of e-liquid with two coil options, a 0.4ohm Quad coil, and a 0.15ohm T10 dec. coil.

The Avenger is another voice-control mod that features a dual 20700 unit that can reach a high-power output of 234W. The Avenger can also take dual-18650s with a special sleeve adapter. The mod has a large vertical display along its front and uses a highlighted side firing bar along with two adjustment buttons on the front that make up its control interface. 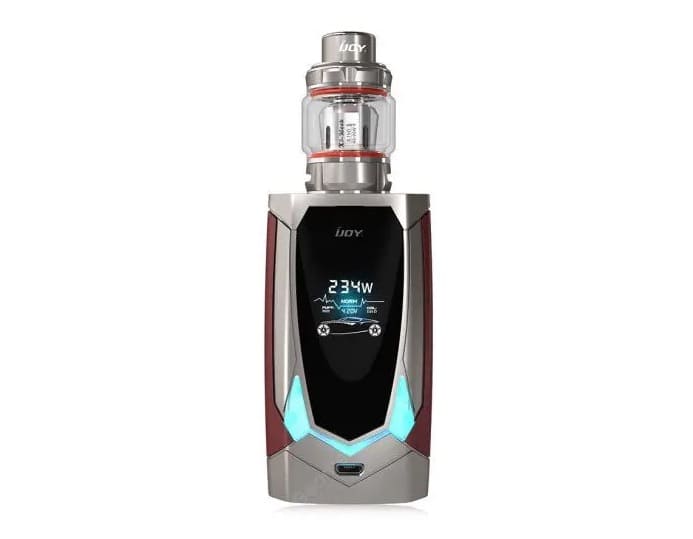 The Avenger comes with the Avenger mod that can hold up to 4.7ml of liquid with a 3.2ml optional glass piece. The two coils included in the kit are rated for between 40-90W, while the resistance of either coil head is 0.35ohm for the CIS-coil, while the other is rated at 0.15ohm Mesh coil with wood pulp and cotton wicks.

The SMOK I-Priv is the brand’s entry in the growing voice-control mod trend. While other similar mods struggle to hear and interpret the voice commands of their users, this VC-mod does not struggle to hear commands and it even responds to commands with its pre-programmed responses. The rest of the mod’s features and functioning run smoothly even without the VC enabled.

Despite the novelty of the VC, the mod is not necessarily an advanced mod that is only for advanced vapers.

The vaping outputs are standard (wattage and temperature control) so it has a straightforward operation that even new users can easily navigate. The preheat modes (soft, normal, and hard) are also regular features of SMOK mods, so anyone who is a regular user of the brand’s devices will be able to vape smoothly.