This is the first time I’ve seen a box mod named after a predictive quality. A predictive quality that is undoubtedly required to review this mod, since it is still in pre-sale mode, with the eventual release date being November 30th, 2017. But, regardless, the Sigelei Foresight 220W purports to point toward the future of box mods, with its main selling point, and also its only real distinguishing feature, being its interchangeable power system.

The Sigelei Foresight 220W can be powered with three different cell options, which are dual-options, to be sure. There is the standard 18650 option, but the Foresight kit comes with a special battery adapter that can be loaded with either a 20700 battery or a 21700 option, both of which are new to me.

And that’s it. The batteries. Alert the media! This dual-option battery customizability powers the mod that can output a maximum of 220W. The Foresight also makes use of a 1” TFT screen that displays real-time variables like the temperature and wattage level.

As far as customizability goes, the Foresight doesn’t push the boundaries of that end. Of course, the battery options can be switched out, but in the end, how you power the device means little to how well it can vape.

I’m not saying battery life and performance don’t count but taken as a whole, which is how a box mod should be considered, I don’t see any cause for celebration because the mod can take different kinds of batteries.

Or maybe that’s just the cynic in me.

The first words that popped into my mind when I saw this Sigelei mod was “gun-show.” The mod has these exposed metallic sides that made me think of a bro showing off his sculpted ‘ceps with a sleeveless t-shirt.

These exposed sides are also borrowed, or taken from, or inspired by, the VFeng from Snowwolf, a sister company of Sigelei that is also a 220W TC box mod. The two mods are very similar.

Taking a look at the specs sheet, I don’t see anything that stands out regarding functionality. You get TC, obviously, for nickel, titanium, and stainless steel; variable wattage control, ditto; and a straight-up power mode. The Foresight can vape with a resistance range of anywhere between 0.05 to 3.0ohms.

And that’s it, folks! The (imagined) Fuchai T3 tank is yet another contribution from the Sigelei imprint. The tank has a 2.8ml capacity and takes stainless steel coils. It is a top-fill variation that also has bottom airflow valves.

Imaging the two paired together, I can see how the two parts will function well together. Again, I’m imaging the vapor and it tastes pretty good. So, when the actual Sigelei Foresight 220W TC kit does come out, I’ll be sure to ask my bosses to supply me one so I can do an actual, real-life review of it.

For now, please enjoy this exercise in the power of my imagination.

I give the Sigelei Foresight 220W TC kit is to be determined. 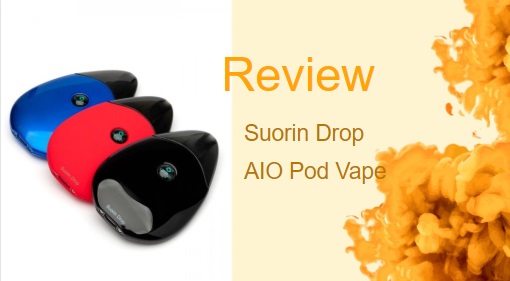 December 20, 2017
The Suorin Drop AIO Vape is an inexpensive lightweight vape that can mix liquids in the pod. It is easily concealable, and will not break the bank.