Rincoe Mechman Review: The Measure of a Mechman

The Rincoe Mechman 228W is a dual-18650 mod from the newly-formed Rincoe company. The device features a sturdy, zinc-alloy chassis that has a removable steel shell and is interchangeable with other similar panels. The Rincoe Mechman comes as a starter kit with the Mechman Mesh tank that uses single and dual mesh coils rated at 0.2ohms and 0.25ohms, respectively.

The device features a side-facing screen, which is also where the firing and adjustment buttons sit. The mod has a stainless steel 510-connection up top and it uses a magnetic back panel as its battery back door.

An Up-Close Look at the Rincoe Mechman

The primary build material in this mod is zinc alloy, but it is die-cast so it has a hefty feel to it. While it feels durable, the mod and sub-ohm tank are not very pocket-friendly.

The panels are supposed to be leather, although they do not feel like real leather, so maybe it’s pleather. It has a plastic feel to it, but the colors as well-done as they blend into the overall, low-key look of the mod itself. 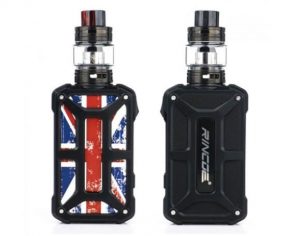 The mod eschews typical front-facing OLED designs and instead has its operating panel on the right side. This side is also where users will find the top-firing button right above the 0.96” OLED screen, and the two adjustment buttons that are right below the screen.

The mod has a removable cage-like attachment (only removable with a torque screwdriver, not a regular Philips screwdriver or flat-head).

Users can remove the cage and then replace the lower panel with one of seven different panel options ranging from the Star-Spangled Banner, the Union Jack or an all-Camo and all-black option. The other side of the mod is the battery bay door, which is removable and held in place with a strong magnetic connection.

The mod has slightly angled shoulders at its top with stainless steel, spring-loaded 510-connection up top. The 510-plate has a divot pattern that lets air get into the tank section, while on the bottom of the mod there are also several battery ventilation holes for battery venting.

The mod comes as a kit so there is a sub-ohm tank included in the box. The box features all the color options on its front so users can see all the other panel options. The box is a lift-open style and once users take off the top, they’ll see all the contents neatly arranged and packaged. 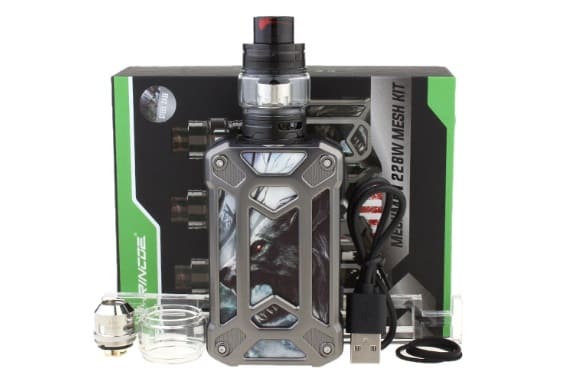 Here’s what users will find inside:

The Mechman mod is not a mechanical mod. The device is regulated and uses two 18650 batteries as its power source. For those who do enjoy vaping in an unregulated style the chip inside does feature Bypass mode, which sends the full power of the batteries to the compatible atomizer.

Apart from Bypass mode, the device also features variable wattage mode, temperature control for nickel, titanium and stainless steel, as well as TCR mode. The screen is elongated and rectangular and small, but it manages to fit in enough important information without being too crowded. 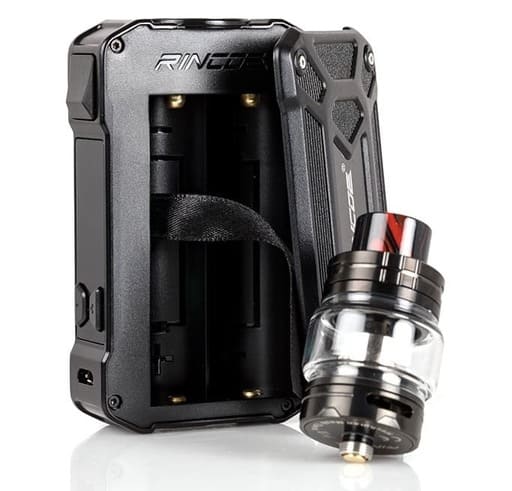 Five clicks of the firing button turn on the device after users install two cells in the back. The chip will automatically detect a new atomizer and prompt users if it is indeed a new atomizer attached. Three clicks of the button send users into the secondary menu, but nothing will change on the main screen.

The three clicks allow users to scroll through the device’s various outputs, which are displayed in the top-right corner of the screen. The screen also displays things like wattage (or temperature) battery life for both cells, puff timer, voltage, and resistance.

The Look and Feel of the Rincoe Mechman

The mod is a bit weighty. There are plastic elements in the build, mainly the cage surrounding the panels, but the sides of the device are metal and you feel when you hold it in your hand. This heft is both a good and bad thing. You want your device to withstand daily use, wear and tear, and the occasional tumble or two. 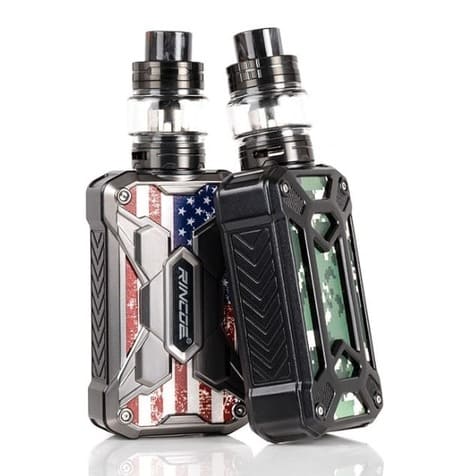 But you also do not want the device to be cumbersome and burdensome. With that said, the added bulk of the device is not such a problem, as its size still makes it ergonomic and easy-to-hold and operate. The firing button on the side has a curved shape and resembles the switches on mods like the Aegis, as users can press it up or down, rather than being a circular, protruding button.

The same goes for the two adjustment buttons that sit underneath the screen, as they are responsive and do not get stuck. There is a tiny tab on the bottom corner of the back panel that lets users remove the panel easily. The panel also stays in place and never moves or shuffles when you are holding the mod in your hand.

The Mechman Mesh sub-ohm tank is a glass and stainless steel atomizer with a pre-installed, wide-bore 810-drip-tip up top. The drip tip is full-resin and has o-rings on its base to make a snug fit with the tank’s opening. Users could replace the drip tip for their preferred mouthpieces, but only if the mouthpiece has o-rings on the bottom because the sub-ohm tank does not have an o-ring installed on its front. 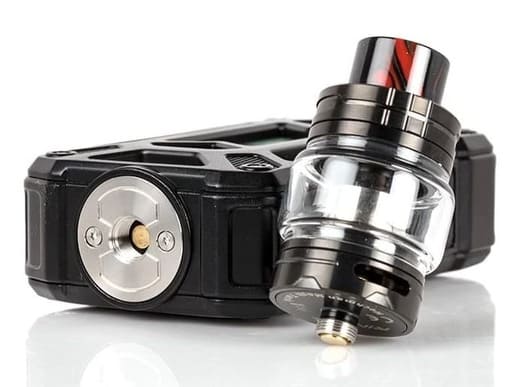 The tank has a 4.5ml capacity and has a spare glass piece in the kit (not an expander piece, it is also a 4.5ml glass piece). The Mesh sub-ohm tank has a push-back top cap that reveals the fill port when it is pushed back. At the bottom, the vape tank features dual airflow slots that are fully adjustable. There is a 510-gold-plated pin on the bottom as well that is compatible with the box mod.

The two coils in the kit are mesh coils but come in either dual or single coil configurations. The coils themselves feature wide-bore openings for better vapor production and the wicks use organic cotton. The sub-ohm tank itself has a 28mm (1.1”) base diameter so it can attach to the box mod with ease and has no overhang at all.

The mod has standard vaping outputs and a high-power capacity of 228W. Whether that rating is accurate is questionable. If the mod was a dual-20700 or 21700 device, it could reach those levels, but as it is a dual-18650 mod it could only get as high as 150W with 200W also being an optimistic goal. 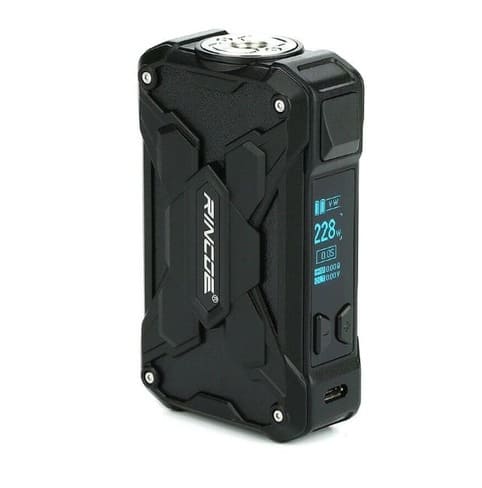 Vaping within the stated range of the coils — which is well below even 100W — produces somewhat good vapor in variable wattage mode. Using the single mesh coil rated between 40-60W and vaping at 50W produces average vapor both in cloud size and flavor. Looking inside the single-mesh coil head, the mesh section features a smaller coil than typical cores.

There is a lot of cotton for the wick, but the mesh only takes up a little space so it cannot produce the same quality vapor as other similar styles. The dual-core atomizer head suffers the same problem even though the two cores produce a large amount of vapor. With the airflow control all the way open, the dual-core atomizer head was able to give off great clouds, although the flavor profile was negligible.

The GeekVape Aegis Legend is another dual-18650 device with a near-indestructible exterior. The device has a leather-wrapped exterior combined with silicone, stainless steel, zinc, and aluminum alloy to make it waterproof, dust-proof, and shock-proof. 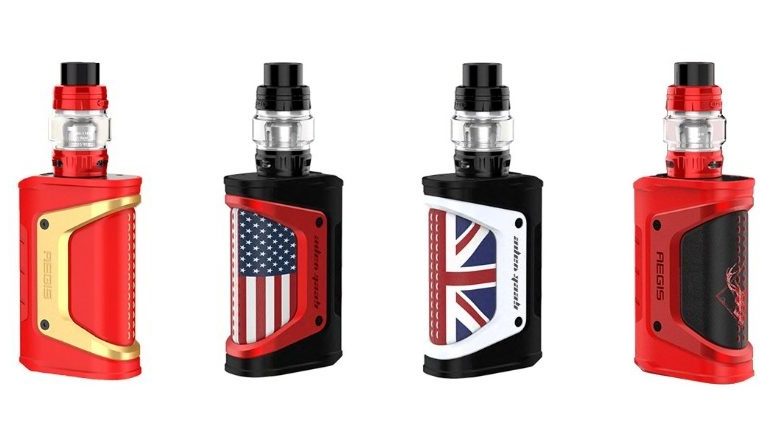 The GeekVape Aegis Legend has a high-power output of 200W and it also features variable wattage, temperature control, and bypass modes. The device stands at 90mm (3.5”) and has a front-facing 0.91” OLED screen to control its various vaping outputs.

The GeekVape Nova is also a dual-18650 box mod that has a different design format than other GeekVape mods. It has an all-square form factor with a removable side panel inlaid with a unique resin-design. 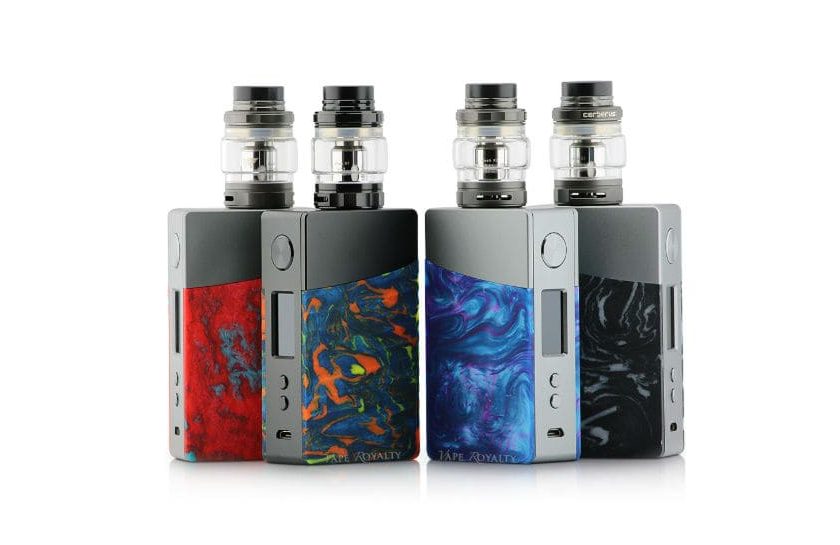 The rest of the box mod features an all-aluminum build and has a side-facing OLED screen that makes up its control panel, along with the circular firing button. The GeekVape has an advanced AS chipset inside that has a high-power output of 200W.

The Rincoe Mechman 228W mod and tank are a good first entry into the dual-18650 arena for the new company. The Mechman 228W has a sturdy, durable build quality. It has easy functionality as well as an easy-to-navigate screen that features standard vaping outputs. The tank also offers satisfactory vapor production.

Someone new to sub-ohm vaping would be comfortable using this device as it has an easy-to-use operating design with simple controls. The tank has low-wattage, mesh coils that give a good introduction to sub-ohm vaping with their mesh-style cores, but more advanced vapers would probably use their set-ups with this box mod.