The Lost Vape Triade is a triple-18650 mod that features the DNA250C color-screen chip (Evolv’s most powerful chip), which can hit a high-power maximum of 300W. The Triade is to-date the first triple-cell DNA-mod, as most Lost Vape mods to this point have only been dual-18650 box mods.

The Triade has a similar form factor to other famous triple-cell devices like the Reuleaux, which is to say it has a wide, polyangular frame. The batteries are all back-loaded and the battery bay door has magnets to connect it to the main device.

A Closer Look at the Triade

The Triade follows the path of other large, triple, and quad-cell devices like the Reuleaux, the iJoy Captain, or the SMOK T-Priv regarding its shape. The Triade, like all those other mods, has a wide back-end as well as a large, 510-plate on-top. The 510-platform is slightly raised off the rest of the device, which gives it more room to accommodate larger atomizers.

The Tridae comes with the standard DNA screen (along with the standard menu system) that they have employed for the last five years. The TFT screen measures around 0.9” and it is a full-color display. The screen is surrounded by the control panel elements, which is the typical user interface seen on Lost Vape mods.

The top firing button is stainless steel, semi-rounded hexagon, and is not as over-sized as you would expect for such a large device. Beneath the screen, the three other function buttons (also SS) are stacked together vertically along with the USB port to access the EScribe software feature of DNA chips. On either side of the user interface, there are three slots intended for battery ventilation.

The slots are meshed and are all placed at the bottom of the device to cool the cells from underneath. The cells are back-loaded and the carbon-fiber wrapped battery door comes off with a swift pull on the door cut-outs located on either side. There are no other standout design elements to the Triade other than the carbon-fiber paneling throughout its zinc alloy build.

The Triade comes as a stand-alone device, as is typical of Lost Vape box mods. The device does come with everything necessary for users to access the Escribe software if they already have installed on their computers. Here’s what to expect in the Lost Vape Triade kit:

The Look and Feel of the Triade Mod

The Triade stands at under 90mm (85mm to be exact) so it is not as tall as some would imagine. It measures 40mm in width so it is long in the waist, which is, of course, due to the triple-cell configuration of the device. The rest of the mod stands up to the standard laid down by LV itself for high-quality mods.

The base frame of the box mod is an all-zinc alloy, but, as mentioned, the buttons are milled stainless steel and they have a very good tactile feel to them. The rest of the device’s build materials like the stainless steel plate atop the box mod and the spring-loaded, nickel-plated 510-pin itself are also very well-made.

The plate is brushed and gleams nicely in the light, owing to the high-quality craftsmanship that went into the design. The 510-plate is centered and there are three grub screws on each corner of the plate to keep it in place.

Things You Need to Know about the Triade

The Lost Vape Triade 250C is an upgrade to the base DNA250 chip, but it has a new feature that has been a recent addition to the chip’s capabilities. That feature is the Replay function that saves all the settings of a user-selected vape for continuous replay. Users can engage the Replay function in any of the chip’s available modes from wattage mode to every material in temperature control.

The Replay function exists separately from the rest of the device’s functions but it is also compatible with every vaping output. The Replay feature is one of the options users can choose from when scrolling through the main menu options. Users can use the control interface to access every one of the mod’s eight modes.

The eight modes include wattage, wattage Boost, nickel 200, Titanium, Stainless Steel 316, Stainless Steel 430, Kanthal, and Replay. The presence of such exotic coil material like SS 430 and Kanthal is a testament to how advanced this DNA250C chip is compared to other chips out there.

Despite its advanced capabilities, the DNA250C and, by extension, the Triade is very easy to use. The TFT screen is full color and it has a crisp, sharp image. There is no mistaking anything displayed on the screen and all the readings are legible. Making things even easier for first-time DNA users is the simplified menu system.

There is no secondary user menu on the chip for users to choose from the vaping outputs. Instead, users need only engage the middle “mode” button on the control panel to engage the selector bar on the screen.

To switch among any of the device’s modes, users need only highlight the top icon, which shows the current mode. Selecting this top icon lets users scroll through the chip’s various modes like wattage, wattage boost, and all the temperature control settings.

There is a secondary menu on the chip that shows system information. Users can access this menu by selecting the “Settings” icon on the screen, which then shows users the menu items related to the mod’s display, date and time, diagnostics, system information, atomizer, and the version of the box mod.

Expectations are always high for users who vape DNA-devices, and this new device is no exception. The smooth functioning of the menu system was a sign of how well the device would perform when vaping. The Triade can use any tank style as well as any sized tank up to 30mm thanks to its expanded 510-plate.

The advantage to a DNA-chip is also the fact that it boasts a near-perfect power accuracy, which in this case, is 300W. Other mods may list something like 250W or something in between 200W and 250W, but they lag or they do not meet their stated threshold either because they cannot muster enough power or because of their battery types.

Devices that use 20700 or 21700 cells could conceivably reach those high power outputs if they had the right chip to distribute power evenly. But they do not, which is not to say that they could not reach 250W; it depends on the device and chip. DNA, however, is one of those chips that does not lie.

Apart from the accuracy of its power rating, the DNA chip is also well-known for its precision temperature control feature. This chip boasts SS 430 and Kanthal wire, the latter of which is not compatible with temperature control vaping, but perhaps, one day it will be. The device can handle low, sub-ohm resistance coils and it has even more vaping options with the Escribe software.

The Paranormal was the debut-mod of the newly-designed chip of the Triade DNA250C 300W. It features a dual-18650 power configuration in a stylish, durable, eye-catching exterior mod that features zinc alloy and genuine leather elements.

The Paranormal also has the same user interface as typical Lost Vape devices with its three-button control panel. The OLED measures 0.96” and it lets users access the device’s several options from wattage mode up to 200W to temperature control in nickel, titanium, and stainless steel.

The original triple-18650 mod, the Wismec Reuleaux Gen 3 is still heralded as a game-changer and continues to impress new users with its powerful capabilities.

The Gen 3 features the same tri-sided exterior with zinc alloy build elements along with the 1.3” OLED along the entire front of the device. It has a two-button control panel that lets users control the device’s many outputs from wattage to temperature control.

The Triade DNA 250C is another soon-to-be hallowed device in the DNA pantheon. This tc box mod has the distinction of being the brand’s first entry into the triple-celled mod market and it meets all expectations. The Triade does not break any molds in the exterior design, as it follows the same set up of other big devices.

It continues with the same quality of design and function that Lost Vape created a long time ago. The device has excellent build quality, while its screen is bright, easy-to-read, and easily navigable. The Triade will, of course, appeal to regular DNA-users who have become accustomed to the chip’s unrivaled performance. But Lost Vape took steps to make the Triade a little more accessible to new users with its simplified menu system and Replay function. 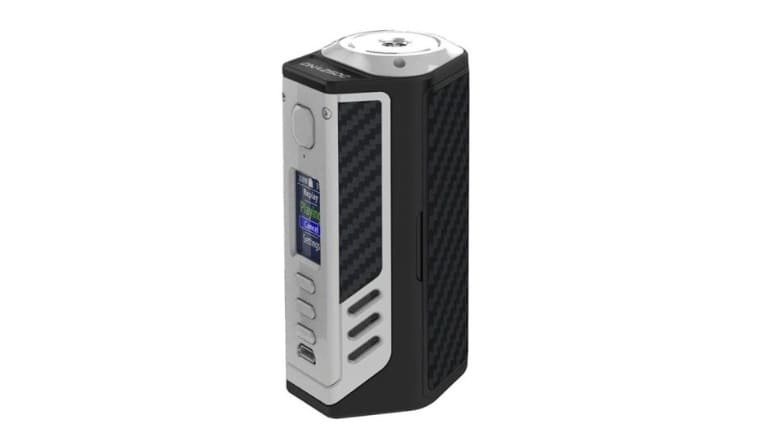