If there’s one question that’s preoccupied mod manufacturers over the years, it’s how to create an elegant, aesthetically pleasing device while keeping it completely functional and reliable. Many mods have failed, but out of this effort has come a major success: the Kanger KBOX 200 MOD.

A very simple yet functional device, the KBOX 200 is not only small in stature but packing surprise after surprise in its compact frame. It might just be the mod you’ve been waiting for. Here’s a closer look at what the device has to offer.

When it comes to vaping, you can never overlook the critical role that looks play when you’re choosing a device. The Kanger KBOX 200 MOD is made from high-quality zinc and aluminum alloy, which gives the device strength, durability and an incredible ability to age gracefully. To tie the gorgeous looks up, the device comes in options of black, red or white paint which are then glazed to a beautiful sheen. 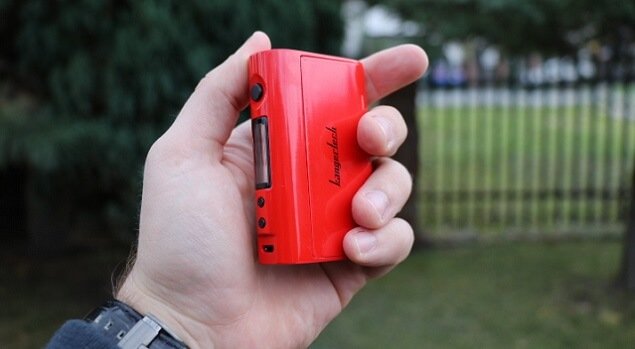 The external design also features some subtle rounded corners with contrasting red or black buttons, and the OLED screen is the cherry on top of it all.

To achieve the functional design feat that it has, the Kanger KBOX 200 MOD must’ve required a lot of technical know-how. Though it might not be the easiest mod to hold for people with small hands, it is the most minuscule dual 18650 mod with the ability to fire up to 200 watts. In fact, it’s even smaller than some mods that are even lower-powered. That calls for some serious innovation.

First is the newly developed Kanger chip, which happens to be the most sophisticated yet. It has a maximum of 7 watts with one-watt increments to fit your needs. Even more exciting, the temperature is also in one-degree increments as opposed to the usual 10 degrees. It gives you the most control and precision when using the device (like in the TC mods).

The new chip has an incredible sensing ability that keeps tabs on the coils 1000 times per second. This means that you get better temperature accuracy and consistency with the drag from the tank’s drip tip. The chip is also able to detect a variety of coils including those made from Ni200, stainless steel and even those that are made from titanium.

The chip has to be the greatest aspect of the mod and, given its abilities, it’s safe that this device can deliver the best vaping experience of your life if used to its abilities.

How User-Friendly is it?

You already know that it’s the smallest of its capacity in the market. You also know by now that it has a simple, elegant design and gorgeous finish. But is using the device as simple as it is in the eye?

To turn on the mod, you only need five clicks of the fire button. Because of the unique build of the button, these are smooth and swift. If you want to turn it off, the procedure is the same as that of turning it on – five quick clicks.

If you would like to access the various modes the device has to offer, you can do this by pressing the firing button three times. Initially, you might be presented with a mode that does not match with the loaded tank. All you have to do is cycle through the different modes until you’re able to find one that suits you.

A slight downside you need to remember here is, the device does not have a memory mode. That means you will have to go through the same cycle of modes every time you need to change. Also, there is no bypass mode on the Kanger KBOX 200 MOD which means more or less the same thing.

Another function essential to the device include a locking feature that prevents you from accidently increasing or decreasing the temperature or wattage. For this one, you hold down the firing button together with the plus and minus buttons until you see the word ‘LOCKED’ on the display screen. To unlock, you just follow the same procedure.

An excellent tip to keep in mind when using this box mod, and especially when switching vape tanks, is that the coils must be at room temperature. If the tanks are too hot or cold when the tanks are being changed, then the chip will not be able to detect the temperature accurately.

The other feature that you won’t find on any other mod is the ability to customize the display. Sure, this doesn’t improve the vapor or flavor in any way, but it gives another reason to enjoy the aesthetics of the device. When you hold down the plus button, you can switch between two different contrasts. The first is to have the black characters with a white background while the alternate is the white characters with a black background.

With the increased demand in vaping and better understanding of the trade, consumers are developing a more personal palate that can only be satisfied by increased control. The Kanger KBOX 200 MOD provides that flexibility, and only for a fraction of the price. Simply put, it will be one of the best box mod that you’ve ever bought. So is it worth the price? A resounding “yes.”

With a neat, simple and elegant look, an extensive collection of features and functions, and a well-thought-out mode of operation, this device is original, affordable, and easy to use. It’s one of those mods that you can’t help but wonder at the brilliance of the design team.

The chip is particularly impressive given its broad functionality. It is a great box mod that offers an even better experience, without requiring too much expertise.