You always remember your first. I’ll always have a soft spot for Innokin. One of their devices was one of the first devices I ever reviewed. If I remember correctly, it was the Innokin Endura T20.

Ever since the Endura, however, I haven’t had much chance to review Innokin products. I did do a review on the Innokin Disrupter a few weeks ago, which was an interesting take on the removable battery setup. And, overall I came away satisfied.

Today, I have the Innokin iRoar Oceanus 20700 110W Starter Kit in front of me, which for some reason has two names. But I guess that is in keeping with duality found throughout the entire kit. The iRoar Oceanus comes beautifully packaged in a book-like box that opens up just like a book to reveal the contents neatly snuggled inside.

So the Innokin iRoar Oceanus has two names; the kit comes with two batteries, which is rare to find on a starter kit, even though the mod is only powered by one cell; and there are … you guessed it, two coil options, with a pre-installed Scion Kanthal BVC 0.2ohm coil in the Scion tank, and an RBA option also included in the kit.

So, already, this starter kit promises to deliver vaping satisfaction on various levels. It appeals to both beginners and those vapers who have been around the vaping block. It promises continuous, powerful vape sessions with the inclusion of two, high-drain 20700 batteries and all the parts you’ll need to build your atomizer easily.

I’ve already mentioned how wonderfully packaged the Innokin iRoar Oceanus 110W starter kit is, which a lot of reviewers have also pointed out. And it’s rare that a company would so proudly display their wares in such a manner. But I also think that because of the breadth of components that come in the kit, Innokin had to take special care as how to pack it all in there.

So, when you finally receive your Innokin iRoar Oceanus 110W starter kit, here’s what you’ll find:

What the Oceanus Is All About

So, here we are, back to scrutinizing a box mod’s build, size, weight, just about everything that makes it a box mod. Although, ever since I reviewed the Vaporesso Swag Kit and was introduced to the brilliance of the Omni chipset included in most of Vaporesso’s device, I’ve been paying much more attention to chipsets in general.

The Innokin iRoar Oceanus 110W features the proprietary Aetheon chipset that gives the Oceanus the ability to add an extra 20% of power for the first 20 seconds of your first draw. The chipset also lets you charge the batteries within the device at 2A of power.

So, moving outward to the physicality of the iRoar Oceanus, it is a good-looking device. It strikes a balance between refinement and being well-machined and well-built, even though it does have a plastic chassis. The battery cover gets removed with enough force but doesn’t come off whenever you touch the device.

The firing button, selector buttons, and the USB port are all found on the side of the device. The OLED screen, which is somewhat small, but the mod is quite small in general, is on the opposite side of the mod. The screen’s readout does disappear rather quickly if you let it stand for not even longer than two seconds, so it’s always having to be recalled by pressing the firing button.

Right outside of the removable battery chassis are some battery ventilation holes, and right on top of the device, there is the spring-loaded, stainless steel 510 connector pin that can hold at least a 25mm diameter tank.

The Scion sub-ohm tank is a tank I haven’t vaped on before. It is a very well-built, stainless steel and glass combo with thicker than usual rims and lips that are beefed up to greater-than-usual proportion, the chimney especially. The wide-bore Delrin drip tip unscrews to let you access the fill ports, three of them, which are well-spaced apart and easy to use.

It can take 3.5ml of e-liquid, but the bubble tank attachment that you can use with the tank increases its capacity to 5ml. The Scion sub-ohm coil, again, is rather broad and has a bottom vertical coil (hence the BVC) and bottom airflow system with a top-fill.

Fire Up The Oceanus

It’s interesting that Innokin did not decide to include a few basic, at least now, vaping modes that have become standard issue for most new box mods. Notably absent from the Innokin iRoar Oceanus’s skill set is temperature control.

The mod can still vape in variable wattage, power mode, voltage and a bypass mode, and that’s it. So I’m not sure why Innokin decided to not include temperature mode on the iRoar Oceanus, but, just between us girls, most vapers that I know have grown tired of TC, and I think it’s considered about as popular as the Macarena.

CCW and CCT are where it’s at nowadays, but it does require a little more complicated chipset to be included on a device which is supposed to be a starter kit anyway. The button combos needed to access the menus don’t require double-digit finger aerobics.

They’re even less. Only three button clicks of the firing button to turn on the device and the OLED screen again could have been, if not larger, than longer. There are a few superfluous features on the menu set like a puff counter and a vaping timer that I don’t see having any use or function.

Clicking the down button and the firing button at the same time allows you to enter “power” mode, which is the style that lets you get that extra wattage boost for the first two seconds of your vape. I know that might seem like it makes a difference, but compared to the precision and length CCW and CCT modes offer, the “power” mode does seem a little trite for my snobbish tastes.

I don’t mean to be a snob, but using CCW and CCT were like trying a fine wine, and then going back to drinking grape juice for the rest of your life. You want what you want; and I want CCW and CCT, all day, every day.

the Innokin iRoar Oceanus 110W Starter Kit: How It Vapes

Because of time concerns, I didn’t get around to building my own RBA. All the ready-made components included in the kit – coils pre-wrapped, cotton pads, even a tiny screwdriver! – along with the easiest-to-use build-deck out there, the Velocity decks should have made for an easy build.

But if we’re honest, and I always try to be honest with you, dear reader, let’s chalk that one up more to laziness than ignorance. So I did ultimately use just the Scion coils with the Oceanus, even though the fact that Innokin an RBA option with this kit is a pro, mos’ def.

What my laziness did not prevent me from using, however, was the bubble tank attachment that threw on an extra 2 ml of e-juice capacity to the 3.5ml capacity with the regular glass tube. So I did unscrew the top cap, remove the preinstalled glass tube, and place on the bubble tank.

I loved the three large fill holes on the top of the tank, although you can’t use any other drip tip with the tank since the top cap and the drip tip are the same piece. The bottom airflow valves can be turned all the way around, and they are equally covered or uncovered, depending on whether you like direct lung hits or mouth-to-lung hits.

And finally, a coil that can take the maximum output of its companion mod! I know that personalization is the name of the game when it comes to maximum outputs and then using other coils and atomizers.

But I was glad to see that Innokin just gave you a coil that could vape up to 110W, which the Scion coil can do. Even though the coil could take up to 110W, I didn’t get anywhere near that kind of output.

I stayed way lower than three digits anyway. I got as high as 70W on the Scion coil. I went to the power mode, and honestly, I didn’t find much “boost” concerning flavor or cloud production with that extra two seconds of 20% power.

So, as much as Innokin would like to have it as a selling point, those extra two seconds do not turn the mod into the Starship Enterprise at warp speed.

Oceanus Or Other Mods?

I thought it would be interesting to pit two fellow brand-mates against in each in a civil war-type contest, so I decided to take a look at both the Innokin iRoar Oceanus 20700 110W starter kit and another one of Innokin’s more popular devices, the Innokin Coolfire IV 100W.

They both have starter kit elements, like the inclusion of sub-ohm tanks, extra coils, although the Coolfire IV does not have an RBA add-on, which because the iRoar Oceanus does, puts it at an advantage already.

The Coolfire IV does feature temperature control and Smart atomizer recognition that automatically reads your coils and sets the appropriate resistance. The iSub tank that comes with the Coolfire IV also has some unique features that put it in a class of its own.

But I think the iRoar Oceanus takes this one just for the number of features, extras, and versatility it offers.

While the Aetheon chipset did not allow for such revolutionary features, it still gave you some options that can’t be found on other devices, like the power boost feature. When I say customizability, I’m referring more to the choice of the two coil options, one of them being an RBA build.

Anything that’s included in a starter kit that lets you ramp up your tank’s e-liquid capacity to a hefty 6ml is aces in my book.

The Innokin iRoar Oceanus’s conspicuous lack of temperature control and its reliance on the tried and true modes like variable wattage, power, and bypass mode made it easy to use, and the screen allowed for simple navigation.

What I Didn’t Admire

The screen was a bit too small for me and could have been helped by not only being bigger but by removing some of the more peripheral features like puff counter and vaping timer. It also went black too quick, in less than five seconds.

This was something that the Innokin Coolfire IV missed as well, and that is the fact that the tank(s) did not have to protrude 510 connectors that made them compatible with mech mods. So don’t even think about attaching either the Scion or the iSub to any hybrid mech mods like the Noisy Cricket.

In A Few Words

The Innokin iRoar Oceanus 110W starter kit has been making the rounds as one of the more popular starter kits out there right now. And I think it’s mostly because you get a lot in your kit.

It is an easy-to-use, simple setup that also allows for customizability, on some level, with the RBA coil base and premade coils and cotton pads ready to go. But, if you are a legit starter, then the pre-installed coil option and Scion tank lets you get vaping right away without much prep time.

It’s not exaggerating to say that the Innokin iRoar Oceanus 110W Starter Kit does have something for everyone.

I give the Innokin iRoar Oceanus 110W Starter Kit a well-deserved 8/10. 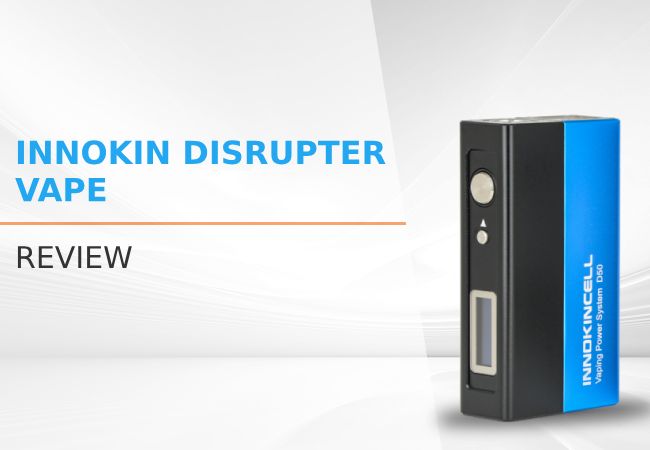