I was on a momentary high after reviewing the Joyetech EKEE starter kit. I lauded the Joyetech EKEE for being a ray of sunshine in an otherwise dark and gloomy vaping world that features all these brooding, dark, and humorless box mods that take themselves way too seriously. And, wouldn’t you know it, what’s the next box mod that lands on my desk? A dark and humorless box mod that takes itself way too seriously, the Aspire Speeder 200W box mod that comes in a starter kit featuring the Athos tank and two coil options that lean heavy toward direct-lung hitters.

Now that I remember, I liked the Aspire Gusto. It was a handy go-to pod mod. And now that my memory has been jogged, I also reviewed the Aspire Zelos box mod with the Nautilus II tank, which I also liked because it had a low-power output in a world overrun by 200W devices.

So I guess it was only a matter of time before Aspire came out with a 200W device, and here it is, the Aspire Speeder 200W. The Aspire Speeder 200W can reach vaping altitudes (or speeds, I guess would be more appropriate) of 200W because two removable 18650 batteries power it.

Here are some of the other exciting features of the Aspire Speeder 200W Starter Kit:

The Kit Consists Of

p>Here’s what you’ll receive when you buy the Aspire Speeder 200W starter kit:

The Build: My Impressions

Upon taking the Aspire Speeder out of the box, I immediately recalled the Eleaf iKonn 200W, which I detested. The Aspire Speeder has a similar all-black (mine came in all-black) color scheme with rounded edges all-around and a centrally placed OLED screen.

Fortunately, the screen adjusts automatically whenever the screen is turned around, so it’s neither awkward to read or requires a complicated button combo to flip the screen like with the iKonn. The rest of the mod is as plain as Jane from Spain. It’s made of a very cheap-feeling plastic, rubbery coating that does feel like it could take a good thrashing or two. 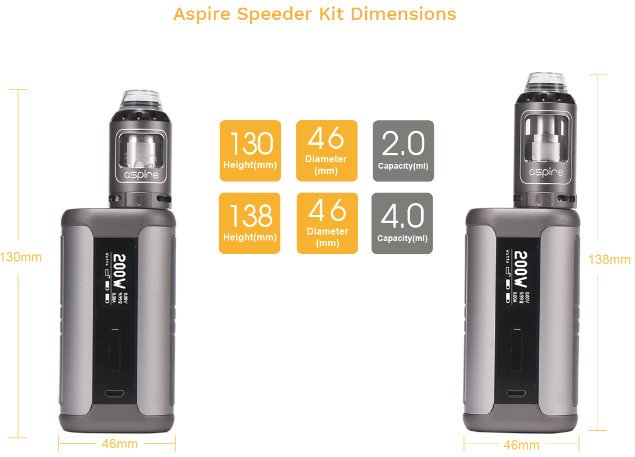 Talk about a waste of space. The 510 threading on the ample connector pin is smooth, almost sharp (I nearly cut my finger running it across the thread). The battery door, where you load your two 18650 batteries, at the bottom of the device opens by throwing a convenient switching mechanism that you push to open the loading port.

The door also has a few venting holes. You’ll see the gold plated connector plate on the opposite side of the battery door, and the positive and negative polarities are marked, both on the plate and inside the mod.

The Aspire Speeder skirts the line between a portable and mid-sized box mod. It’s not exactly tiny, at almost 140mm high, and a little over 30mm of thickness. But it fits well in hand and makes for an easily grippable device thanks to that rubberized coating.

The OLED screen runs down the center of the mod, and measures in length of about 0.96 inches (or 24mm). The selector button is elongated and is not marked by a “+” or “-,” but it is intuitively simple. Right underneath the large selector button, you’ll find the USB charging/upgrading port.

How to Customize Modes

The Aspire Speeder is not such a complicated device to use or navigate. The firing bar and the selector bar are all that you need to get through all the menus and features loaded onto the chipset.

You turn the device on with five clicks of the firing bar, which then illuminates the main menu. On this main menu, you’ll see displayed the standard wattage setting, amperage, resistance of your coils, and the voltage of your device.

Because it takes two 18650 cells, the main screen also displays the battery life of each cell, but I’m not sure if the mod has the trickle down charging system that devices from Vaporesso have.

Nevertheless, the vaping modes, as mentioned in the specs bullet list above, run the gamut of your standard vaping styles, from temperature control, all the way to TCR mode and everything in between like variable wattage, and variable voltage.

However, you can also access Aspire’s take on the contemporary custom curve control settings that, at least on the Aspire Speeder allows you to customize your power settings (hence the acronym, CPS) at intervals of 0.1s. Everything else about the Aspire Speeder’s parameters is straightforward

It’s Time For Some Vaping

Aspire has also made a name for itself because of the quality of the tanks and coils that it creates. Both the Nautilus and the Triton are two of the more well-known sub-ohm tanks that many vapers I know swear by.

I had never used the Athos tank, so I was interested to see how it would perform. It did come with that unfortunate stainless steel glass shield that the earlier version of the Triton tank had, and that drove every vaper I know mad with its immovability. 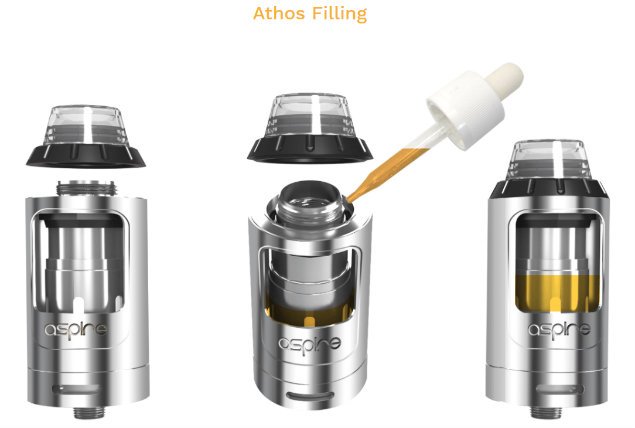 But, thankfully, the metal sleeve that protects the glass is removable on the Athos, which makes for easy cleaning and allows for the glass tube to be replaced should it ever break or crack. One great addition to the kit was the two mouthpiece options, with the tank coming pre-installed with the thinner bore 12mm proprietary mouthpiece.

Two coil options come with the starter kit. Both coils will please the sub-ohm vapers out there, with both coils resisting at 0.3ohms and 0.16ohms. The latter coil head is a Penta-coiled coil, with five coils wicked with organic cotton.

I decided to go with the 0.16ohm coils, and what a vapor trail I left; looked like I was riding on a 747. The vapor shot straight out of my mouth was completely opaque. The cloud production was fantastic, and the flavor notes were present but more subdued than I would like to have felt.

Comparing to Other Box Mods

I believe the last 200W device I reviewed was the Wismec Sinuous FJ200 that performed well, in my opinion, and had no problems chucking, thick, white streams of vapor. The power output of the Sinuous FJ200 paired well with the Divider sub-ohm tank that came included in the kit.

The two WS coils in the Sinuous kit had somewhat higher resistances than the A3 and A5 of the Aspire Speeder, so that was why my clouds come out so lengthy and potent as they did. It looked like I had awoken a genie from its bottle with all the cloud that was coming out of me. 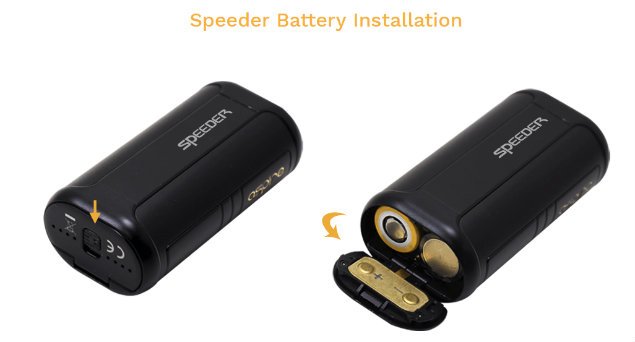 Cloud production is, of course, what you’re looking for on devices that can vape at 200W. The great thing about the Aspire Speeder was that I didn’t’ even have to push 200W or even 150W to get great clouds. I vaped with the A3 coil at just a shade underneath the 75W maximum at 70W, and I was in cloud heaven.

The A5 was even more of a visibility threat just at the 100W minimum. The Sinuous, of course, could also be used with these coils and the Athos tank, so I suppose, in reality, it’s the A3 and A5 coils from Aspire that win the day, and not necessarily the Aspire Speeder 200W.

Overall, I think the Aspire Speeder 200W starter kit has changed me as a vaper. I was very dismissive of cloud-chasers in the past, and everything that had to do with clouds. “You want clouds, then just look up,” was how my thinking went.

But after seeing not only the amount of cloud and vapor that I could get out of the Aspire Speeder, but just the duration and thickness, like milk, that came out in my exhale was just revelatory. I think I’ve changed my perspective entirely on the usefulness and worthiness of a mod’s ability to produce great-looking clouds.

The coils were fantastic. The Athos tank was well-built and solid. The stainless steel glass cover came off easily but was also a very muscular accent on the entire device. And the mod itself held up to consistent klutziness on my part. It was easy to use, the menu options were not plentiful, but enough to perform well and be easily navigable.

I’m a changed vaper. I have seen the vapor!