The Wasp Wax Air Dab Pen is a compact and portable dab pen that will provide users with the tastiest powerful dabs. It comes in two colors, and several extra accessories upon purchase. Consumers will receive a 900 mAh Wasp battery, one carborundum coil, a USB wireless charger, and a dab tool in a pretty gift box from Mig Vapor. Users will also receive a user manual instructing them on how to use and clean the dab pen. It comes with a 90-day warranty for additional consumer confidence in the product. 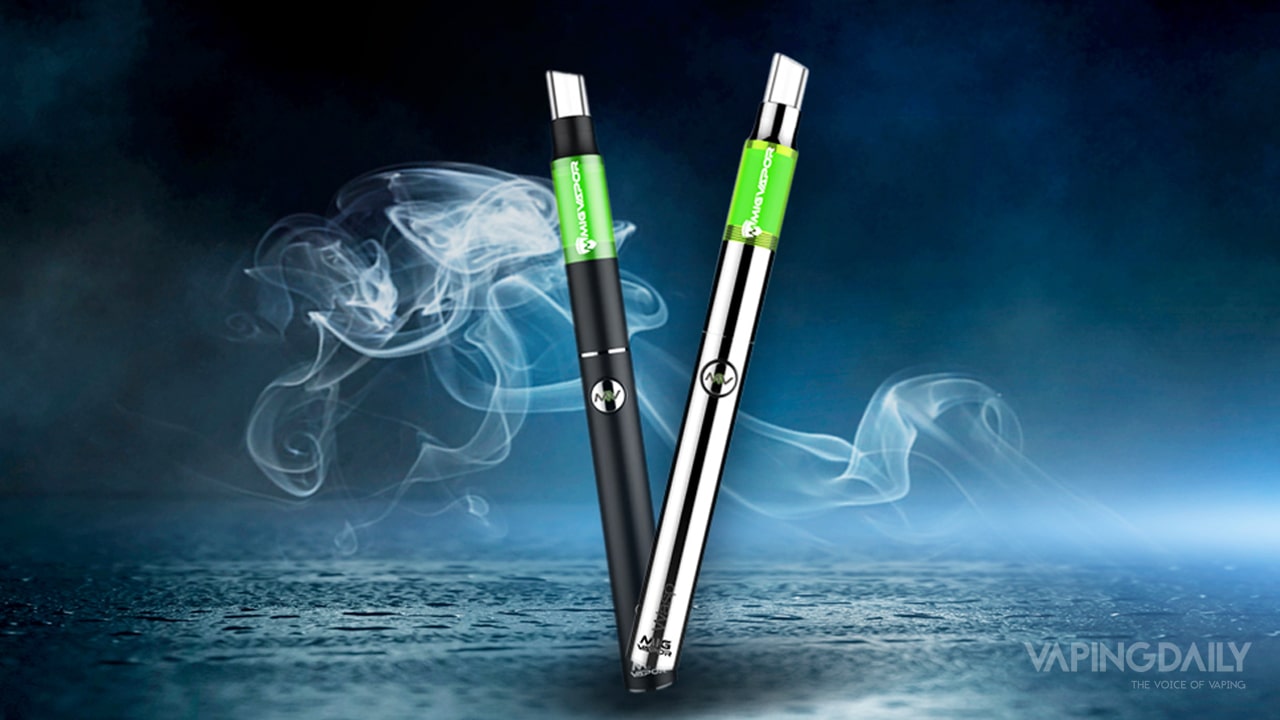 The Wasp is easily portable and super discreet. It is very easy to use, and its low price means low commitment for purchasers. For these reasons, this device is great for beginner vapers. However, it is such a dependable dab pen that seasoned vape veterans will also enjoy it. It only takes 2-3 seconds to heat up, which is incredibly fast for the industry standard. It also uses the highly praised carborundum coil to keep the vapor users are inhaling cool and tasty, while simultaneously protecting the pen’s insides from high temperatures.

This pen is able to vaporize both thick and thin waxes. It can heat up to insanely high temperatures between 400 and 455 degrees Fahrenheit, which is ideal for vaporizing waxes. Its mouthpiece is made of Pyrex glass to ensure that it is easy to clean, and always looks pristine. Often times mouthpieces that are made with plastic get scratches, which hold bacteria and look grimy. The Wasp will never have this problem.

Aesthetics and Feel of the Wasp

The Wasp is by all accounts a sophisticated and sexy dab pen. Usually, vape pens, and vaporizers in general, look very tacky and lack durability when they are sold for anything lower than a hundred dollars. However, the Wasp does not sacrifice aesthetics for a better price. It maintains quality and affordability. It comes in two traditional colors: black and silver. 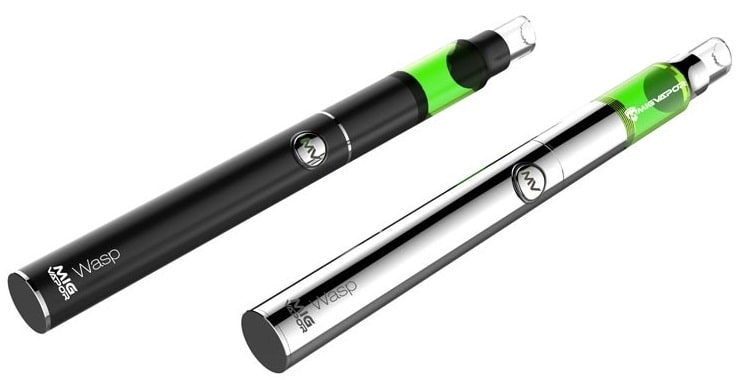 Depending on which color the consumer chooses, the body will either be all black or all silver, separated by an opaque green tinted tank. At the top of the pen sits a crystal clear and small mouthpiece to comfortably rest in the mouth during dab sessions. Since it is so light and small, it is highly concealable for those who do not want to draw attention to themselves while using their pen.

Vaporization of the Wasp

The Wasp was designed with the most advanced technology in the industry because Mig Vapor cares about quality. Despite its small size, the Wasp has an ultra-powerful vaporizer inside that turns wax concentrates into the most enjoyable vapor that is the perfect temperature. It utilizes a carborundum coil to do so. This coil is wrapped with 316 stainless wire for added functionality. Carborundum coil are arguably the best coils to use in vaporizers because it does not melt.

Additionally, this type of coil helps reduce the high temperatures of the users vapor so they do not burn themselves while taking a hit. It serves as a great conductor and has low thermal expansibility which improves the experience while preventing high temperatures from harming the insides of vaporizers. This carborundum coil is partially what makes the Wasp such a competitive dab pen– and for such a fantastic price!

Ease of Use and Portability of the Wasp

The Wasp Dab Pen is very small, durable, and compact, making it super easy to transport. Users can throw it in a purse or a pocket and leave it there for a whole day and they would not have to worry about it breaking or leaking. The wax vaporizer has a large round button on the face of its exterior that is pushed to turn the unit on and off. Because this dab pen comes with a wireless USB charger, it can be charged virtually anywhere.

Users can purchase a wall adapter for cheap, or find a wall that has a USB port already built in. It charges fast as 1 to 2 hours. It will make a great travel companion for anyone in the market for a new dab pen. Should a consumer choose to, they can also purchase a fun silicone wax concentrate jar to make transporting mediums along with the pen even easier. It is neon tie-dye and comes in three sizes– small, medium, and large.

Similar Dab Pens on the Market

The Atmos Nano Wax Vaporizer Dab Pen is sold for a cheaper price than the Wasp. It is not as high quality as a pen, but it is a good deal for users who are looking for a cheap temporary pen.

It heats up in 5 seconds, which is slower than the Wasp, but still pretty fast. It only comes in black, and lacks the elegant pyrex glass mouthpiece that the Wasp has.

The K-Stick Supreme pen is another wax vaporizing dab pen that comes at a lower price than the Wasp. One cool thing about this device is that it comes in three unique colors– gold, rose gold, and a dark silver color. They are all very shiny though, and some prefer the matte aesthetic or the less flashy aesthetic of the Wasp.

These statement colors make the pen less concealable. It also has a 510 connection. Though it does have the advantage of added leak-proof technology, it does not come with nearly as many extra accessories and is not as high quality as the Wasp. In the world of vapes, users get what they pay for.

A Final Look at the Wasp Wax Air Dab Pen

The Wasp Wax Air Dab pen may not be the most expensive dab pen on the market, but it is one of the highest quality dab pens. It vaporizes waxes completely, being careful not to waste any precious drops and bits laying around in its tank. A discussed con of this vaporizer is its 900 mAh battery capacity. This is on the lower side of battery capacities in the vape world. 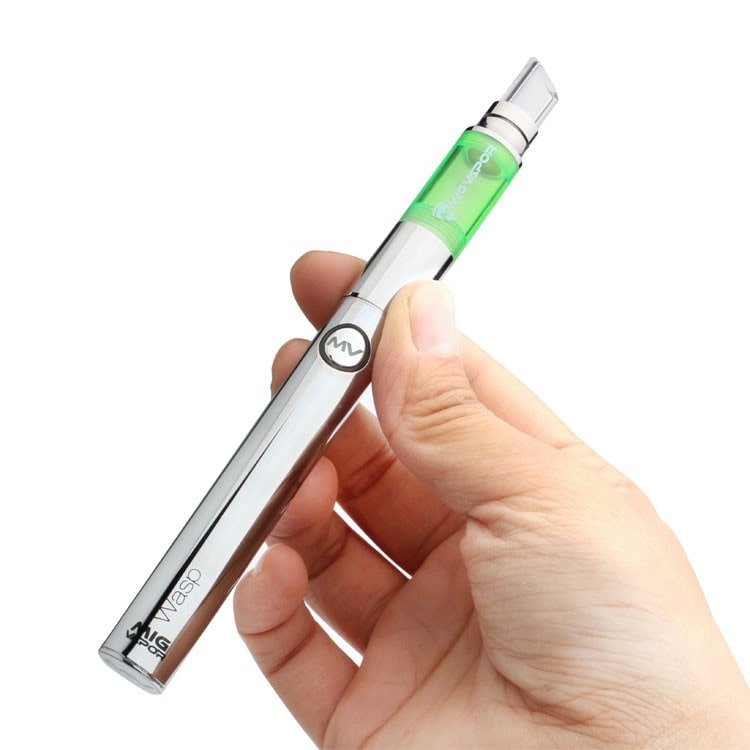 However, it is to be expected for such a small vaporizer. And it definitely makes up for this flaw with other features, such as its fast charging and heat up times, its 90-day warranty, and its carborundum coil. It is elegant, concealable, effective, and lightweight. Could one ask for anything more from their vaporizer pen?