The Best and Worst States To Vape, Ranked 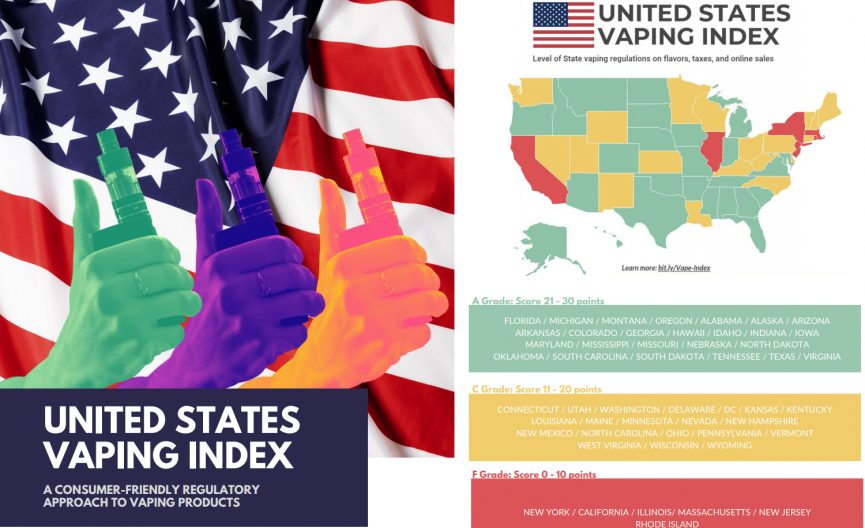 The Consumer Choice Center, a US-based consumer advocacy group, recently released a report looking at vape laws across the US. The group sought to rate different states on their current vape laws. The US Vaping Index, as the report is called, looked at several factors to determine which states were vaping-friendly, and which were not.

The report grouped the states into three different categories. They also assigned a grade to each state. The Index is a useful tool for vapers. It is a convenient way to understand the regulations in their state. It also provides vapers with a way to start campaigns to get anti-vaping laws and regulations overturned.

What The Index Did

The Consumer Choice Center looked at vaping regulations at both the state and federal level. But it compared how each state responded to federal regulations, mostly to see if that state furthered regulations against vaping or lowered them. The Index looked at three main categories to determine their rankings. These include:

Based on each state’s performance in any of these categories, they were assigned a score by the Index. If a state performed well in all three categories they received a score of between 21-30 points, which gave that state an “A” grade. The other scoring categories were as follows:
The Index is a comprehensive report as every state, including Washington DC, was examined. The Index did not look at pending legislation, like Michigan’s potential flavor ban. It also did not look at the laws of individual counties within each state. Instead, it focused on laws that were passed (or not passed) by statehouses around the US.

How States Compared to the Federal Government

The federal government does not have the power to impose further taxes than the federal sales tax. The Index looked at which states did impose further taxes on the sale of vaping devices, e-liquids, and other flavored vape products in their states. Whether they did or did not ultimately affected that state’s final score.

The federal government does not regulate online sales in any state. The rules regulating online sales are strictly the purview of state lawmakers. Again, the researchers looked at which states had either:

Best and Worst States to Be a Vaper

The Index ranked all fifty states including Washington DC (but excluding Puerto Rico, and US territories like Guam). The rankings were as follows:

The Grade “A” States

The states that received a grade “A” rating scored highest in all the important categories. The grade “A” states are a diverse group as well ranging from Alaska to Florida. They were also politically diverse. They were equal parts Republican-controlled and Democrat-controlled.

The Grade “A” states did not impose further flavor ban restrictions, like Florida. Nor did they make it difficult for vapers to buy their products. Vaping products were not overly taxed, beyond federal sales tax, and cost much less than in other states that heavily taxed e-cigarettes, even more than tobacco products.

The Grade “C” states were also a mixed bag. They stretched from Washington state (which imposed a tax on vapor products in 2019) all the way to Maine, which has a 43% excise tax on vapor products. Not surprisingly, most of the states with a “C” grade were the same states that imposed new taxes on e-cigarettes last year.

The CDC cited 20 states that did so in 2019. These states either imposed taxes on the sale of e-cigarettes or each millimeter of e-liquid or “consumable material” used by vapers. One Grade “C” state, Utah, even went so far as to outright ban direct-to-consumer online vape sales in 2019. Only licensed vendors are allowed to make wholesale purchases online.

The Grade “F” states, while small in number, also include the most populous state (California), as well as some of the wealthiest (New York and Massachusetts). California has led the way in all three categories – imposing new taxes on e-cigs, restricting online sales, as well as introducing new flavor bans.

The US Vaping Index is part of a larger effort by the Consumer Choice Center to relax or reverse vaping hysteria across the US, as well as around the world. The Center believes in the effectiveness of e-cigarettes as harm-reduction tools. But it also stresses the importance of giving consumers the freedom to access products they deem useful.

While the Index is not an official study and is not peer-reviewed, it is merely a way for vapers to understand the laws in their states. It helps vaping activists target the jurisdictions that are most anti-vaping and organize accordingly to either reverse or eliminate those laws through grass-roots activism.