I’ve always been a fan of Vaporesso products. They seem to pour months and months of research and innovation into their products that put them head and shoulders above the competition. The latest manifestation of Vaporesso’s science-driven ethos is the Vaporesso Target Mini 40W VTC Starter Kit, a miniature box mod that comes with a Guardian tank and a ceramic coil atomizer.

The mod itself is modeled after a joystick, with ergonomic grips and rubber patches to help with hold and comfort. The Guardian tank that the Mini comes with is leak-proof and child-resistant, or is that leak-resistant and childproof?

Well, either way, the tank also has an air intake valve on the top, in between the mouthpiece and the tank, which is only further evidence of the tank’s resistance to leakage. I had a lot of leakage problems with the Smok Mini precisely because of this problem: the airflow valves directly under the tank.

Every time I set the Smok Mini down the tank would leak, almost without fail. So, thank you to Vaporesso for removing this frustrating design flaw from the Target Mini. 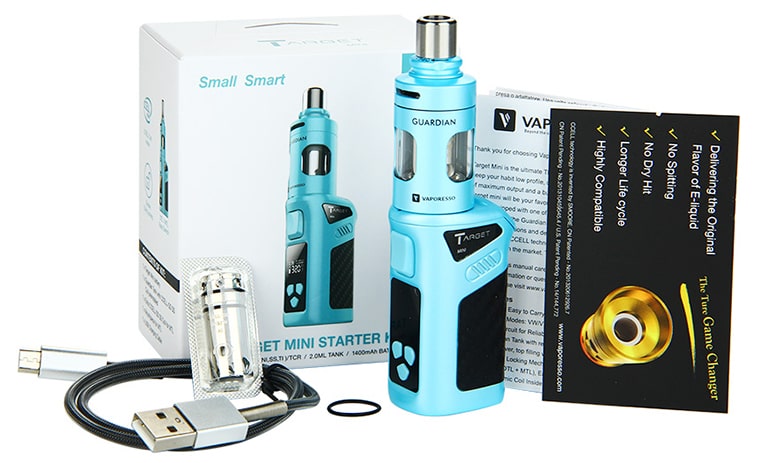 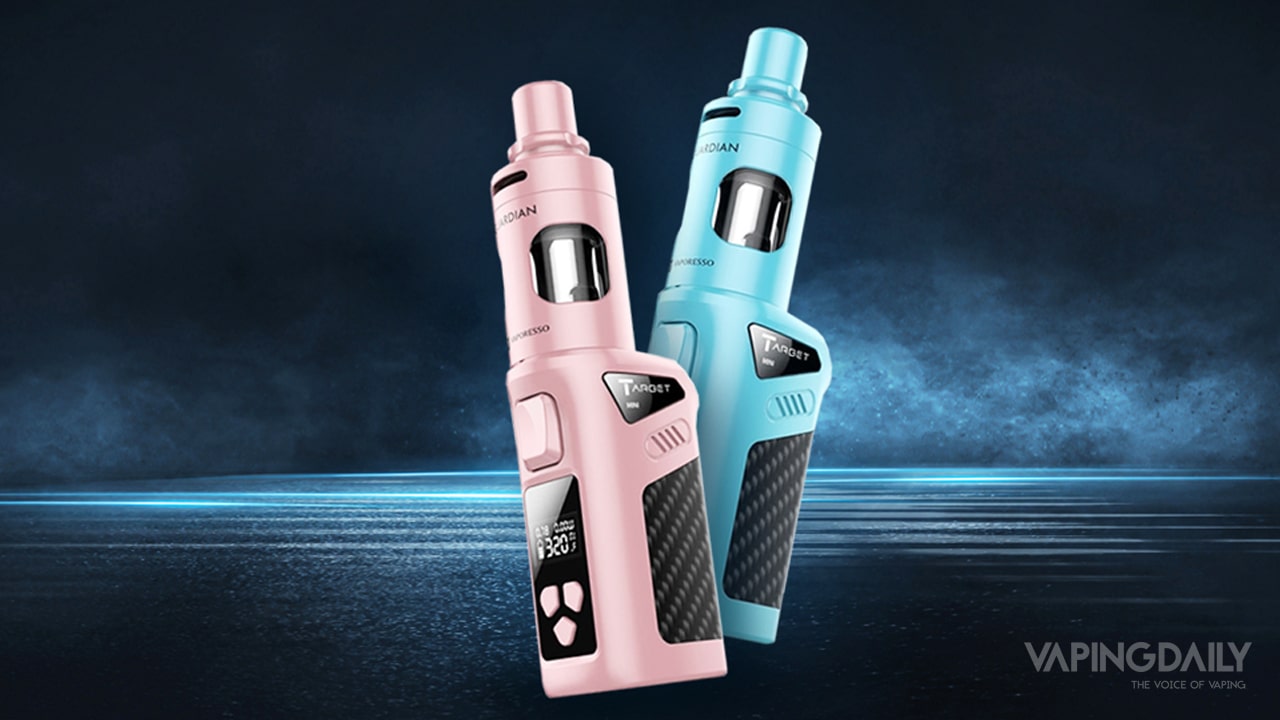 While some may have been put off by the Mini’s size, seeing the Vaporesso brand immediately told me that this was going to be a quality device. And I was not proven wrong.

How best to explain the size of the Mini, so you, dear reader, can easily visualize it? The exact specifications of the mod are 37 x 24 x 58mm, but if you are like me, those numbers don’t mean anything in your right-hemisphere brain.

So, I suppose the closest thing I can compare the mod to is a Kinder egg. Seriously. And that comes with the caveat that the Kinder egg might actually be bigger! The Mini is mini, but it still feels a little weighty, which is good, since it denotes that it is well-built with quality materials.

And it is. The outer casing of the mod is a mix of steel and zinc, so it’s incredibly durable, but that’s based more on the durability of Vaporesso’s other mods like the Target 75V.

The mod also features an OLED display that allows you to control the temperature, wattage, and resistance in the coils you are using. And, of course, you can also use the screen to check your battery levels. There are four

The grips and firing button are ideally located, and the mod does not “fit” into your hand; once you grip it, the thing completely disappears, save for the tank.

The Guardian tank is equally impressive in its design and appearance. The kit comes with two mouthpieces, one already installed onto the tank, which is for direct lung hits. The second mouthpiece is for mouth-to-lung vaping.

The tank has a solid outer build and shields the Pyrex glass tank rather well. I liked that you could see the ceramic coil inside of the tank; it was Vaporesso’s way of showing off the quality of the parts they include in all their devices.

Fill Up the Mini 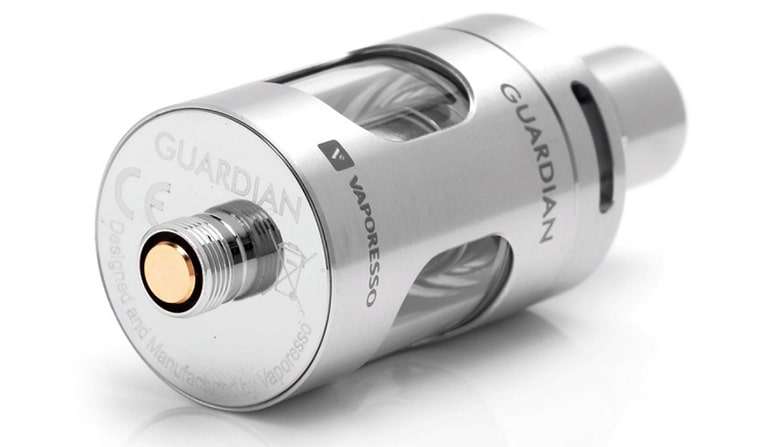 The Guardian tank gets screwed onto the mod counterclockwise, rather than the clockwise. The tank, being TPD compliant, features a childproof design that prevents it from being opened by curious children, which is why you screw the mouthpiece off the other way.

The tank has a top-fill design, and you need first to remove the drip tip and then the top cap to access the tank to fill it up. When screwing back the top cap, I realized I had the same problem I had with the Smok Mini, which was that I was turning the airflow valves open and closed, rather than closing the tank.

The Guardian tank had a similar problem but getting a better grip on the top cap solves it. Once you open the tank, you can fill it through the two fill ports on either side of the vapor chimney. The airflow valves turn right and left, but don’t make it hard to open the entire top cap to access the tank; you just have to turn them the same way you would with any other tank.

How the Modes Operate

Make sure you don’t lose your user’s manual for the Vaporesso Target Mini 40W VTC Starter Kit. It’ll come in handy to help you navigate all the button combinations and how to access special menus to change the resistance and temperature.

The Mini might be tiny, but it did take a little reading before you figure out everything you need to know. It definitely skews toward the more advanced and veteran vapers, but that’s yet another sign of how well-made Vaporesso makes their products.

Because the Vaporesso Target Mini 40W VTC Starter Kit offers such a customizable vaping experience, there is a lot you need to learn before reaching that level of customization. Apart from being able to control the temperature of your vape, you can also adjust the wattage and the resistance level of the coils you choose to vape with.

And then, there’s also the different modes that can vary between nickel, titanium and stainless steel, for whatever atomizer you want to use with the mod since it has a spring-loaded 510 thread.

And with those options (switching between metals), you also have built-in temperature control. Again, those are the more advanced features that the Mini has to offer (and they call this a “starter kit”?) that take some fiddling with before you can truly attain vaping nirvana.

Apart from all those more advanced features, to just turn on the device, you do the standard five-clicks-on/five-clicks-off, and the display shows you everything you can control or adjust to your specifications. The temperature can be displayed in either Celsius or Fahrenheit. And you can also invert the screen, so it shows upside down, which, I’m not sure what purpose that serves, but there you go.

Taking It For a Vape 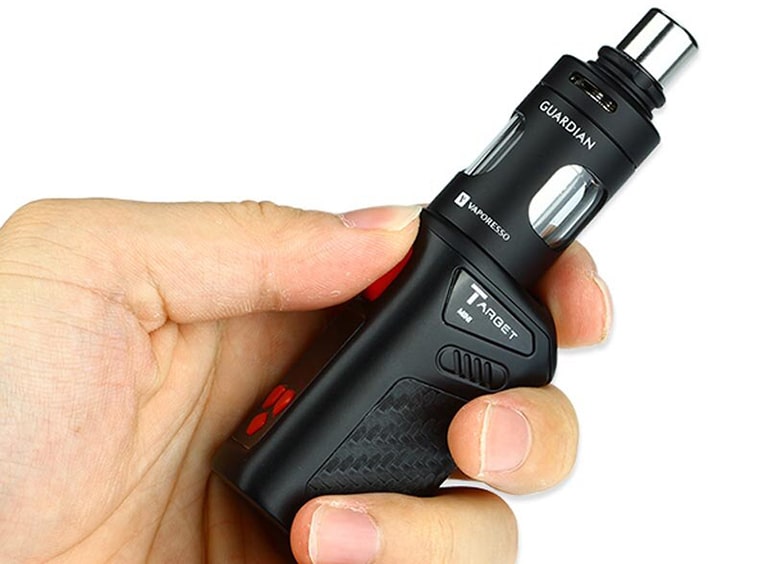 To test out the Vaporesso Target Mini 40W VTC Starter Kit, I decided on a higher VG content to get those bulbous clouds that a sub-ohm coil and a 40W device can produce. Fortunately, I was gifted some Black Note Adagio Havana Blend at the office, from my homegirl Anastasia, which came in handy for this particular device.

And, wow! I knew going in that the cloud production would be on par with the technical specs of the Mini and those expectations were exceeded. Everything about the Mini came together to deliver a phenomenal vaping experience.

The vapor was warm and full of flavor. I set the temperature at a mid-range 420F, and I felt the only the tobacco essence that made me feel like I was walking the streets of Old Havana. The vapor path on this device is clear of any of impurities.

The organic cotton wick and the coil and airflow (which I kept completely open) were all instrumental in giving me great vapor, but I didn’t detect any of those elements in the vapor whatsoever.

The Vaporesso Mini and the Market

The Vaporesso Target Mini 40W VTC Starter Kit will be hard to beat. It is so well-designed and thought-out, so well-made and machined, even the individual parts like the tank and the mouthpiece and the threading on the tank deserve admiration.

I know I’ve been disparaging the Smok Mini throughout this review, so I’ll stick with that. The Smok Mini had many problems, for me, at least.

It leaked like crazy; the leaking made all the surfaces slick, so it was hard to unscrew the top cap. I had to clean it all the time before I could do any refilling. It had the same features and functions of the Vaporesso Mini, like temperature and wattage control, but it was at least double the size and weight.

So, I guess you know where this is going already. The Mini takes it, hands down, just for the versatility, its size and the quality of the vapor production.

The options don’t seem to end with the Vaporesso Target Mini 40W VTC Starter Kit. The mod has stainless steel 510 threading. The tank can also take any standard 510 mouthpiece and as for the functions on the mod itself – temperature and wattage control, as well as resistance control, compatibility with three different coil types (nickel, stainless steel, and titanium). And did I mention the two mouthpieces included in the kit and the two separate coils? Oh, yes, I did. With all these options the Mini is a renaissance mod that can do anything.

The power output of 40W guaranteed a sustained vaping time of at least two days, but getting the Mini back to full power from a depleted battery took longer than I expected at almost three hours. Having swappable batteries would cut down significantly on this problem.

The size of the Mini might be the first thing you notice, but I put it second because its size belies the other amazing things that you can do with it other than marvel at how tiny it is. But, after you’ve discovered all of the features of the Mini taking it with you becomes the last piece of the puzzle.

The Vaporesso Target Mini 40W VTC Starter Kit is yet another hit in the Vaporesso product line that was built to impress. It touches almost all of the essential bases concerning delivering on power, vapor production, durability, and customizability.

While it took a while to get the Mini back to life, you were sure to get a consistent and customizable vaping experience that you could practically take anywhere. Only, despite its size and portability, the fact that the Mini is also sturdy and has sub-ohm capability means that despite your best efforts to stay discreet, the size and density of the clouds will inevitably draw attention.