Vaporesso Swag Kit Review: Swag Like You Mean It

The Swag kit, the Vaporesso newest box mod kit, is a full triple-threat in each category. First, it snuggles into the palm of the hand with its 2.9 x 1.8 x 0.98 inches dimensions and 64g weight. The Swag also features a different design aesthetic with the inclusion of an IML (in-mold label) face-plate that adds to its durable and easily grippable facade.

What’s the technical marvel that puts the Vaporesso Swag above the competition? The Omni 2.0 circuit board lets the user charge the mod faster with its 2A charging capability displays precise and multiple readings. In addition, it has many smart features that allow users to program their most important vaping settings.

Along the side of the mod, users will find the OLED screen, the firing button, and the mode selector button. The plus/minus selector buttons are on the device’s front, located close to the rest of the controls. 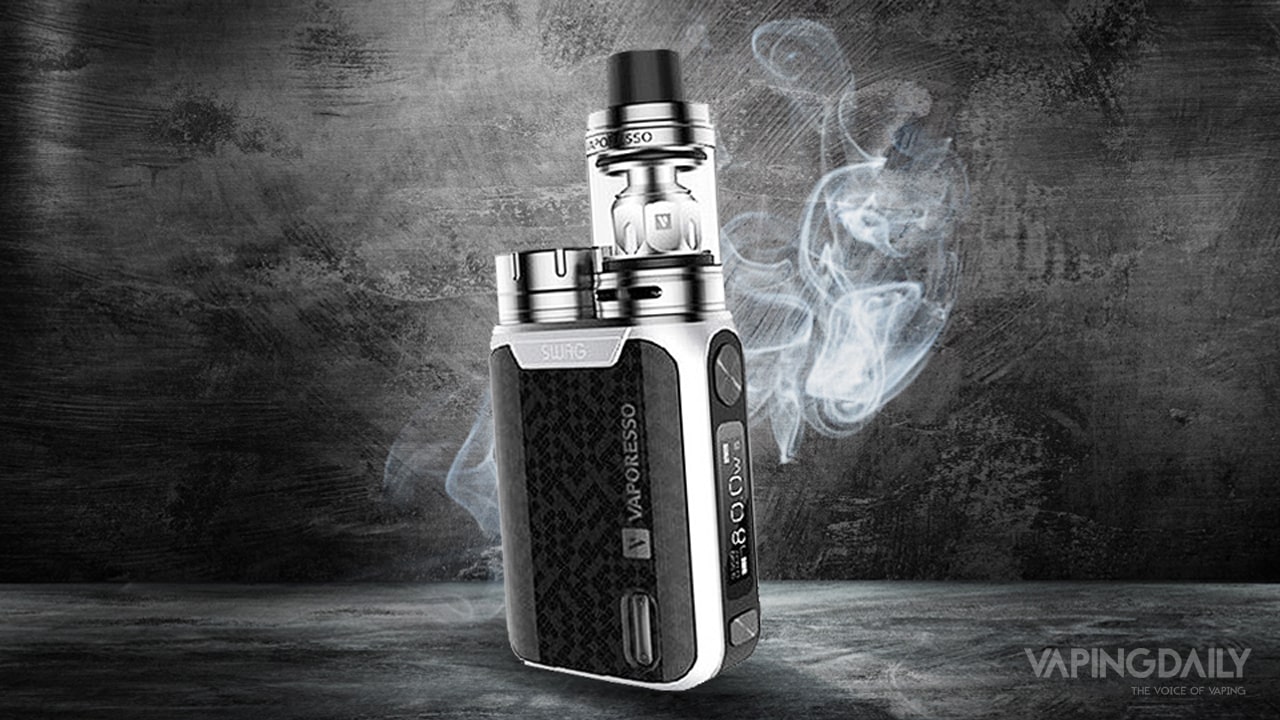 Despite being a Vaporesso tank, the NRG SE sub-ohm tank the Swag comes with recalls a SMOK design. It looks like the Big Baby or the TRV8 with the orange O-Rings inside. The chimney inside is slightly broad and looks like it would provide a considerable amount of vapor.

There are bottom airflow slits, along with a protruding 510 pin. However, the diameter of the tank only measures 22mm (0.98 inches). So Vaporesso decided to keep it small rather than go for that extra-wide tank. The 22mm tank is also because anything wider would not fit onto the mod, given its proximity to the battery top cap.

And, again taking a cue from SMOK’s top-fill tanks and the original NRG tank, the NRG SE has a sliding top cap that reveals the bean-shaped fill hole underneath. The top cap also snaps in and out of place for secure, leak-proof filling.

To turn on the Vaporesso device, click the firing button five times. If there is no atomizer attached, the OLED screen will display a “change atomizer.” When connected the NRG SE to the tank, the smart mode on the mod will automatically adjust the wattage to the attached tank, just like with the Revenger and the Tarot.

These options let users choose the power and temperature their vape begins and ends with each session. It also enables vapers to decide how long they want the mod to vape at their preferred temperature or wattage.

The Vaporesso also has three different vaping modes (high, normal, and soft). It depends on which coils vapers are used in the atomizer. So there are plenty of adjustable features on this Vaporesso Swag.

The level of customization available on the Vaporesso Swag. This is something that a brand like Vaporesso specializes in. Swapping out the GT CCoil, which vapes in between a range of 20-35W, is a flavor-chucker’s paradise. Especially when paired with the CCW function on the Swag. Feeling the flavor intensity gradually increases with every new inhale was revelatory. This box mod has a smooth dual bottom airflow control mechanism. It makes hits easy and, as the name would imply, smooth. This unit can also produce competitive clouds thanks to its ability to reach crazy high wattage outputs. The Vaporesso Swag Kit takes low-resistance sub-ohm vaping to a whole new level with its included 0.4 and 0.5 coils.

The iMini is only 2 inches long, making it super small and easily concealable like the Vaporesso Swag Kit. In addition, it has a neat build. However, it only comes in black, which is not nearly as fun as the Swag Kit.

It also only outputs 15 watts of direct output, instead of the impressive 80 of the Vaporesso. So though it is cheaper, it may not be worth saving the extra money for sacrificing quality.

The Demon Killer Tiny Vape Starter Kit comes at a lower price than the Vaporesso Swag Kit. However, though it has a similar build as the Swag Kit, its aesthetic is not quite as pleasing or sturdy.

It does come with a neat design and in cool colors though, similarly to the Swag Kit. Also, Swag has more modes than the Demon Killer.

The Vaporesso Swag has a beautiful, compact form. It is great for a portable device and durable with its aluminum alloy casing.

The tank and coil system works magically in cooperation with the many features and customizable vaping options on the Swag. Probably the most fun aspect of this unit is its aesthetics. The artwork stickers purchased for this unit are cool enough to be framed and put on a wall. In addition to this awesome look, this unit is also incredibly powerful. Consumers can get the best of both worlds from the Vaporesso Swag Kit– looks and performance.

20 comments on “Vaporesso Swag Kit Review: Swag Like You Mean It”